Why do we read comics?

It’s a question that fans always have to answer. For most, it’s a simple answer — because it’s fun. Comics offer a break from feeling small and insignificant in the daily grind. We can forget about the jobs we hate or the life that isn’t quite what we want right now. Instead, we can see solar-powered gods fight monsters. We see men survive radiation and emerge with fantastic abilities.We can even see people dress up in Halloween costumes and keep their streets safe. We see the life we wish we could lead and the people we want to be. At the end of the day, comics offer us escapism, a chance to escape reality as we know and see the fantasy we wish we could have; more importantly, they show us heroic, noble people we wish we could be.

So what happens when reality sneaks in?

For all their escapism, comics have shown us glimpses of reality’s dark side. Politics, urban decay, struggle, and all kinds of real-world commentary have made their way onto the comic page. Yet, one glimpse hits more then any other — disease. It’s the one thing that can happen to any person at any time, no matter status, job, or location. But that shouldn’t be seen in comics right? They are meant for escapism, for taking us away from the harshness of reality. Sure, they might dabble in the real world from time to time, but in broad ways that don’t hit at a personal level. These are stories about super-powered gods, and gods don’t get sick… 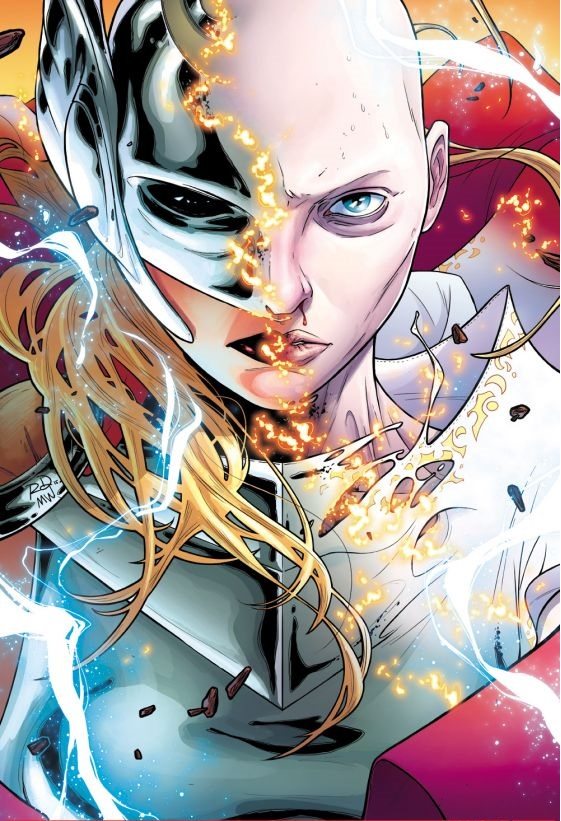 Except when they do.

Escapism or not, comics have shown us the horrible truth of how much sickness and disease can affect even the strongest person. THOR is the best example of this in comics right now. Since Jane Foster (who was fighting cancer) picked up Mjolnir, we as readers have been treated to the classic godly and otherworldly thrills that only THOR can provide. We’ve also seen a sickly, dying woman sitting in a chair, having poison pumped into her body to kill the poison that’s already there. Worse, we see that same woman be a hero, only to learn that doing so is actually killing her faster. I’ve watched a loved one get sick from cancer. I watched him go through treatment, have a period of hope, and then I spent months watching him wither away. No matter how many battles Thor may have, Jane Foster getting chemo is what I remember when I read these books. What they show is real, and I worry about how I will handle the final issue.

READ: Curious about Jane Foster as Thor? See our assessment of her debut.

THOR isn’t the only modern comic with the implications of sickness. JESSICA JONES, both in print and on Netflix, stands as a devastating portrayal of the mental strains of PTSD. Jones is a woman with enough strength to punch through walls. Yet, for so long, all it took to undo her was the merest mention of Zebidah Kilgrave (the Purple Man). Unlike so many vaudevillians who punch, Purple Man attacks the mind. He literally can make anyone do whatever he says without hesitation. Then he found Jones. 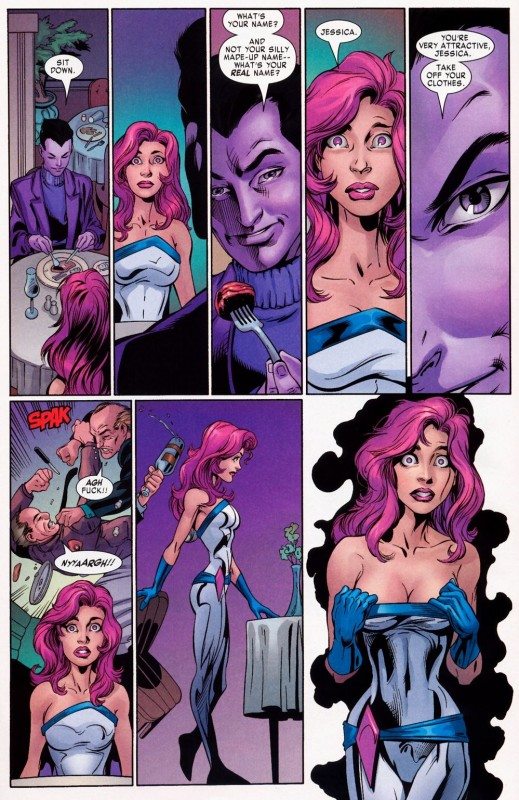 For months on end, she lost control of her own body. Whatever Kilgrave wanted, she had to do. It’s the most all encompassing rape ever conceived, and the effects never truly leave. In both versions of the story, Jones leaves any hope of being a superhero and starts a private investigation business, while suffering the after effects of her ordeal. Alcohol becomes a crutch, and so does a rough, no-cares, personality that only masks the fragile parts underneath. It’s the horrible irony that a woman with such strength is reduced to panic attacks and hallucinations at the merest mention of Kilgrave. The very idea he may be coming back is enough to send her packing to run halfway around the world. Just like with THOR, those are the images that stick out more than the super heroics.

Marvel isn’t alone in this either. DC has had its fair share of real-life diseases in comics. One example that always stuck out to me was Mia Dearden (the female Speedy) being HIV positive. Even more surprising is how DC chose to explain it — not by a faulty blood transfusion, but by Mia being forced into child prostitution. Even after her rescue by Green Arrow, DC kept up the realism — Mia was shown taking AIDS medication and suffering the side effects, as well as all the danger involved with her being injured in battle. Then there was the big decision to write a story about Superman having cancer. ALL-STAR SUPERMAN is about DC’s greatest hero being infected with super-solar radiation by Lex Luthor and having a year to live. Granted, this is an imaginary form that sounds like a super-villain’s plot, but DC still did a story where Superman got cancer. So why do we as readers accept this? Why do we want to see the world we use to escape have these terrible reflections of reality? Why do readers have to see the reality of chemotherapy and panic attacks and antiretroviral drugs? Why can’t heroes just be heroes?

The truth is, as much as we enjoy escapism, we eventually have to come back to reality. In reality, these diseases do exist, and they seem like big, terrifying forces that we don’t understand and will ruin our lives. When readers see a realistic portrayal of cancer and HIV treatments, and PTSD coping methods, it defines those fears. When fear is defined, it can be understood, and eventually, it can be overcome. More than that, it shows us that people who have these conditions are still just people. They want to live their lives despite the struggles they have to endure on a daily basis. So that cloud of fear is replaced by sympathy and compassion for those that deal with these conditions. 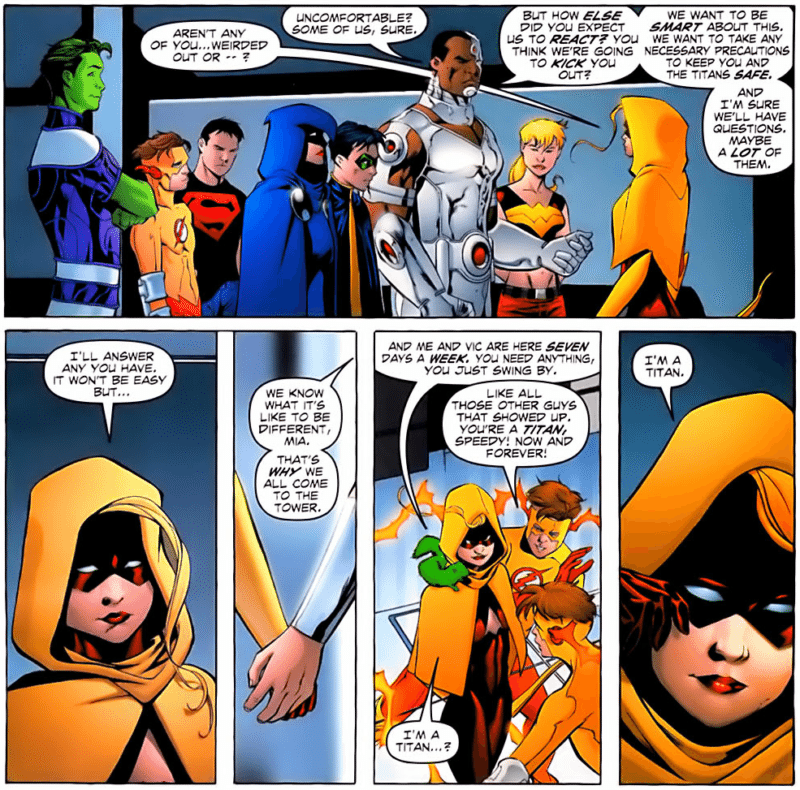 And that brings us back to the heroes. Readers gain new understanding from seeing their heroes deal with disease, but that’s not all they see. Jane Foster knows that she is dying, and that being Thor is speeding up the process. Yet she has no hesitation in swinging the hammer and saving lives. Jessica Jones is terrified of Kilgrave, but she forces herself to stay and face her fear so no one else has to suffer what she did. Mia is a hero despite the danger and when she fearfully reveals her condition upon joining the Teen Titans, they respond, “We have questions, but we’re not afraid of you.” Superman, when he learns he’s going to die, spends the last year of his life improving the world around him. So why do we read comics that show us people dealing with disease, hardship, and even their own mortality?

Because comics show us the people we wish we could be.