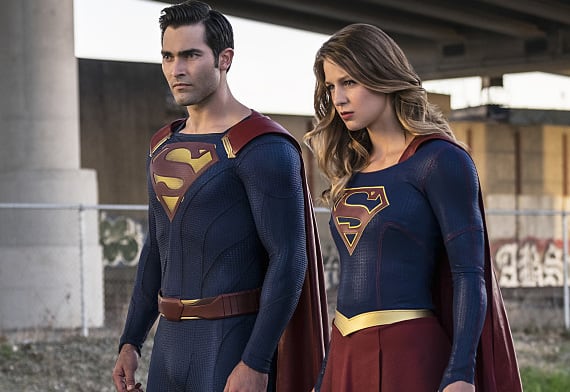 The second season of SUPERGIRL is already three weeks in and so far, it’s a great start. Last year, when I caught wind that the ARROW-verse creators were developing a SUPERGIRL series I was ecstatic. My mind was reeling, thinking of the many possible crossovers with its sister television series. This Fall season, the show moved to The CW, sharing the week with its DC family. With this move across networks, we ask how the tone will affect the story and the character this season.

When I saw the first episode last year, I can say I genuinely liked it because it wasn’t THE FLASH or ARROW. It was something brighter and more uplifting. Melissa Benoist, who plays the titular character, brings life to the small screen, instead of the gritty, brooding characters we’ve gotten through the DC line-up. You may say, what about THE FLASH? Initially, THE FLASH was like that but happened to follow in ARROW’s footsteps, becoming darker and grittier. Five episodes into season one, SUPERGIRL was pushing the idea of “girl-power” or the more political term, feminism.

Now, it’s not problematic to have that in any medium, but what seemed inadequate was that SUPERGIRL would force feminism down the viewer’s throat. It wasn’t subtle. In the pilot, Kara is against the idea Cat Grant (Calista Flockhart), her boss, dubbed Supergirl “Supergirl” instead of Superwoman, seeing it as anti-feminist. Then in turn Cat reciprocates that there is nothing wrong with the word girl; that the word is synonymous with the word woman. In another example, it’s mentioned whether she’s being tested because she’s a woman and not a man; an unnecessary drawing of attention to the inequalities of gender.

At the time, compared to Marvel’s AGENT CARTER, SUPERGIRL wasn’t handling the ideology fittingly. AGENT CARTER displayed feminism with subtlety as SUPERGIRL did not. For Agent Carter it made sense to address the inequalities of both genders because of that specific era. Instead of holding the viewers’ hand, we see Agent Carter do the opposite of what she was told to do, instead of her complain about the men she took matters into her own hand and completed her mission(s). Throughout season one of SUPERGIRL, it struggled to illustrate that a woman is in every way equal or better than a man. Over the summer, it was announced that Tyler Hoechlin had been cast for the role of Superman/Clark Kent. Bringing out Superman for the first two episodes of the current season was the best way to display feminism.

In the SUPERGIRL season two premiere, we find our heroine going through her normal life and then thrown into a scenario where she and Superman are both needed to handle a crisis. The second episode did a superb job in demonstrating that Supergirl is equal to her opposite (not Bizzaro Girl). Supergirl fighting Metallo, who is typically a Superman villain, was a great choice. Throughout season one she was compared to Superman on how bad she was doing her job as a superhero. It was hard to tell whether she was blamed for her femininity or the fact that she was a neophyte. Introducing Superman is a great way to show that Supergirl is the same as he is. The show-runners could have easily made Superman’s heat-vision red but chose to keep it blue as Supergirl initially introduced the ability. All these instances prove that women can do anything a man can do without telling the audience she can, she just does them. In the scenes where Superman is with Supergirl, they practically do the same thing. Remove Superman and the cloned villain, Supergirl would have performed just as well as she would without him.

The best way to go about feminism is to show it and not have everything on the nose. Shows such as THE 100 or JESSICA JONES do an excellent job in that area. To further women’s progression in the industry, be it fiction or nonfiction, we need more women to take on the mantle. According to Variety, JESSICA JONES’s next season will be directed entirely by women, which is a step in the right direction. With that kind of positive progression, the show-runners can take note and hire more women to write or direct episodes. THE 100 has done feminism right by having many of their female characters always taking the lead in authoritative roles. Notably, women are seen as figure heads or superior to men without bring attention to feminism. SUPERGIRL’s first two episodes of this season seem to foreshadow the future of the series, affirming that Supergirl is more than a gendered hero but a hero in all its meaning. That’s the most important thing in order to positively move forward by making the audience aware of the social issues but not complain about it but rather do something about it.