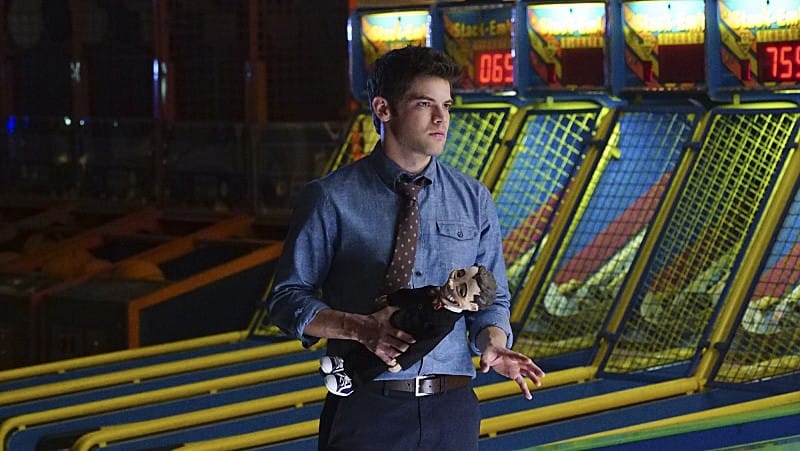 SUPERGIRL S1E10 “Childish Things” is here with the in-depth look into Winn’s past that we were all clamoring for… I guess. I mean with the name Winslow – or Winn – it was inevitable, and while the Toyman might be a poorly conceived villain in this story and James might have turned into a bit of an ass this episode, there are still some good things here… Cat and Lucy are having fun at least! Well, let’s just get into the episode.

As previously mentioned, this episode’s main villain is the Toyman, who we watch break out of prison at the start of this installment. Meanwhile, Cat is trying to get Lucy to become her counsel at CatCo, who employs almost exclusively female CEOs, which James is weirdly unhappy with – I’ll come back to this later, trust me. But back to the A-plot, Winn is being stalked by what is revealed to be his estranged father the Toyman, while also struggling more than ever with… just all of the emotions.

READ: Need to catch up on SUPERGIRL? Check out our review of S1E9 “Blood Blonds”!

I don’t want anyone to think I am dismissive of him, though, Jeremy Jordan totally nails this episode. After showing off his comedy chops along with Calista Flockhart for the first half of this season, he finally gets the chance to give more to Winn than just: I am funny, and I am in love with Kara. Speaking of being in love with Kara, I think that this is the best love triangle love confession, there really is no easy way to describe it, that I have ever seen. Most of the time, I get very annoyed with these confessions because they do exactly the opposite of what this episode did. When Kara tells him that it’s not a big deal I loved that he responded, “It is a big deal,” because it is. It always is, and both the writers and Jeremy Jordan in that scene nailed exactly what that situation really means to all parties. No one is just going to move on from this or just stop feeling in love by the end of the episode. I hate to admit it, but actions like Winn kissing Kara and being rejected have consequences.

Another excellent aspect of this episode was not just the final conversation that Winn and Kara had, but all of the moments that they shared throughout the episode. Winn and Kara do have some chemistry, especially in the scene where Winn tries to kiss her, and it gets you deep down because Benoist and Jordan sell it. You feel that deep bond between them, and what’s so painful about it is that you can tell that they love each but in very different ways. While this chemistry is one of the reasons why the love triangle angle keeps falling apart, the main problem is that James Olsen is becoming less attractive as a character by the episode and his girlfriend, Lucy Lane, is becoming more and more awesome. Lucy’s short scene with Cat is very sweet, and their immediate business woman connection is a breath of fresh air. Meanwhile, James is being beyond weird about Lucy working there, which is obviously due to his conflicted emotions for Kara. Therefore, James is hurting both his awesome girlfriend Lucy and his super friend Kara, which means that James… you’re on my list. Don’t hurt my girls.

LISTEN: When you think about X-Men who do you think about? If you said Storm, then you’re in luck! Check out our podcast on one of the X-men’s most popular characters!

In addition to all of the storylines I have already mentioned, there is also an ongoing storyline here that focuses on how evil Maxwell Lord is, and how afraid Hank is of using his Martian powers. As you can tell, there are a lot of storylines and sadly some of them just aren’t as good as others. James’ storyline is a huge detriment to him as a character, and Hank and Alex’s story doesn’t quite hit the same highs as Kara and Winn’s. However, Kara and Winn’s story is so good that it makes up for some of the dead weight and exposition that the episode has to drop about Maxwell Lord to keep the season-long arc going. Overall, SUPERGIRL is… fortunate to have a great guy like Winn around, honestly.

Winn’s constant fear that he would become like his father was one of the most heartbreaking things about this entire episode, which was impressive considering we’re never given enough time with the Toyman to actually understand his craziness or his relationship with Winn.

As time goes on, Lucy just becomes a cooler and cooler character. I just love that she’s smart. The girlfriend of a man with a wandering eye is usually portrayed as stupid and Lucy is definitely not stupid, which she totally proved when James tells her he was just jealous of how awesome Lucy’s job is, and she responds, “Oh, and here I was thinking this was about our relationship,” sarcastically.

Cat once again turns in an amazing performance when she gives Lucy a career speech. I want her to mentor me. It would be awful, but I think I would be better for it.