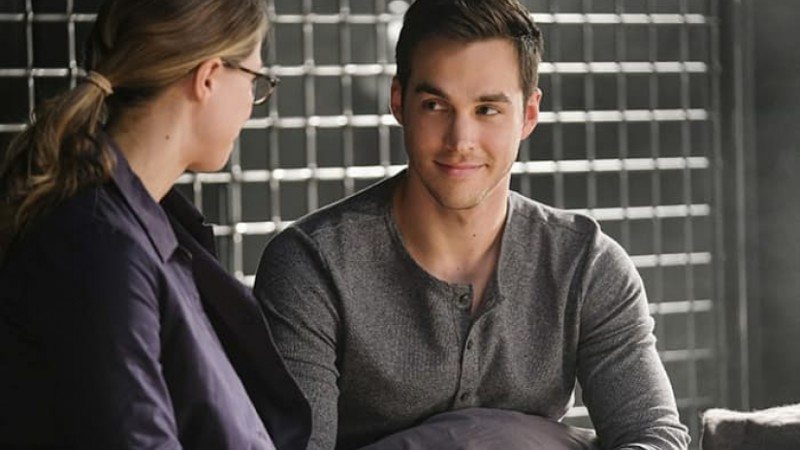 This week’s episode was enjoyable but felt like something else was brewing underneath season two of SUPERGIRL and the rest of Arrow-verse. It could be a reach but with recent news of YOUNG JUSTICE’s return for season 3 on Netflix, I can’t help but notice YOUNG JUSTICE characters are emerging throughout the CW DC universe. What triggered this notion was when Cadmus drove up and kidnapped Mon-El (Chris Wood) at the end of the episode. As we know Cadmus is a major adversary to the sidekicks in YOUNG JUSTICE. Kid Flash (Keiynan Lonsdale) and Miss Martian (Sharon Leal) also making appearances could be foreshadowing a YOUNG JUSTICE arc for future crossovers on The CW.

In the early years of ARROW, Blüdhaven was mentioned quite a few times, and any Nightwing fan would know that that’s his home base. Mentioning this city led us to believe that Dick Grayson could make a debut in ARROW. With Superman returning to television after many years on the big screen, is there hope for a Batman stand-in like Grayson to make a debut in the shared universe? This brings us back to the point on why it’s suspicious of the Young Justice characters being quietly assembled in SUPERGIRL the rest CW DC line-up. It’s wishful thinking for Grayson to appear on ARROW and seems unlikely that they would bring him in because Oliver Queen has already assumed the role of a teacher.

This season of ARROW, Oliver has taken a handful of students to protect Star City, and like Nightwing, teaches them the fundamentals of team-work. In YOUNG JUSTICE season two, Nightwing looks out for Tim Drake (the third Robin) and grooms him for the leadership role of “The Team”. Oliver isn’t grooming anyone to be leader of team Arrow, but he is specifically hard on Wild dog (Rick Gonzalez), because he’s a troubled sidekick similar to Jason Todd and Batman. Oliver could be overly strict with Wild Dog preparing him to be a his right hand just as Diggle is. When Oliver’s new team is able to function like a well oiled machine, they could join up with the other sidekicks in the Arrow-verse.

Miss Martian’s debut this season initially put her at odds with J’onn J’onzz, but she is hiding the fact she is white martian witch was a big deal in YOUNG JUSTICE. Assuming her true identity is revealed, J’onzz won’t be forgiving because of last season’s attack from a white martian. If J’onzz comes to terms with her being a white martian, Miss Martian would have the potential to be a part of Supergirl’s team and then be a part of a future pseudo-Young Justice team.

Mon-El takes the place of Superboy when Cadmus kidnaps him for unknown purposes. Cadmus will probably either clone Mon-El or more likely brainwash him making him similar to what transpired with Superboy in season one of YOUNG JUSTICE. In SUPERGIRL, Cadmus’ sole purpose is to protect the Earth from aliens. To achieve that goal, Cadmus would utilize Mon-El to replace Supergirl after they take her out. That was a similar logic to what Project Cadmus from YOUNG JUSTICE had by creating Superboy to replace Superman. Mon-El just got used to the idea of helping people and now Supergirl would have to fight her pupil.

If Wally gets his powers, he could have his own plot similar to how Kid Flash in the YOUNG JUSTICE series had to race across America to deliver a heart to save a dying girl. Wally currently seems out of place in FLASH, so giving him abilities and putting him in life and death situation would develop his character much more. There’s a possible scenario where Wally could travel to Earth-2 and partner up with Jesse Quick (Violett Beane), gaining experience fighting crime. While Wally’s gone Bart Allen would take up the mantle as Kid Flash like in the Infinite Crisis Event. With Both Barry and the team from LEGENDS OF TOMORROW having disturbed the time stream could incite a Final Crisis Event. After spending some time in Earth-2, Wally would return forming the Young Justice team with Mon-El, Miss Martian and Green Arrow’s new team in a New 52-like universe.

Five Reasons You Should Watch Young Justice (on Netflix)

The end of SUPERGIRL this week made me realize that maybe, after the first CW DC crossover, the next crossover has the potential to use YOUNG JUSTICE elements. Now, I’m not saying a live version of Young Justice series will happen but more of a homage to the Cartoon Network series. It would be great to see the YOUNG JUSTICE characters interact or even save the titular superheroes from The Legion of Doom just as the Young justice team saved the Justice League. For now, it may be a coincidence, but still is a nice reminder of the original Young Justice team.