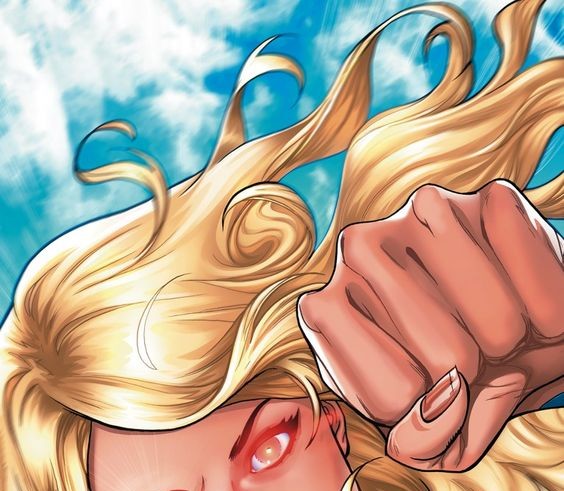 SUPERGIRL REBIRTH #1 ties together some of the loose ends from the New 52 while incorporating elements from the hit CW show. Keeping in line with the theme of rebirth, this issue centers around the rebirth of Supergirl’s powers. In a last ditch effort to restore Kara’s powers, Cameron Chase launches Kara into the sun’s core in a ship equipped with a Phantom Drive. This plan restores Kara’s powers while also releasing Lar-On, a Kryptonian with Red Kryptonite sickness.

READ: If you haven’t seen the show, check out our review here!

Since the issue has a lot to resolve as well as introduce, it is jam-packed with information. For this reason, the amount of explication in the issue is understandable. However, at times it leaks into the dialogue and makes certain interactions feel unnatural. For example, during a conversation with Supergirl, Cameron Chase recaps Supergirl’s deal with the D.E.O. for the reader’s benefit. Of course, Supergirl already knows all of these details, so it seems strange for Chase to repeat this information. That being said, Steve Orlando still handles all of this information really well. He manages to cover a lot of ground while keeping the story from getting mired in explication. 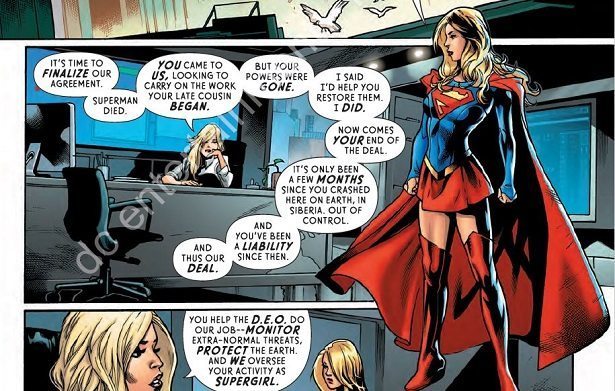 Furthermore, Steve Orlando’s characterization of Kara Zor-El is perfect, and one of the strongest moments in the issue is Kara’s fight with Lar-On. In just a few pages, Orlando is able to establish a foundation for the character that makes her complex and unique. She is lonely and aware of her status as an outsider, but hopeful for change. She is powerful, but empathetic. Orlando also takes this opportunity to provide a nice contrast between Kara and her father Zor-El. The issue opens with Zor-El’s utilitarian solution to quarantine Lar-On to the Phantom Zone. Later on, Kara is the one who has to deal with her father’s mistake, and unlike her father, she seems to have learned from this mistake. This scene establishes her as a hero worth rooting for, while keeping her relatable.

READ: Want more Supergirl? Check out this piece on the theme of identity in the hit show!

Another way Orlando succeeds at developing Kara Zor-El is through her interactions with her adoptive family the Danvers. Kara’s new family seems to be another nod to the hit show, and it was definitely a smart choice. Kara’s interactions and playful banter with her new family provides humor as well as a chance to show Kara assimilating into her new life. 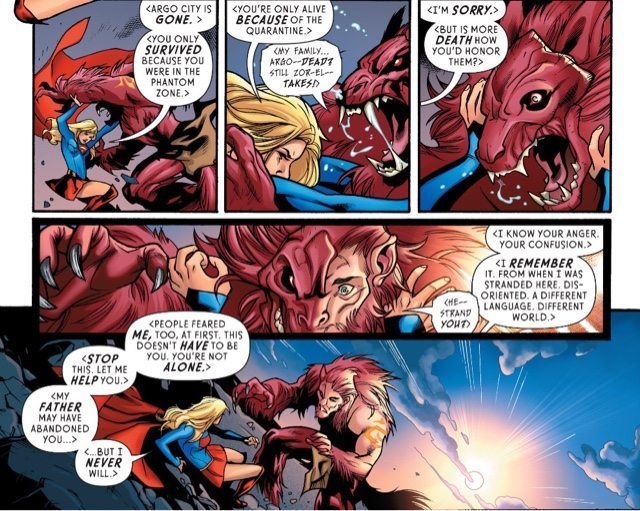 As for the art, Emanuela Lupacchino seems to have also drawn inspiration for Kara’s new suit from the TV show, and it looks a lot better than her New 52 suit. Lupacchino’s artwork is fantastic, and she never sexualizes Supergirl by forcing her into awkward poses. Supergirl always looks natural and powerful. I also felt that Lar-On’s werewolf form could have looked cheesy, but Lupacchino’s design for him is actually pretty cool. The only issue is the fact that sometimes Kara and Chase look too similar. If Kara wasn’t wearing her suit, I would have a hard time telling them apart.

Overall, Orlando and Lupacchino succeed at taking elements of the show and putting their own twist on them. The end result is a first issue that embraces the show’s optimistic tone without being too indebted to the series. All in all, it was a strong debut for the Girl of Steel.