SUPERGIRL Episode 2 is here and picks up right where we left off, Cat’s interview with Supergirl. Will Kara survive or will Cat’s “supervillain interviewing powers” take her down? Let’s find out, shall we?

Kara is not killed by Cat’s expert interview powers, but she does accidentally reveal that Superman is her cousin. This leads to Cat’s self-imposed writer’s craziness, which Kara says people schedule vacations around, while Kara deals with one of Superman’s foes, Reactron. (And if you’re wondering who gave him such a dumb name, it was Jimmy aka James Olsen.) Can Kara face someone who bested her cousin many times, and will Cat finish her article? Spoiler alert: totally.

READ: Love comic book TV? Check out our review of the most episode of THE WALKING DEAD!

I don’t want to say that SUPERGIRL has cousin issues, but it is definitely starting to have some Superman issues, to say the least. I mentioned last week that I hoped the show would diverge after putting the final nail in the coffin defining Supergirl in relation to Superman (Kara’s lines in particular: “I don’t want to be a hero like him” would have been a great way to end the comparison). However, the differentiation rages on and while it does lead to some extremely touching moments, Kara’s textual conversation with her cousin at the end brought tears to my eyes, it is frustrating that a show that likes to emphasize so often that it is telling Kara’s story is starting to get a little too defensive. 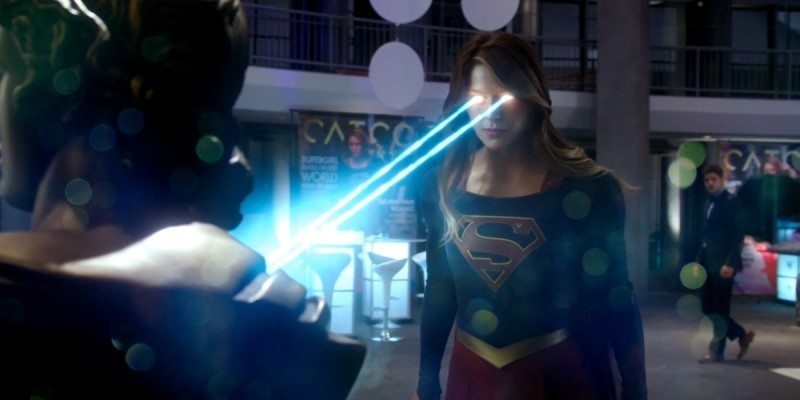 READ: Catch up with SUPERGIRL by checking out last week’s review!

Despite this, I still enjoyed this episode immensely. Winn’s shock and enjoyment at discovering that Clark Kent is Superman is particularly adorable, and Cat once again has some amazing lines (I would say that her lines are reaching a level where I could call her the Schmidt or Cookie of this show for EMPIRE and NEW GIRL fans out there, but I understand that those can be some dividing references, so please don’t take away from the character of Cat if you hate them.) And once again this show depicts an utterly wonderful relationship between Kara and Alex. They’re joking about the way Cat views Supergirl versus the way she views Kara can’t help but bring a smile to my face. The relationship between Kara and James is also extremely cute, but I have to say that personally I’m a Winn fan. (I know I will lose the bet on who Kara will date, but I just can’t resist Jeremy Jordan’s cute little face.)

An interesting addition, that should be watched as the series goes along, was the first real introduction of Maxwell Lord. Not really a villain particularly created for Supergirl, most of his dealings were usually with Superman and Wonder Woman, I think it is now very safe to say that SUPERGIRL will go the route of shows like ARROW, taking Batman villains and integrating them because they can. It has worked extremely well within that show to establish the Arrow, and it seems to be an excellent decision for SUPERGIRL too. Even in just the last 16 hours or so that this show has come out there are already theories about Lord having a more explicit connection to Reactron and an overarching plot for domination in his back pocket. Even with just the few scenes that Peter Facinelli is given in this episode, which are played beautifully by the way, he already establishes himself as a smart, but ruthless business man that will take what he can get. He’s a schemer, and it will be particularly interesting to see what he has coming up for Supergirl. 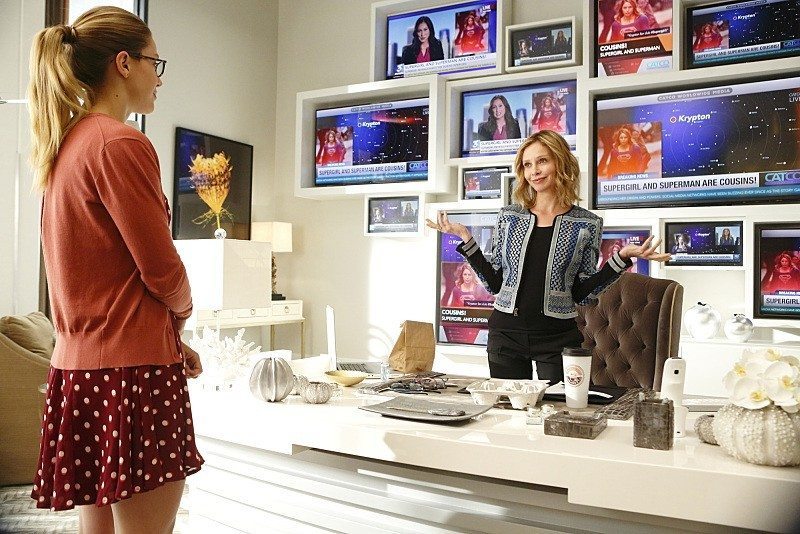 Overall, while this episode didn’t quite reach the high heights that the first two did, the ending was was still impactful, and Kara is still a really fun character to watch fly around. She is strong, and she is going to do this thing on her own (Maybe even defeat all of the villains that Superman doesn’t have time to fight or defeat because he’s too busy being stuck in 2 hour long films). Fly on Supergirl. I’ll be waiting for you to come back again next week.

Kara: “She’s like a super interviewing villain.” That’s why she gets paid the big bucks Kara.

Cat: “It’s like riding a bike, or severe childhood trauma. You never really lose it.” I don’t think a commment is required for this one.

Maxwell Lord: “Twice in two days. I should put you on the payroll as a bodyguard.” A bodyguard who you don’t credit as saving you to the press… I see you, Maxwell. And I am not pleased.

Winn: “Well, you could, um, repay your debt right now. Dance with me?” Oh, baby. You’re gonna get crushed so hard. Don’t do this to yourself.