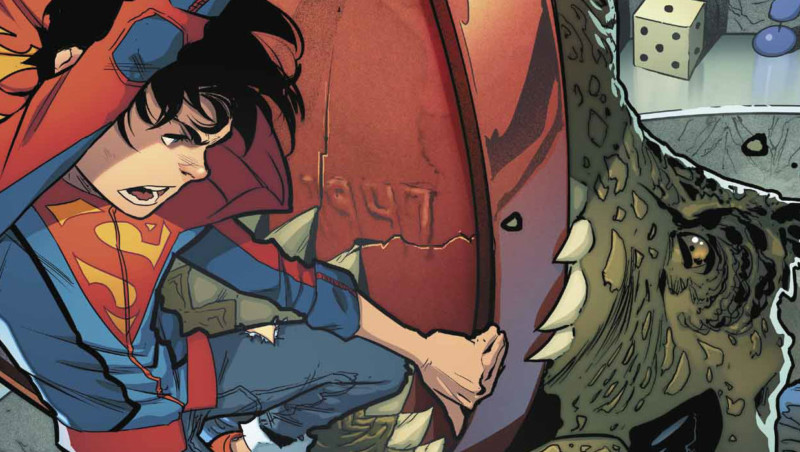 For a comic called “Battle in the Batcave,” SUPER SONS #5 has very little Batcave battling. It does, however, feature an aggressive contest of wills in the Batcave between Damian Wayne (Robin) and Jonathan Kent (Superboy). After a four-issue arc in which the two young heroes reluctantly teamed up to take down Kid Amazo, the resentment between them is about to boil over. It results in a big smackdown that resolves rather quickly. Nevertheless, it features these two highly enjoyable characters at their conflicted best. SUPER SONS #5 caps off its first arc with witty banter, big personalities, and colorful clashes.

SUPER SONS #5 begins with both of our heroes grounded and bitter about it. Fueled by his anger, both at being grounded and at having to move from the Hamilton farm to the bustling Metropolis, Jon Kent ditches his parents. He winds up at the Batcave, where Damian Wayne fumes from his own combustible boredom with being cave-benched. As the two begin a war of personalities, the conflict quickly escalates into a big superhero brawl. Ultimately, they’re able to put their differences aside. They realize that, if Batman and Superman can get along, maybe they can too.

Peter J. Tomasi excels at writing characters. He uses dialogue to really bring out their personalities. It’s worked wonders over in SUPERMAN, where dramatic storytelling backs up the great characterization. In SUPER SONS, the lighter nature of the book allows Tomasi to run wild. He lets his characters release their personalities, taking them in unpredictable directions. Character defined the first four issues, in which Jon’s and Damian’s disagreement over how to conduct their search for Amazo fueled much of the conflict. And personality is more prevalent than ever SUPER SONS #5, where all of Damian’s and Jon’s built-up animosity combusts into their first real duel. With Damian’s constant baiting and Jon’s emotional turmoil, the characters realistically oppose each other as polar opposites.

Tomasi’s dialogue is great fun with Damian and Jon throwing the usual jagged-edged barbs at each other. However, the supporting cast creates most of the humorous moments. Their exasperation at the hormonally charged super-tweens reflects our own observations, helping to remind us that this book is for adults too. One of my favorite lines from Alfred represents this sentiment — “I cannot believe my life has come to a place where I have to say this — Please step out of the dinosaur’s… buttocks.”  Yup, Damian and Jon were hiding from Alfred inside that giant Dinosaur’s butt. Tomasi must be having way too much fun.

Super Sons #5: Peace in the Batcave

The one thing that strikes me as odd is that the actual battle between Damian and Jon is so short — no more than four pages. Which isn’t a problem in and of itself, but it makes the comic’s title a bit of false advertising. This is more a problem with DC’s marketing than an issue with the comic itself. Ultimately, as a series, SUPER SONS begs the reader to let go of nitpicks and just come along for the ride.

Because it’s Peter Tomasi, ever the master of poignancy, he even manages to work in some nice emotional resolutions for the characters. When Batman and Superman show up, they help explain to their sons how they overcame their differences and became friends. Damian and Jon are ever reflections of their fathers. They’re more emotional and extreme in their behavior but still operate under their dads’ principles. The comic leaves Damian and Jon in a place where a lot of these differences resolve themselves. Tomasi nicely sets them up to be a more unified crime-fighting force. After five issues of bickering, it’s great that Tomasi is going in a different direction with the Robin/Superboy relationship.

The artwork has been a real highlight for this series, and SUPER SONS #5 is no exception. Allison Borges uses vast backdrops to paint a vivid and seemingly interactive picture of the Batcave. When Damian and Jon start battling with the Batcave as their personal playground, the objects within all become easily disposable props — the Batcomputer, the colossal penny, and, of course, the giant Dinosaur — all transform into weapons to be used at the whim of the two embroiled hot-head heroes. Borges beautifully renders all of this, and she seems to delight in large-scale destruction. She’s capable of great intimacy too, such as the lovely panels near the end where she juxtaposes Batman and Superman uniting against separate images of their sons. Together, the images demonstrate how Batman and Superman, once enemies, became an inseparable force, suggesting that Robin and Superboy can too.

READ: Find out how the battle between Robin, Superboy, and Kid Amazo concluded in our review of SUPER SONS #4!

Overall, SUPER SONS #5 is another fun, entertaining, and energetic entry in the series. It caps off the first arc with a naturally escalating conflict between Jon and Damian. The physical component of the fight resolves a bit quickly, but it’s all in favor of Tomasi’s neat storytelling. He nicely wraps up the five-issue conflict and sets the stage for different kinds of fights ahead. By the end, it’s become clear that we’ve just finished reading the origin story of DC’s youngest dynamic duo. Now the real fun begins!