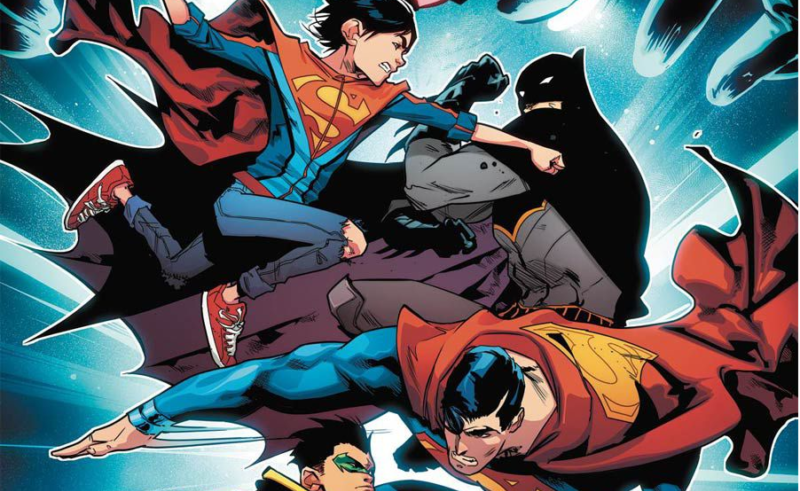 Three issues in and SUPER SONS is still as amazing as expected after Jon and Damian’s first meeting back in SUPERMAN #10. We’ve seen our two young protagonists work together since then, but we still get to watch this team-up in its very early stages in this series. SUPER SONS #3 shows while they still bicker and banter, they can also put their differences aside for a fight. In this first arc, we get to watch Robin and Superboy adjust more and more to being Super Sons! We see them use their bickering as a distraction against their enemies. Yet, we also see that same bickering get in the way of making any actual progress. It’s clear that Jon and Damian still have a long way to go. 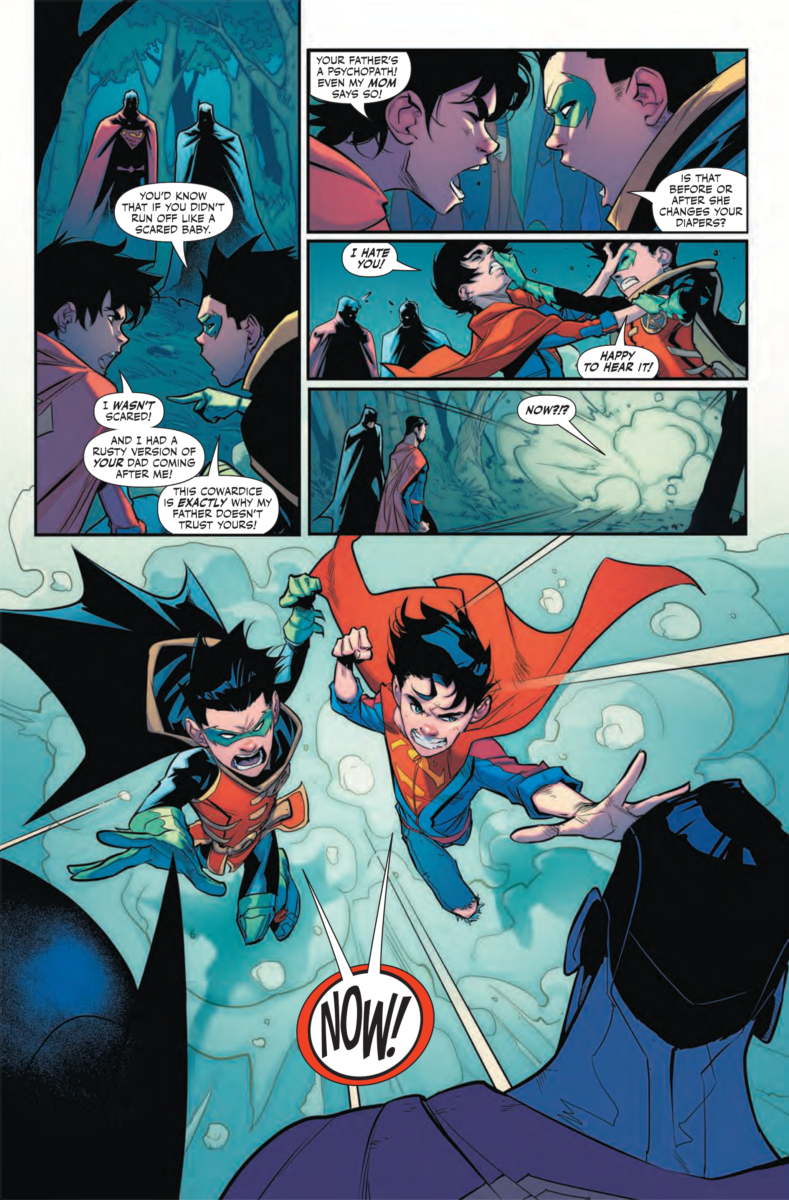 As The Story Goes

SUPER SONS #3 opens with some backstory for Kid Amazo and his family. So far, we know that Kid Amazo has been torturing his own family and keeping them captive. On the first page, however, we see Reggie – Kid Amazo – helping his family in a fight against Titano. All seems well with the “Super Duffys,” but it only makes me more curious to know what changed since then. On the next page, we find Jon and Damian right where they were in the last issue. We’re led to believe Superman and Batman caught on to their antics and were putting a stop to it, but that wasn’t the case. We quickly see Superman attacking Robin, and Batman attacking Superboy, which means these aren’t their real fathers. It’s exciting, and it quickly establishes how powerful this Kid Amazo is.

Watching Robin and Superboy interact is one of the most entertaining things DC has brought to their Rebirth line. They both have such differing personalities, and it’s what truly makes their characters shine. In the previous issues, we watched the two struggle with who exactly was “in charge.” In SUPER SONS #3, we finally get a glimpse of the two becoming more comfortable with each other. It’s these small moments where they work so well together that show the real potential of these young heroes. All this while getting more exposition of what Kid Amazo’s actually up to. Knowing he’s now in possession of the Amazo armor, amplifying his powers, makes him an exciting villain and leaves the possibilities endless of what’s to come.

READ: Want to know more about Jon’s and Damian’s first team up? Take a look at our review of SUPERMAN #11!

Kid Amazo’s sister, Sara, is also formally introduced. In the last issue, we watched her escape her brother’s grasp after he killed their family in front of her. In SUPER SONS #3, we learn she has the power to control machines and uses this to save the Super Sons. This act of heroism from Sara is endearing. We just saw her witness her family’s death and that shows she’ll be playing a key role in this arc. We also get to watch Sara play the part of the anchor. When Jon and Damian start bickering, Sara regularly breaks up the argument, so they can focus on the actual fight.

It’s always entertaining to watch heroes fight. We’re used to watching them struggle in combat with each other or dramatically cutting ties. We’re not, however, used to constant bickering and playground insults. Particularly from the children of Batman and Superman. SUPER SONS #3 is a great reminder that these two are still only kids. They don’t respond well to insults. They’re arrogant, quippy, and funny as hell. While Sara explains to them how the Amazo virus gave her her powers, Robin just so happens to feels entitled to make Superboy look stupid for not knowing what the Amazo virus is. This incites an argument like it always does. These arguments usually happen because of Jon being the innocent kid he is and wanting to seek help. Whereas Damian sees this as a sign of weakness and proceeds to provoke him for being a “child.” 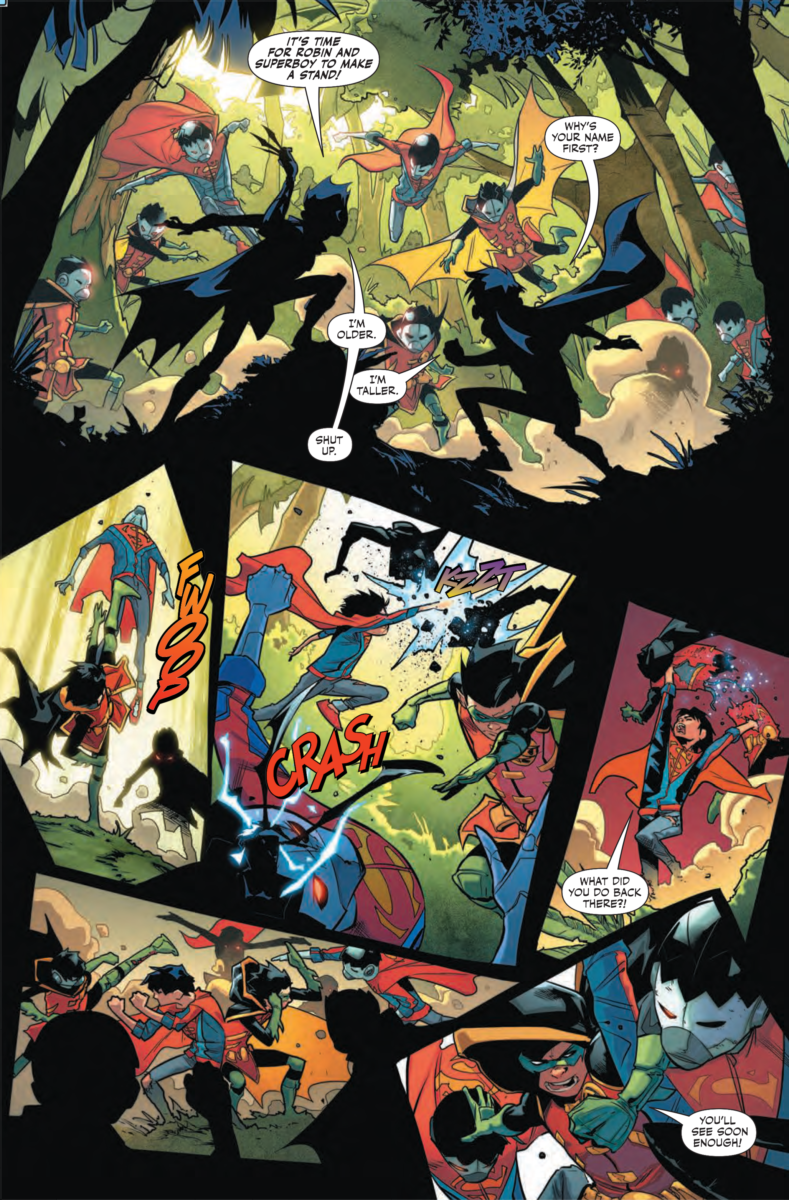 Once again, Sara must break up the fight, but this time it’s not Sara! Kid Amazo reveals that Sara is simply another android he created to kill, which isn’t the first time he’s done this. After commanding Sara to come back home, he unleashes an armada of Robin and Superboy androids. Sara, however, is able to take control for a small moment to buy them some time. In a moment like this, all bickering – well, not all bickering – is thrown aside as it’s time for the Super Sons to take a stand!

Look At Those Smiles!

With sharp and exciting art by Jorge Jimenez, we get to see the different fighting styles between Robin and Superboy. Also, I thought it was an excellent touch to have Superboy fighting Robin androids and vice versa. It all adds to their petty, childish, bickering. Other than the fight scenes, Jimenez’s facial expressions feel true and realistic. These are children, and Jimenez shows that in all the side-looking, goofy faced, tongue-sticking smiles all children do. The sharp line work never leaves me confused or looking at the panel for too long. Instead, I admire the art and point to the attention to detail. The bright color palette also adds to the fun. It makes all the art that more exciting!

READ: Want to know what else Superboy and the Kent family are up to? Take a look at our review of SUPERMAN #20!

SUPER SONS #3 is another great example that shows the amazing ambition of this series. This is a title where we’ll watch Jonathan Kent and Damian Wayne learn more and more about what it means to be Superman or Batman one day. All while they’re learning how to work together efficiently. Tomasi brings his great characterization work from SUPERMAN and implements it with finesse for these two characters. The dialogue never feels forced, and the chemistry between Robin and Superboy is so mesmerizing that it’s never tiring to see them argue. All of this is portrayed through Jimenez’s great capacity to show real emotions that never look out of place. It all fits so well together, and the SUPER SONS will be alongside the greats one day.