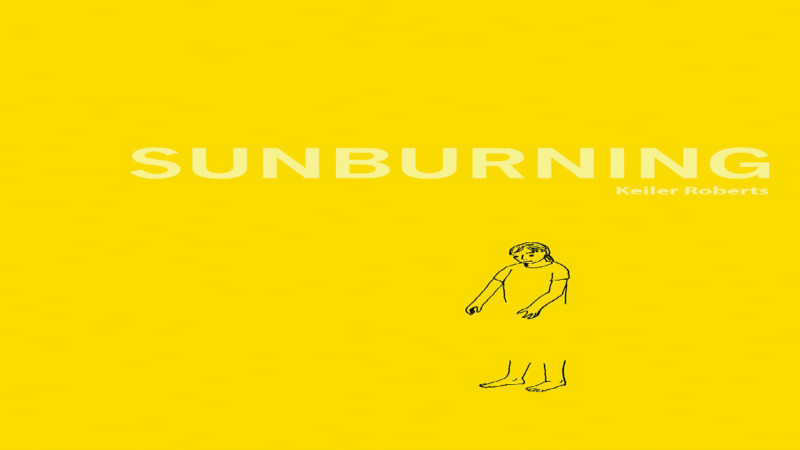 I always thought it was weird when shows like SEINFELD called themselves “shows about nothing.” They do this because they’re shows about people’s mundane life experiences. They address situations that most people wouldn’t think twice about. There’s nothing grand or extreme, nothing that feels too scripted. Yet life is never about nothing. Life does not follow a neatly presented story arc in a 30-minute time frame. Cumulatively, life is comprised of a series of little events. Going shopping at the store, brushing your teeth — mundane actions that slowly add up to make you, you.

Similarly, Keiler Roberts’ SUNBURNING, which seems like a comic about nothing, simply isn’t. Graphic novels have often been the unsung hero of autobiographical publications. Originating in the underground, they allow an author to not only tell the audience about their life experiences but show what these events have done to them and how they shaped who they are. Stories like Alison Bechdel’s FUN HOME and Raina Telgemeier’s SMILE both employ narratives that draw from their author’s life. The “messiness” of their actual lives preserves the integrity of verisimilitude. They show how key moments can both entirely influence one’s life and impact the readers that happen upon their tales. The narrative threads appeal to readers of fiction, but the clearly defined story arcs often clash with the snapshot-esque reality of being human. Sometimes, characters just have to exist in life, moving forward to an unknown end.

LISTEN: What the heck is FUN HOME? Listen to Episode 65 of our podcast on it here!

These narrative stories are satisfying to read, yet they are by no means complete. Alison Bechdel does not cease to exist once she finishes telling the reader about her relationship with her father, her coming out to him, and his subsequent suicide. Rather, she goes on living. Similarly, it’s fitting that Roberts’ SUNBURNING also does not really have a classic ending. The narrative meanders as long as Roberts wishes it to until it finally peters out at the last page. 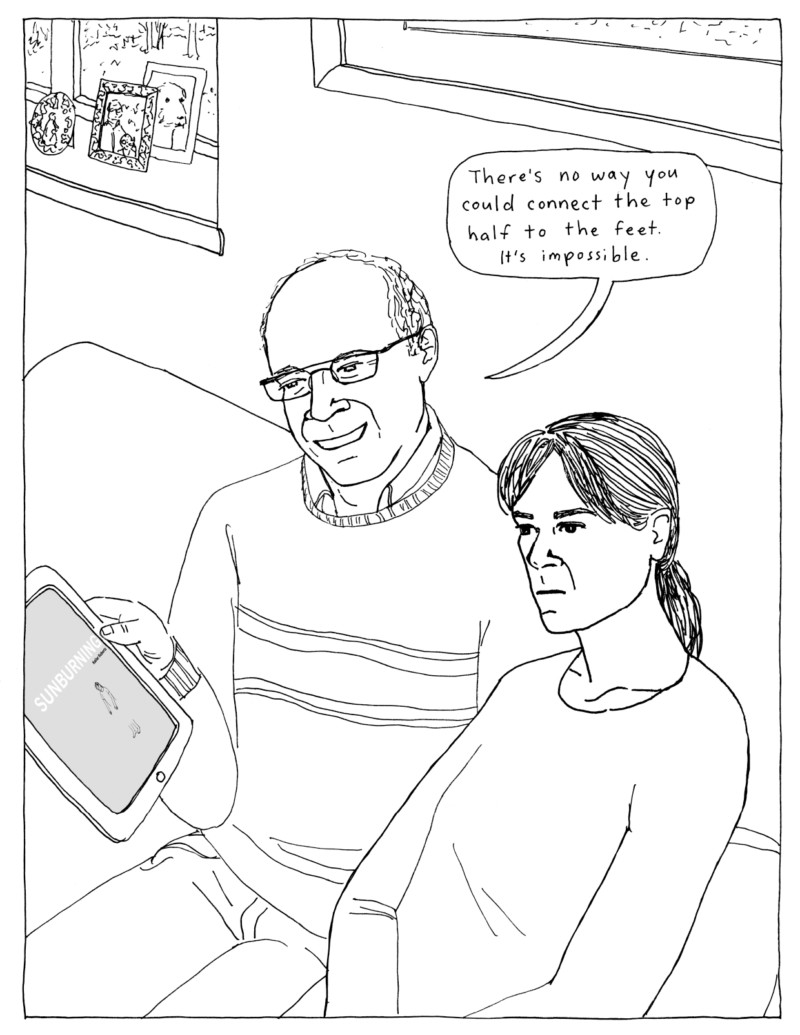 Roberts continues this tradition of confessional comics in SUNBURNING. Like the webcomics before it, this work has no definite plot. It delves into various moments of her life. The comic starts with her showing her husband this comic and his joking that, even if she wanted to, she couldn’t have drawn proportional legs on the cover. Then, it delves into her everyday life: going to the hospital to get new medication for her bipolar disorder, trying to teach art to students who couldn’t care less about the class, playing make-believe with her daughter, and even going to a Korean-style spa with her friends. These moments meld together with one another.

Roberts’ art-style made me feel as though I was reading something private, like she had ripped out a page of her private journal and handed it to me. This gave it a raw, unpolished aura. It was as though the events she was describing in each panel were occurring as she drew and she was hastily trying to get the impression of the event. She was pulling back the curtain and inviting the reader to get a glimpse into how she sees the world. It is revealed early on that she suffers from bipolar disorder. As a result, she suggests that she might be an unreliable narrator as she is never certain that what she perceives is reality or an illusion. Like for Roberts, the reader’s difficulty in deciphering an image reflects her constant struggle with figuring out what is real and what is in her head.

The standardization of the panel layout mirrors Roberts’ own psychosis, how her life is going through repetitive beats that emphasize her melancholy loneliness. She projects that as one gets older there is an increase of this repetitive pattern in the activities she performs. The days no longer feel as unique as they once did. Roberts is all too painfully aware of this, for while some moments take up large sections of a page showing how important they are to her, many of them are small, insignificant echoes that go on for a time and then subsequently stop without any explanation. 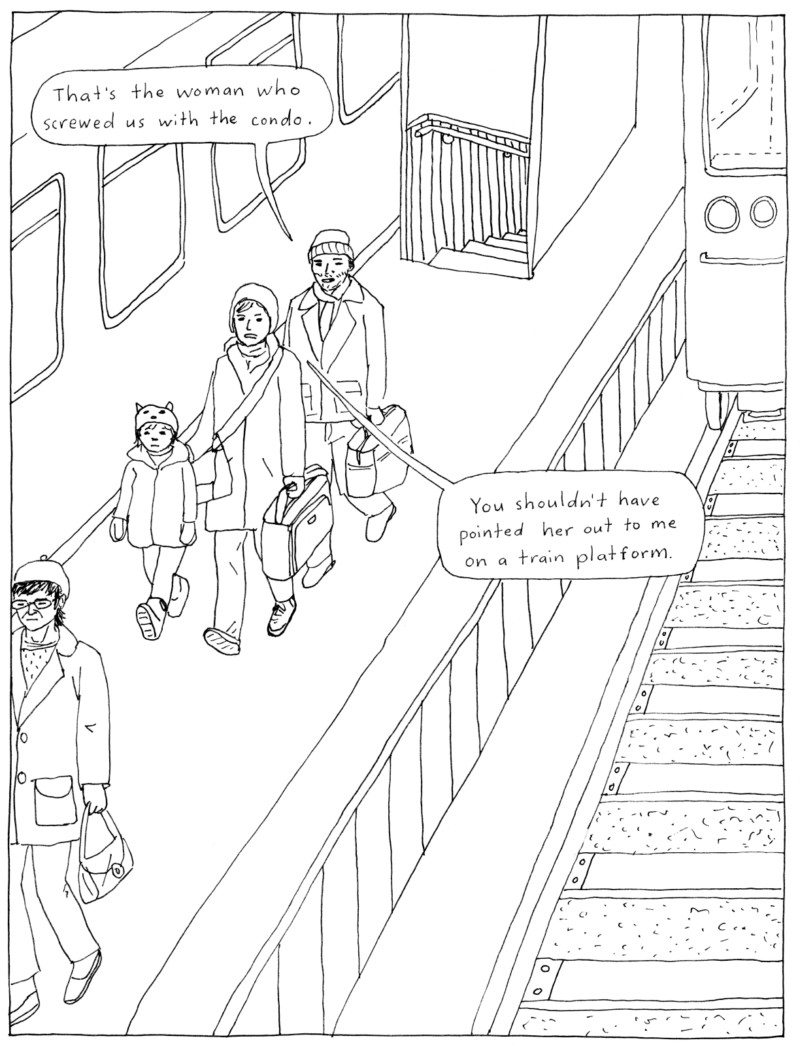 The universality of the art style more than makes up for the difficulty in always identifying with the narrator. Everyone may not understand what it’s like to struggle with a devastating life event like a miscarriage. However, more than one reader will look at her trying to make a dress, her anxiety swirling around her, and project themselves into that situation.

READ: For more on mental health with regards to the artist, check out THE ELECTRIC SUBLIME!

That doesn’t mean there aren’t bright moments. Throughout SUNBURNING, Roberts’ daughter, Xia is prominently featured. Roberts’ interactions with her are some of the brightest moments of the comic. Their relationship is the emotional center of this narrative. She might be explaining to her daughter why she has to take medication and observes that her daughter struggles with this. This adds depth to the story. Showing a scenario that many readers may not be familiar with makes the text richer for its inclusion. The young, innocent personality of the daughter having to try and learn something that many children never have to face in their lives is poignant and rings true.

Roberts’ love for her daughter is evident in how frequently she appears in the text. Even though the child is young, she’s already fully encompassed her everyday existence. Xia is part of her life, warts and all. If her daughter were not in it, then it would not be the life of Keiler Roberts.

Roberts’ moments do not have anything deep to say about life. There is a string of small events that suggest a triumph on her part by just surviving. What’s important is that this isn’t a made up story. It doesn’t need deeper meaning for the events; it just has to be true to reality. She just has to live, as do we all.