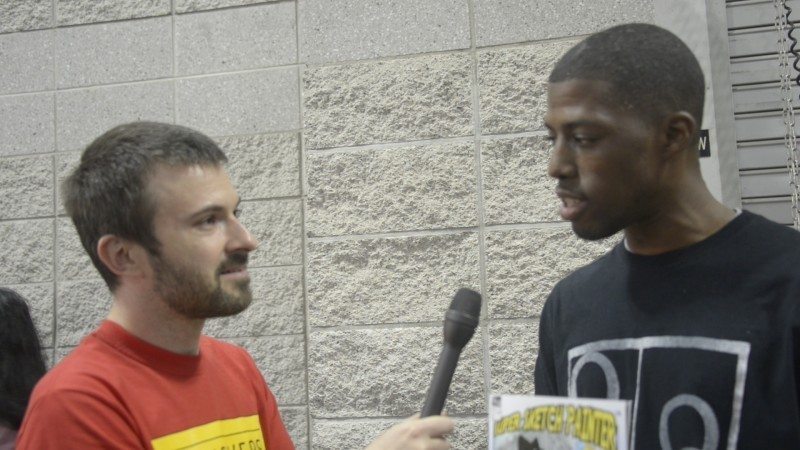 New York Comic Con 2015 is all about creators promoting their work — if you’re lucky to get a booth that is! What if you don’t have one? First, you go anyway! Next, you share whatever it is you have created. After all, if you have created a comic book, New York Comic Con has the best audience for it. Such is the case with creator Suliman Onque, who approached ComicsVerse to talk about his passion: SUPER SKETCH PAINTER! Who? You ask. Only the coolest hero you haven’t read about yet! Imagine reading about your favorite comic book hero dying, and how devastated you feel. Super Sketch Painter is a hero who jumps between comic books and sets things right for worlds that need heroes. I received an issue from Suliman, and after talking to him, I was able to read the book itself.

READ: Remember the holidays? Check out our list of Top 5 Comics to get through them!

The issue itself is a lot of fun, and he captures perfectly the fans’ enthusiasm for comics, but also how they can affect you when the story goes south. In addition, there is a lot of humor and action within the comic. Suliman balances the writing and art well. My only regret is I did not get to read an issue two!

In the interview, we subsequently talked to Suliman about his work, how long SUPER SKETCH PAINTER has been in development and what he plans to do next.

Finally, it’s clear that he’s passionate about his work, and if you want to see more of Onque’s work, you can see some here. Suliman Onque also discussed his brother’s work, including a character called RATCHET MAN, which suggests that we could be in for a whole new universe of superheroes.

LISTEN: Ever wanted to listen to a whole podcast about Allison Bechdel’s FUN HOME? Check out Ep. 65 of the ComicsVerse Podcast!