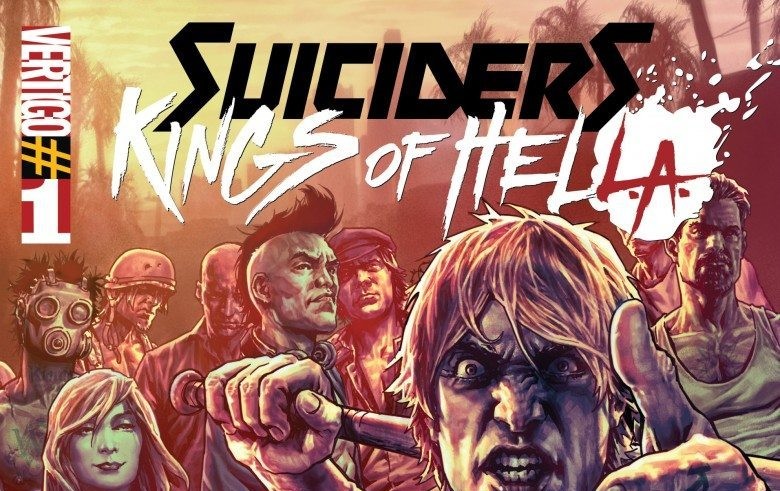 How do I best describe SUICIDERS: KINGS OF HELL.A.? It’s a little like CHILDREN OF THE CORN meets a stock dystopian novel. No, it’s not as bad as that sounds. SUICIDERS is a beast that hits the ground running.

The premise is that, 15 years before the SUICIDERS story takes place, there is a massive earthquake (aptly referred to as “The Big One”) in L.A. that seems to wipe out all civilized society there. In the midst of this whole quake, babies were born (also aptly referred to as “Quake Babies,” not to be confused with “Quaker Babies”). Our main character, Trix, loses both of her parents and grows up as part of an L.A. gang with her brother. They’re into skateboarding and throwing bricks at authority figures, because they’re against society like every punk child of the ’90s, but it doesn’t come off as “misunderstood-angsty-kids” as it sounds. The characters, though hardly fleshed out yet, already show a bit of promise.

READ: Interested in Vertigo Comics? Give LUCIFER a Read!

It should be noted that this book is not for everyone. From the first panel, SUICIDERS is a far cry from the clean streets of Metropolis. This is a story of dirt-covered gang wars and post-apocalyptic survival. If you can’t handle some ruffians throwing bricks and threatening brutal death to their enemies, read another book. It’s impossible to discern protagonists from antagonists, but it’s a thrill nonetheless.

Beneath much of the grit and profanity of SUICIDERS, it is clear that these characters are going somewhere, but maybe not to the best places. There’s a reason the subtitle is “Kings of HELL.A.” These are bad people. They grew up in a city where they had to murder and pillage to survive. As such, this will probably not be some rags-to-riches, Little-Orphan-Annie kind of story. It probably won’t be totally bleak, though. One of the plots of the first issue is Trix becoming pregnant (we assume with D-Troy’s child), which will likely throw a whole other emotional wrench into the story in later issues. 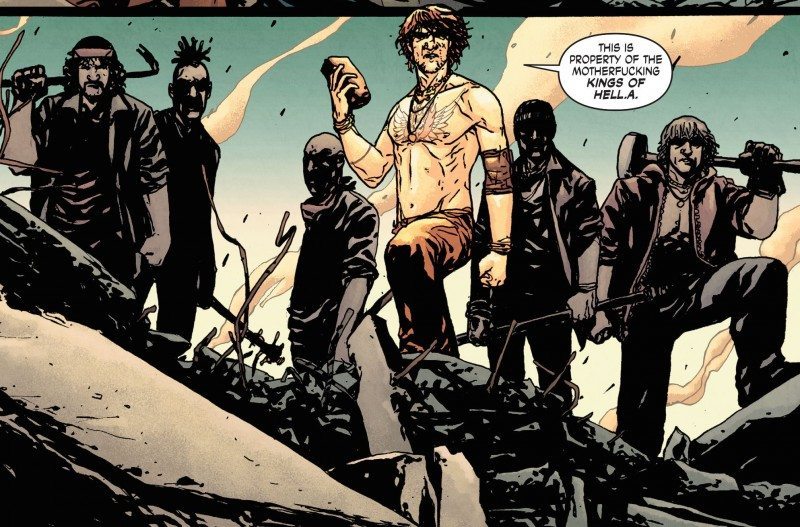 Where SUICIDERS really shines is in the art. Lee Bermejo’s art in the prologue does a fantastic job setting up the premise of this story. Its stylized presence is present just enough that it makes the prologue stand out clearly and importantly. Then, Bermajo turns the reins over to Alessandro Vitti for the rest of the book. What he brings to the book is a sort of dilapidated, crumbling, MAD MAX style to the book that does an exceptional job at conveying what the writing and script cannot.

As a first issue, it’s pretty solid. The real test for SUICIDERS will be to see where it goes from here. There’s a lot going for it, but if it can avoid a lot of the pitfalls and cliches that run rampant in dystopian content, there may be a great book in the making. At the very least, I’m sticking around to find out.