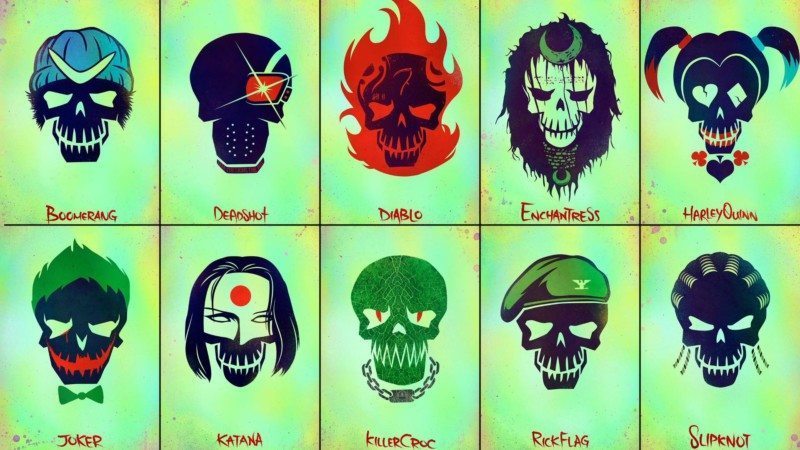 Don’t let the critics dissuade you from seeing this movie and forming your own opinion. Go see SUICIDE SQUAD and decide for yourself whether you like it or not. I saw this movie multiple times, and I can honestly say…this movie is a mess. But, a mess can still be fun and entertaining.

There are many keys to good movie making, but the two most important are characters and plot. I tend to care more about the character development than their function in the story. SUICIDE SQUAD does a great job in fulfilling this need of mine. That being said, the plot is a little sloppy. PLEASE don’t blame the screenwriters though, because the studio and a billion other hands touch all original scripts before they hit the big screen. Allow me to break this down for ya, point by point. I’ll start with the cast and characters. 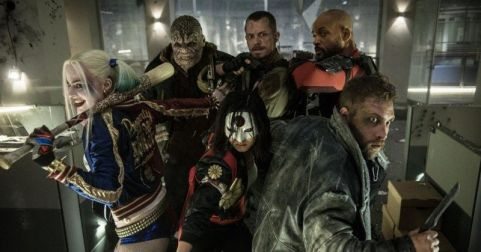 Deadshot (Will Smith): Smith shines as one of my personal favorite comic assassins. He brings just enough emotion, humor and badassness to the character without having to take attention away from the other Squad members (as Smith often does). Deadshot is a calm, cool, and cocky SOB who knows just how good he is. If there is one thing Will Smith can without a doubt play, it’s a character with all these traits. His action scenes are extremely well done, which is hard to accomplish with a character who uses mostly gunplay and less hand-to-hand combat. Similar to the Bohemian Rhapsody trailer, the music in the film helps guide the fight scenes of all the characters and creates beautiful action.

Harley Quinn (Margot Robbie): Robbie faithfully depicts the unhinged Harley Quinn, and at many times, steals the show. Quinn plays the role of the loose cannon in the group, which adds excitement throughout the film. Robbie nails the persona and the accent, leaving me wanting to see more in the future. One of my biggest concerns going into the movie was how they would tackle the Harley and Joker backstory. I am pleased to say that they did a great job giving us a clean introduction to this odd couple. They didn’t give a ton of detail, but there was so much to do and so many other characters to introduce, that you couldn’t fit the whole story. In the end, we understand the basics of their relationship.

Amanda Waller (Viola Davis): Creepy at times, but always confident and in control, Davis does a solid job with this character. At the end of the day, you know she is the smartest person in the room and that’s exactly who Amanda Waller needs to be. That being said, there was nothing special about the performance. In fact, I think I enjoyed The CW’s Amanda Waller more because it’s the exact same, but it came first. Still, there is nothing bad or wrong to be said about what Davis did with the role.

The Joker (Jared Leto): I love Ledger’s Joker, Nicholson’s Joker and Hamill’s Joker. I like Leto’s Joker too; however, there is just not enough screen time to say how much I like it. I will say that I am excited to see more of him. Unlike the animated series, this Joker seems to genuinely care for Harley (not just as his play thing). I hope to get more of their backstory in the future. P.S. I am a big fan of this Joker theory, so click here to see it!

Boomerang (Jai Courtney): I haven’t ever been a big Jai Courtney fan, but he does a pretty good job adding a new villain to this DC universe for The Flash to fight. While Boomerang is never a “real” threat to Flash, he is an iconic antagonist and I think Courtney does a great job in portraying the ridiculousness of the Captain. This character acts as solid comic relief with his stupidity and that is an important type of villain that the DCEU lacks; a brainless bad guy. Also, Courtney holds his own in scenes with Will Smith, which is impressive.

Enchantress (Cara Delevingne): I love Enchantress for the first half hour of the film. She may even be my favorite character until the heel turn when she becomes the main villain. The dialogue immediately expunged whatever positive feelings I had for this character and I ended on a sour note with her. I don’t think it was Cara’s fault, I liked her a lot in fact. She just got stuck with a poorly developed story, some awkward lines and some poor CGI for her and her Tiki-Warrior-outfit-wearing brother. Visually, Enchantress is cool to see and I hope we get more outside-the-box stuff like this in future films.

Rick Flag (Joel Kinnaman): Kinnaman plays a straight edge, by the book captain all the way through. The character is pretty bland by nature and thus he doesn’t add much to the film other than acting as a toy for the Squad to play around with. I think this was needed in this movie, but it’s hard to say it’s a stand out performance. Defiantly not a bad one though.

Diablo (Jay Hernandez): I knew less about Diablo going in, but found myself caring more for him when I left the theater. Hernandez is a solid choice for the role, but I think the screenwriters should be credited for this new interest in the character. Diablo’s role adds the powerful addition of a member with a temper that often offsets his conscious. Would love to see more of him in the potential sequel.

Killer Croc (Adewale Akinnuoye-Agbaje): Croc looked great and didn’t help or hurt my view on the film much.

Katana (Karen Fukuhara): Katana is really cool to watch in fight scenes. Samurai-esque moves are always entertaining and her interesting backstory is mentioned, in passing. Not much development, but plenty of kicking asses. I did want to see more of her though because I felt she was underused and could have added something interesting as the “good guy” on the “bad guy” team.

Like I said, the characters all worked really well together and this is definitely where the film’s strength lies.

Discussing the plot of this movie is difficult, because it is all over the place. I think we can break it down into 5 sections for further discussion.

Section 1 (The Character Introductions): This section takes up the first large chunk of the movie (roughly 30-40 mins), and it is fantastic. I loved the humor and the personality each member of the Squad is given right out of the gate. Even the flashbacks, which have yet to be successful in DCEU films, were not distracting and added to the film (*cough* B v. S pointless/stupid flashbacks *cough*). I was hooked into the film from the start and I had a big Joker-like grin on my face the whole first section.

Section 2 (Trouble Brewing): Section 2 acts as a plot development piece introducing the villain of the movie, Enchantress. This slow build shows the lack of control over this witch and her final transformation into the films big bad. At this point, I was on board and still smiling like Leto. There was nothing too sloppy that took me away from the plot or characters. Not knowing the main villain going in also helped to add some shock value (I thought it would be Joker). The first moment of “oh no” happened for me when Enchantress’ brother showed up. For one, it was poor CGI and a ridiculous costume. Adding the brother into the mix brought nothing to the movie and it marked the first moment my smile turned to a ‘hmmm’ face. That face continued through the hole-in-the-sky evil plot reveal that we have seen 1,000,000,000 times (seriously, find a new villain finale Marvel, Fox, and DC).

Section 3 (Calling The Team To Action): But than I was right back to happy times when the team started assembling. The montage of getting their combat gear back was great and the quippy humor fit well. Despite what some may think, Marvel doesn’t own the concept of a funny superhero movie and this film is proof of DC’s humor writing capabilities. This section took my mind off the Enchantress absurdity for a bit. We got into the city and had some fun rescuing Amanda Waller! It was great guys, trust me.

My Thoughts During The City Fight Scene:

“Pay no attention to the witch and her Tiki Warrior brother next to the evil sky-hole.”

“I hope my pleasure can last.”

“Waller is a badass.”

“Oh yeah, there’s that bar scene the studio added in at the last minute during reshoots…” 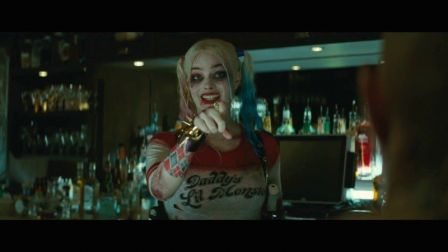 Section 4 (Bar Scene and Final Battle): The bar scene acts as a dumb transition into the final mission. It felt extremely out of place and forced. The dialogue in this scene and in the Enchantress fight are so “cringy” that it takes you out of the scene. I remember saying, out loud, “Why would they have her say that?”, multiple times during the back and forths between Enchantress and Harley. Even when the good/bad guys won, I was still underwhelmed because of this. The good news is, in reality, the Enchantress fight scene is not that important, even if it was the main mission of the team. The important thing is that the team is formed and they work well together. Their next movie mission can be better now that we have established these characters. We don’t have to get hung up on one bad mission because that issue lies in a single story and it doesn’t carry over to the next film like the issues from B v. S do. B v. S has issues stemming from character development, which are more difficult to correct moving forward. Thus, we can forget about the last movie’s plot and look forward to seeing these cool characters in their next team-up.

Section 5 (Aftermath): Deadshot has a nice scene with his daughter and Harley is broken out of jail by The Joker. This may seem small, but what this does is it sets up a potentially great batch of future films. More Harley and more of the Squad, plus some cool new villains for our Justice Leaguers to take on. The Flash v. Boomerang, Batman v. Deadshot or Batman v. Joker/Harley. It’s a great time to be a comic fan.

The point I am trying to make is that while this movie isn’t perfectly structured, and while its plot is at times dumb and rushed, it introduced a lot of compelling new characters and it kept me smiling for the majority of the film. This movie is a fun time and you can enjoy it even with its flaws and some missed opportunities.