When the job is too insane, when the mission is too deadly, when any act would be suicide, you call the SUICIDE SQUAD.  The name SUICIDE SQUAD is one that has deep historical roots in DC Comics. Originally the name of a group of World War II heroes, the title was given to a mercenary group headed by Amanda “The Wall” Waller. The concept is DC’s take on THE DIRTY DOZEN. A group of C-List supervillains are given the chance to take time off their sentences by going on missions too dangerous for anyone else to undertake.

The series has been something of a cult favorite since its inception. The original writers, John Ostrander and Kim Yale, took disposable villains (like Captain Boomerang and Deadshot) and made them into compelling characters. They also created characters like Amanda Waller and Oracle who would go on to have healthy creative existences for decades to come in the DC Universe. The Squad has gained a ton of prominence in the last few years, with television appearances in shows like JUSTICE LEAGUE UNLIMITED and ARROW Lucky for us, the ragtag Suicide Squad will be unleashed on the world in this summer’s new film in the DCEU franchise. So here’s your mission: track down these essential SUICIDE SQUAD reads brought to you by Brian Long and myself. Load your weapons, strap on your boomerangs and mallets, and be careful with that explosive collar you’ve got strapped on. With these crooks, you’re either in or you’re out. 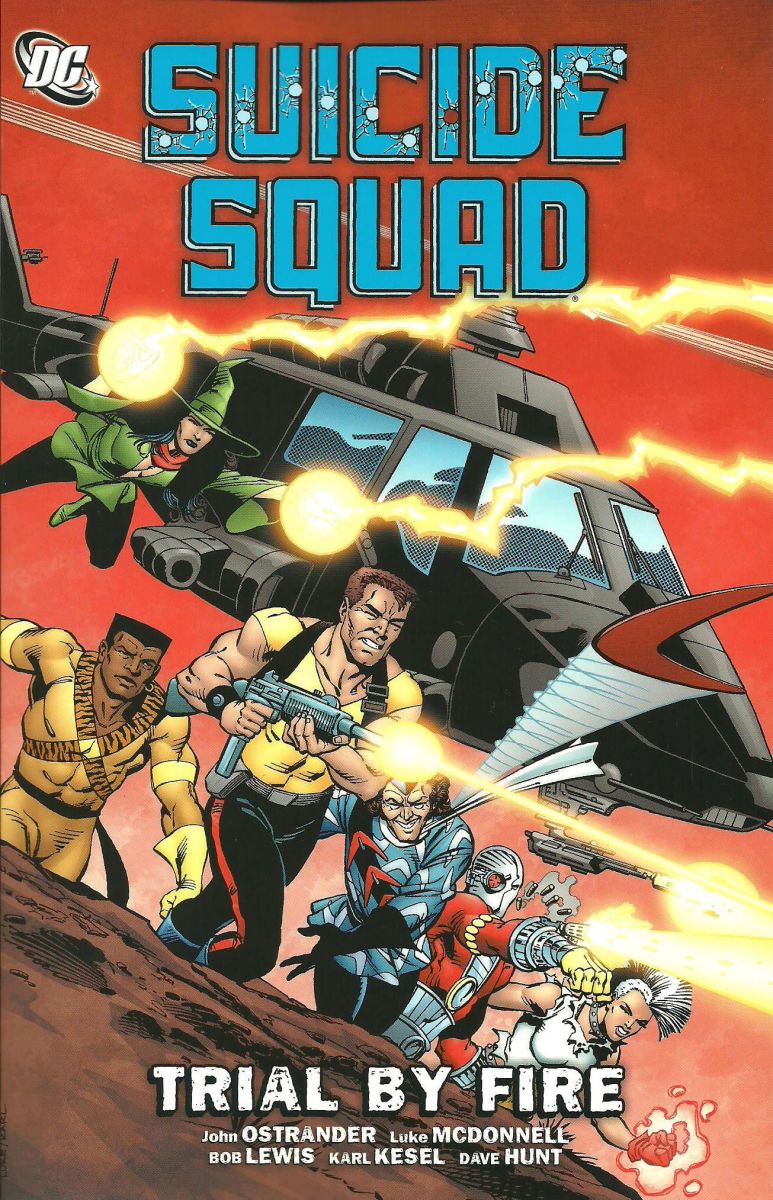 When it comes to the original run of SUICIDE SQUAD, it’s hard not to simply say the entire series is essential because it’s just that good.  If you have to pick any place to start, as Maria von Trapp once said, “the very beginning is a very good place to start.” After their first appearance in the LEGENDS mini-series, the Squad gets their official origin story in SECRET ORIGIN #14. This issue gives a great crash course on the original Suicide Squad from WW2, as well a lot of great characterization of Amanda Waller. Her take-down of Ronald Reagan’s domestic policies to his face gives the character a perfect introduction.

READ: We like SUICIDE SQUAD comics, yes we do, so why not check out our review!

The rest of the volume develops the plot and seedy characters so well. This is also a collection that fits a ton of story into one package. Ostrander knows how to tell an action-packed story with no more than an issue or two. You’ll see the Squad’s first mission against the Jihad (the recurring villains of the series), a face-off with Granny Goodness’ Female Furies, an infiltration into a white supremacist hate group, a rescue mission to Moscow, and it all gets capped off with a quiet “Personal Files” tale. This volume is a perfect sampling of what the Squad is all about. 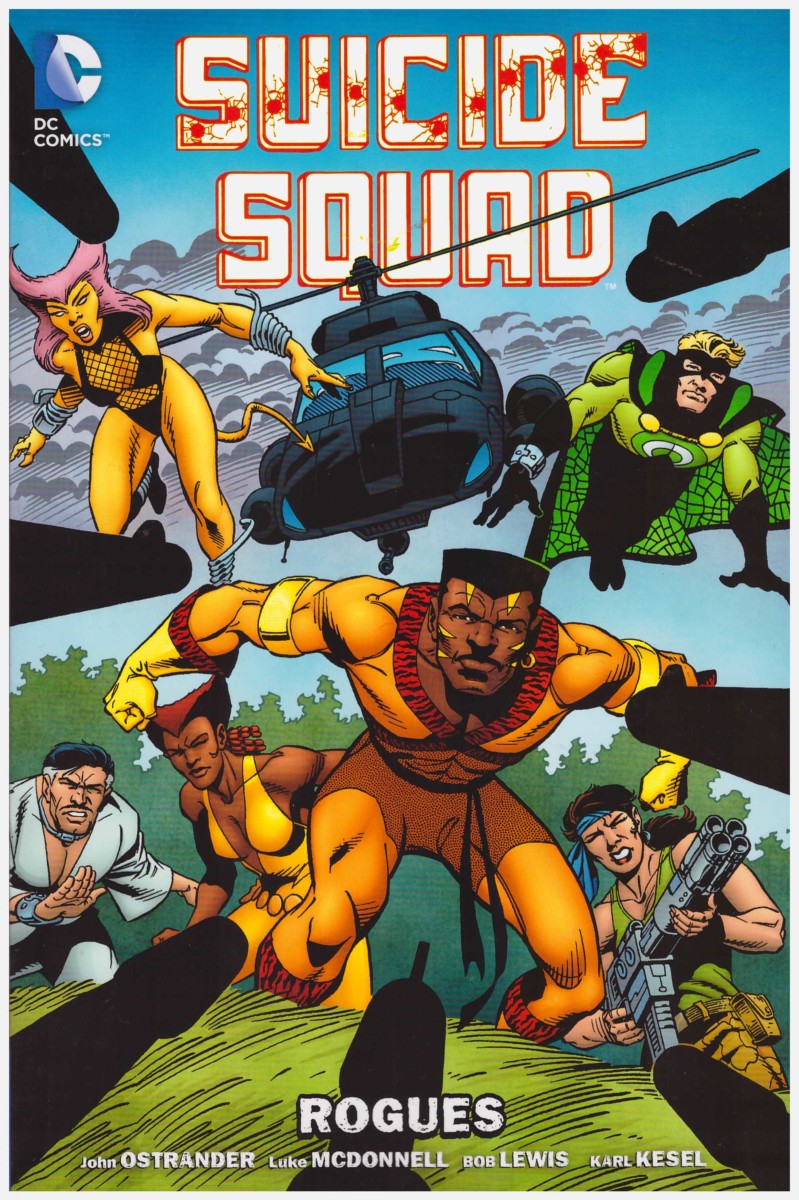 One of the pleasures of a book like SUICIDE SQUAD is the way it operates in its own little corner of the DC universe. In this story, the secrecy of the Squad is at risk when a corrupt politician decides he wants access to the Squad for his own sinister purposes. What her enemies fail to realize is that you never back Amanda Waller into a corner. Political intrigue collides with supervillain chaos leading to a thrilling conclusion that changes the Squad forever. This volume is also notable for SUICIDE SQUAD #23, which features the introduction of an anonymous computer hacker known only as Oracle! 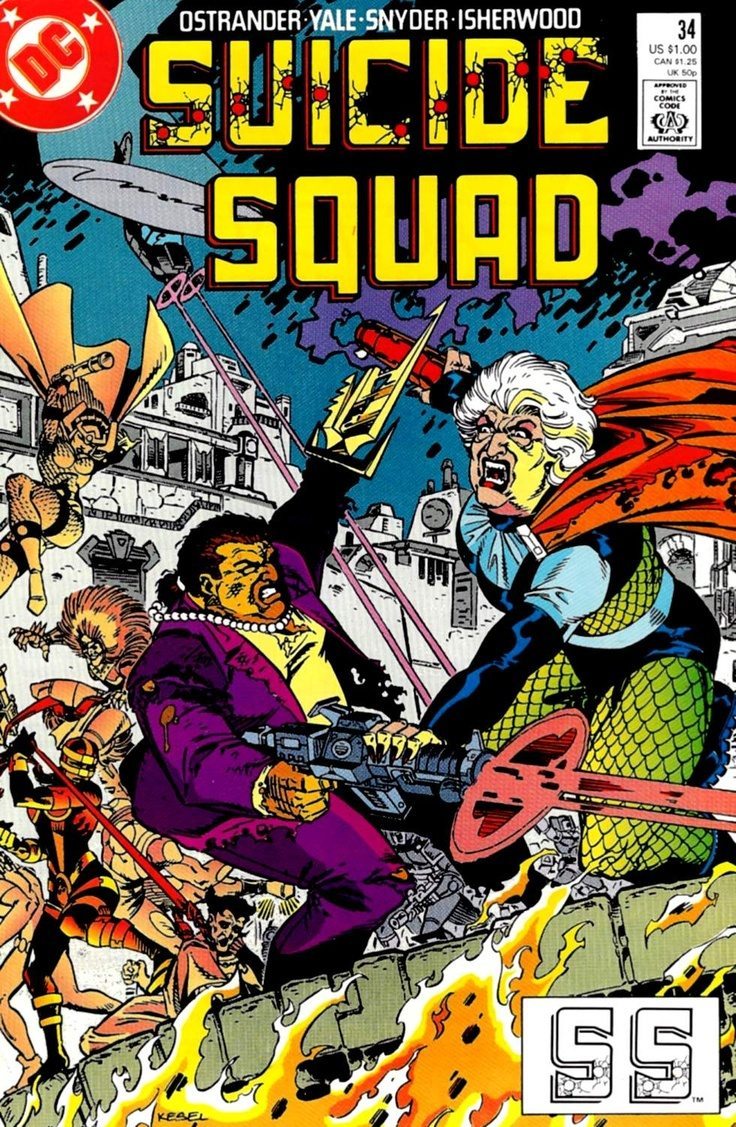 The amnesiac Suicide Squad member, Duchess, suddenly regains her memory. Normally this is a cause for celebration, but when she recalls that she is actually Lashina of Granny Goodness’ Female Furies, the excitement quickly turns to danger. With her return to Apokolips including some Earthbound stowaways, the remaining members of the Squad must mount a rescue from the Armaghetto of Darkseid’s home planet.

Fans of the Suicide Squad and Jack Kirby’s FOURTH WORLD will delight in this culture clash. The Female Furies and the Suicide Squad go head-to-head and you’ll finally find out the eternal question of who would win in a fight: Darkseid’s army of Parademons or Dr. Light! What? You haven’t wondered about that?. This story arc is also responsible for this Granny Goodness versus Amanda Waller cover and if you don’t think that is the sickest thing ever then get out of my face.

SUICIDE SQUAD: IN CONTROL/OUT OF CONTROL 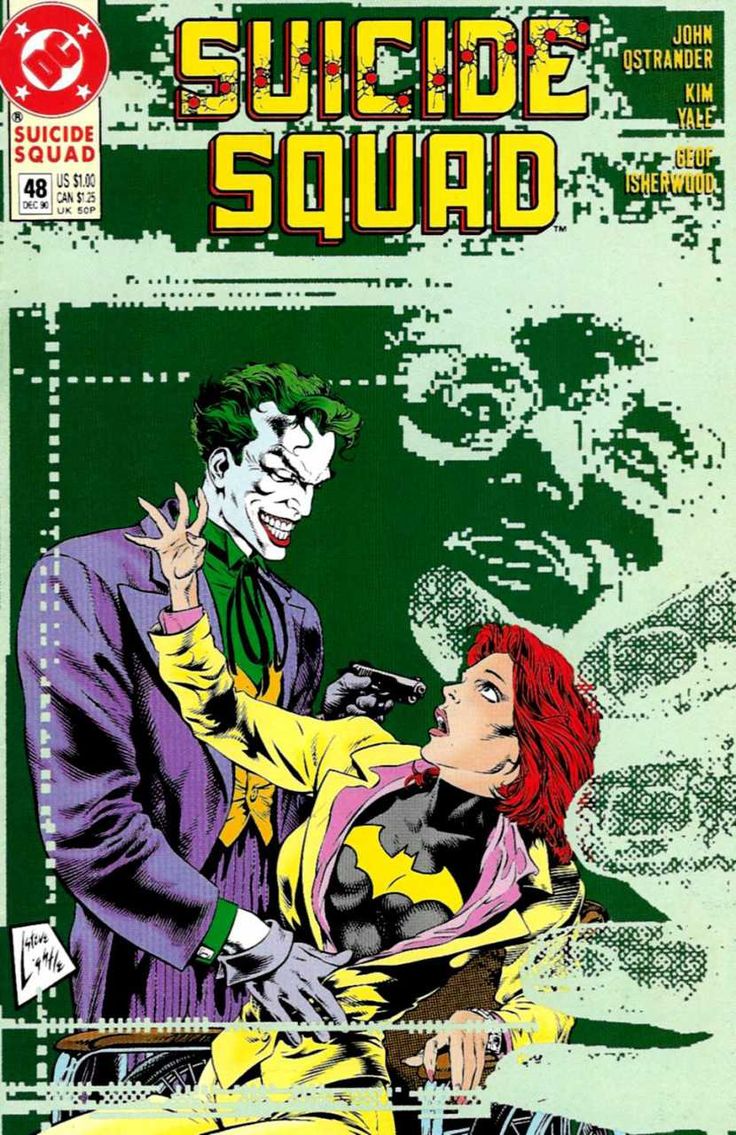 READ: Speaking of Barbara Gordon, why not check out our review of BATGIRL AND THE BIRDS OF PREY REBIRTH!

This negligence of such a beloved character is criminal, but John Ostrander and Kim Yale pick up the pieces that Moore left behind and rebuild Barbara Gordon into a new, equally iconic role. Under the guise of Oracle, Barbara Gordon is able to continue her crusade against crime using her brilliant mind to provide intel to those who need it. Before she was the voice in Batman’s ear, Gordon secretly lent her expertise to Amanda Waller and the Suicide Squad. Any fans of Barbara Gordon, especially in her role as Oracle, should check out this two-part issue that provides the character with much needed catharsis following the events of THE KILLING JOKE.

SUICIDE SQUAD: FROM THE ASHES 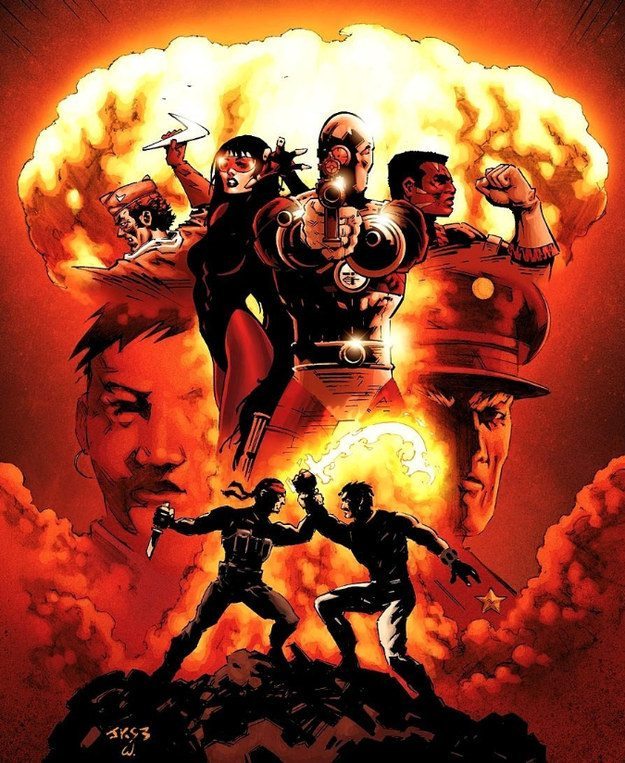 FROM THE ASHES mini-series picks up after the events of the original SUICIDE SQUAD comic, featuring the return of writer John Ostrander. This series is a perfect bridge between the original series and the New 52 book. It also explores the fate of one particular Squad member who was thought to be dead.

Part of the fun of FROM THE ASHES is seeing the transition from the original team to the modern one with their new status quo changes. Ostrander does a great job transitioning the team to the modern era of comic book storytelling. Each issue acts as its own fulfilling arc within a much larger narrative. With Javier Pina providing great, action-fueled art, FROM THE ASHES is a more than worthy continuation of the SUICIDE SQUAD series.

SUICIDE SQUAD: KICKED IN THE TEETH 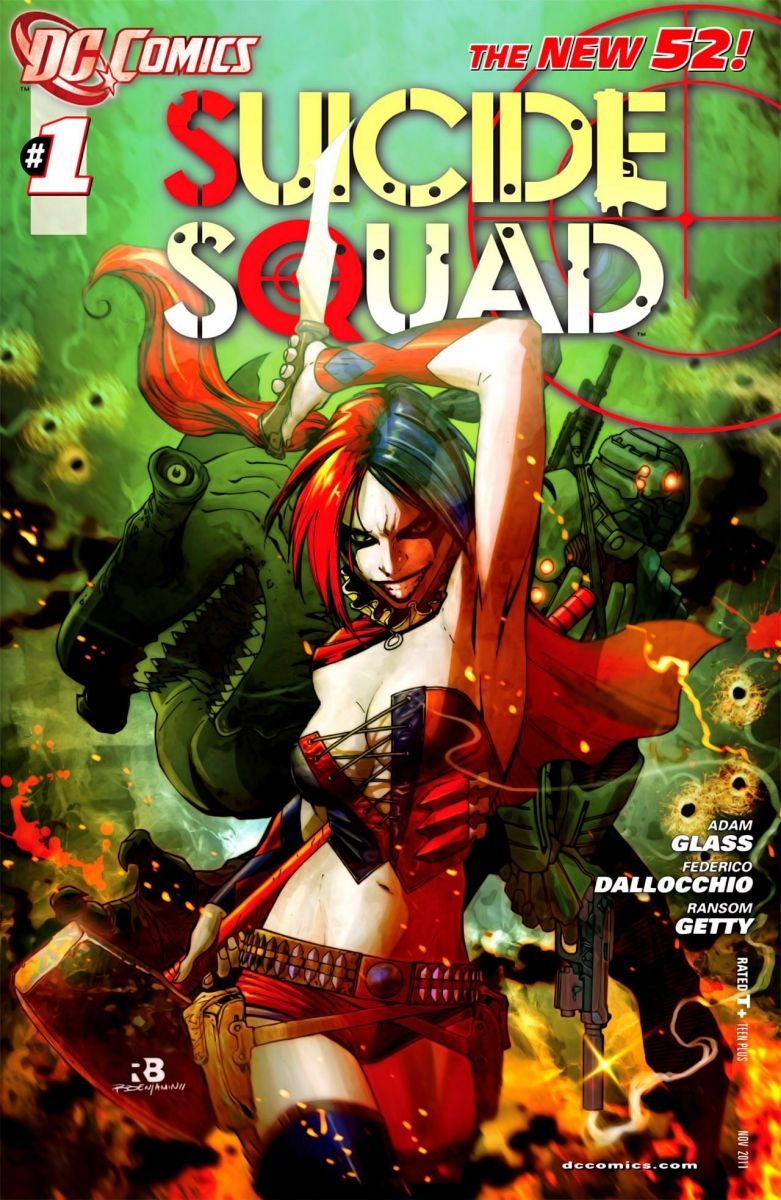 KICKED IN THE TEETH is the first arc for the SUICIDE SQUAD in the New 52 and it set the standard for how stories with the team were told over the last five years. From the moment our favorite criminals appear on panel, the action begins with no signs of stopping. Torture, skydiving, and human bombs threatening to wipe out a stadium full of people. Adam Glass and a team of various artists including Federico Dallocchio and Clayton Henry got to introduce audiences to new, modernized versions of popular characters like Harley Quinn, Deadshot, Captain Boomerang, and Amanda Waller.

READ: Time to rev up those Harley fans because we’ve got a review for the first issue of HARLEY QUINN AND HER GANG OF HARLEYS!

Like many books of the New 52, the updated costumes for certain characters was met with controversy. SUICIDE SQUAD was the first book to include Harley Quinn without her original, Bruce Timm-designed outfit from BATMAN: THE ANIMATED SERIES. Another controversial character change in the series was the physical appearance of Amanda Waller. Waller has been one of the most beloved, full-figured characters in comics since her debut, but in the New 52 her proportions were changed to make her more thin and attractive. Her many fans were not pleased. While it may seem like I’m listing off negative things about the book, they’re all aspects that I found to be beneficial to the title. SUICIDE SQUAD: KICKED IN THE TEETH was a fun introduction to a team I was not familiar with prior to the New 52. More importantly, it set up a weird relationship between Deadshot and Harley Quinn to distance her from the Joker. There was an odd scene where she made him wear the Joker’s face and it’s as haunting as it is awesome. 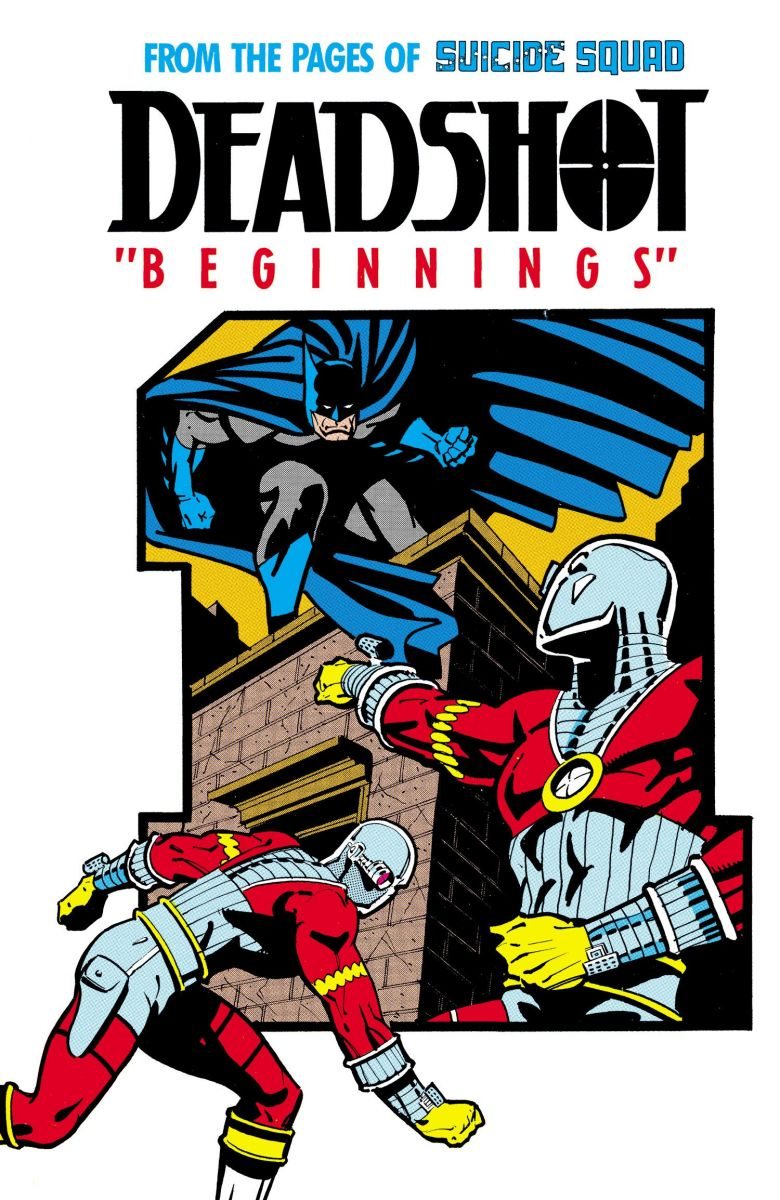 Collect alongside two of his appearances in BATMAN and DETECTIVE COMICS, this four-issue mini-series gives new insight into what makes the amoral killer Floyd Lawton, aka Deadshot, tick. John Ostrander and Kim Yale clearly have their favorites when writing SUICIDE SQUAD, and Deadshot is undoubtedly one of them. Ostrander and Yale turned a Z-list villain into a character so badass only Will Smith could play him. This Deadshot mini-series is the best 80’s action movie that was never made. Deadshot starts out on a mission of vengeance that ends with just about the worst family reunion you could imagine. Equal parts action and nihilistic rumination on life and death, DEADSHOT is a must-read for any comic book fan.

HARLEY QUINN: HOT IN THIS CITY 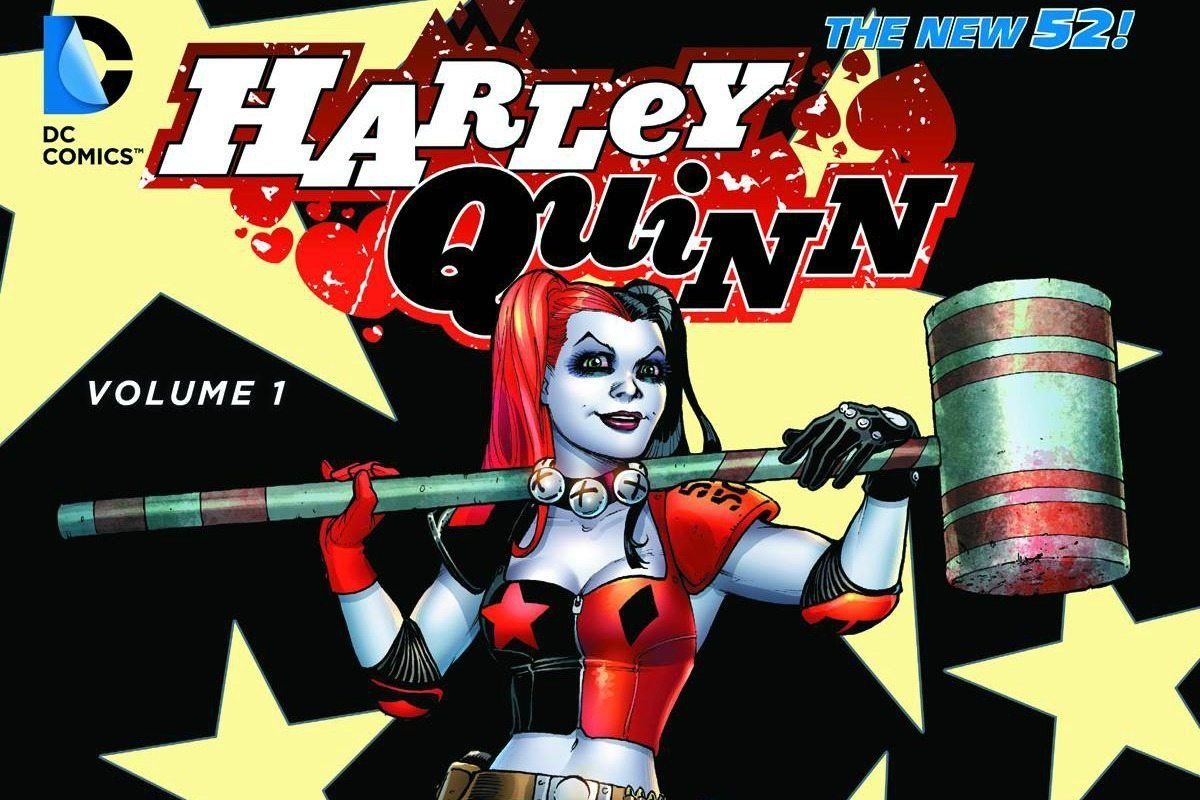 If you haven’t heard of Jimmy Palmiotti, Amanda Conner, and Chad Hardin’s HARLEY QUINN, you must be living under a rock. The creative team has developed her so well that the series is on the New York Times’ Bestseller list, and as a character she’s an even bigger fan favorite than ever before. One of the most common complaints throughout the New 52 was the lack of heart and humor in any title. After Harley moved back to Brooklyn, HARLEY QUINN shined in the eyes of fans and became the heart of DC’s entire publishing line.

LISTEN: Tired of hearing us talk about SUICIDE SQUAD? Listen to our podcast on the holy trinity of DC Comics!

As stated before, Harley Quinn has always been a popular character but many fans were skeptical after her classic court jester comic outfit was ditched for a more “sexy” look. Palmiotti and Conner shook things up when they launched her own ongoing series with a new group of friends, new digs, and a talking beaver. The book has an out-of-continuity feel but it has developed Harley in a way we haven’t seen since MAD LOVE. It doesn’t hurt that Hardin is so talented at drawing Harley and her crazy world. If you’re a fan of Harley Quinn, the first volume is a must-read. The character has become DC’s answer to Marvel’s Deadpool. I, personally, think she’s a lot more interesting and with this creative team, I’m sold for whatever comes next. 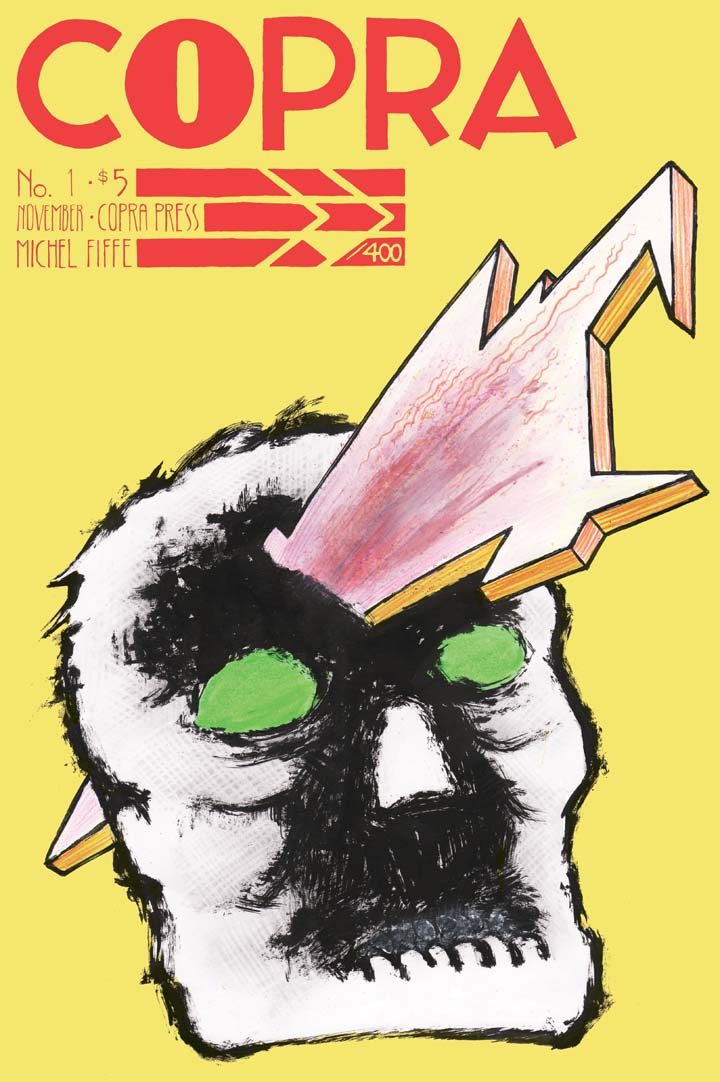 Though technically not an official SUICIDE SQUAD comic, COPRA is a book from writer and artist Michelle Fiffe featuring his own collection of Suicide Squad analogue characters. The series focuses around the black ops group COPRA. When one of their former members betrays them, the group goes on the run and encounters some serious inter-dimensional weirdness along the way. Fiffe has fun with the analogues and opens up the world accordingly. Ever wonder what it would be like for the Suicide Squad to meet Dr. Strange? COPRA has the answer for you. If you prefer your Squad with some of the flavoring of the 80’s series, as well as some surreal strangeness, then this comic is for you.

If this listicle doesn’t make you want to go out to your local comic and/or book store before SUICIDE SQUAD is out, I don’t know what will. The team might be ever-changing due to the exploding head thing, but the stories always manage to be epic and fun. Old or new, SUICIDE SQUAD is here to stay, so get out and start reading!