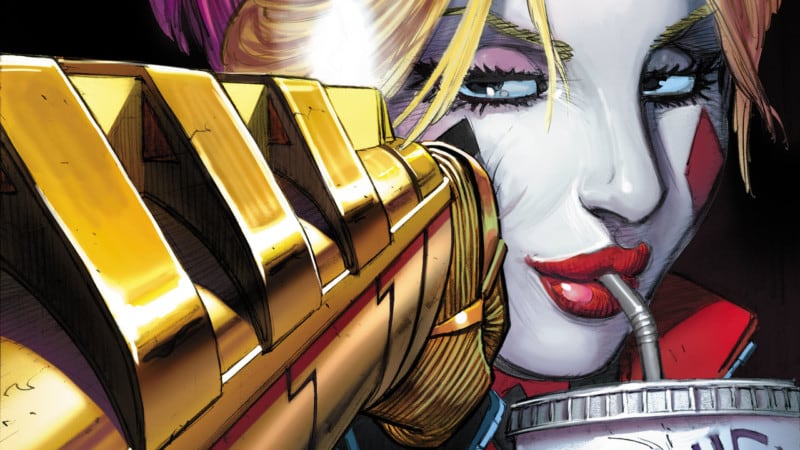 Suicide Squad #13 was an intense read from start to finish. Bringing this issue to life, we had writer Rob Williams, with artists Danny Miki and John Romita, Jr. So I knew going into this issue that the quality of content would never come into question. The first thing you notice when looking at any comic book is the cover. Here we see Harley Quinn calm as can be, sipping a drink, as Deadshot has his wrist-gun aimed and firmly pressed against her face. The overwhelming theme of Suicide Squad #13 was betrayal, and I thought that was perfectly encapsulated in the cover art. The artwork in this issue wasn’t overly complex or vibrant, and it didn’t need to be. It was all very dark, and much softer in terms of contrast than some previous issues. But for Suicide Squad #13, I thought that added to the look and feel of the issue in a very positive way. 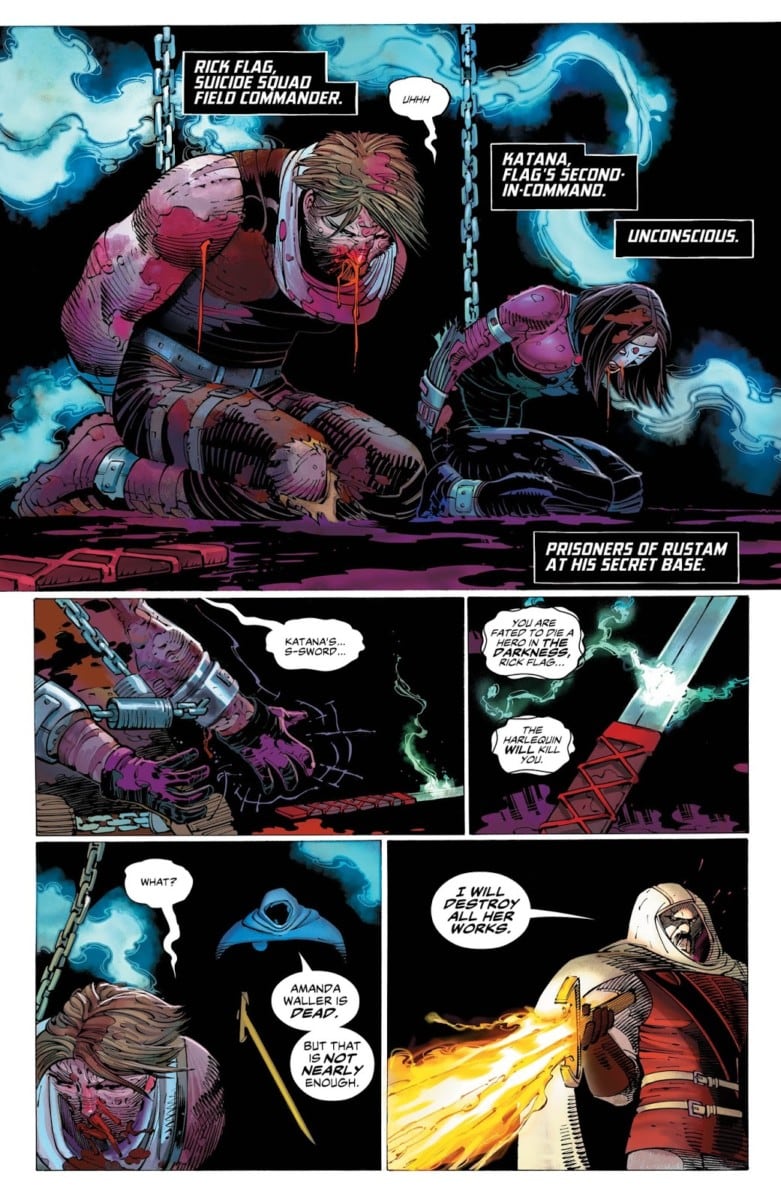 The opening scene of this issue could only be described as ‘insanely intense,’ as we see Rick Flag and Katana being tortured by Rustam in the opening panels. This certainly isn’t a bad way to bring the reader into the story from the get-go. This issue had to build upon the ongoing Amanda Waller storyline which has already seen her getting shot! So, it should come as no surprise here to say that yes, she’s definitely dead. There was no surprise resurrection, no is-she-or-isn’t-she nonsense. The clear intent of the writer and artists in the issue was to carry over the ongoing storyline immediately and slowly transition into the next phase of the story. They executed that to perfection here in my opinion. Rarely in comic books do we get such an aggressively charged opening sequence. It was certainly a refreshing change of pace, and it did a lot in terms of storyline progression.

READ: Take a look at our review of SUICIDE SQUAD #1!

Throughout the issue, we see Harley Quinn and Deadshot going back and forth over whether or not Amanda Waller needed to die. Deadshot’s viewpoint was pretty blunt and to the point. Deadshot’s main point boils down ‘the woman put brain bombs in our heads and forced us to go on suicide missions.’ In the end, however, it was revealed that Deadshot had contacted Rustam and cut a deal to ‘set him free’ in exchange for killing Amanda Waller. Harley Quinn revealed just how hurt she was by Deadshot’s act of betrayal when she told him: “maybe I’m crazy shot, but I thought we had each other’s backs?” Clearly, the writer wanted Harley to come off as more of a leader, and less of a wild card. We even got glimpses later on of Harley Quinn’s softer side when she tell’s Hack she’s not meant to be a villain so much as she’s meant to be a hero. I really liked those added elements, and I think they give Harley Quinn a bit more depth going forward. 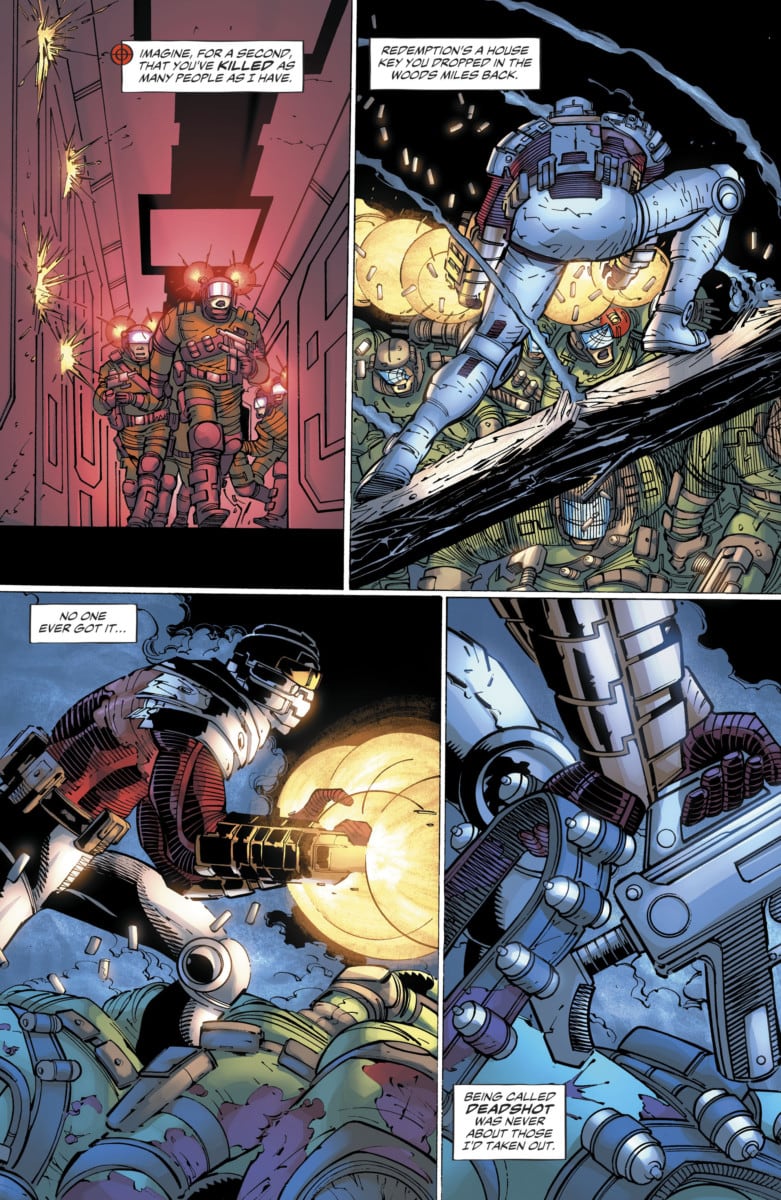 By the end of the issue, Djinn has deactivated the Squad’s brain bombs (the only thing Amanda Waller had to completely control the Suicide Squad at all times), and the squad is given their freedom. Rustam and Deadshot want the rest Suicide Squad to join them on their crusade to free the rest of the world. What we see instead, is steadfast opposition from Hack, Harley, and the rest of the squad. Of course, with the brain bombs gone, and nothing keeping anyone from freedom, they all go their separate ways. It would be a strangely poetic way to end such an action packed issue if we didn’t get such a crazy ending. An epic reveal leaves us with more questions than answers going forward. That isn’t a bad thing, as I feel it sets us up for what’s sure to be some great storytelling going forward.

Overall, I thought this issue was very well done. I liked the flow of the story from start to finish, and I thought there was great depth added to each of the characters as well. With any great story, you want the reader to feel something for the characters: good or bad, right or wrong. I felt for the Suicide Squad here, I felt for Harley Quinn when she tried to plead with Deadshot not to be so selfish, and I felt for Deadshot when he told Harley Quinn he wanted to die until he found something worth living for. This issue had heart, and you even felt bad for the bad guys at times. You felt bad for the good guys at times. But you felt something for the characters, and you cared about the story. I really enjoyed this issue, and would definitely consider this one a must read.