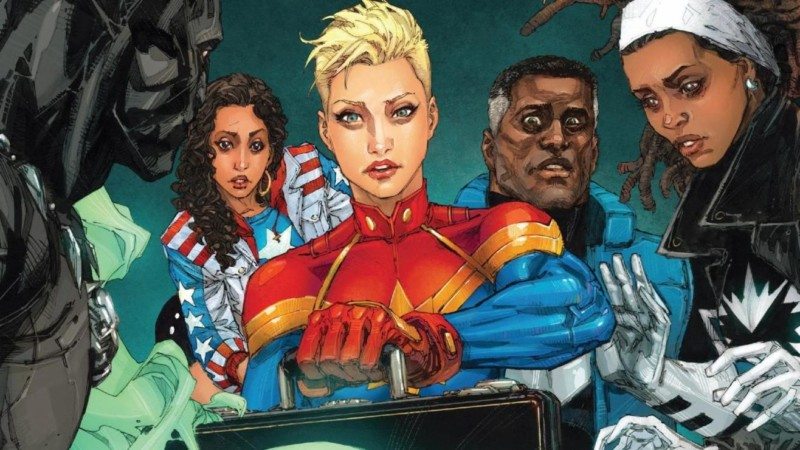 One of the greatest concepts about comics is their ability to explore possibilities. In superhero comics, where the unlikely is put forth as normal and nearly anything is plausible, we see the exploration of possibilities as limitless. This is especially true when a book channels outer space, particularly Marvel’s cosmic universe. THE ULTIMATES take to the cosmos with style to question and solve the most intriguing phenomena of Marvel’s cosmic arena.

The Marvel Universe is roughly 55 years old. With this comes over half a century of content: thousands upon thousands of back issues with hundreds and hundreds of notable characters. This can be daunting for new readers, but it’s a treasure trove for creators like writer Al Ewing and artist Kenneth Rocafort. After SECRET WARS, these two developed THE ULTIMATES, a book that, in my humble opinion, is one of the most important and entertaining comic books produced by Marvel this past year. With that said, here are three ways that development is making THE ULTIMATES one of Marvel’s most enjoyable reads.

READ: Need more background? Catch up with our review of THE ULTIMATES #1! 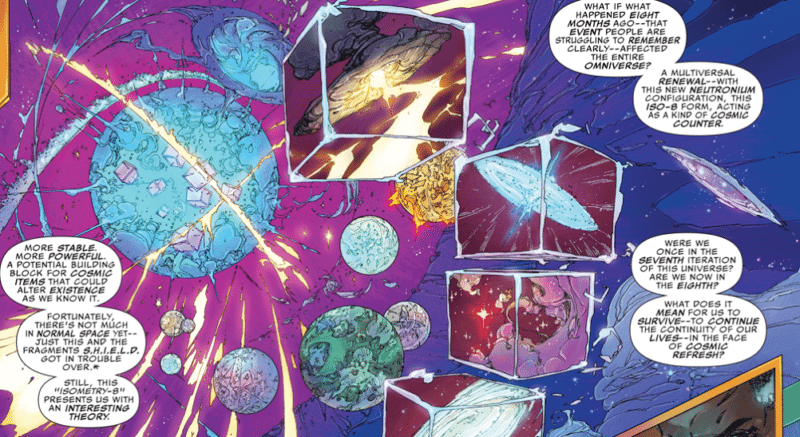 When I look at the cover of THE ULTIMATES #1, the first thing I notice are the five main characters standing on Galactus’ hand: four of them — Black Panther, Blue Marvel, America Chavez, and Spectrum — are POC. And the one character that is white — Captain Marvel — is a woman. There are no white males on the team, and three of the five characters are women. This is possibly one of the freshest things to receive in this day and age. But Ewing doesn’t make a spectacle of this: it’s natural. The characters flow well together in terms of profession (three are scientists) and personal history. There have been too many cases in the past where a token character is placed in a situation for the sake of faux diversity. That isn’t the case in THE ULTIMATES, and Ewing’s unique usage of each character showcases that beautifully.

“The impossible is where they start.” This is the slogan for THE ULTIMATES, advertised at the beginning of every issue. The main setting of THE ULTIMATES is space, where a mission like reprogramming Galactus is just another item on the daily agenda. They don’t simply defeat enemies; they solve problems. In a post “Secret Wars” Marvel Universe, the opportunities for space exploration (and beyond in Exo-Space, an area in-between realities discovered by Blue Marvel) are endless. And it is this type of opportunity that is important in the Marvel Universe, because it encourages thought-provoking and groundbreaking storytelling. Ewing is in a position to influence mainstream Marvel titles while also letting his characters go off on their own adventures that needn’t directly concern New York City for once. For example, it is in THE ULTIMATES that Thanos and Molecule Man first appear post SECRET WARS, an event that changed the Marvel Universe drastically.

READ: Are you up to date with the status of the Marvel Universe? Read our SECRET WARS #9 review!

When a book like THE ULTIMATES is being written, artwork is crucial. With such obscure concepts being presented, it takes a special type of art and artist to present these ideas in an understandable manner. Kenneth Rocafort does this nearly flawlessly. His depictions of space and time are some of the most beautifully displayed images I’ve seen in comics. He adjusts perspective in a way that makes you believe anything in this universe is possible: because really, that might just be so. He’s working with Marvel entities such as Chaos and Control, Galactus, and Eternity, where it takes a truly gifted artist to interpret what they should look like on paper. He has the freedom to have fun and go a bit over the top. What I’ve witnessed thus far in this series has my mind fluttering with potential and scenarios with what’s really out there in the universe, both our own and Marvel’s. 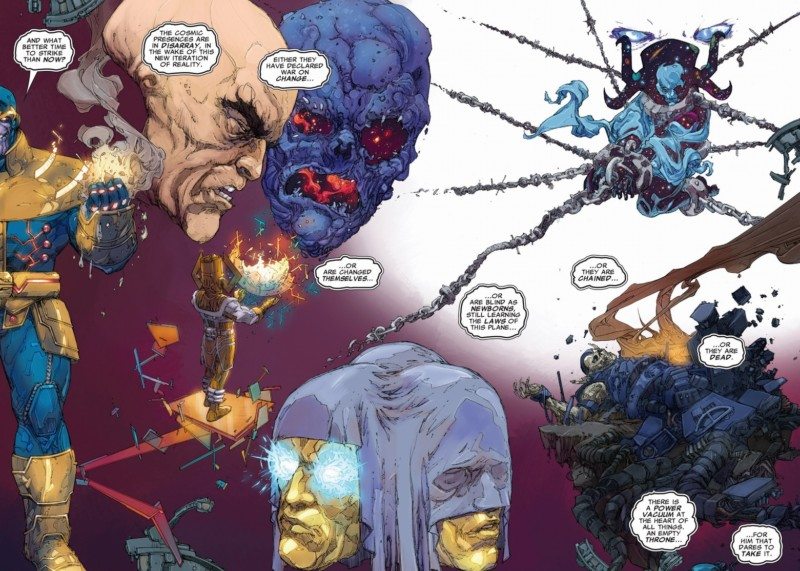 If you’re a fan of settings such as Exo-Space and entities like Galactus being reverse engineered to become a giver of life rather than a taker, THE ULTIMATES is for you. If you’re interested in infinite possibilities with characters who are deep and complex, THE ULTIMATES is for you. Even if you’re new to Marvel’s cosmic side of things , you’ll be given a proper taste and excuse to reach for those back issues at your local comic shop. Do yourself a favor and catch up on this series if you currently are not doing so. THE ULTIMATES II comes out as a relaunch after CIVIL WAR II, so you’ll have a solid jumping on point. This is the type of book that will take B-List characters and make them A-List material.