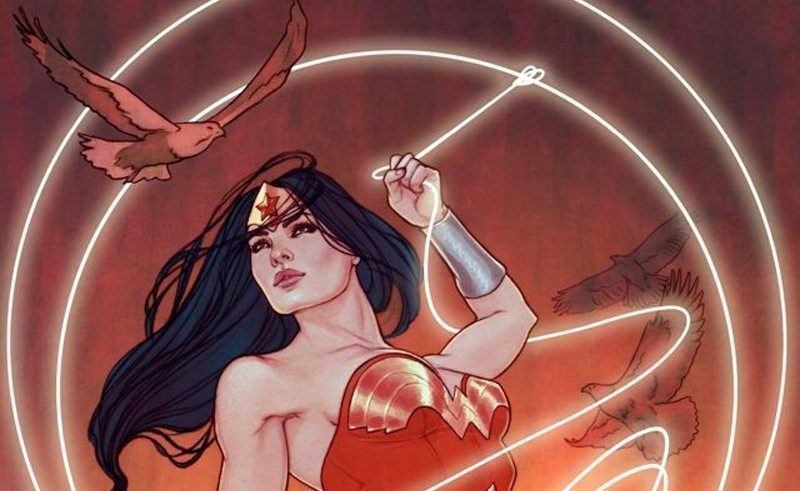 Few heroes demand absolute attention like Diana of Themyscira, Wonder Woman. This is mostly because few heroes will blatantly commit murder for the sake of the greater good like she would. BATMAN VS. SUPERMAN introduced many to the live-action feminist hero and her feminist morals. Though both beautiful and nurturing, Diana is a dangerous adversary with a unique symbol. While she does wield swords, like any warrior, Diana is defined by the infamous golden Lasso of Truth, an artifact of Grecian legend.

INTERESTED in the Symbolism of Captain America’s Shield? Click Here for the First Installation in the Successful Symbols Series!

The Lasso is an unbreakable elongated rope made of golden twine.  The Lasso implies versatility, while most non-offensive objects seem to imply passivity—since they can’t be used to inflict harm. It can be used for passive actions such as tying up an adversary, or active actions, such as suffocation by lynching. Wonder Woman’s use of the golden lasso was instrumental in disarming Darkseid in JUSTICE LEAGUE: WAR. She brutally blinded the dark god whilst he was choked with the golden lasso. She made one of the most powerful men in the omniverse a prisoner to her might. However, though a powerful weapon, the Lasso’s true definition has a far more personal meaning to the heroine herself.

The Lasso of Truth has many origins. Hephaestus built the lasso and gave it to the sister of Hippolyta, Antiope, in many of the stories. After Antiope leaves, Themyscira embarks on a quest for vengeance after renouncing the gods—who allowed Hercules and his men to rape and pillage the Amazons. The Lasso of Truth was later passed down to Wonder Woman from her mother, Hippolyta, when she embarked to the world of Man. The weapon has since become an innate conduit of Wonder Woman herself. It was bequeathed to Diana just as she adopted her mantle of Wonder Woman, champion to all Amazons of Themyscira.

CLICK: Want an Exploration of the Symbolism in Thor’s Hammer, Mjolnir? Click Here for Thor’s installment of Successful Symbols!

Physically, the Lasso is an ancient, historical object that has never been seen in the social ways Wonder Woman uses it. However, it has appeared in any culture dominated by agricultural gain in different ways. Some might say cowboys are similar, but that is a stretch. Spaghetti Westerns stereotype cowboys as lasso-wielding enforcers of the law. But, there is no actual evidence that cowboys incorporated lassos in combat.

Cowboys used their lassos to herd. This was their original and practical function. Further, there is no evidence in any other culture that a lasso was used to augment close-quarters combat.

However, the Lasso has an important social context. Namely, its significance in matrimony: the wedding cord. Historically, the wedding cord serves to unite man and woman for all eternity, joining two separate lives into one. Many regions practicing Christianity observe this tradition. Albeit a seemingly archaic ritual implying the subjugation of the bride, it is actually not the case. It is the groom who is often “lassoed” first by wedding participants or clergy—but most often, by the wife. Afterwards, the woman is bound to her groom, and man is anchored safely by woman. The cord is joined around both people’s wrists, pressed against their pulses, simulating the linking of heartbeats. The similarity is notable, as the Lasso of Truth simulates the blood pressure test like a lie-detector test applies to the wrist/pulse. Further, the wedding knot’s dependence on female strength invokes the same female empowerment that Wonder Woman represents.

CLICK HERE for an In-depth Look at How We Could Fix the STAR WARS‘ Franchise and It’s Infamous Prequels!

The Lasso also refers to the hangman’s noose when given a violent perspective. A noose represents binding, confinement, and restriction for criminals or violators of some social rule. It’s a tool for punishing those who violate the law or humanity’s rules. This is because suffocation is the slow, agonizing loss of life and also reflects repentance for crime. In dreams, suffocation is symbolic of an overwhelming external force. The symbolism of the hangman’s noose is vital to Wonder Woman, and not because she often employs the incarnation of the lasso in combat. Wonder Woman must uphold justice at all times. After all, she is a superhero. She can’t merely destroy whomever she wants. She protects the innocent and prosecutes the guilty.

The hangman’s noose is a harbinger of death. That is, a “just” death. Though death is a severe punishment, it is a universal symbol for brutal honesty. It is a long-standing truth that death does not lie. The Lasso is an active weapon, because of the actions required to make the Lasso: the tying of the knot. Knots are cognitively associated with confinement and inaction, and thus a knot inspires thoughts of activity in others. It binds anyone and renders them inactive under another’s will. It restricts freedom from others. The Lasso turns others into an unwilling slave to the will of others because of its defining attribute of removing power.

Wonder Woman: the Woman and the Weapon

Wonder Woman’s physical applications of the weapon are astonishingly unique. The multiple definitions of the Lasso reflect the versatile personality of Wonder Woman and all of the things she stands to represent. Primarily, it is a substitute for her femininity as a non-phallic weapon. It rejects the masculine archetype entirely because it does not penetrate or inspire an allusion to power. It does not dull or dampen in the way a sword or metal weapon would, instead it also connotes eternity: a figure eight, or a circle.

Not only invoking the comparison to the noose or the wedding cord, Wonder Woman’s Lasso is an instrument of justice and honesty. The Lasso is able to compel involuntary honesty from those bound by it. This is an allusion to the blood pressure tests which inspire the artifact. Much like the wedding cord, the rope alludes to the act of detecting the heart’s pulse by constriction. A polygraph attempts to read the truth by measuring the acceleration of a heartbeat. The motif of honesty is similar to the wedding cord: they subject men first. The Lasso inspires the subjectivity of male whims and masculinity toward womanhood. Anytime Wonder Woman uses the tool, it is as an anchor.

In combat, Wonder Woman wields all of these real life symbols and allusions simultaneously. Wonder Woman uses the length of the rope to counter incoming blows and yank enemies closer to herself. She uses the weapon offensively to suffocate or ensnare.

CLICK: Love Bad Boys? Read about how television’s most infamous Bad Boys and why they ultimately don’t pan out!

Actively, Wonder Woman betrays the social norms of the symbol. By creating new uses in combat, Wonder Woman reinvents the object. She makes it active, rather than merely passive. She symbolizes attribution rather than the retribution. Further, Wonder Woman’s many uses of the Lasso is intrusive. Lassos are often used on cattle. By subjecting enemies to her lasso, she dehumanizes them. This is also shared in the Lasso’s ability to force truth and honesty from those bound. Her opponents become submissive to her power.

Wonder Woman’s combative expressions are statements of her feminism. The direct and active nature of her combat skills are fundamental as symbols of female empowerment. She subjects the violent and oppressive with the Lasso, using aggressive and instrumental maneuvers. Enemies whom are expressively evil surrender to her feminine power. Rather than being apologetic or subtle, Wonder Woman’s attacks are direct and to the point. Further, Wonder Woman is an Amazon, who are traditionally powerful women because they imitate the masculine image. However, she subverts the male gaze by embracing different “feminine” themes similarly to how her Lasso subverts themes of weaponry.

The Lasso evokes both the womanhood and warrior nature of Wonder Woman. Its versatility lends to this duality, and its powers are a re-enforcement of her will. The Lasso symbolizes the truth that is Wonder Woman and womanhood. That a woman is never just one thing – such as a warrior, mother, or lover – but many things. This is in the same way that the Lasso of Truth is many things: a hangman’s noose, a wedding knot and a rope. In the times that Wonder Woman desires, the Lasso is also a conduit for universal truth, like the truth that a warrior is an enforcer. She enforces a brand new sentiment and way of life with every challenge. The Lasso binds her opponent and suppresses the falsehoods and illusions the same way that the Lasso subverts the monotonous gender roles expected of Amazons—and women.