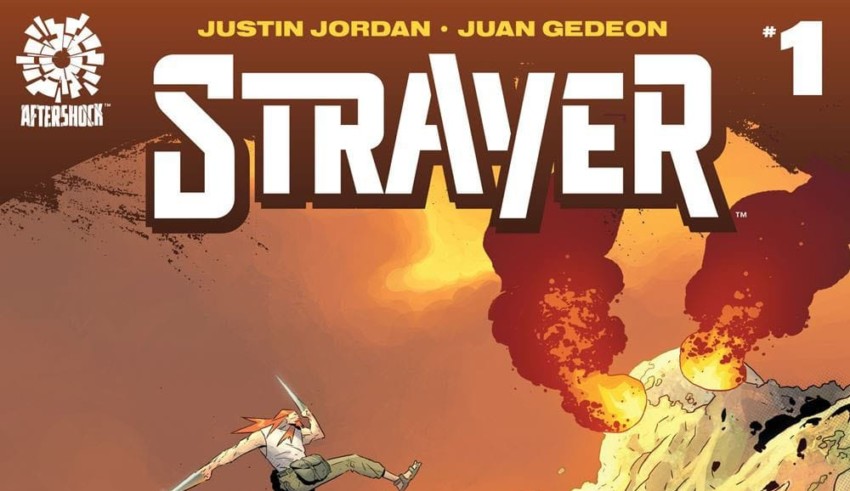 The STRAYER is almost like THE SEVEN DEADLY SINS manga. Here we have a story where our main character is saving someone or something and can’t do it alone. That person then gathers an unlikely team of “heroes” who work together in order to stop some bad guy and save the world. It’s a bit cliché, but it works. I really enjoy these types of stories, even though the market is flooded with them. One thing that I think works for STRAYER is the art. It was the cover alone that sold me on it. With a little more tweaking of the story, I think it could be a big hit. STRAYER definitely has potential.

In a world where metal and magic are the most valuable resources, there comes a story about a woman named Mala Tenboom who’s trying to revert the world to its original state. With the world now engulfed by Bandits, Kashas, Creepers, and Titans, the people of this world no longer believe it is possible to go back to the way things once were. With the help of a man referred to as the “Strayer,” it just may be possible to go back to a past that now seems like a distant dream.

READ: Want something a little different? Take a look at some of our other reviews of Indie Comics!

What really drew me into this comic was the cover art. It depicts a man who’s wielding blades in both hands as he leaps toward a giant monster with the intent to take it down. Overall, I was somewhat satisfied and will most likely be picking up the second issue of STRAYER. My only objection to this book is that the introduction was a bit unclear. We have one of our protagonists, Mala Tenboom, trying to recruit people in an effort to restore the world. Unfortunately for her, most people liked to be paid in metal or magic instead of hopes and dreams. 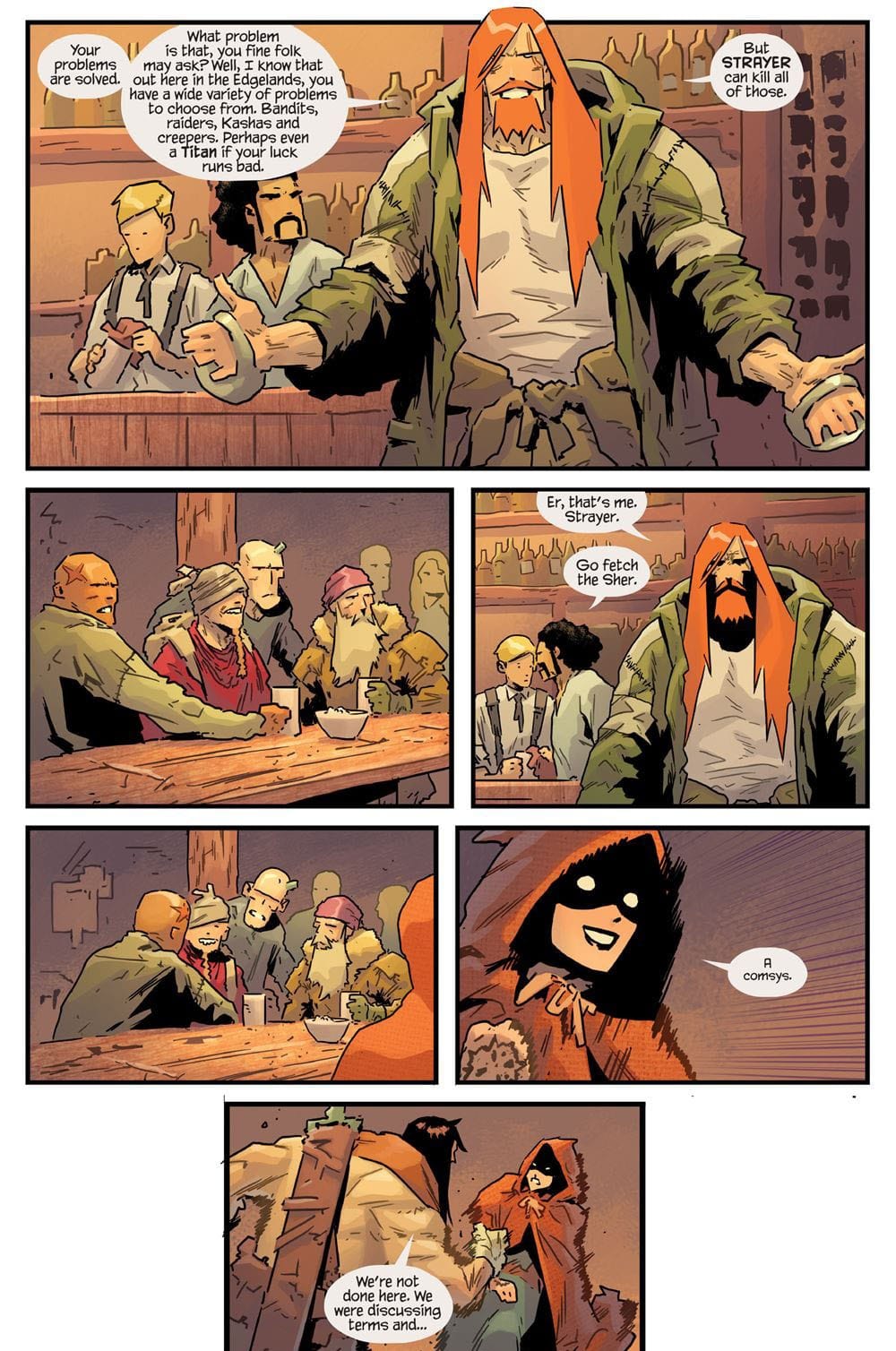 The beginning was off to a confusing start, but the book picks up about a quarter of the way through with the introduction of our next protagonist, Strayer. The Strayer resembles a Scotsman with his long orange hair and beard and large body as well. When first introduced he comes off as a show-off exclaiming that he can take care of any problem that anyone has. To his luck though, he gets hit in the head with a bottle, and on the next page, winds up in jail. What happened? Did he get into a fight and lose? We’re shown in the book how strong he is. So it seems unlikely that he’d lose a fight right off the bat. It’s after he is released from prison that we see an awesome battle between the Strayer and a Titan. 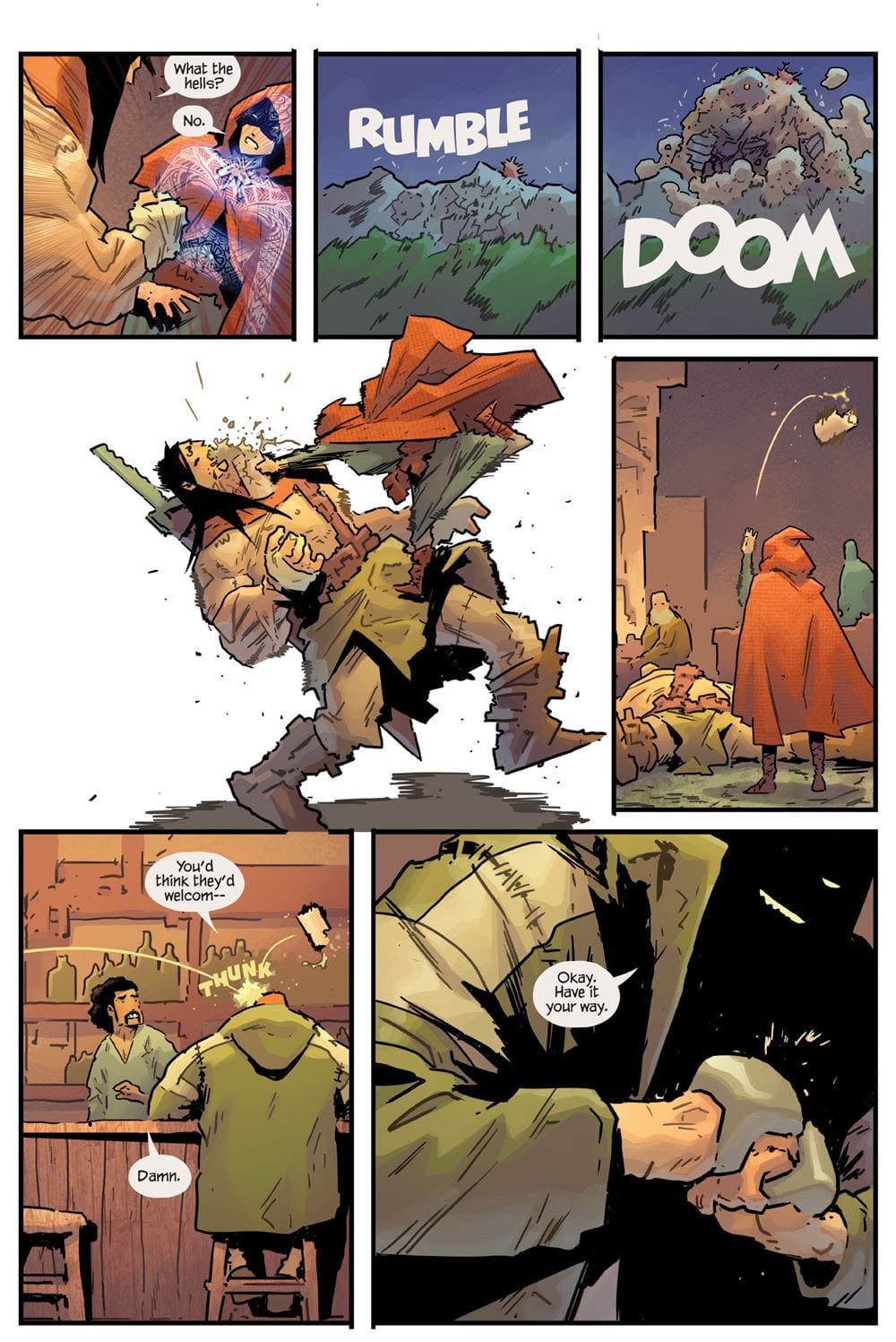 Writer Justin Jordan, who’s known for breaking into comics with his book, THE STRANGE TALENT OF LUTHER STRODE, writes a good story about a woman trying to reclaim her world. As I had mentioned earlier, it’s easy to get lost about a quarter of the way in. This story shows promise, but I would enjoy it more if we were given some more information on who and what the Strayer is. Instead, we’re given more info on Mala, who is an important figure in this story, but we’re not given enough on the man that this story is named after.

Artist Juan Gedeon, who broke into comics with his illustrations on GHOST RACERS for Marvel Comics, portrays the story of the STRAYER in a simplistic yet appeasing style that leaves me hungry for more. Looking over this comic, I was impressed by the art. As an artist myself, I always look for good art before the story to see if it’s worth reading; that’s just how I am. His style goes well with Jordan’s writing and it’s what I think is pushing me towards buying the next issue.

Colorist Tamra Bonvillain who’s currently coloring books such as RAT QUEENS, MOON GIRL AND DEVIL DINOSAUR, WAYWARD, and more, does a terrific job showing the true colors of this post-apocalyptic world. Finally, letterer Rachel Deering, who’s an Eisner and Harvey award-nominated writer, editor, and letterer, most known for her writing in CREEPY, brings to us lettering that, for once, isn’t all in caps; it is a style that suits the era in which the STRAYER lives. 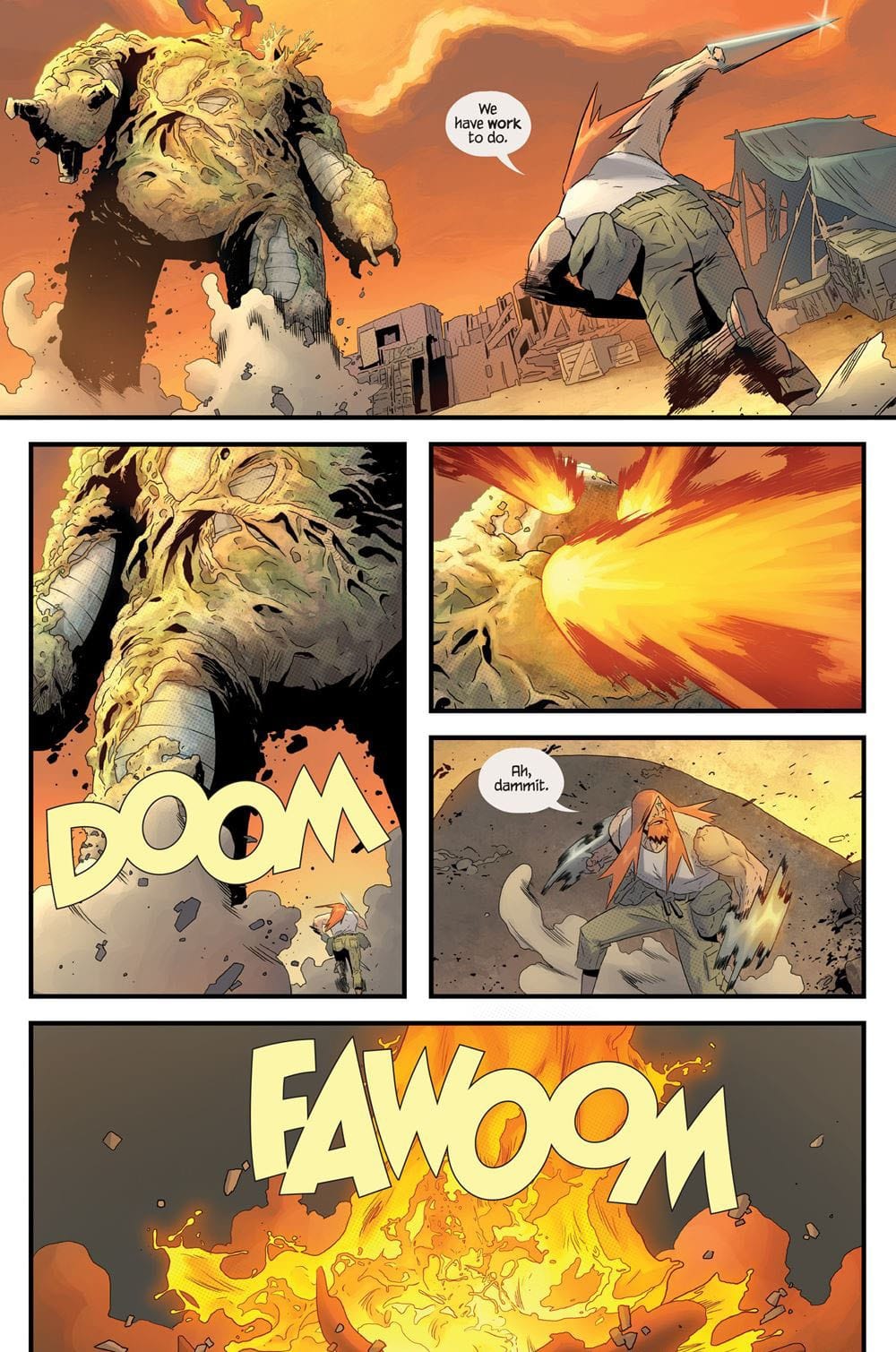 Overall, characterization for this first issue wasn’t bad, but it could have been expanded on a little more. We learn about Mala Tenboom right from the beginning all the way until the end, but what about Strayer? We’re not even sure if that’s his real name. This is a good thing. The writer has left me with more questions than answers, which is one way to get me and most readers to buy the next issue (which I will).

At the end of the day, I can say that I recommend this book for anyone that likes a badass Scottish-looking dude who beats down on some odd mountain/volcano/machine-looking colossal titan that spews lava.