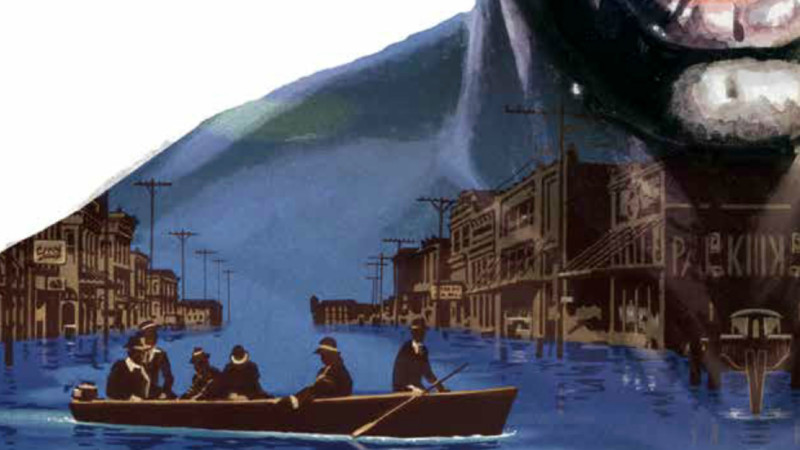 One day, you realize your idols are not who you thought they were. Some don’t share your political opinions, others have committed crimes, and some turn out to be plain old jerks. I know it’s happened to me a few times. (Dammit, Orson Scott Card.) There comes a time when you try to separate the artist from their art. Perhaps it’s just a coping mechanism. Good art is one of the best things on this Earth, and a morally ambiguous author shouldn’t stop you from finding the next book that gets you through a harrowing time. But sometimes, the identity of the author weighs down on you. Can any of us really watch THE COSBY SHOW the same way again? There are gray areas in this discussion and plenty of questions to be raised and never fully answered. One thing STRANGE FRUIT has definitely done is raise questions.

This comic is largely about race in 1920s Mississippi, though it throws in some supernatural elements here and there. It created a lot of controversy when people learned the creators were Mark Waid and J.G. Jones, two white guys. Readers found themselves asking, is it okay that a graphic novel centered around race is created by white people? Some people were hopeful because we don’t get to see many racially-centered comics pushed to publication. Nevertheless, shouldn’t black authors be at the front lines when handling a black-centric tale? Black voices are noticeably absent in the comics industry, and there has been a messy history of white people writing black stories. In order to address various angles of STRANGE FRUIT, I will discuss the comic and the controversy around its authors separately. First, let’s discuss the work of art with its author’s removed. Warning: spoilers for all of STRANGE FRUIT. 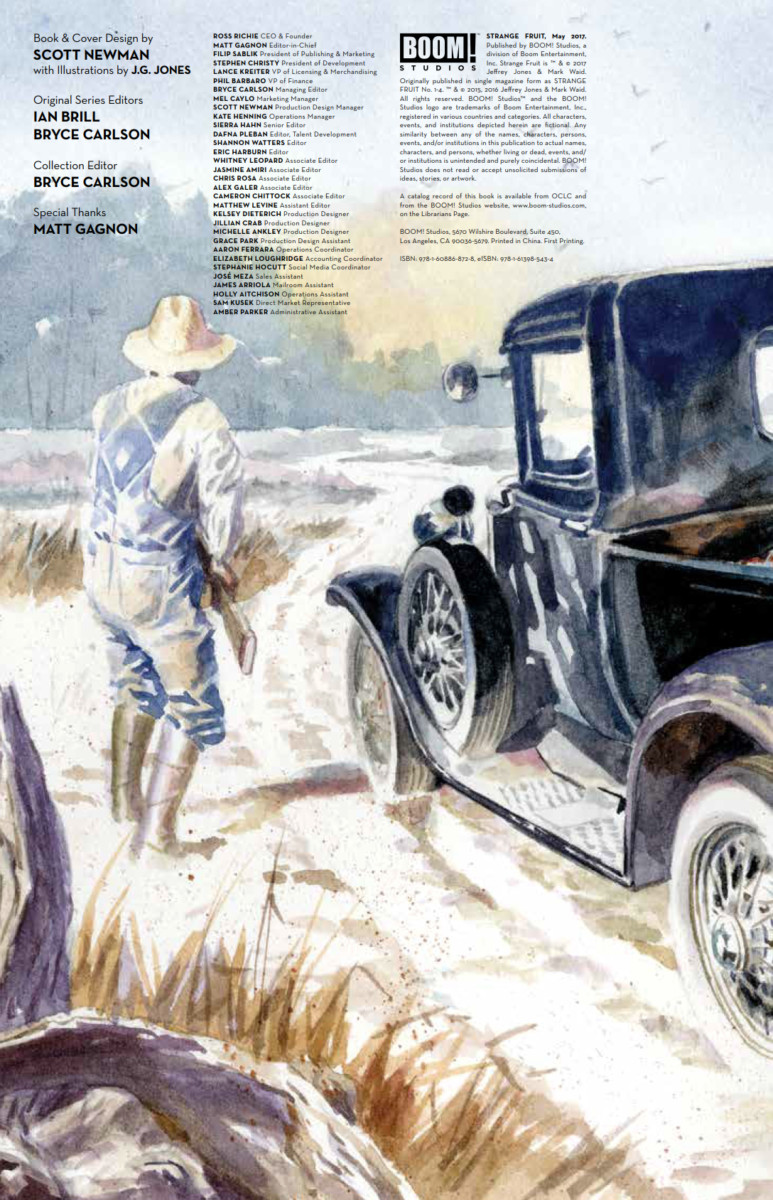 Reversal of the White Savior Trope

In so much literature and film, we often see an overused trope of a white man coming to save all the people of color who need their help. Films such as THE LAST SAMURAI, FREEDOM WRITERS, AVATAR, and THE BLIND SIDE come to mind. A single story about a white person helping a community of color isn’t too harmful. However, when it’s used over and over again, it perpetuates the trope that people of color are helpless. That they need the white man to solve their problems.

However, in STRANGE FRUIT, the white savior trope is reversed in every way possible. This year is 1927. An incredibly strong, black alien saves the racist town of Chatterlee, Mississippi from an incoming flood. Admittedly, there are many disenfranchised blacks living in Chatterlee, along with sympathetic whites. But essentially, a black alien saves a town set against him. And I loved it because it really doesn’t end well. The black alien doesn’t know about the history between blacks and whites in this strange place he landed in. He’s a metaphor for the naive rhetoric of catering to racists in order to make progress. He saves this town, regardless of everything they put him through, and what does he get in return? 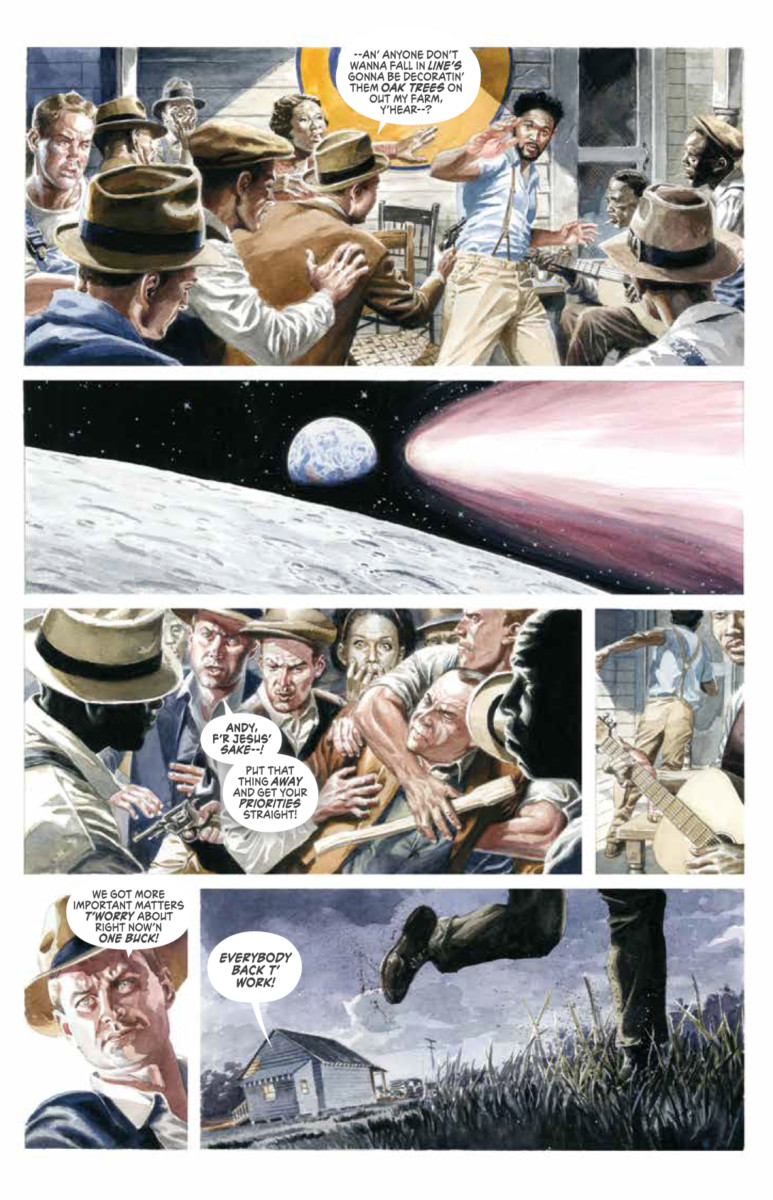 People who are more in the center of political ideas (i.e. most Americans) urge minorities to scale the empathy wall and just talk to people on the other political side. Yet, when the other side is drenched with racism and sexism amongst other prejudices, we often are risking everything to try and make a small change. We are the black superhero attempting to bridge a fatal gap. And just like in STRANGE FRUIT, after we do so much, they kill (Martin Luther King) or demonize us (Malcolm X).

It’s truly haunting at the end when reel footage rolls of a news show talking about Chatterlee after the flood. The news crew gives credit of saving the town from a flood to the “community leaders.” The white ones, presumably, as no blacks led the community at that time. The black alien has died, and his story was erased, just like the many black bodies that were before him.

Overt Symbolism or Deeper Meaning?

In this comic, there are a few panels that are truly striking. Most notably, the black alien wearing a confederate flag as a loincloth. He comes to Earth completely naked and ends up needing clothes at some point. And alas, the only thing lying around is a confederate flag. It’s all at once funny, cruel, and confusing. Here is this man that doesn’t know what this symbol is, or its history. Yet, he wears it on his black skin. This scene could be making a mockery of the flag, or simply reminding us that outside of Earth, our petty ideologies have no inherent value. They are blank pages; symbols which mean nothing.

READ: Interested about race in comics? Read our take on the DOCTOR STRANGE whitewashing controversy!

Another moment that caught me was the carrying of a church. The alien saves many humans’ lives by pulling along a church over the flooding waters with just a single rope. This reminds me of the history American black communities have with religion. Here is something that was forced onto them by their oppressors, yet now it’s something that they choose to save for the future. Whether this metaphor is positive or negative, I’m not sure. But it opens up so many opportunities for discussion and critique of things we often take for granted.

I enjoy a comic that has enough depth to welcome different interpretations of its content. When I look at STRANGE FRUIT outside of who created it, I feel positive in its portrayal and in fact, optimistic about its radical ideas that I absorbed from it. However, we can’t ignore the creators in a thorough analysis of their work.

The title of this mini-series is a reference to a Billie Holiday song about lynching in the South. The strange fruit is, of course, the horrific display of murdered black bodies. Already, the name of the comic is uncomfortable. I believe Waid and Jones set out to make an uncomfortable comic, which I applaud them for. We need more conversations about race, and especially ones that cause discomfort. Unease leads to change and discovery about ourselves and our interactions. It’s a crucial part of the ongoing dialogue about race. Yet, when people confronted Waid and Jones about issues they had about the comic, this discomfort was the very thing they ran away from. There was no discussion. 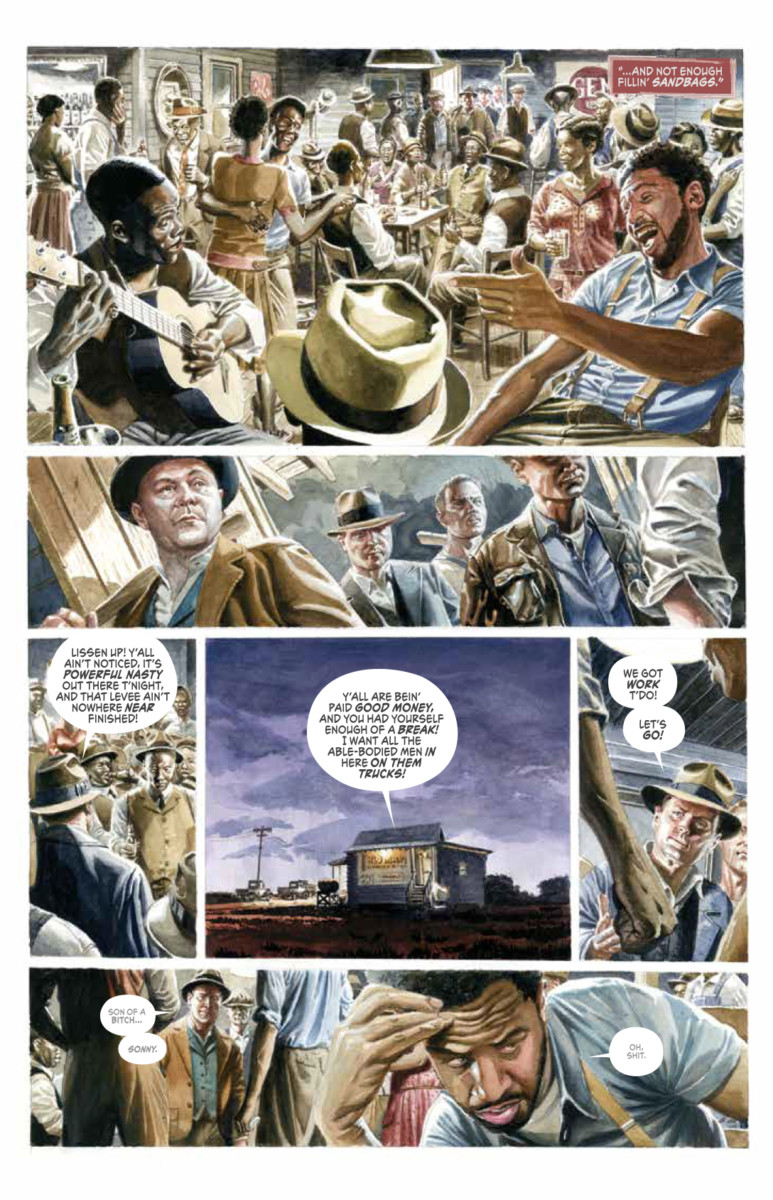 A White Savior Story in Disguise

This is the story of a black savior, but I wonder if it was anything but a white savior complex in real life. Waid and Jones expressed their need to tell this story, to do their part. Yet, they did not push for black creators on their team. They refused to acknowledge the lack of black writers in the comic industry.

LISTEN: Wanna learn about more examples of racial metaphors in comics? Check out our podcast on The X-Men!

If I were to be pessimistic, I would say they wanted to write about race in a safe way in order to ease their white guilt. It’s easy to write about race in the 1920s, in Mississippi, and to make your white bad guys members of the Klan. You’re not losing a lot of readers. You look like a nuanced comic writer who can safely weave together comics and race. Just as the people in Chatterlee use the black alien for their own gain, so did Waid and Jones. But while that cynicism may be true, I hope it isn’t.

If I were to be optimistic, I’d say that they want to use their position of privilege to tackle racial issues. This was the only way they knew how. It’s a scary world out there for people talking about controversial issues, and they wanted to make sure they could discuss race without alienating (no pun intended) their readers. It’s a good step towards progress in comics.

I have contradictory thoughts about this as you can see, and these are nuanced issues. I’d suggest you read the comic and come to your own conclusions, keeping in mind that the art isn’t always the artist. Though in some cases, it certainly can be.