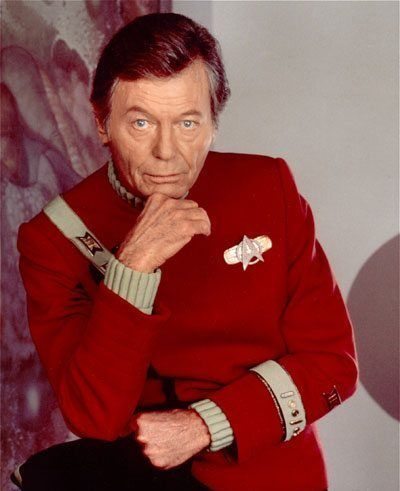 Kelley, as an older cinematic Bones

The year 2016 marks the 50th anniversary of the seminal science fiction series STAR TREK. Over the course of five decades, the franchise has produced a combined 28 seasons of television, 13 feature films, and countless pieces of tie-in media (such as novels and comics). While Gene Rodenberry’s vision of a future utopia has had a lot to do with that enduring success, the series’ characters have had a great deal to do with it as well.

READ: Have a look at the first part of this series, focusing on the franchise’s captains.

From a character standpoint, the original STAR TREK was primarily built around the Kirk/Spock/Doctor McCoy triangle, as they often sparred over what course of action to take in any given episode. These three, especially Kirk and Spock, became deeply ingrained in the pop culture lexicon and gained further prominence as the franchise evolved into films based on THE ORIGINAL SERIES. Spin-offs such as THE NEXT GENERATION diversified their respective casts, but for the most part kept these archetypes in place, even as they played with their fundamental characterizations.

As we’ve seen over the first two installments of this series, the role of captain and alien other have been, in one form or another, integral to every iteration of STAR TREK to date. The third role of the original main triangle, the doctor, hasn’t been as lucky. Over the course of the spin-offs, some doctors have been important characters central to the on-going narrative, some comic relief, some tertiary, and some defined by something other than their role entirely.

If STAR TREK THE ORIGINAL SERIES (TOS) was truly the “wagon train to the stars” western that Gene Rodenberry famously described it as, Leonard “Bones” McCoy was the country doctor. As played by Deforest Kelley, McCoy might have been the most relatable of the original main trio to average viewers. While Captain Kirk was the noble leader/adventurous action hero and Mr. Spock the cold, emotionless alien, McCoy was simply a man who felt space was dangerous. Though he was a master at his medical craft, he immediately thought the worst of nearly every situation the Enterprise came across, and even had an inherent distrust of technology. This would lead to the development of the character’s oft-imitated catchphrase, “I’m a doctor, not a (insert term).” This attitude manifested in McCoy’s famous arguments with Spock, as the two polar opposites would verbally spar with each other often, with Kirk stuck in the ideological middle. It also should be noted that during the run of TOS, McCoy was Kirk’s closest confidant on the ship, even more so than Mr. Spock. The two characters were often seen drinking together, with the good doctor providing advice to the captain.

As the TOS film series began, McCoy’s role was slightly altered. As Spock was made more sympathetic and his dynamic with Kirk was highlighted more, the doctor receded to the background a bit. He became more of a secondary character, usually stealing scenes he was a part of (such as his arrival on the Enterprise in THE MOTION PICTURE) but generally not being a driving force in the plot. The major exceptions are the third film THE SEARCH FOR SPOCK and the sixth film THE UNDISCOVERED COUNTRY. In the former, it’s revealed that Spock had imbedded his soul in McCoy before his death in WRATH OF KHAN. Kelley clearly has a blast playing an amalgam of the two characters, subtly switching between the two throughout the film, sometimes even between lines. In the latter film, McCoy is arrested and imprisoned along with Kirk. It gives the two characters a chance to revisit their original bond before the series ends.

On the surface, STAR TREK THE NEXT GENERATION’S (TNG) Doctor Beverly Crusher is the opposite of her predecessor. As opposed to McCoy, Crusher (portrayed by Gates McFadden) is a mother with a kind manner who enjoys space exploration. However, under the surface the two share something major in common: they are each their captain’s main confidant. As the series begins, Crusher is presented as an old friend of Captain Picard, and the only crew member he sees an equal. During the first season, it is Crusher who keeps Picard in check and it seemed like the show might develop the same character dynamics that TOS did. Unfortunately McFadden left TNG following the first season due to a rift with the producers. After a one-season stint from Diana Muldaur as Katherine Pulaski, a McCoy knock-off who never gelled with the other characters well, McFadden returned. By then the series’ dynamics had shifted, however, leaving Crusher as the odd-character out for the rest of the show’s run. Through the TNG films, McFadden’s screen time lessened even more, to the point where the doctor was a tertiary character by the 2002 release of the final TNG film NEMESIS.

When STAR TREK: DEEP SPACE NINE (DS9) launched in 1993, the series attempted to reinvent several elements of the STAR TREK mythos, one of which being the traditional doctor role. Instead of the experienced McCoy or Crusher, DS9 had the young and brash Julian Bashir played by Alexander Siddig. The character is presented as the 24th century equivalent of a prodigy, a young man who breezed his way through Starfleet Academy and is excited to begin his career in space. However, Bashir’s character was initially a bit of a failure. The hyper-smart, know-it-all characterization was not popular among fans, and the character played a mostly secondary role throughout the show’s early years. The producers attempted to course-correct the character about midway through the show’s run. They altered Bashir’s backstory, having his intelligence be the result of genetic engineering, and later involving him with the rouge Starfleet spy agency known as Section 31. While these developments were interesting and gave the character depth that changed him for the better, it was a bit too little too late as far as making Bashir a main character.

The doctor role returned to the forefront in STAR TREK: VOYAGER. On the series, Robert Picardo portrayed the Emergency Medical Hologram (EMH) known simply as The Doctor. Initially activated simply as a tool to take over for the deceased Voyager doctor, the EMH developed his own distinct personality. In the hands of Picardo, the character became one of the most interesting in the history of the franchise. Like Data, he yearned to be more human. Unlike TNG’s android, however, The Doctor was actually able to pick up various human behaviors, eventually developing human traits, including a love of opera, writing novels, and a biting sarcastic wit. When Seven of Nine was introduced, she and the EMH developed an instant bond, as they helped each other better understand their shipmates. Due mainly to Picardo’s popularity, the character became the first breakout of the series and was (along with Captain Janeway and Seven of Nine) in the trio of most important characters the show had.

After the success of The Doctor, one would think that the next STAR TREK series would once again make its doctor a major character. Surprisingly, STAR TREK: ENTERPRISE didn’t go in that direction. Instead they introduced the character of Doctor Phlox, played by John Billingsly. Initially, Phlox looked like a promising character. The concept of an alien doctor who was much more knowledgable about the cosmos sounded interesting, considering the prequel nature of the series. However, Phlox was used as little more than comic relief for a majority of this show’s run, unfortunately leading to him feeling like a wasted character.

The alternate universe (officially known as the Kelvin Universe) reboot film series that began with 2009’s STAR TREK brought Doctor McCoy back to the forefront. Karl Urban played the reimagined version of the first Enterprise doctor, combining Kelley’s wit and general personality with a new, somewhat darker, divorce-centric backstory that puts a pain underneath its cutting wit. The first film establishes Kirk and McCoy as Academy friends, with the two initially taking the same side against Spock. As the film series progresses, the traditional triangular relationship between the three develops. The third film in the series, STAR TREK BEYOND, proved to be the most McCoy-centric of the three. The doctor is not only shown drinking with Kirk just as they used to, he also spends a majority of the film marooned with Spock. This allows Urban and Zachary Quinto to really explore the McCoy/Spock dynamic beyond just trading barbs with each other. The two characters eventually realize they share a deep mutual respect for each other. Urban’s McCoy takes the fundamental template established by Kelley, and reworks the character to fit a darker backstory and more modern sensibility.

READ?: Like what you’ve read? Check out the second part of this series, focused on the Alien Other.

While the doctor archetype has not been as well defined or often focused on as the captain or the alien other, when used right it has become one of the most enduring in the Trek canon. TOS, early TNG, later DS9, Voyager, and STAR TREK BEYOND all show this to be true.