For those who are neither 80’s kids nor hardcore Jim Henson fans like yours truly, THE STORYTELLER was a short-lived television show that aired in the late 1980s. Every episode, the Storyteller sat by the fire with his talking dog companion and spun a tale. These tales were adapted from traditional, but lesser-known, Western folklore. The tale was portrayed through a combination of live actors and puppets and each episode ended with the Storyteller summing up the moral takeaway. Despite being short-lived, THE STORYTELLER was critically acclaimed and forms a piece of the extensive legacy that Henson left behind.

READ: Want another comic based on a beloved television series? Read our review of ADVENTURE TIME: ISLANDS!

THE STORYTELLER: GIANTS #1 is the first issue in a four-part comic anthology based on the format and characters of the television show. The comics have been divided into thematic anthologies. Not only does choosing a theme allow the anthology to be unified by more than just the format, but it makes a point about folklore. Not only do all cultures tell stories, but these stories actually have a lot in common. Furthermore, all of these stories have a lesson we can learn from them. All four issues in this particular series are unified by the theme “giants.” THE STORYTELLER: GIANTS #1 is titled “The Peach’s Son,” with the story and art by Conor Nolan.

In this tale, a peasant woman happens upon a giant peach. After bringing it home to her husband, the couple discovers a giant baby inside and they raise the child as their own. As the child grows bigger and bigger, the townspeople begin to believe that he might be a threat to them. To prove himself to his suspicious neighbors, the boy agrees to take on a band of ogres who have pillaged a nearby town. Along the way he meets a dog, a monkey, and a crane, who agree to help him defeat the ogres.

READ: Hey Jim Henson fans! We interviewed Ramón Pérez, one of the creators behind Archaia’s adaption of TALE OF SAND!

“The Peach’s Son” is a retelling of the Japanese folktale “Momotaro.” It’s refreshing to see part of THE STORYTELLER franchise cover an eastern folktale, as the original television series covered only Western folklore and Greek myths. A more inclusive take on the original series is a much welcome addition to Jim Henson’s legacy. It was also an intelligent choice to start GIANTS with a story where the giant is the protagonist, as it flips the common perception of a giant as the antagonist on its head. 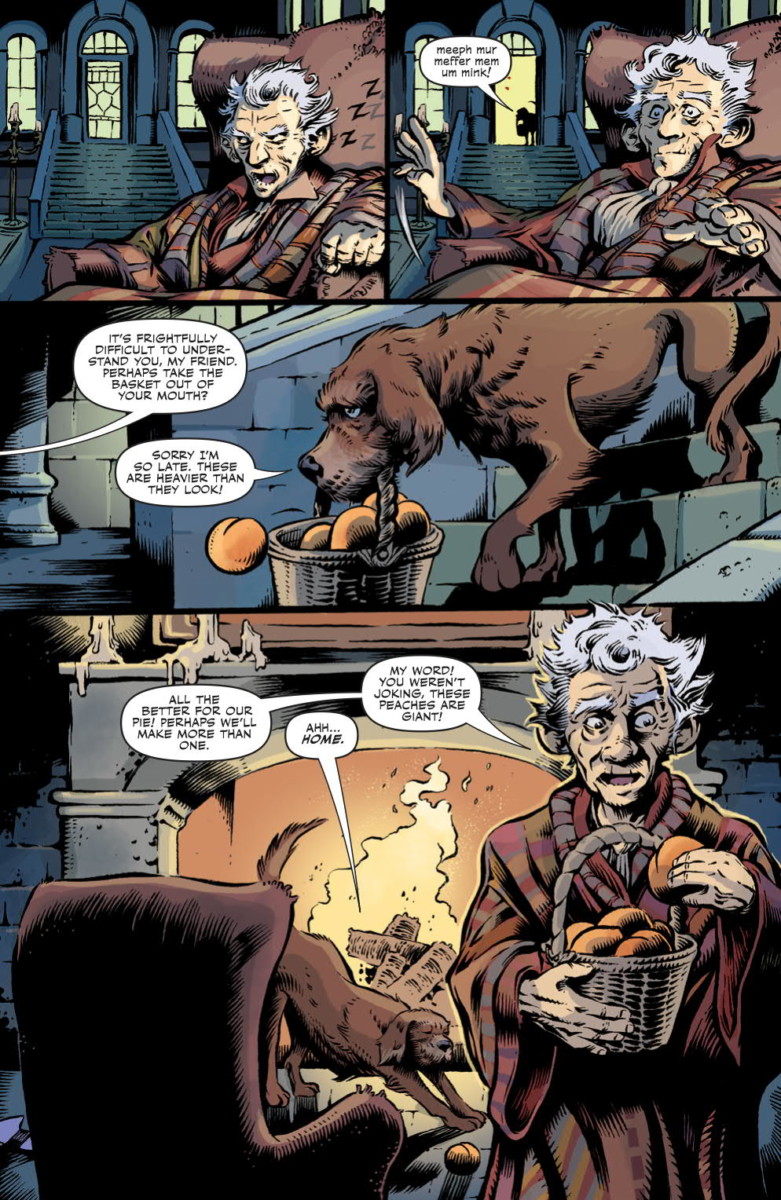 The biggest hurdle THE STORYTELLER: GIANTS has to overcome is how to give the comic the same feel as the television show. This is partially accomplished by following the same format as the show. It begins with the Storyteller in front of the fire with his talking dog, who segues into the narration of the story and ends with the Storyteller as he sums up the message of the story. The format not only creates direct continuity between the comic and the television show, but I predict it will be effective in unifying the entire series. Since each issue will cover a different tale, the Storyteller and his dog will be the only familiar faces we see issue to issue.

The art also delivers a familiar feeling to THE STORYTELLER: GIANTS. The coloring specifically is beautifully done, adding a feeling of warmth that permeates the entirety of this issue. With this warmth, it’s impossible to read this comic and not feel good, much like the feeling of nostalgia you would get from watching the television series. 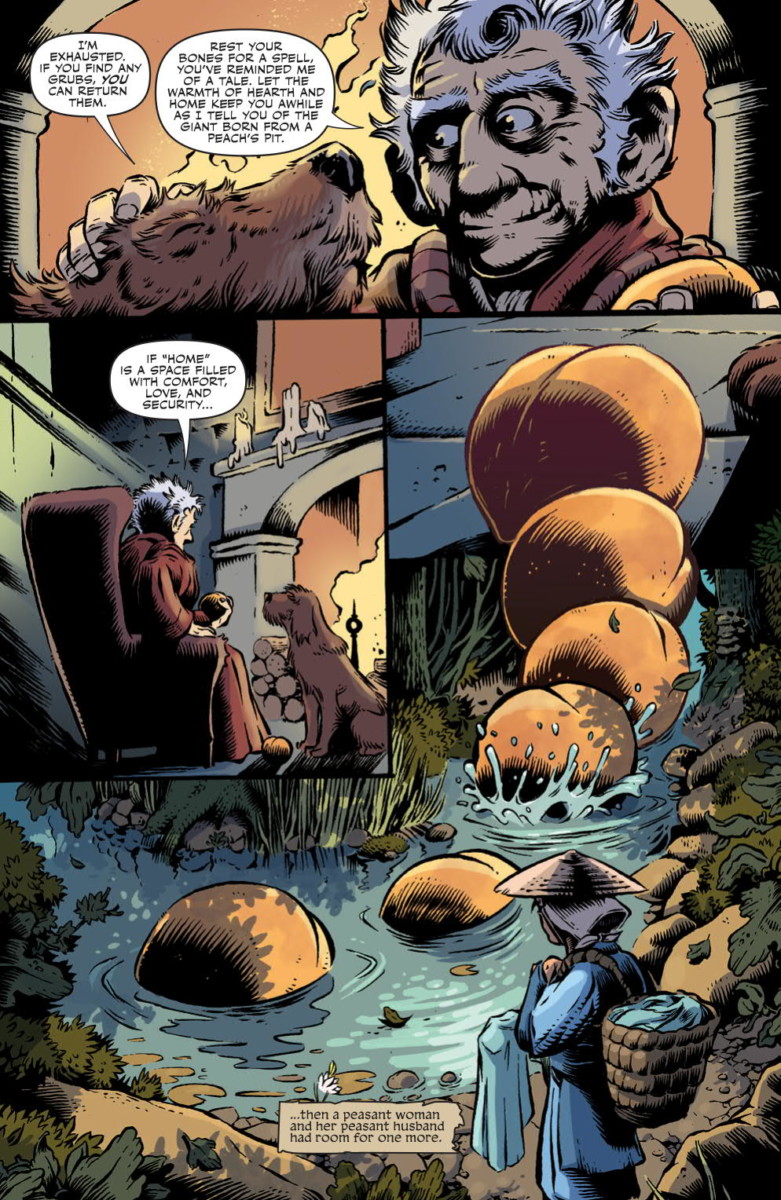 Being a creation of Jim Henson, the most defining aspect of the television show’s feel was, of course, the puppets. Unfortunately, there is no possible way for Conor Nolan to incorporate three-dimensional puppets into a two-dimensional comic. However, it is possible to create characters that evoke the same expressiveness and humor as Henson’s puppets, and this is exactly what Nolan does.

READ: Interested in Japanese folklore? Here’s our take on KUBO AND THE TWO STRINGS and THE TALE OF PRINCESS KAGUYA!

A character in THE STORYTELLER: GIANTS #1 that feels specifically like something Jim Henson would create is the monkey. When the boy first encounters the monkey, he is slowly shambling out of the darkness of the woods, moaning about how unfortunate he is as he begs for coins. The boy, not having any coins, casually mentions that the ogres he’s after might have treasure. At the mere mention of treasure, the monkey’s demeanor changes completely and he quickly transforms into his true energetic and mischievous self. This overly dramatic character with exaggerated body language is quintessentially Jim Henson. Hopefully, as THE STORYTELLER: GIANTS continues, the creators will find a way to put a little bit of Jim Henson’s humor in every issue.

There is nothing particularly groundbreaking about THE STORYTELLER: GIANTS #1. In fact, it’s exactly what you’d expect it to be. That’s kind of the point. Its tone is familiar and heartwarming, and its art is welcoming and beautiful. For Henson fans old and new alike, THE STORYTELLER: GIANTS #1 is an enjoyable, comforting read that effectively taps into this legendary artist’s creativity and humor.