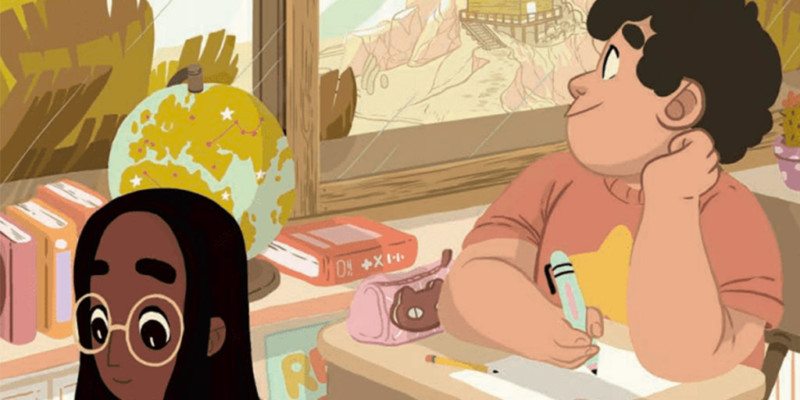 Cartoon Network’s original series STEVEN UNIVERSE, created by Rebecca Sugar, is always breaking new ground. From the first episode, it focuses on the racially ambiguous and proudly feminine half-alien Steven, who is raised by the Crystal Gems – three powerful alien mothers with different ethnic features and body types. And rather than simply using diversity as a background to say “Hey, we’re not racist,” STEVEN UNIVERSE actually takes the time to delve into the representational needs of different types of women.  While in other media, black women are relegated to the role of “slut,” Garnet teaches us about consent and romantic agency. While in other media, fat women are a joke, Rose Quartz is a beautiful and respected warrior.

The graphic novel STEVEN UNIVERSE: TOO COOL FOR SCHOOL (produced by Boom Studios) takes the series to a place it has never gone before: standardized education. As a longtime fan of the cartoon, I was excited to see how STEVEN UNIVERSE would explore intersectional feminist issues within this space. 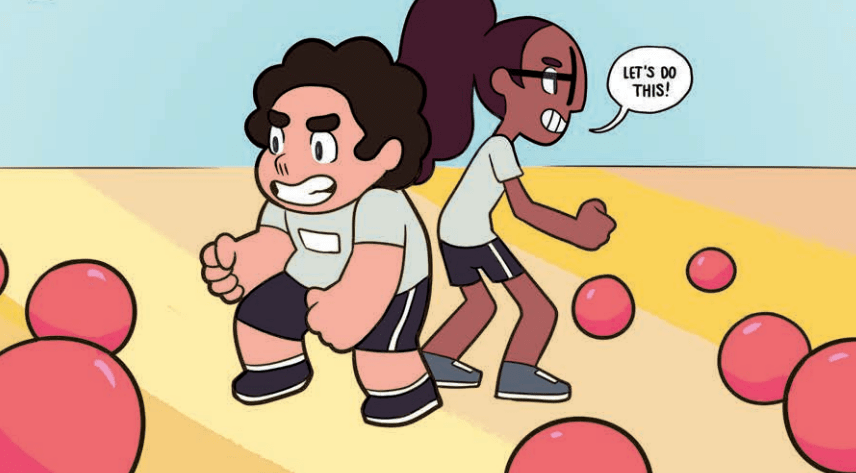 STEVEN UNIVERSE: TOO COOL FOR SCHOOL focuses on Steven’s best friend Connie, a shy Indian girl, as she takes Steven with her to school as a guest for Show and Tell. Home-schooled his whole life, Steven knows nothing about the school system and is experiencing it all for the very first time.

READ: Here’s what STEVEN UNIVERSE teaches us about handling flaws!

Steven does not really understand public school. Since he assumes that the teacher will treat him as an equal, he keeps talking back to her without raising his hand. Frustrated, the teacher sends him and Connie to the principal’s office. Connie laments that this will be on her permanent record and jobs will reject her in the future, which Steven thinks is unfair.

This grimly reflects real life, where students of color are highly more likely to receive detentions and suspensions over the same things that white students are excused for. Throughout the comic, Connie is routinely punished for Steven’s behavior whenever he mistakenly breaks arbitrary rules designed solely to maintain order (ex/ no food in class!). Eventually, this culminates in a scene where the principal wants to suspend Connie for trying to lead a dodgeball battle to take down an alien monster that Steven accidentally brought to school. 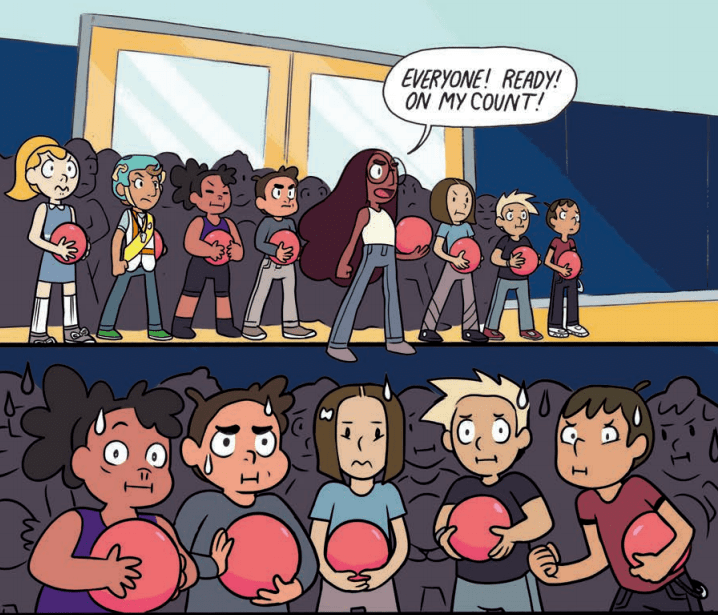 However, the one thing that seems to sway the principal is Connie and Steven both receiving perfect test scores on the final exam. Steven uses this to persuade the principal that Connie is just as smart as he is and shouldn’t be punished for his actions. The principal lets Connie stay on the condition that Steven is banned from the school grounds.

When Connie returns to school, the student body celebrates her as a hero for her leadership in battling the monster. She even gets a spot on the safety patrol. All is well.

Now, there are certain things this comic does a good job with. For one thing, it’s exciting to see Connie, who is typically quiet and nerdy, show off her leadership prowess and actually receive praise for it. As a female POC character, someone like Connie would normally be relegated to the sidelines, assisting Steven, the outgoing light-skinned male hero, as he saves the day. However, in this story, the roles are reversed. Steven assists Connie, who gets to be the hero on her own for once.

The comic also does a decent job at displaying the difference between Steven and Connie’s education. Connie has the societal awareness from a structured school system that Steven lacks. Meanwhile, Steven has the self-love and open-mindedness from his education with a feminist commune that Connie lacks. Ultimately, they learn the same academic content, implying that homeschooling and public schooling are equally affective at academic learning. 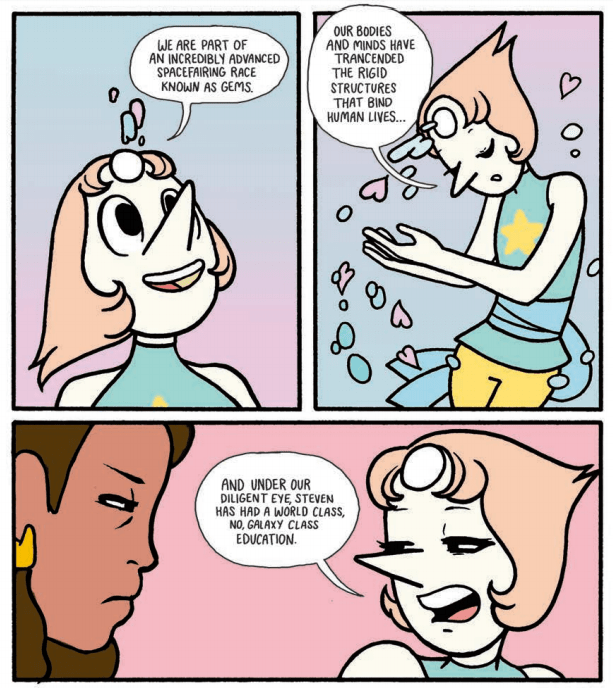 However, Connie’s environment is way more oppressive than what Steven is used to. The characters are quite vocal in pointing out how unjust the school is for its focus on punishing children. If the school had provided any assistance for Steven in adjusting to the school dynamic, he wouldn’t have been getting into so much trouble. And if the school had treated Connie as her own person rather than as Steven’s caretaker, she wouldn’t have to constantly leave the classroom to deal with nonsense in the principal’s office.

My one major issue with the graphic novel is the focus on grades during the climax. If Connie and Steven had done badly on the test, would Connie have deserved to get suspended? The scores seem pretty irrelevant in this scenario. Not to mention, it can be harmful to actual children to teach the message that their grades determine their worth.

It’s a lot harder for children of color to maintain high grades – and that’s not their fault! Real estate agencies keep POC families away from middle class neighborhoods, forcing students into low-income schools with no funding and shoddy school supplies. Teachers might have unconscious biases, such as perceiving darker-skinned children as older and punishing them more harshly at younger ages as a result. Or teachers might have more overt biases, like assuming a Latina student is plagiarizing an essay when she uses the word “hence.” And while coping with the trauma of prejudice, kids are more likely to act out.

Consistent punishments can keep children away from the learning environment, putting them at a disadvantage towards keeping their grades up. As punishments increase and grades go down, these students start believing that they really might be unintelligent and bad. They stop trying and don’t expect to do well. In fact, they might start acting out more just because they’re angry and feel hopeless.

The more this builds up, the harder it is to meet the requirements to access higher education, and, from there, to access decently-paying jobs. And the more likely it is for the suspensions and expulsions to turn into arrests and incarcerations. This is called the Pre-K to Prison Pipeline, and it’s one of the main systems that keeps people of color in poverty.

I think STEVEN UNIVERSE: TOO COOL FOR SCHOOL tries to address this problem. It does focus on the unfairness of Connie’s constant punishments and how Steven is able to get away with far more than her. And it illustrates a school culture that goes out of its way to punish students for really any reason at all.

However, by using the grades as a plot point, the story just dives right back into the whole narrative of good grades meaning good people, which allows for the counterpoint: bad grades meaning bad people. That is not the lesson an activist series like STEVEN UNIVERSE, which genuinely cares about the messages it sends to children of color, should be proud of teaching.

If the series really wants to fight the Pre-K to Prison Pipeline, they need to deconstruct the myth that grades are the defining measure of intelligence and moral integrity. Connie deserves justice, no matter what her grades are.