STEVEN UNIVERSE AND THE CRYSTAL GEMS is the newest original graphic novel from BOOM! Studios based on STEVEN UNIVERSE the animated series. When watching STEVEN UNIVERSE, created by Rebecca Sugar, we’re given a new kind of family. STEVEN UNIVERSE is the story of a half-human, half-alien boy who’s raised by three alien rebels, The Crystal Gems. Most episodes of the series are only 11 minutes long, so we only get to see Steven have one-on-one time with a Gem or two per episode. In this graphic novel Steven interacts fully with each Gem through this entirely fleshed out adventure. We have the rare opportunity to see how each Gem would handle parental situations on a mission in their own unique way.

The story begins with Steven introducing the Gems to camping. The Crystal Gems have been on Earth for thousands of years and they’ve witnessed humans build massive structures to escape the outdoors, so they can’t understand why anyone would willingly take a technological step backwards to spend the night in a simple tent. Nevertheless, The Gems will always give Steven’s ideas the benefit of the doubt. Over the past 14 years, the Crystal Gems have adapted to have maternal instincts, so they will always want to make Steven happy.

As they sit around the campfire Pearl takes the lead in storytelling as she entertains them with the tale of the Glass Ghost. Amethyst was young and mischievous when she joined the team centuries ago. She would often explore on her own, unbothered by possible dangers. To keep her safe Garnet and Pearl made up the story of the Glass Ghost. The ghost would shatter Gems who wandered off on their own.

READ: STEVEN UNIVERSE Tackles The Educational System in TOO COOL FOR SCHOOL!

Like many episodes of the series, the story goes from a mundane situation like camping to a full-fledged adventure. After telling stories Steven comes across shards of glass, this leads him to none other than a real life Glass Ghost. When Steven first encounters the Glass Ghost he screams in terror, and Pearl and Garnet spring into action to protect their Steven, just as they did for Amethyst years ago. Watching over a young Amethyst has some parallels between their eventual duties to protect Steven. They may never have had children to watch over, but the Crystal Gems have always watched out for one another.

These warriors are strong, smart, and self-identified, but they aren’t human. Garnet, Amethyst, and Pearl are just light projections with mass. They weren’t born but made, and they have little to no idea what it’s like to be human. Coming from a place where babies don’t exist, raising Steven has come with a bit of a learning curve. They’ve left their home world behind and have had to adapt to an entirely new way of life. They continue to learn for Steven’s sake. The Gems have put aside their own needs and comfort for Steven, a sign of excellent parenting. 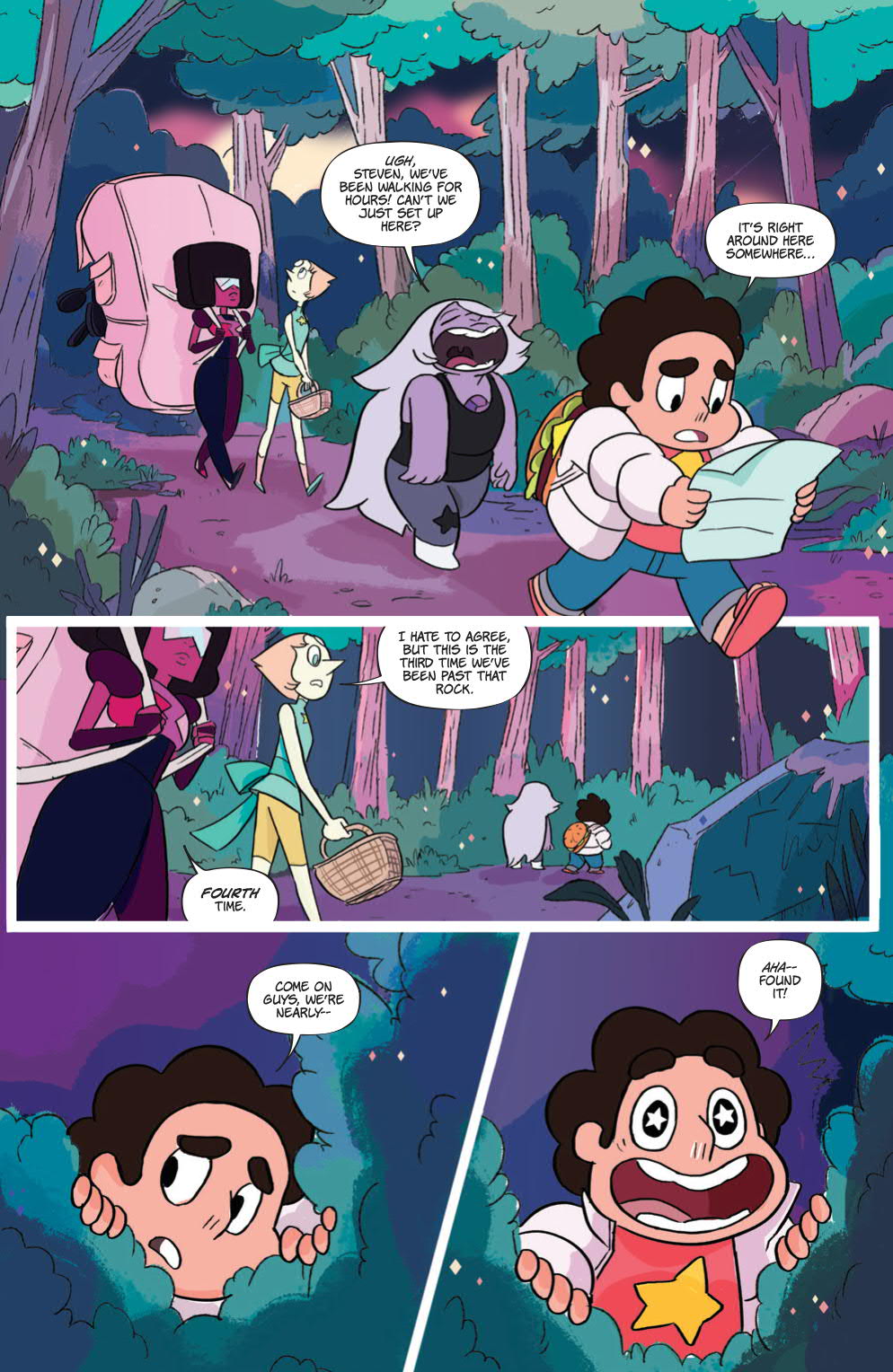 The Gems are rebels who followed their leader, Rose Quartz to Earth centuries ago. Rose is Steven’s mother who gave up her physical form to give birth to him. Greg, Steven’s father, felt it would be better if he lived with them. Greg is always nearby to give some fatherly advice to Steven, but they are the only ones on Earth who know what it’s like to be a Gem. Throughout STEVEN UNIVERSE AND THE CRYSTAL GEMS, the Gems continuously display ideal parenting skills. The Gems are able to give Steven what he needs due to how unique they all are.

Each of the Crystal Gems represents different ideas of a good parent. Pearl was created to be nothing but a decorative item on Homeworld. Since the day she joined the Crystal Gems Pearl’s worked hard to prove that she’s more than that. She has proven herself as an inventor, a mentor, and a fighter. By seeing Pearl overcome so much adversity in her life, Steven has gained the confidence to work harder. Pearl is also practical and overprotective of Steven. While searching for the ghost, Pearl points out Steven needs footwear other than sandals as not to cut himself, something any good Earth mom would say. 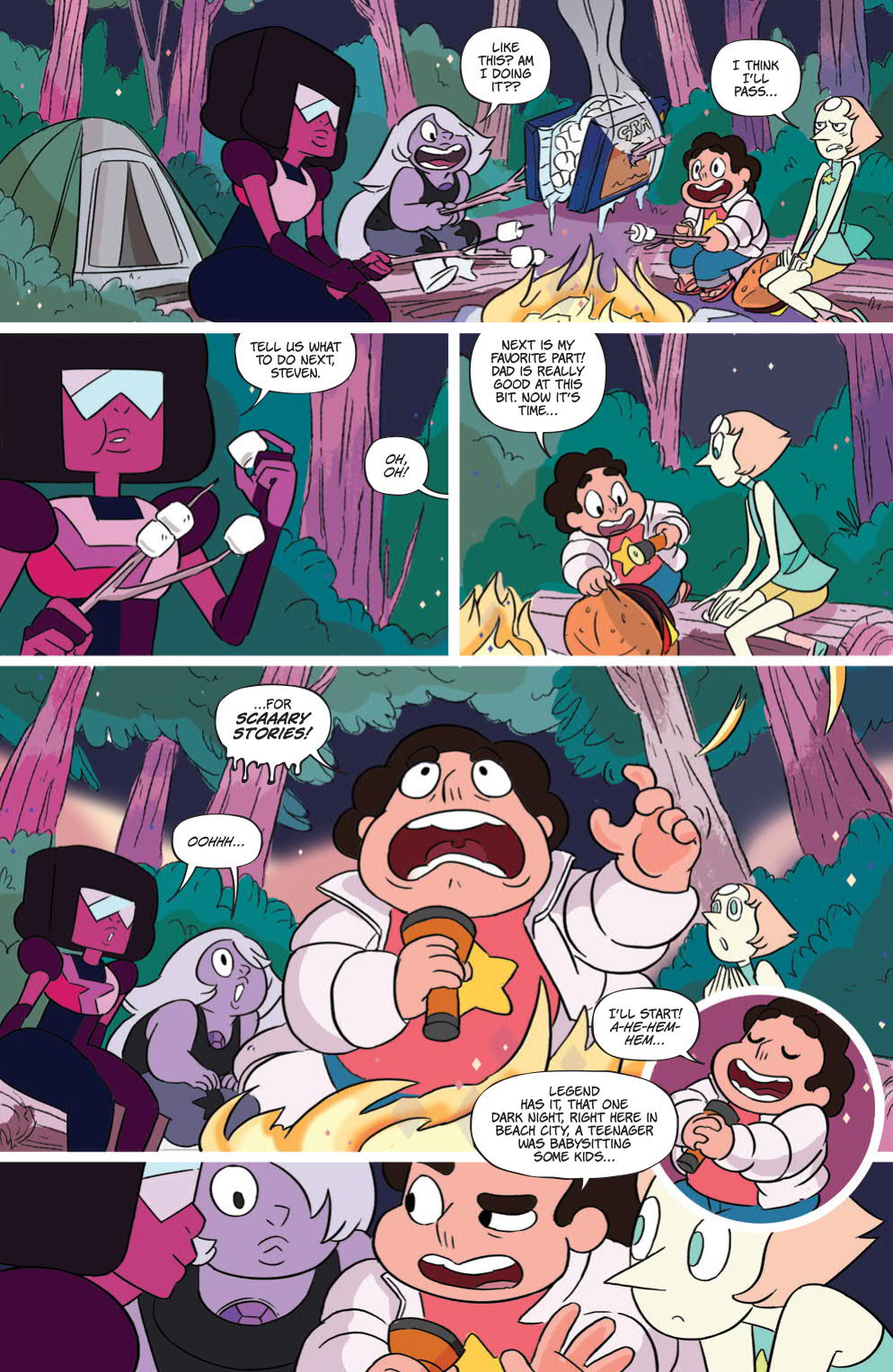 Amethyst has the most in common with Steven out of all the Gems. Steven and Amethyst were both born a little different. While Steven is a hybrid, Amethyst is a quartz who literally never grew to her full potential, so she won’t be as strong as a fully grown gem. Not being as strong as Garnet and Pearl has taken a toll on her self-worth. As the youngest, Steven and Amethyst are able to confide in each other about their respective shortcomings.

They know they will always have each others’ backs. Within the text, Amethyst is the only one that believes Steven when he tells them he saw the ghost. Since Amethyst used to be the youngest member she knows how hard it is just to get the others to hear you out. When raising a teen you need to be firm, but sometimes you need to be their friend and just listen.

READ: Want more SU Analyzation? Look at We Are The Crystal Gems: Choice and Autonomy in Steven Universe!

Garnet is strong and wise, her fused state representing a perfect emotional balance. Part of Garnet’s fusion is Sapphire, which gives her the ability to see multiple futures. Despite seeing all these possible outcomes, Garnet allows Steven to make his own choices. She trusts him to make the right decision. At a point during their adventure, the Gems are separated from Steven. Instead of rushing to save him, Garnet states “Steven can handle himself.” As scary as it sounds, there’s a point you have to let your kids make their own decisions.

This variety of different parenting styles has given Steven the tools to handle nearly any situation. He can face danger with a clear mind just like Pearl. He can enter the fray confidently like Amethyst. Instead of second guessing himself, Steven trusts his instincts like Garnet has in the past. All of these life lessons win the day in the end. While the rest of the Gems often run into a situation with swords drawn, he usually tries to find a peaceful solution. It’s the combination of learning from these amazing alien warriors and his inherited human side that has made him into the brave, funny, and empathetic character we all love.