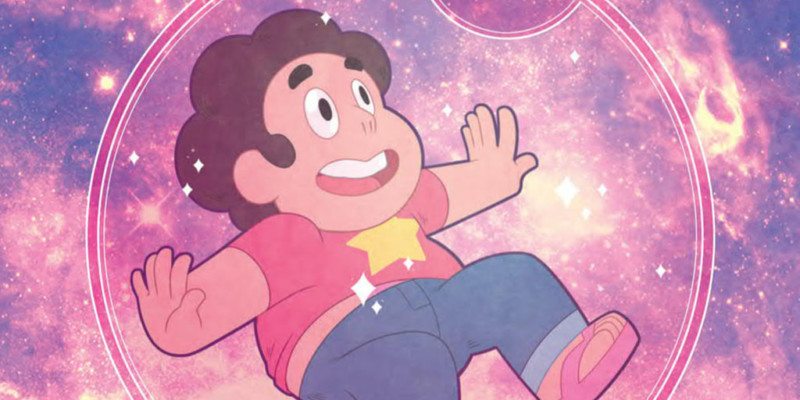 The start of February has held a number of important moments for STEVEN UNIVERSE. The LGBT media organization, GLAAD, nominated STEVEN UNIVERSE for Outstanding Comedy Series at its 28th Media Awards event. Plus, we just received a slew of new episodes focused on exploring the mysterious alien society Steven’s family comes from. Finally, Boom Studios, which previously released quite a few one-shot comics and limited series around the cartoon, recently began publishing an ongoing STEVEN UNIVERSE comic series. So get ready, because there will be new STEVEN UNIVERSE content every month from now on starting with STEVEN UNIVERSE #1!

Written by Melanie Gillman and illustrated by Katy Farina, the ongoing STEVEN UNIVERSE comic will run parallel with new episodes. Supplemental stories provide focus on characters rather than the main plot. We can certainly see this in the first issue. STEVEN UNIVERSE #1 may be a lighthearted filler story about rescuing a baby bird, but it centers heavily around Lapis Lazuli and Peridot as good guys living together in the barn – which is kind of a major spoiler for the series in and of itself. As such, I’d definitely recommend catching up with the cartoon before attempting to read STEVEN UNIVERSE #1.

That being said, STEVEN UNIVERSE #1 is a lot of fun. It matches the tone of the cartoon exactly. The humor is excellent. There’s also a lot of fascinating gender stuff going on. 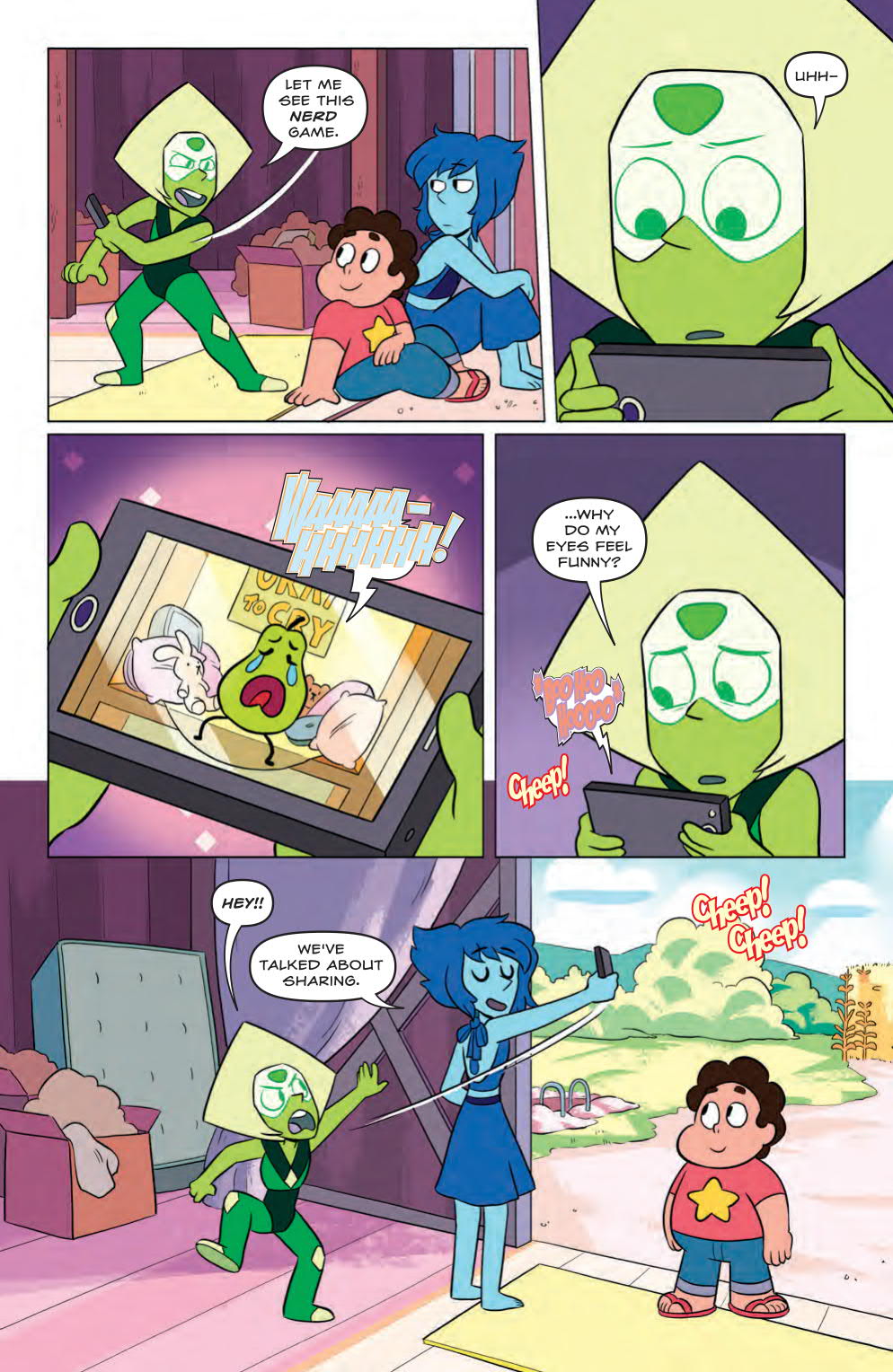 STEVEN UNIVERSE #1 begins with Steven visiting Lapis and Peridot in order to show them a new app based on his favorite cartoon: Crying Breakfast Friends. He excitedly tells Lapis, “Everybody needs a comfy spot to cry” and shows an image of a pear (resembling Peridot, get it??) sitting near a sign that reads “Okay To Cry.”

What’s hilarious here is that Crying Breakfast Friends has always served as a parallel to STEVEN UNIVERSE itself. Some viewers of both cartoons constantly complain the characters are too emotional. Fans, such as Steven, believe that crying to be healing. Through the spin-off app in the first scene, this spin-off comic tells readers our hero is a boy who cries. Here, sensitivity and femininity will be signs of strength rather than weakness.

READ: This isn’t the first time STEVEN UNIVERSE dealt with emotions! Read our analysis of the episode “Mindful Education!”

Three characters encounter a baby bird stranded outside of its nest, interrupting Steven’s explanation of the app. A worker at an animal shelter recommends that they just leave the bird and wait for the mother to find it. Steven stays up late into the night worrying about the baby bird and, as he gives up, says to Lapis that maybe part of being a mom is “making tough decisions.” This is highly reminiscent of Steven’s feelings of abandonment regarding his own biological mother, who sacrificed her life to bring Steven into the world.

As Steven sleeps, Lapis decides to take in the baby bird and raise it communally with Peridot and Steven, much in the way that Garnet, Amethyst, and Pearl did with Steven. The three eagerly embrace different maternal roles, throwing societal ideals about motherhood out the window. After all, the female characters didn’t instinctively take to the bird; it was Steven who got them into the idea of being mothers. Plus, Steven is a male mom focused on making the bird (named “Susan”) feel safe. Meanwhile, Peridot is masculine in her duties to Susan. She fails miserably at training her baby to become an attack eagle. The three even decide not to gender the bird. They refer to Susan with they/them pronouns even after the typical girl versus boy name argument. 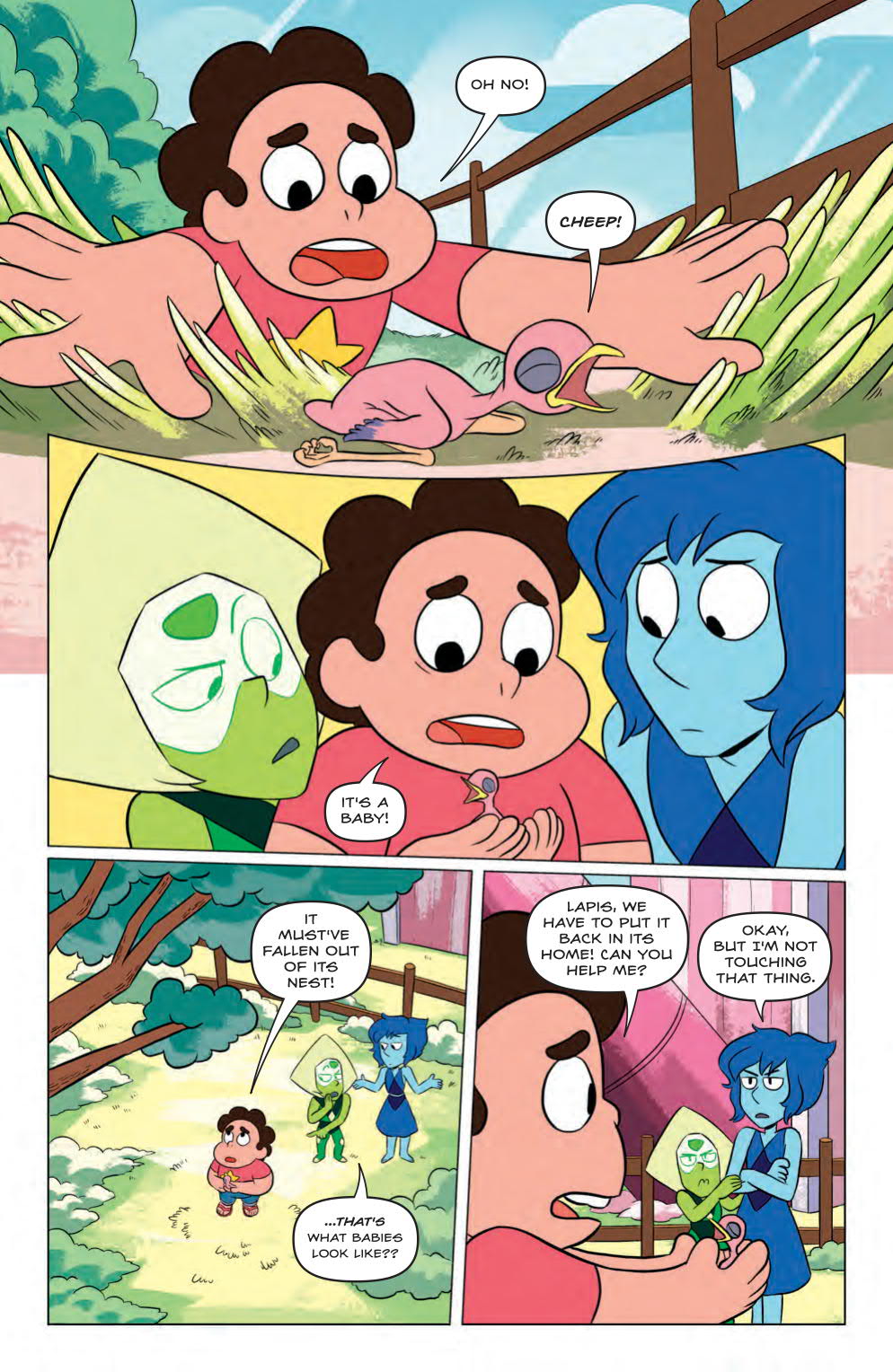 Not to mention, the artwork fits right in with the style of the TV series. It has all the soft pastels and the occasional anime sparkles that we’re used to. Steven and Peridot have some absolutely hilarious facial expressions that work well with the humor of the writing. The characters all appear to be on-model. The exception of Lapis’s dress not quite as satisfyingly swishy as it is in the cartoon notwithstanding. For the most part, the artwork feels true to canon.

The Bottom Line on STEVEN UNIVERSE #1

STEVEN UNIVERSE #1 is an excellent comic for kids and adults alike. It is entertaining, funny, and colorful while spreading positive feminist messages. The major characters reclaim the usually sexist roles of the caring mother, the hysterical femme, and the princess in a feminist light. Care, emotion, and a connection is not inherently bad. They can be extremely fulfilling parts of the human experience – just as long as they are chosen rather than restrictive punishments.

It’s excellent to find a message like this in a gender-neutral children’s series. Imagine how many kids stop feeling weak for opening up about their emotions or for loving things society deems “too girly” just by reading this comic?

I, for one, cannot contain my excitement! I can’t wait to see where the STEVEN UNIVERSE comics take our crying breakfast friends next.