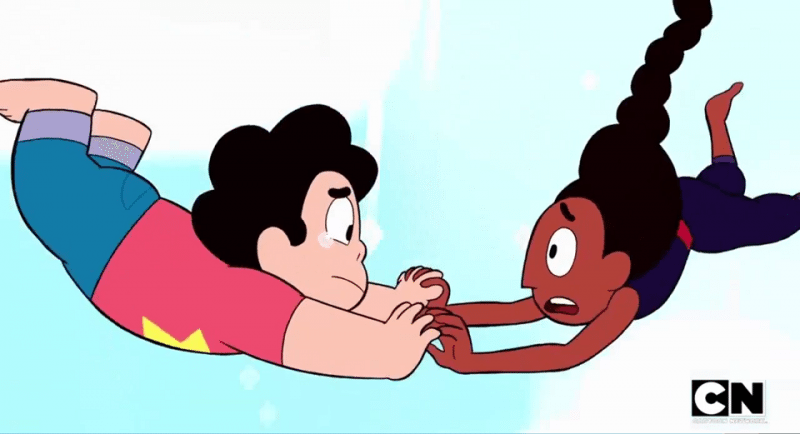 Morally ambiguous characters are the backbone of Cartoon Network’s STEVEN UNIVERSE. Sure, we want to raise kids to become good people, but presenting people as either good or bad inhibits that goal. If children grow up thinking that all good people do good things, and all bad people only do bad things, they might either a) excuse their own bad behavior since they’re a “good” person or b) completely disregard someone who did one “bad” thing.

Western culture is full of this dichotomy. Disney is the ever-popular example: Most Disney villains are clearly bad people, and often get their just desserts (death). Unfortunately, life is rarely that simple. “Goodness” and “badness” can become pretty ambiguous in reality. We might perceive those who make us feel sad as “bad people” even though those same people can make others feel secure and happy. By having a broader perspective on humanity, we can reflect on ourselves and find room for improvement. To explore this concept, let’s delve into the core of STEVEN UNIVERSE and see just how its flawed characters can help watchers grow!

LOOK: Want to read more about problematic themes in media? Check out this article on abusive relationships

Recently, Cartoon Network aired “Mindful Education”: a STEVEN UNIVERSE episode focusing on the fusion Stevonnie. Stevonnie is a fusion of Steven and his best friend Connie. They have a mix of both kids’ personalities, skills, and anxieties. During one of their sword-fighting lessons with Pearl, one of Steven’s gem guardians, Stevonnie begins to have hallucinations and breaks apart back into Steven and Connie. Garnet, the resident fusion expert, steps in and advises them on how to work through their anxieties together. Through Garnet’s advice, both Connie and Steven are able to come to terms with their past wrongdoings. While this episode is a great lesson in coping methods, this article will focus on its character building aspect specifically for Connie and Steven.

Prior to the events in MINDFUL EDUCATION, Connie broke one of her classmate’s arms. She is horrified at herself, not only because she instinctively attacked someone who accidentally bumped into her, but also because she literally ran away from the situation. When she brings this up to Steven, he advises her to not think about it, betraying his own coping methods. It’s pretty easy to say what Connie should have done in her situation. She should have immediately apologized, and then taken the student to the nurse. Although that much is obvious, her head was probably flooded with one thought: “How could I do that?”.

Connie is an intelligent, talented girl, not to mention an incredibly supportive friend. She’s not some thug who beats up kids for fun, showing off her physical prowess. Still, she hurt someone and ran away. Perfectly “good” people can do “bad” things. Furthermore, people who do “bad” things can own up to the fact that they hurt someone without being categorized as a “bad person”. Mistakes are inevitable, and people might not always make the right moral choice. The issues Steven face drive this point home even harder.

After Connie clears up her issue with her classmate, it’s Steven’s turn for a life-changing hallucination! Up until this point, Steven tried not to think about the less than ideal choices he has had to make, specifically the residual damage he dealt with from his mother’s actions during the Rebellion against Homeworld.  First, Stevonnie hallucinates Steven’s encounter with Bismuth, a former Crystal Gem he and his mother were forced to bubble away at different points in time (the equivalent of trapping someone in a coma). During the Gem War, Bismuth created a weapon that would instantly kill the Homeworld gems. Steven’s mother, Rose Quartz, didn’t agree with this, and bubbled Bismuth, then didn’t tell anyone about it. Steven is also hard-pressed against Bismuth’s methods. When Steven bubbles Bismuth, he promises to explain to the Crystal gems what happened. Bismuth laughs at this, and half bitterly says that Steven “really [is] better than [Rose]”.

This situation brings up the gray morality of war. Bismuth asks why both Rose and Steven value their enemies’ lives so much when those enemies won’t hesitate to kill everything they love. Still, Steven, in his gut, doesn’t believe anyone, even their enemies, should be brutalized in any way. One side can probably be argued more heavily for, but even then, the audience has to question both Steven and Rose for forcibly silencing Bismuth. Even if Steven explains the whole situation to the Crystal Gems, he still follows closely in his mother’s footsteps. Bismuth is never allowed to make her case to anyone besides Steven and Rose, which makes it easier for both Steven and Rose to sway the argument in their favor.

Next, Stevonnie sees Jasper, a Homeworld gem who has repeatedly attacked Steven and the Crystal Gems. On Earth, Jasper has slowly become obsessed with fusion, since she has been defeated several times by fusions. She is frustrated to the point where she fuses with a corrupted gem to try and beat Smoky Quartz (a fusion of Steven and Amethyst). Quickly, Jasper’s fusion destabilizes, and she shows signs of corruption herself. Steven tries to heal her, but she refuses.

Jasper, misunderstanding how human reproduction works, believes Steven is Rose Quartz, since he has her gemstone. She then unleashes a desperate critique against her that really can’t be refuted.  She points out that Rose always finds gems at their lowest point, with nothing else to lose, effectively manipulating them onto her side. Looking at how Peridot, a former Homeworld gem, allies herself with the Crystal Gems, Jasper has a point. Peridot’s redemption arc largely consists of her losing any semblance of control or power over her life. She knows the Earth’s life is at stake, and therefore hers. Between death and defecting, it’s usually an easy choice. Once Steven realizes that this is the reality of what he and the Crystal Gems are offering, he can’t help but agonize over it.

READ: Enjoying this article? Check out this other STEVEN UNIVERSE article by Alex Ashley!

Stevonnie’s final hallucination is of “Eyeball”, a Homeworld Ruby that Steven ended up throwing into space. During a mission on the moon, both Steven and Eyeball get flung out into space, with only Steven’s bubble-shield protecting them from the asteroid belt. Once Eyeball finds out that Steven has Rose Quartz’ gem, she takes out a chisel and tries to kill him. Faced with possible death, Steven hurls Eyeball into the void of space to float for eternity (or until someone picks her up). While Steven clearly acted in self-defense, he is a pacifist at heart. Possibly condemning a sentient being to a lifetime in space with no guarantee of rescue just might weigh a little bit on a person’s conscious (someone, please hire a child psychologist for Steven).

Let’s bring this back to the real world…

While Steven and the Crystal Gems are considered “the good guys,” their actions are still questionable. Steven struggles with his choices and feels bad for them. During Stevonnie’s hallucinations,  excuses like “you wouldn’t listen” and “I had no choice” are used to justify Steven’s previous actions. He is realizing that his and the gems’ actions are not always going to be clearly “the right thing.” That’s the reality of life: many of us will be in situations where we might have to justify our actions, not only to others but to ourselves. STEVEN UNIVERSE does a great job of showcasing this reality and showing how to deal with that realization. Like Connie says, we have to be okay with how bad it feels and recognize how bad we feel. Then, we can figure out what to do in order to rectify the situation, if anything at all.