As a nonbinary person, I get super excited whenever I see Peridot on STEVEN UNIVERSE. Peridot is a small green alien who starts out as a villain but ends up joining the protagonists after a huge character arc. She also presents as incredibly androgynous, whether a bad guy or a good guy. With short hair, a low voice, and a tendency towards bowties and boxers, Peridot doesn’t really fit in with feminine ideals at all. Which is super refreshing, compared to the usual stock characters cartoons love to churn out. So when I saw that STEVEN UNIVERSE #4, the latest issue of Boom! Studios’ ongoing comic, would have Peridot as the star, I was pumped.

STEVEN UNIVERSE #4 is written by Melanie Gillman and illustrated by Katy Farina. Like all issues before it, this comic mostly focuses on character interactions rather than grand story arcs. But that doesn’t mean it’s not a lot of fun. In STEVEN UNIVERSE #4, we follow Steven, Amethyst, and Peridot as they explore a renaissance fair. And of course, shenanigans abound. 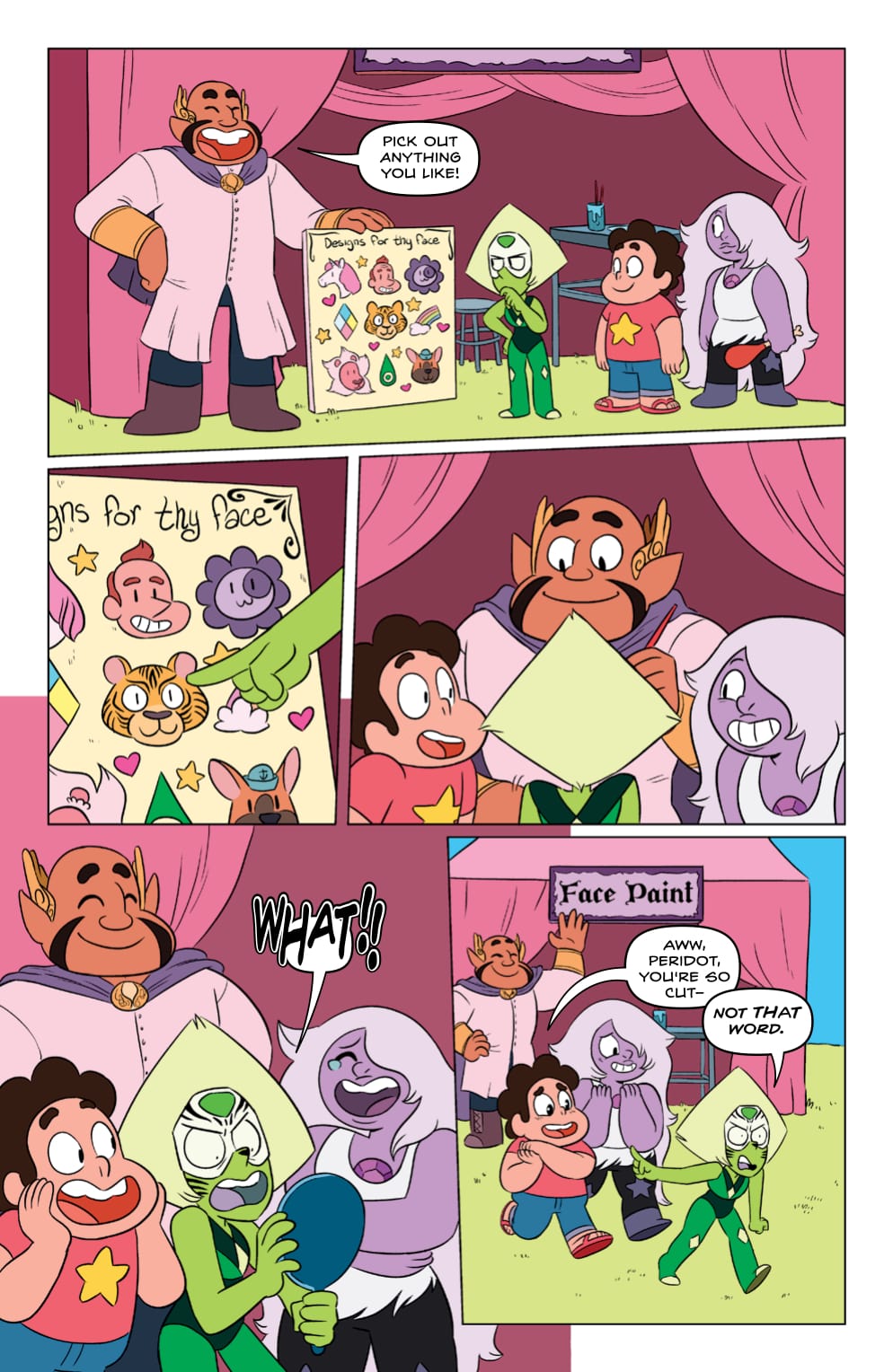 It’s Peridot’s first time at a ren fair, and, like most Earth things, she doesn’t really get it. The celebration of primitive tech seems reductive to her. And the face painting station didn’t actually turn her into a tiger. Flaming femme Steven tries to tell Peridot that there is charm in these things while trying on some fairy wings for himself. Still, Peridot isn’t having any of it.

It’s only when she sees the weapons and the jousting matches that she starts getting into things. But, to her dismay, she keeps getting pushed away from these “dangerous” activities and sent off to the cutesy stuff. For instance, an employee rips the broadsword Peridot admires out of her hands and gives her a rainbow toy sword instead. Plus, throughout the entire day, strangers call Peridot “little lady,” “sweetie,” “kid,” and (her least favorite) “cute.” They bend down and patronizingly smile to talk to her.

READ: How does LADYCASTLE flip medieval fantasy gender roles on their head?

This builds up to a point where Peridot challenges the lead jouster to a match. But when he stages his own defeat as a way to humor her, she furiously plots her revenge. Can Steven and Amethyst keep Peridot from getting kicked out of the renaissance fair? (The answer is no.)

Personally, I found this story to be both entertaining and painfully relatable. In many ways, Peridot’s struggle to retain agency against the images society projects onto her resembles what happens to trans and nonbinary people every day. When your gender doesn’t fit societal expectations about your body, every social outing is like a battle strategy game. Do I engage with the barista who called me a lady? Or do I save my energy for holding my confidence against the strangers staring at me while I peruse the men’s section at Kohl’s? How many times can I correct my parents when the call me a “she” before they start lamenting how hard this is for them?

So I completely get Peridot’s anger towards that jouster. He doesn’t know the first thing about her, yet he’s suddenly deciding what she can and cannot handle. And it has already been a long, long day. 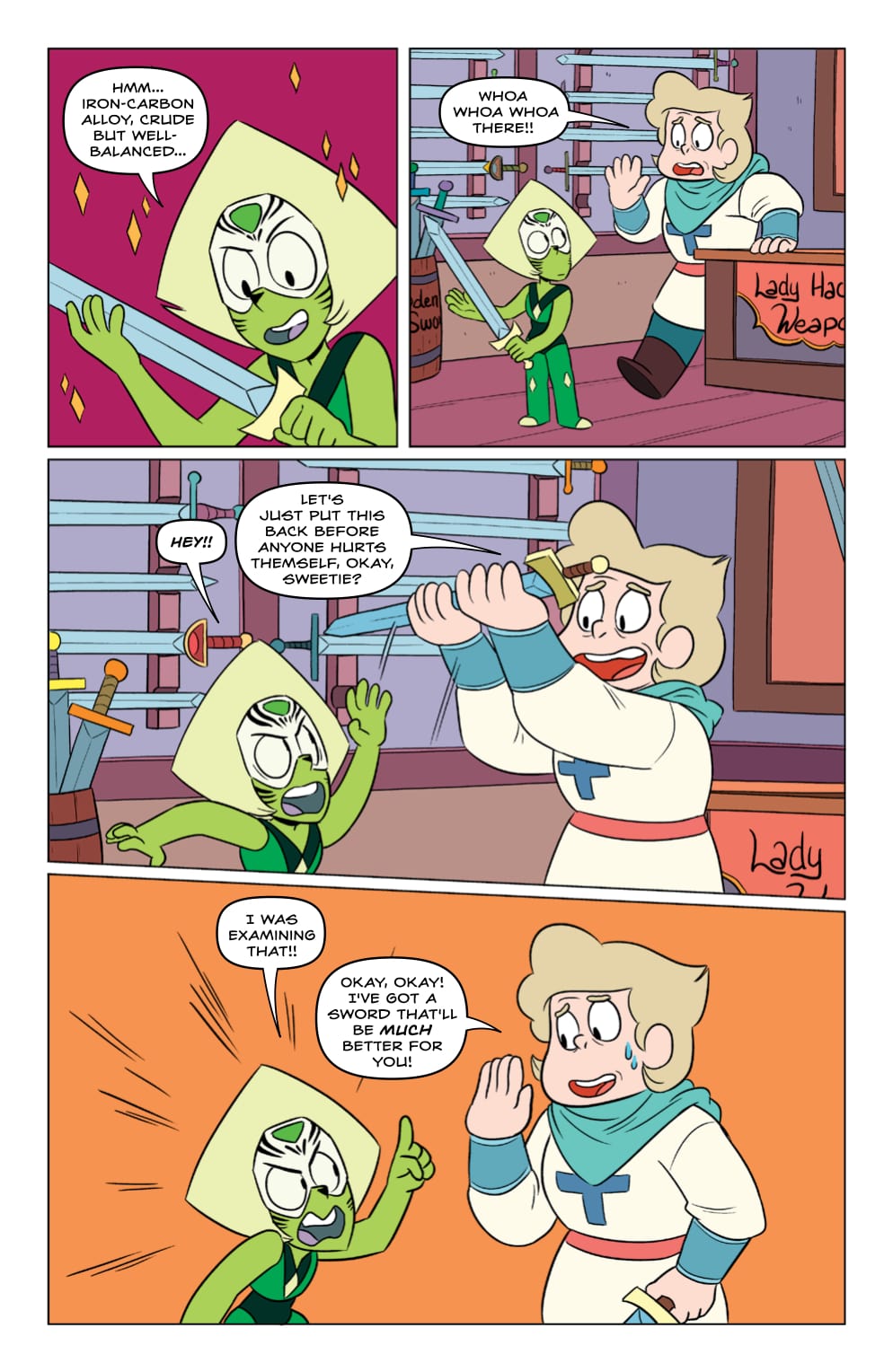 That being said, I found a few things off here. STEVEN UNIVERSE #4 keeps pacing back and forth on what type of society it is that Peridot is engaging with here. On the one hand, Peridot deals with incessant feminization from ren fair employees. On the other hand, the announcer at the jousting event sends greetings to “Lords, ladies, and gentle-enbies” (enby is a nickname for nonbinary or nb). The shopkeeper who removes Peridot’s sword is a butch woman who later dons knight’s armor. And Steven tries on his fairy wings without incident. Is this renaissance fair a place that accepts variant gender expressions, or isn’t it?

One could argue that the workers are projecting youth onto Peridot moreso than femininity. However, the consistency with which others misunderstand Peridot’s desire for traditionally masculine items such as swords and tiger faces says otherwise. Not to mention the fact that Steven, an actual child, and Amethyst, a short femme, have none of the same problems as Peridot in this issue.

I wish the comic was a bit more consistent with this theme. If the creators want the fair to be a place that embraces gender variance, they should commit a bit more to it than a one-word acknowledgment. If they want this town to feel oppressive, then make it oppressive. And if they want something in between, make sure there are places in the town that feel more oppressive and communities that feel safer. Don’t just throw everything together and expect it to make sense.

Those Background Characters Tho 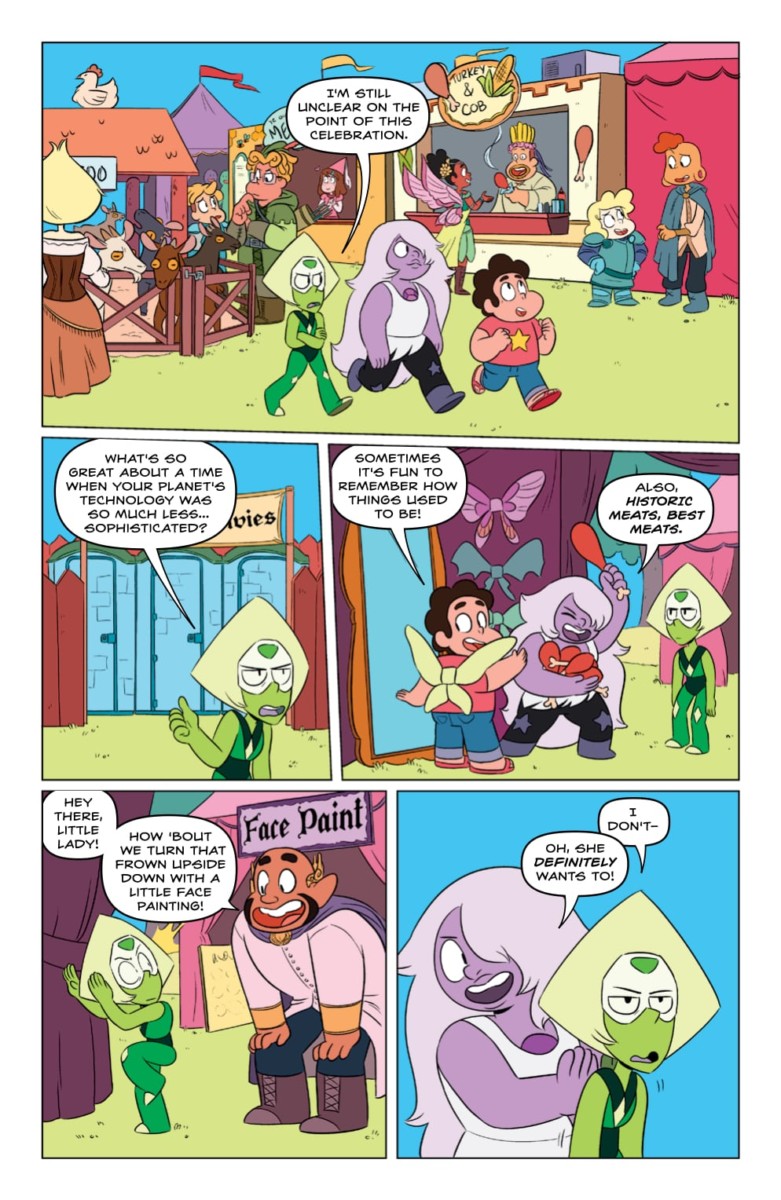 That being said, Peridot’s characterization is absolutely spot-on. She is 100% her usual hilarious self. The comic is a great excuse just to watch Peridot flail around with swords and go on flustered rants about how confusing Earth is. Steven and Amethyst are in character as well. They serve as an excellent foil to Peridot, highlighting that the feminine things Peridot rejects are still enjoyable. It just blows when those things are forced onto you. Plus, STEVEN UNIVERSE #4 gives a lot of fun cameos to side characters from the cartoon. Jaime gets to be over-the-top while announcing events, and Onion causes havoc in the background.

Katy Farina’s art is enjoyable too. She seems to have had a lot of fun with background characters in this issue. Farina could’ve just gone with generic medieval figures, but instead she chose to figure out exactly how all the side characters would dress and act in such an environment. If you look closely, you can spot all kinds of fun stuff. Highlights include Kiki Pizza’s elaborate fairy princess cosplay, as well as the Yuri On Ice cameo. Of course, Peridot looks great in this issue too. She’s really rocking that tiger face paint. And when she puts on a knight costume and rides a chubby pony for the jousting match, I may have squealed a little. All in all, the artwork is very entertaining and provides a lot of additional material to the text.

STEVEN UNIVERSE #4 is a whole lot of fun. It takes the already enjoyable scenario of characters at a renaissance fair and packs in a whole lot more. Plus, it’s a good way to explain the feeling of being misgendered to people who might not experience it firsthand. The way the comic handles it might be a bit confusing at points, but it definitely conveys the uncomfortable awkwardness and unrelenting nature of the experience. In this way, STEVEN UNIVERSE #4 can have lasting value for young and adult readers alike.