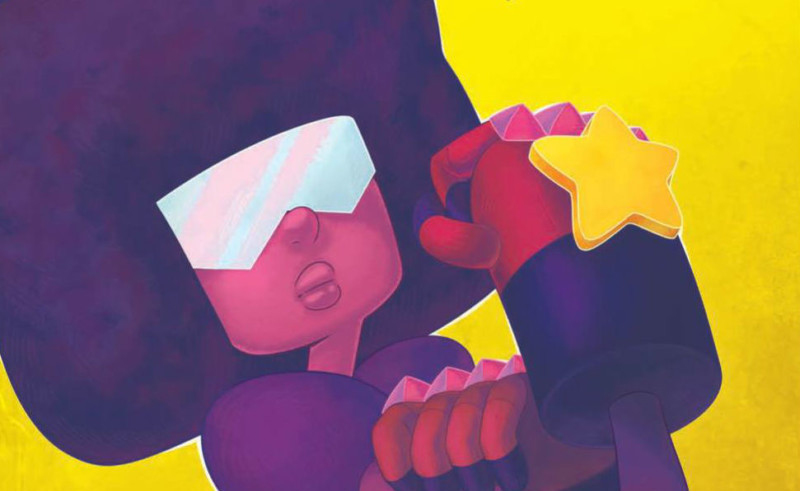 Alright full disclosure, for a good part of my life I’ve lived in Rehoboth Beach. It’s a small beach town in Delaware and, from my understanding, a huge influence on the setting of STEVEN UNIVERSE. So whenever there’s a story that puts a spotlight on Beach City, I have to admit I get beyond excited for it. That’s exactly what happens in STEVEN UNIVERSE #3, written by Melanie Gilman and illustrated by Katy Farina.

READ: Need an analysis of the morality of the show? Check it out here!

Our story begins when Mayor Dewey enters Fish Stew Pizza. He finds his son, Buck, working on a zine with Steven about the various seagulls in the town. Which, speaking from personal experience, would actually be a very useful pamphlet to have. Some of those birds are vicious, and if you want to keep your fries you need to know which ones to avoid. Dewey orders a pizza from Nanefua, the old lady who runs the store, and asks her how business is going.

When the mayor learns that the pizza place is having an off-season, he asks how they could get more business in the city. His son excitedly suggests they invite food carts to draw in people from outside of town, but that proves to hurt the local businesses. So the next day, the mayor uses the proceeds to host a celebration for the citizens of Beach City, showing that their community is worth more than the bottom dollar. 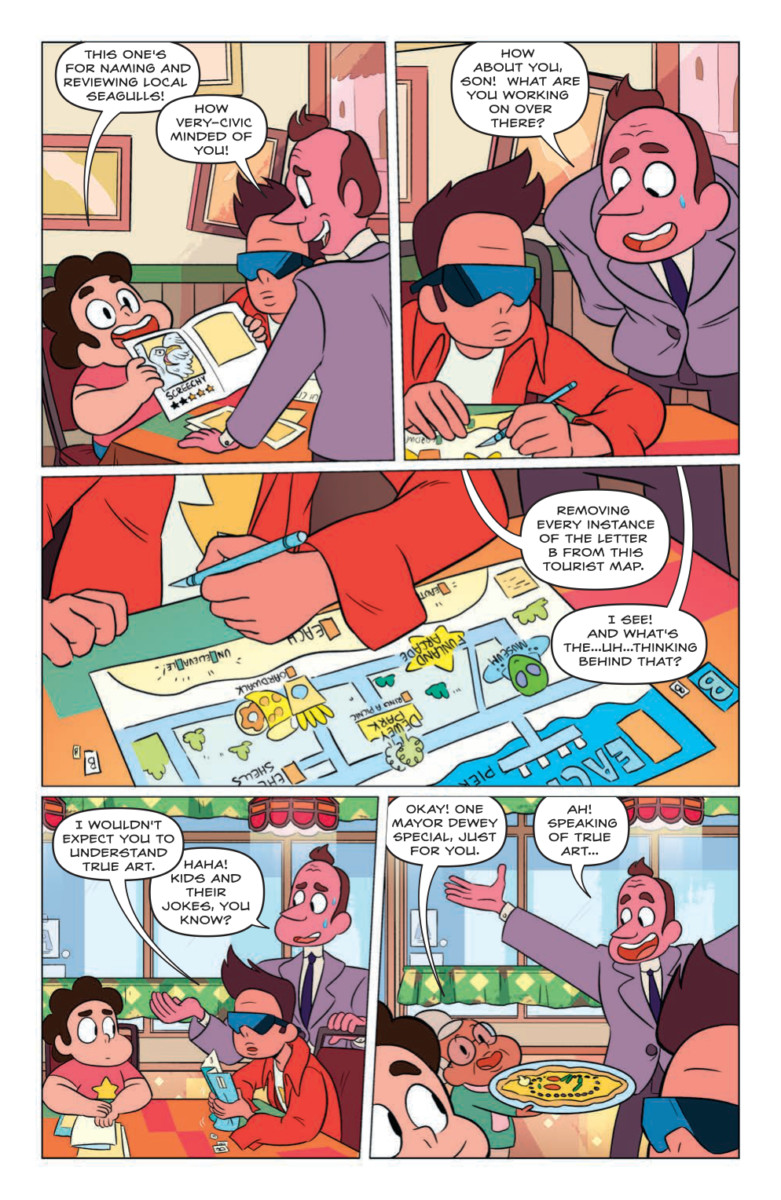 The art keeps to the standard models of the show. Colorful backgrounds with cartoonish characters give the entire issue a lively feel. Some of the panels have a very simple gradient or solid fills that help give the comic movement. It really reads like a stationary cartoon episode, which I believe was the intended result. Sometimes the panels appear flatter than intended, but those are few and far between.

READ: Haven’t read the first issue of STEVEN UNIVERSE yet? Read our review of it here!

What really shines through with the art are the expressions on the characters. Even the littlest sweat droplet helps indicate so much about what a person might be thinking. It’s quite fun to just look at and let the images tell the story. It definitely skews to a younger audience, but that doesn’t mean it isn’t fun to read as an adult. Personally, I really enjoyed the childish simplicity of it. The overall style made me think of something that was riding more on emotion than actual plot logic, which given the show’s history was probably the artist’s intent.

I have to admit, seeing Dewey come up with hair-brained schemes to try and get business during the off season was very endearing to me. So much of the town’s income comes from just 3 months out of the year that, of course, he would want to try and gain more revenue during the off-season. This remains a staple of every tourist-based town I’ve ever lived in. A lot of talk surrounds anticipation for the upcoming season: whether or not some businesses will remain open in the winter, and what people will do to draw customers in. 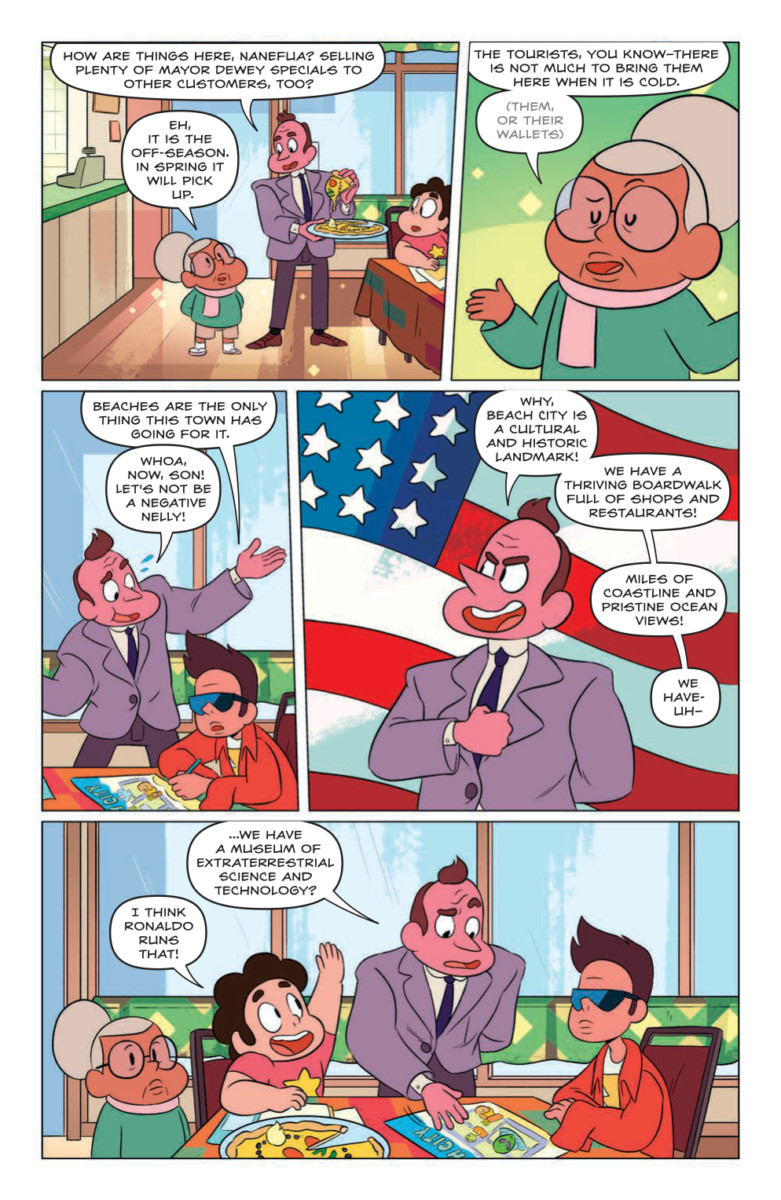 As always, I love the community of Beach City. To me, it truly captures what makes a beach town so endearing. When the plan failed to draw business from outside the city, it made my heart soar to see them all get together for a picnic. Because, strangely enough, you really do rely on the other locals for support. Last summer a renowned member of the community was diagnosed with terminal breast cancer. She had been a staple of the town for years. No matter what, she always rode around on her bike selling raffle tickets at all the local restaurants. She always wore the biggest smile and loved making people laugh.

When she could no longer go out as much as she used to, the town threw her a parade as one last hurrah. People made signs and stood on the street corners all shouting how much they loved her. They had her ride in this beautiful convertible with a complete entourage of fire and police trucks. It truly expressed that while she may not always be around physically, she’d always have a place in our hearts. This is what small town communities will do for one another. It’s corny as anything, but it’s also really sweet.