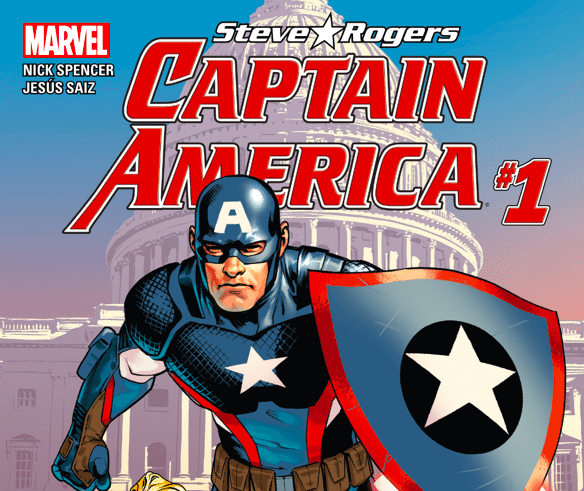 Steve Rogers is back and wielding a (although not THE) shield. Writer Nick Spencer and artist Jesus Saiz deliver what should be a triumphant return, but ends up being an uninspired, ugly, and all around aggravating mess that does a disservice to the star-spangled Avenger.

READ our review of the latest Marvel film, X-MEN: APOCALYPSE!

The issue starts off with Steve on the quest to stop a hijacked train from exploding and killing tons of people. He’s got Sharon Carter, Rick Jones, Jack Flag and Free Spirit on his side. While simultaneously flashing back to life with his abusive father and loving mother, the issue charts the current rise of HYDRA and, in the end, reveals that Steve has been an agent all along. 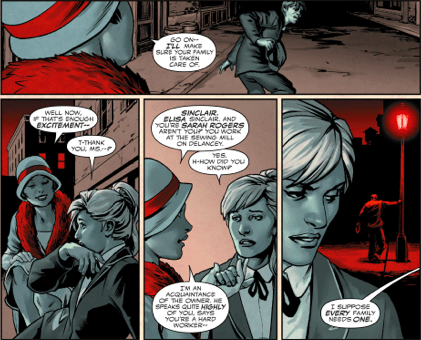 The issue starts off with a ton of potential. Steve has a fun team alongside him, even if the current predicament feels like it’s a bit cookie-cutter. How often do we see a team of SHIELD agents taking down a runaway train? It’s pretty typical of a Captain America book to do so, and this one doesn’t really do anything to make it feel fresh. The issue then suffers from a heck of a lot of slog. In classic Marvel fashion, it’s oversized and under-stuffed, presumably to fit the 4.99 price tag. The issue felt like another typical Captain America adventure. There was someone threatening the public, a daring rescue by Steve, and a lesson to be learned. It was a tad boring, aside from some surprisingly comical villains. The one fascinating thing this book does is also one it tragically overlooks. The current state of HYDRA seems perfectly reasonable set in our current world. A bunch of white supremacists are tired of the overly PC culture and want to do something about it. This was a clever way to make HYDRA, one of Marvel’s most overly-used villains, relevant again. By targeting the unemployed and close-minded crowded, they genuinely feel like a threat one would find today. However, the issue doesn’t spend nearly enough time exploring them or, why, of all people, Red Skull is traveling around to basements and hyping up a bunch of ex-convicts. It seems slightly out of character for him.

READ an in-depth look at superheroes and elements of grief found in their origins.

Then, of course, there is the dramatic twist in the end of the book. When Steve declares himself an enemy by throwing Jack Flag from the plane and saying “Hail Hydra,” the book nose-dives into mass-marketing mediocrity. Surely Captain America, the sentinel of liberty, isn’t a HYDRA agent. Surely his mother didn’t raise him to be an enemy of the country. Surely, there are already dozens of headlines flooding the internet about how Captain America is now an enemy. Maybe Marvel is out of ways to tell new and compelling stories without upending years of mythology (see INTERNATIONAL IRON MAN for more of that!). While it may end up being an entirely well-thought out and incredible arc for all we know, there is no way around the fact that it feels like a gimmick, inspired by an attempt to steal the spotlight from the Distinguished Competition. It will, more than likely, be resolved and undone within a matter of issues. However, while reading it, it almost feels gross. Imagine if your dad said he was actually somebody else’s dad and not your dad, and that your real dad doesn’t exist. It would be like someone saying every ideal and goal you’ve ever striven for is now meaningless. 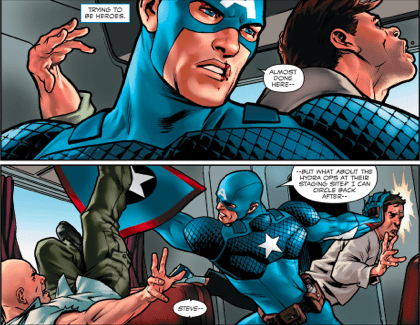 The issue isn’t aided by its artwork. While the flashback sequences may have appealing colors and feel like they suit the era, the majority of the issue is somewhere between airbrush imitation and classic Archie in feel. It doesn’t fit the grim tone that HYDRA brings and does little to support the dark themes presented in its central antagonist, a potentially sympathetic suicide bomber. Sadly, it can’t make the issue any more interesting and fails to grab the eye beyond a quick glance.

In the end, the book feels cheap. It’s a safe bet that a lot of readers are going to feel this way, especially from a company that hasn’t exactly been trustworthy with their prices and gimmicks of late (see CIVIL WAR II for more of that!). It’s long, predictable, and worthy of more than a few rolls of the eyes. Captain America, arguably the most noble hero this side of the aisle for 7o years, has earned something better than this.