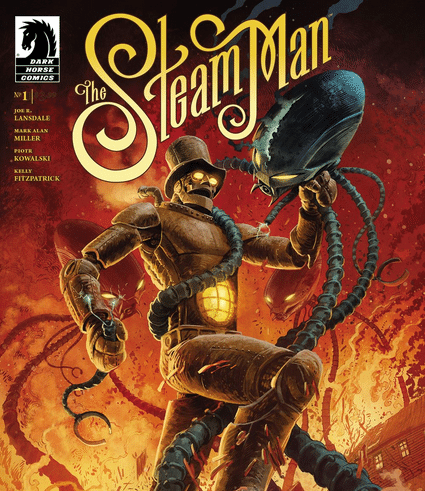 THE STEAM MAN #1 is an eclectic mix of sci-fi and horror, when four men team up in a giant steam powered robot to fight aliens and vampires!

It’s 1899. The Old West. As we know from history, it was a time of giant steam powered robots, alien invasion, tears in the fabric of space, and vampires roaming the land… Wait. What?

Taking inspiration from stories of the era, Joe R. Landsdale wrote a short story based on the concept of a giant steam powered man. Here, Landsdale takes this story and expands it out into a action packed mini series.

The front cover, by the artist Piotr Kowalski really sums up what this is all about. A giant top-hat-wearing man of iron punching an alien square in its face. However, this is as bombastic as the art gets. The artist does something very interesting and wonderful within the book, and must have trusted the writers thoroughly to execute it well. There are no splash pages within the book.

There is a lot of action, but the storytelling is compact, the action done in a few panels, even the alien invasion is shown in one panel about a quarter the size of the page. It’s really a surprise to read as it doesn’t follow the usual rules of trying to grab you with huge battle scenes. It trusts in the story, and the story is told really, really well.

Everything you need to know, done in one page.

Landsdale and Miller co-wrote this story, and what comes across is how focussed the story is. This is no slow burn. We are thrust into an alien invasion and aftermath within the first few pages, then the threat of the Dark Rider is introduced. All done at a natural but swift pace that gives the reader enough to get on board very quickly. Its roots are in the sci-fi and horror of old, with the influence of H.G. Wells and a smattering of Bram Stoker dripping from its sleeves. The horror is bloody without being graphic. The monster of the piece is shown in close ups and shadow. This is a boogey man for adults that must be destroyed, and the Steam Man team is the only thing that can stop him.

READ: Like your horror? Check out Kay’s review of CLEAN ROOM

Leading the charge is William Beadle, inventor, and he has very good reasons for tracking down this Dark Rider. He is accompanied by three others, and while they haven’t been too fleshed out, I feel that they will become more intrical as the series progresses. The exception is John Feather, Native American, who gets a really cool moment to shine, and seems to be the light relief of the group. 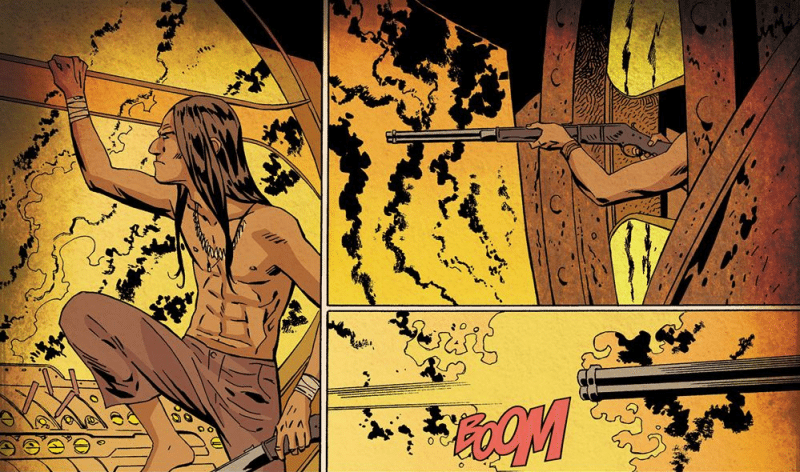 John Feather has a plan. Simple but fun.

Early on in the issue, Beadle hints that they may be heading to their deaths, and given the light tone of the narrative it doesn’t hold any weight, until the Steam Man breaks down and you can feel how vulnerable they are. The issue seeps in as you read and by the end you buy into the threat lock, stock and barrel.

It would be easy to ride the coat tails of popular culture as everything from that pulp era is mined, but ‘The Steam Man’ #1 does enough to make it its own beast. I expect this to be a great mini series which will read slightly better in trade. Maybe because I’m impatient to see how it unfolds. A good solid issue, with a hint of great storytelling to come.

Enjoyed this review? Find out more about CHRIS here!