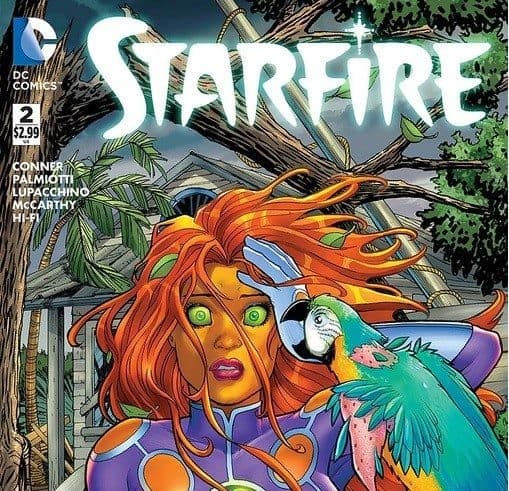 Just as Princess Koriand’r gets aquatinted with her new Florida home, Mother Nature gives her a hell of housewarming gift in STARFIRE #2!

# 2 kicks off right where the first left off, with Kori’s Florida island home being blasted by Hurricane Betty. After rescuing her new landlord and her grandson, Starfire travels through the town rescuing numerous other residents. She eventually runs into Stella Gomez, the island’s sheriff and Kori’s friend; Stella recruits Kori to help find her brother Sol who disappeared at sea while attempting to retrieve a stranded honeymoon couple. Starfire braves the hurricane to rescue the couple and eventually Sol, though she’s unable to navigate the two back immediately and they end up stranded on another island. The two bond before Stella and Sol’s Coast Guard allies arrive to rescue them, setting up a seemingly happy ending. However a mid-book interlude establishes a surprising new antagonist, and Kori discovers evidence of this new enemy as the book ends…

The second issue of STARFIRE unsurprisingly follows the same format as the rest of Conner and Palmiotti’s current DC books (including the first issue of this series) and it works. The multiple vignette format blends seamlessly with the plot of Kory rescuing various townspeople, and allows the writers to blend in their trademark humor with a series of, shall we say interesting residents. Overall, the choice to revolve the series’ second issue around a hurricane instead of any type of super villain is an interesting one, especially when the first issue also didn’t involve an antagonist. Personally, I like the choice. The Starfire character has not only been vastly underutilized in The New 52, but over the course of her thirty five year history she’s always been presented as part of a team. It makes sense for the first two issues of her solo series to focus on her as a character and building her environment before bringing in any “crime-fighting” tropes. 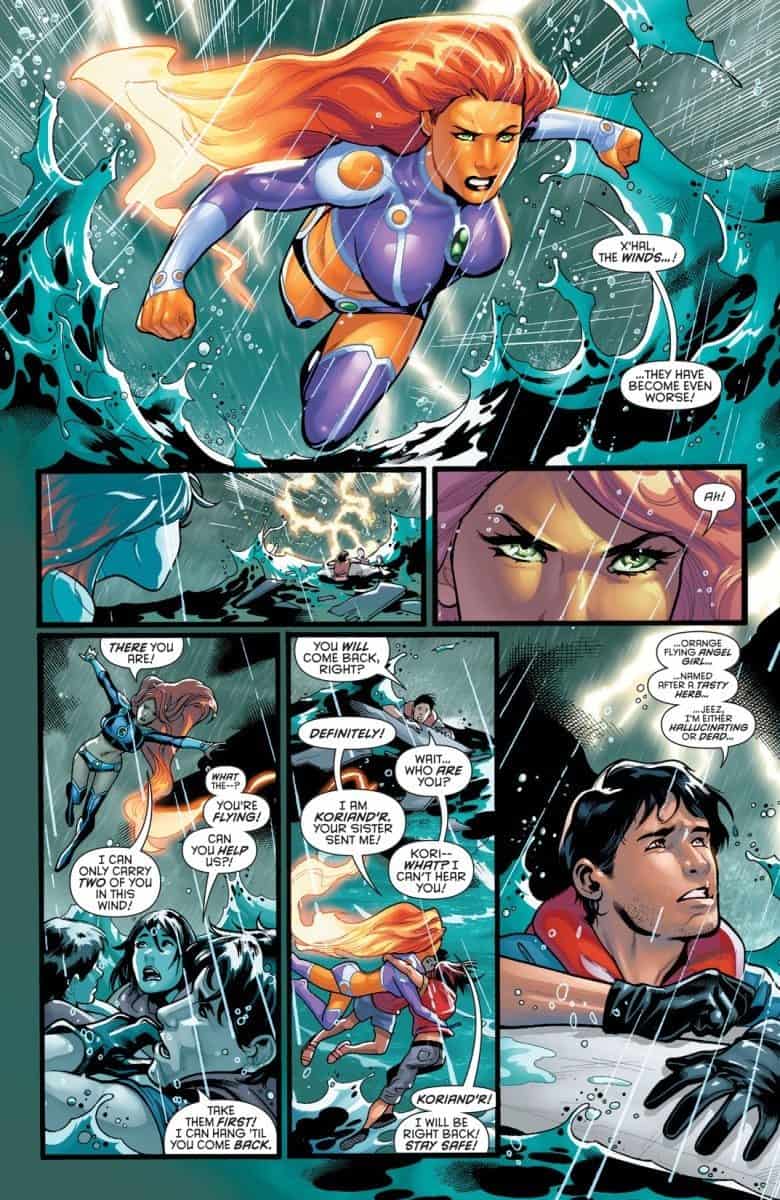 The issue unfortunately does falter a bit in characterization. Starfire is the same perfect mix of her traditional comic and animated TEEN TITANS persona, however she’s underutilized in the book. Outside of the conversation she has with Sol near the end of the book we don’t really get much dialogue or inner-thought out of Kory even though she gets a decent amount of page time. Sheriff Gomez doesn’t fair much better. While she does get a cool moment with a police tank, most of her scenes feel static and one-dimensional, as opposed to the fleshed-out character we met in the first issue. Sol has potential as a possible love interest for Kory, but we don’t really know more than surface details about him. 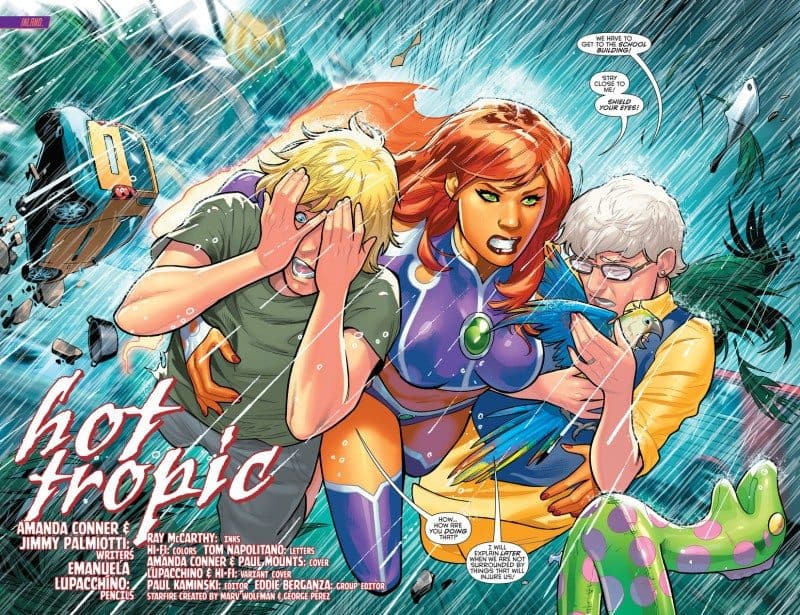 The art in this issue, much like the first, is fantastic. Emanuela Lupacchino, along with inker Ray McCarthy, really capture the brutal and devastating nature that a hurricane wreaks, and do a great job of playing Starfire’s powers off the natural disaster. The artistic highlight of the book in my mind is the two-page spread early in the book of Kory rescuing her neighbors. It really capture the fury of the storm and the heroic nature of Starfire. A final note on the art that I meant to mention last time is that Starfire is presented with eyeballs in this book as opposed to the traditional full-green pupils look. Initially I was thrown off guard by this change, however Lupacchino’s Kory would lose a lot of its expressiveness without eyeballs, so it’s a fair trade-off to me.

STARFIRE #1 was one of my favorite single issues of any comic I’ve read this year and I had high expectations going into this second issue. While this second issue falls short of the first in terms of its characterization, it matches the first in plot and art-work, making STARFIRE #2 a definite must-read, and the tease of a future villain should keep readers coming back for more.