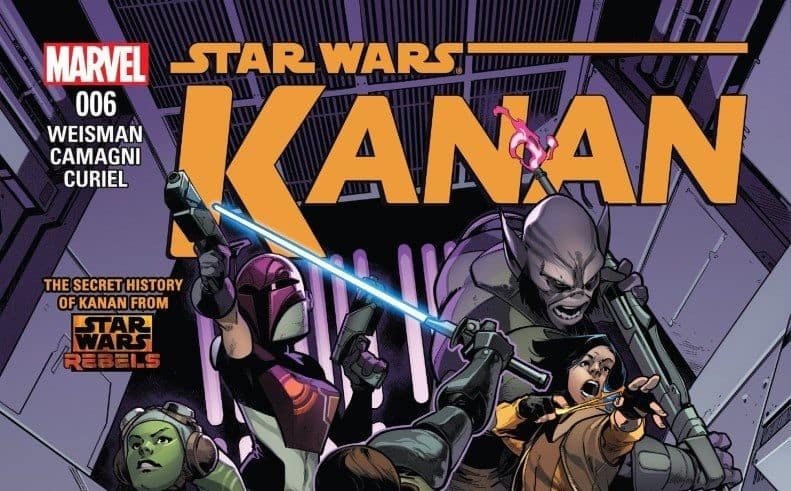 Kanan and his crew return to the place where his life turned upside down. Can he forget past trauma and focus on the job at hand?

The planet Kaller is where Kanan’s Jedi Master, Depa Billaba, was slain by Clone Troopers after Emperor Palpatine issued Order 66. Kanan thought he’d left that planet, along with his Jedi past, far behind him. His work to help those in need on Lothal, however, means returning to the planet for supplies. Painful memories and familiar faces imperil him and his crew at every turn and friends are in short supply… 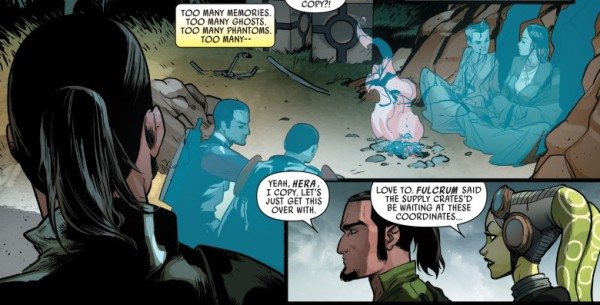 KANAN #6 functions well as a wrap-up of the previous arc and a set-up for the new one. It’s paced well and respectfully for an introspective story, allowing the reader time to appreciate Kanan’s struggle with returning to a planet that holds so much pain for him. The expanded role of his crew in this issue, however, keeps things from getting too heavy, punctuating those reflective moments with humor and driving energy. They work well as a device to not only snap Kanan out of his reverie, but to keep the issue moving forward. It’s welcome, too, because their presence could have easily felt forced, a shoehorned inclusion of characters because this a comic based on (and promoting) a TV show. The last five issues were spent with Kanan and his old compatriots, but the transition to his new crew is smooth and well-executed.

READ: THIS ARC OF KANAN IS ENDING, BUT ANOTHER STAR WARS STORY IS JUST BEGINNING! CHECK OUT OUR REVIEW OF SHATTERED EMPIRE #1!

Jacopo Camagni takes over pencilling duties from Pepe Larraz and he doesn’t miss a step. The art remains loose and dynamic, perfect for a comic based on an action cartoon. Camagni knows how to craft quiet moments, too, rendering emotion and detail effectively to give Kanan’s reflection that added weight. David Curiel’s colors add a rich layer to everything: they can pop and glow as good as the TV show, but they can also be subtle, and even darker–appropriate for the emotional stakes and the fact that the crew of the Ghost (their ship) deal with criminals and this story takes them to the city’s seedy underbelly.

Kanan’s memories appear in a bluish hue, superimposed over the action in each panel and never feel intrusive or forced. It’s an effective device that actually fits well in the STAR WARS world: hologram messages are the same blue, and, appropriately, the spirits in the films are as well.

READ: KANAN IS A NEW STORY IN THE STAR WARS UNIVERSE, BUT DID YOU KNOW THERE’S A WHOLE OTHER UNIVERSE OF OLDER STORIES? CHECK OUT OUR ARTICLE ON THE STAR WARS EXPANDED UNIVERSE!

KANAN #6 is executed with such care and skill that it’s a delight to read. The pace gets a little odd at the end, however, with an explosion of violence that brings the issue to an abrupt halt. It’s hard to be upset about it, though, because it makes me anxious for KANAN #7. On top of that, the issue teases the return of Janus Kasmir, Kanan’s ex-partner and one of the greatest new characters in all of the new STAR WARS stories. One can only hope he makes a splash. The dynamic of the Ghost’s crew is such that I’m excited to see what would happen with Janus thrown into the mix. 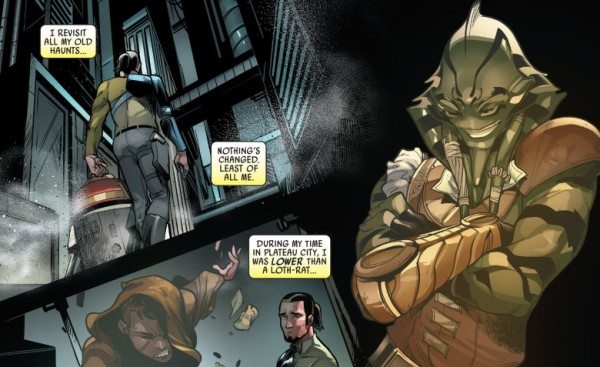 All-in-all, KANAN #6 is a solid issue, a quality issue, and I think it deserves more attention. Between the excitement over STAR WARS, and DARTH VADER, and even SHATTERED EMPIRE, people may not pay attention to a comic based on a “kid’s” show. It’s actually one of the better told stories in the STAR WARS universe, and that shows no signs of changing.

WANT TO READ MORE BY DANNY? THEN CLICK HERE!