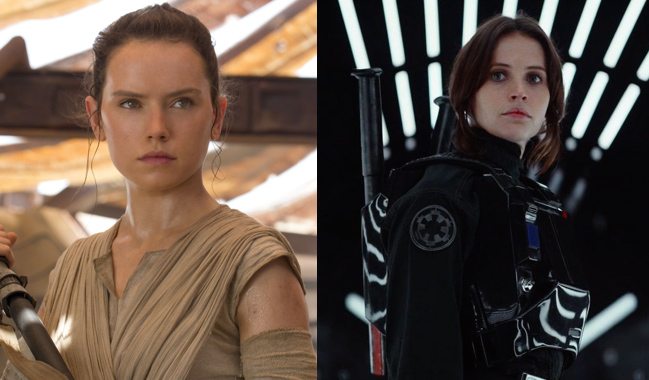 Disney’s second Star Wars film is finally here! There is collective praise for ROGUE ONE: A STAR WARS STORY and its heroine, Jyn Erso (Felicity Jones). Jyn is a new character in the Star Wars universe much like Rey was in THE FORCE AWAKENS. Both female leads took on a distinct quest towards their respective destinies. We know Jyn’s destiny because she and her comrades paved the way for a new hope (see what I did there?). While Rey aided in the destruction of the Starkiller Base, with the assistance of Han Solo (Harrison Ford), Finn (John Boyega), and Poe Dameron (Oscar Isaac). The two leads have similar traits, however in THE FORCE AWAKENS Rey lacks leadership, and until she acquires that ability, can she have that same potential moxie Jyn has?

ROGUE ONE Review: Revenge of the Stakes

At the start of both movies, Jyn and Rey are found alone before their journeys begin. So before both characters could take on their new roles, there is a point where they didn’t have a choice to stay in their niche. Rey was on her own for a long time waiting for someone’s return to Jakku, but when we see the events that followed she is dragged into a war against the dark side. Rey wants to help return BB-8 to the Resistance but after she accomplished that she wanted to go back to Jakku. On the other hand, Jyn was rescued from prison by the rebellion without her consent. Jyn was forced to accompany Cassian Andor (Diego Luna) to find her father, Galen Erso (Mads Mikkelsen), and unknowingly help assassinate him. These two examples showed that Rey would flee from danger while Jyn would rather impulsively go against it. Rey is not fleeing because she’s scared but because she would rather selfishly stay on Jakku. If Rey were like Jyn, she would have had the audacity to look for the person she was waiting for and take initiative.

Rey and Jyn share some similarities. Both have suffered a great loss. Jyn had lost her mother to the Empire while her father was taken captive, leaving her on her own for many years. Rey was left behind by someone at a young age (assuming it was Luke Skywalker) which was a traumatic experience for her. These experiences formed a design that would lead them to find what they were looking for. Originally, Jyn wanted to find her father, but because of his untimely death, she forged a new purpose in carrying on his work by stealing the plans to the Death Star. For Rey, she was waiting on Jakku for someone to return to her. But in meeting BB-8, Rey’s gained a new mission by leaving Jakku to return him to the Resistance, then making her way to Luke’s lightsaber and her powers’ manifestation. Prior to THE FORCE AWAKENS, Rey should have taken initiative in finding her mystery person or been more eager to leave the planet to find them.

ComicsVerse Review of ROGUE ONE: A STAR WARS STORY

THE FORCE AWAKENS was Rey’s introduction, so we still don’t know who she really is. All we know from Rey is that she is aware of the legends of the Jedi and the Force. We also know Rey was capable of defending herself because she was self-taught, but not enough to go against a sith or an army. Jyn, on the other hand, was trained in guerrilla tactics by Saw Gerrera (Forest Whitaker). Jyn’s extremist military background granted her true grit, knowing full well the mission she would lead could be her last. From what we know so far, Rey is aware of what the implications are if she doesn’t fight against the New Order. So Rey will have to train and gain as much courage as Jyn to go up against the new foe. Rey would then emulate Jyn’s new hope for a new generation.

While Rey is on a new path to discovering her purpose in the galaxy, Jyn had already found hers by fighting against the Empire. Because of Jyn’s actions, she ignited a sentiment of hope, in turn uniting the Rebels to attack Scarif. Thirty years later, Rey will have to go through intense training to confront the New Order. Rey showed us her potential to fight against evil like Jyn. This was best illustrated when Rey faced her fear and fought back Kylo Ren (Adam Driver) at the end of the film. Both Jyn and Rey have the same innate affinity to do what is right, and with a bit more training, Rey can stand on the same pedestal as Jyn.