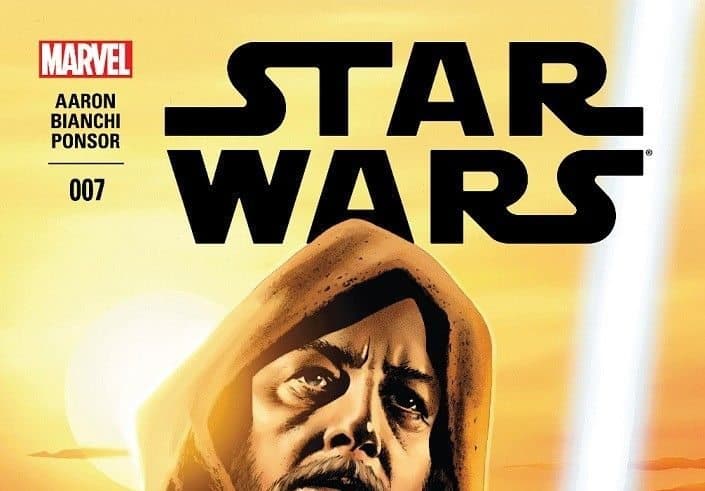 After six issues of story following the events of Episode IV, Jason Aaron and company have seen fit to bestow upon fans a glimpse at happenings between the Original and Prequel Trilogies. This is something I’ve been waiting for ever since Marvel announced their line of Star Wars comics: a book that acknowledges more than just the early films.

You might say that I’m a bit of an oddity in that sense, a Star Wars fan who embraces not just some of the films but ALL of them. Yes, even The Phantom Menace. That said, I certainly understand the issues that longtime fans take with those films, so I’ll not delve into that topic too deeply except to say that my love of all six movies greatly enhanced my reading experience with this issue. More on that in a few paragraphs.

STAR WARS #7 is a flashback story taken from the journals of Obi-Wan Kenobi. A few years have passed since Emperor Palpatine ordered the extermination of the Jedi Order and scattered what heroes remained to the distant corners of the galaxy. In that time Obi-Wan has left behind his life as a Jedi and vowed merely to protect the young Skywalker boy, not teach him the ways of the Force. We all know how well that vow holds up.

We’re given insight into Obi-Wan’s new hermit lifestyle, as well as his exploits into vigilantism as he defends Tattooine’s moisture farmers from thugs sent by Jabba the Hutt to collect “water taxes” during a harsh drought. It is now my opinion that young Obi-Wan is cooler than Batman.

This little history lesson is all well and good—and expertly brought to life by guest artist Simone Bianchi (ASTONISHING X-MEN, WOLVERINE), whose art I adore and hope to see more of in this series—but one detail in particular stands out:

Obi-Wan refers to his late mentor, Qui-Gon Jinn, by name.

This is a HUGE deal for someone like myself who has grown to enjoy the complete cinematic saga that is Star Wars. Qui-Gon has always been one of my favorite characters, and one sorely missed since his rather sudden departure in Episode I. To see him referenced directly, even in so small a manner as how it occurs in this book, brings me renewed hope that Marvel—and perhaps Disney—will disregard the shameful behavior of those fans who still vehemently whine about midi-chlorians and purple lightsabers after sixteen long years.

Aside from being the strongest chapter in an all-around solid series, STAR WARS #7 gives me reason to believe that the day will come—sooner, rather than later—when all who love this most epic of franchises embrace the past, present, and future of their favorite saga, not just the nostalgic parts.