This year marks the 40th anniversary since the release of the original STAR WARS film on May 25th, 1977. This month, writers at ComicsVerse will be bringing you our insights on all things STAR WARS as we look at where the series has been and where it will take us next in the galaxy far, far away…

Consider a world where A NEW HOPE was the only STAR WARS film. The film would just be called STAR WARS . There would be no prequels, no sequels, but you can be sure there would still be dump trucks full of toys.

Does the world still remember STAR WARS without the massive saga of the Skywalker family attached to it? Undoubtedly. All of the films in the STAR WARS series have provided great cinematic entertainment. However, only one of these films had the serendipitous mixture of creative energy and talent to create a culture phenomenon in one film.

A Long Time Ago…

Like any great film, the original STAR WARS was beset by challenges. George Lucas’ original draft of the film is practically unrecognizable when compared to what we know as STAR WARS. The essential components are there. Still in place are the droids, the stalwart space knights, the alien creatures, and the battle between good and evil. 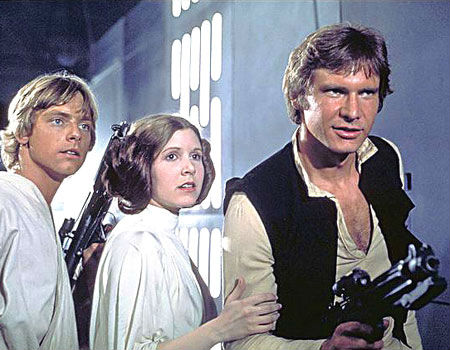 There are stockpiles of critical theory about Lucas’ inspirations for STAR WARS. Joseph Campbell’s monomyth, Arthurian Legends, Flash Gordon serials, and Akira Kurosawa films all inspired Lucas. It is a cultural buffet slapped together on one plate. Each ingredient is perfectly chosen and beautifully blended.

Modern culture is influenced not by all of these ingredients but by one dish: STAR WARS. It’s that universality that has given this single film its staying power. We can argue over which film is the “best,” but those arguments are irrelevant without the force of the original.

A NEW HOPE managed to synthesize so many stories into one modern tale. By cherry picking all of our cultural myths, Lucas created a singular vision welcoming to all cultural ideologies and beliefs. The eternal battle between good and evil is present. There is also the philosophy of the Force connecting all living things. STAR WARS is a language all of its own. Each of those ideas can be traced back to the first film. The lightsabers, the Force, the Jedi are all cultural touchstones that are completely realized in this first film.

CLICK: How ROGUE ONE brings back stakes to the modern blockbuster

These concepts would evolve, but A NEW HOPE incorporates them and refuses to be hindered by them. The world building is breathtaking. The simple dialogue builds a vast world around our characters. Lines like “You fought in the Clone Wars?” and “I was Jedi Knight like your father” give us a peek into a larger world of adventure and wonder. Obi-Wan (Alec Guinness) is the storyteller, and we are his audience. We hang on to his every word as it paints a picture beyond the frame of the film.

This hodgepodge of influences coalesces through cinematic alchemy into one story. This is the moment where the legend of STAR WARS is truly born. This is where decades of sequels, prequels, and extended universe novels begin. Here Lucas built a universe. Lucas knew a story alone wouldn’t make a film. Therefore, Lucas brought together an array of talent to bring his vision to life for future generations to follow.

Twin Suns of Tatooine Taught Me Everything I Know

It’s one of the most iconic images from a film series that is full of iconic images. Luke stands on the sandy hills of his home on Tatooine. We see the expanse of the desert vista before him. It’s something out of a John Ford western but with a sci-fi twist. The twin suns of Tatooine movie in their orbit across the sky. This image represents the two paths laid out before Luke. His choice is clear: the life of a farmer or the life of adventure. Luke’s everyman nature is what has given STAR WARS part of its success. He is every young person who has seen the future laid out in diverging paths before them.

The performances of these characters build empathy with the audience. STAR WARS presents a vision of a “lived-in” sci-fi universe. The spaceships in this world aren’t sleek and slick but battered and weathered. The acting from Mark Hamill, Carrie Fisher, and Harrison Ford give that same quality of naturalism to the outlandish. The insanity around him perpetually nonpluses Han. Leia isn’t the weeping lily princess of fairy tales. She is brash, impulsive, and witty. She leads with authority and with action. Then we have Luke the farm boy. He is naive, hopeful, and not as cool as he thinks he is (with all love and respect to Mark Hamill). But he is genuine and believable every step of the way.

These characters certainly have great moments in THE EMPIRE STRIKES BACK and RETURN OF THE JEDI. Both are excellent films, but A NEW HOPE builds the emotional foundations for each character. Try dropping someone into any of the sequels without first watching STAR WARS. Luke’s revelation that Darth Vader is his father means nothing without the knowledge of Luke’s entry point into this world. He became a Jedi in part to honor his father’s memory. Without knowing where Luke comes from, Vader’s true identity lacks impact.

Even the romance between Han and Leia is devoid of charm without understanding these characters in A NEW HOPE. Han has grown from the selfish rogue and mercenary to someone who is willing to dedicate himself to a cause. Leia, with her planet gone, lowers her defenses and allows herself to let someone into her life. Their romance is about two people who found each other at a turning point in their lives. Without that turn in A NEW HOPE, the romance has no spark. 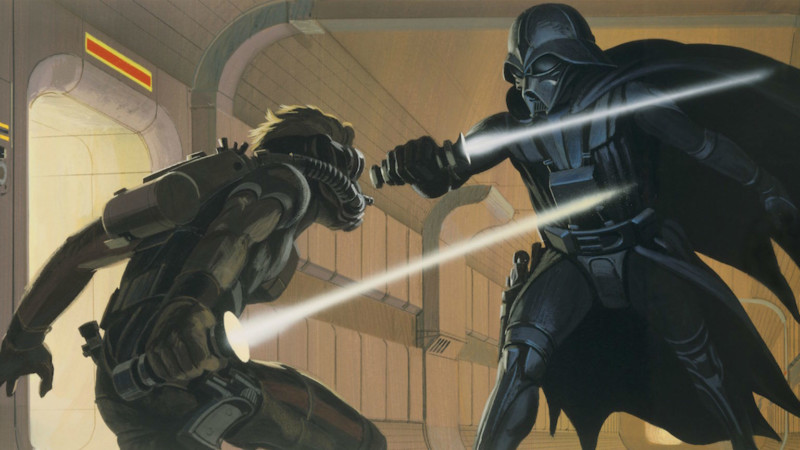 Many fans see George Lucas as the sole father of STAR WARS, but there are two major collaborators whose work on A NEW HOPE are worth mentioning: Ralph McQuarrie and Marcia Lucas. The influence of these two creatives is vital to the success of the original film. Ralph McQuarrie was an artist and concept designer who developed the distinct look of the original trilogy. When George Lucas’ original treatment for STAR WARS became too bogged down in mythology, McQuarrie’s incomparable art provided a vision for what the films could become. It was his aesthetic choices that helped create the “lived-in” feeling of the STAR WARS universe.

Unfortunately, McQuarrie had retired by the time George Lucas was ready to create the prequels. Make no mistake; the prequel trilogy had incredible design work. Perhaps McQuarrie’s sleek and simple art designs could have reigned in some of the excesses of the prequels. In fact, McQuarrie’s original pieces are still being used to influence elements of modern STAR WARS. Rey’s costume design in THE FORCE AWAKENS and the STAR WARS: REBELS cartoon.

McQuarrie’s work has been lauded for its influence on STAR WARS, but not every creator behind A NEW HOPE has been so lucky. During the making of STAR WARS, Marcia was George Lucas’ wife. However, their messy divorce has erased her impact on the STAR WARS trilogy. The fact that A NEW HOPE would not exist as it does today without her influence only deepens the injustice of her omission within the history of STAR WARS.

At his website, author Michael Kaminski provides an incredibly detailed look at Marcia Lucas’ contributions to the filmography of George Lucas. A few choice anecdotes highlight how essential she was to the success of A NEW HOPE. One addresses how Lucas’ initial editor of the film had turned in a lifeless first cut. Marcia, who had been making a name for herself as an editor in her own right, stepped up to take on the massive task of recutting the film from just the original dailies.

CLICK: Speaking of Sci-Fi anniversaries, check out our series on the 50th Anniversary of STAR TREK

Marcia, along with editors Richard Chew and Paul Hirsch, brought the film to its final form, but it was Marcia who was responsible for key components of the movie. She rearranged and reconceptualized the film’s climactic final battle and warned George that

“If the audience doesn’t cheer when Han Solo comes in at the last second in the Millennium Falcon to help Luke when he’s being chased by Darth Vader, the picture doesn’t work.”

For all of her work, Marcia received an Oscar for Best Editing at the 1977 Academy Awards, but she also has had her name erased from much of STAR WARS history. Marcia was one of the few creative voices who had Lucas’ ear and his total trust. It’s easy to point to her absence as one of the factors that led the prequels astray. Her insights and skills as an editor are in part what made STAR WARS a cultural juggernaut and what made A NEW HOPE the best of the STAR WARS films.

A New Hope and New Perspective

In film criticism, auteur theory has dominated the analytical conversation. Credit for all creative choices in a film tends to fall directly on the director. When it comes to STAR WARS, George Lucas is not the only person responsible for STAR WARS’ success. Lucas’ vision was brilliant but vast and unwieldy. It only came to life because of the hardworking men and women in front of and behind the camera.

On the film’s 40th anniversary, it’s crucial that we look at all of the artists who brought STAR WARS to life. On paper, it’s a movie that probably never should have existed. It not only existed, but it also became a keystone of our American culture for decades.

Fans love STAR WARS for the universal nature of its mythic story, but I believe there is something deeper to it. Just as the film is a coalescence of cultures and ideas, the film’s creation is a fascinating blend of artists and creators. STAR WARS: A NEW HOPE, removed from the blockbuster success, the years of commercial licensing, and the endless array of sequels, is one of the finest pieces of pure collaborative artistry that films have produced.

A NEW HOPE was created out of love, imagination, and creativity. For that reason, it became a valued part of our culture and the best of the STAR WARS films.