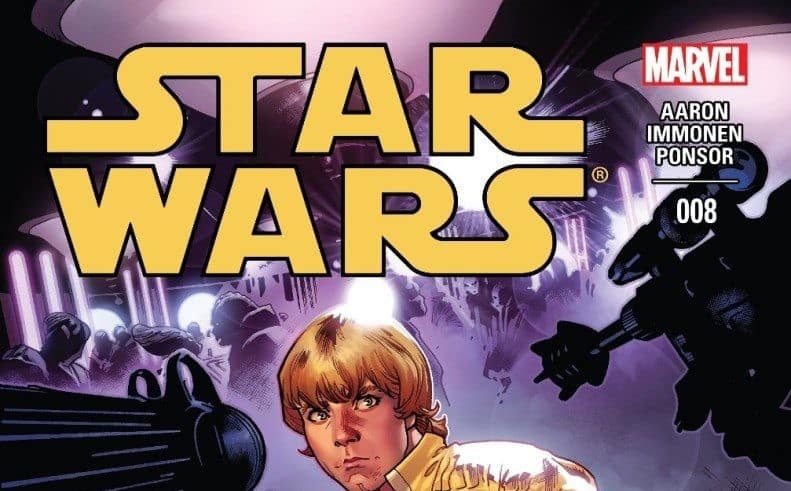 STAR WARS #8 marks the beginning of the series’ second story arc, and it does so in grand fashion with the introduction of artist Stuart Immonen (NEW AVENGERS, ULTIMATE SPIDER-MAN), and the continuing theme of bringing elements of both film Trilogies together.

Picking up where #6 left off — #7 was a one-off flashback — the latest chapter of our saga focuses largely on the drama going on between Leia, Han, and Sana Solo, the woman claiming to be Han’s wife. These scenes tell us a lot about the sort of people Han affiliates with, for as soon as Sana realizes Leia’s identity she immediately concocts a scheme to sell the rebel princess to the Empire.

Elsewhere, Luke grows frustrated with the unclear purpose behind Obi-Wan’s secret journals, and decides to go straight to the source for information on the Jedi Order: Coruscant. (My inner Prequel Trilogy fan is nerding out.) To do this he travels to Nar Shaddaar, an entire planet of scum and villainy, in hopes of gaining passage to the Jedi’s old home world. Being very much the inexperienced kid we all grew to love in Episode IV, Luke’s negotiation skills fall flat. And just in time for his lightsaber to be stolen!

READ: Get caught up on STAR WARS with our review of SKYWALKER STRIKES!

Jason Aaron once again delivers a script that feels like classic Star Wars, providing the right mix of adventure and dramatic dialogue that the films are known for. Characterizations remain strong, although a few lines seem out of place. For instance, Leia doesn’t seem the type to end a sentence with “…yeah.” It doesn’t hurt the book, however, so I would urge die-hard fans to let it slide.

On the artist front, STAR WARS #8 is a perfect marriage of elements I loved about John Cassaday’s six issues and Simone Bianchi’s work on #7. Stuart Immonen’s grasp of likenesses is on par with Cassaday, however far less stiff. This added fluidity of motion enhances the action sequences and helps the book feel more distinctly like a comic, which is something I loved about Bianchi’s pencils last month. Overall the art is well-executed and tonally consistent with the first six issues.

I’m beginning to think this STAR WARS title is a dream come true, with top-tier talent giving their all to create a reading experience that lives up to the legacy of the films. That said, a very positive part of me is thinking that Aaron and Immonen are just getting started!