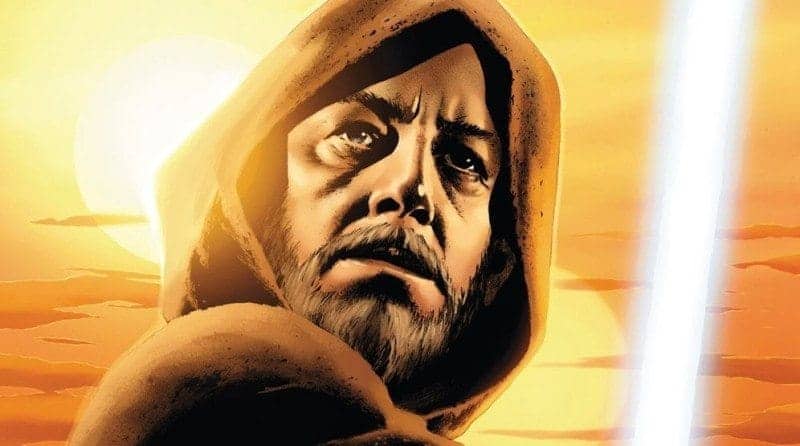 What was Obi-Wan Kenobi doing on Tatooine all those years while Luke was growing up? Let’s find out!

STAR WARS #6 ends with Luke Skywalker finding the journals of Obi-Wan Kenobi in his home on Tatooine, and STAR WARS #7 depicts an excerpt from those journals. Tatooine is in the midst of a devastating drought, and Jabba the Hutt and his thugs are taking advantage of the moisture farmers (it never really dawned on me until this issue that moisture farmers literally do that: farm moisture from a dry planet. No wonder Luke was desperate to leave), extorting “taxes” and just leaving most farmers to starve. Obi-Wan (going by “Ben”, of course) is in exile–and in hiding. His personal sense of responsibility as a Jedi comes into conflict with the final task issued by his Masters–protect Luke Skywalker–in a quick story that is less action-packed and more existential.

I’m a sucker for a good framing device, and as simple as the one for STAR WARS #7 is, it’s a good one. One-shots are common in comic books, so there really is no need to justify it, but STAR WARS does. They don’t bend over backwards to do it, either: Luke finds Obi-Wan’s journal at the end of the last issue, and rather than try to fit excerpts/lessons/notes into the usual narrative, they decide to devote an entire issue to one entry, giving us a greater sense of both what Obi-Wan was going through, and what may be going through Luke’s mind as he reads these. It remains to be seen what narrative role the journals will play in the rest of the comics, but STAR WARS #7, at the very least, is satisfying as a detour.

Immediately, Simone Bianchi’s artwork is dynamic, which is helpful for a story that’s mostly exposition and internal monologue. Despite it being a desert planet in the midst of a drought, Tatooine looks like a living, breathing planet thanks to Bianchi. With Justin Ponsor’s colors, that effect is only deepened. The world seems saturated and thick and, well, hot. The character designs–specifically for Obi-Wan and Luke–are well-done, giving us not only a clear sense of how old they are in this story, but also what’s going on in their heads–their emotions read clearly on their face, adding depth to a relatively straight forward story. I only wish Jason Aaron would trust that artwork a bit more. 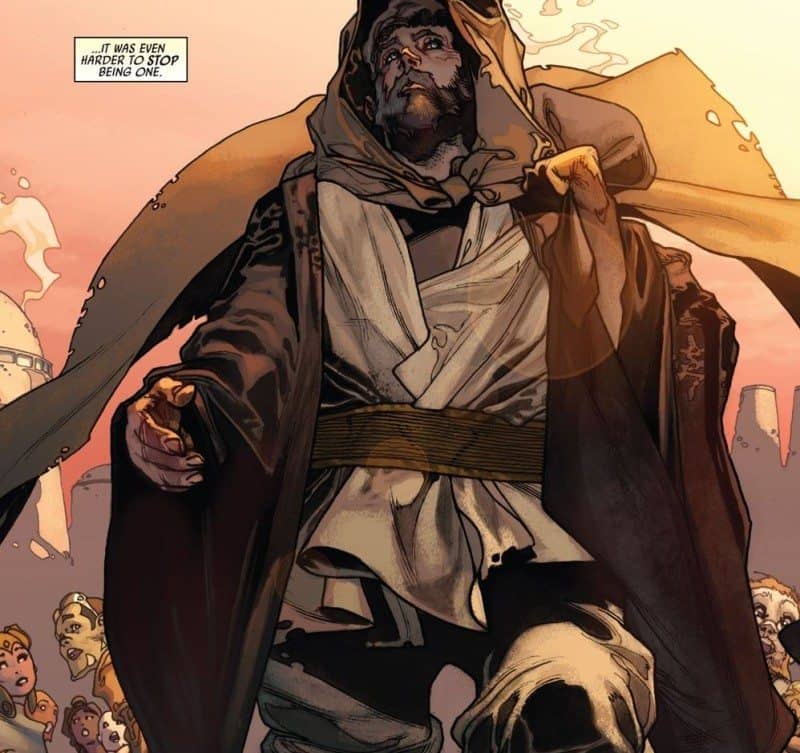 In the issue’s only action sequence, Bianchi and Ponsor do a fine job of laying out the action, but Aaron saw it necessary to include dialogue that explains what’s happening. It sounds awkward and forced (Heh. “Forced.”), and detracts from an otherwise interesting sequence that isn’t just action for the sake of action: Obi-Wan can’t risk exposing himself as a Jedi, so he has to save Luke while hiding in the shadows, creating this great idea of a “ghost” or “spirit” defending the helpless on Tatooine. But that seems par for the course–dialogue-wise–for Aaron in his run on STAR WARS. Some things don’t need to be explained or highlighted, but he does it anyway.

Aaron’s work on STAR WARS feels much like George Lucas’ later work on the films: filled with great ideas, but losing something in the small stuff. One of the greater criticisms of the franchise is that, while it’s big and sweeping and exciting, it suffers in the interpersonal, in the emotional. I think that’s accurate (though not a deal-breaker), and is on display in STAR WARS #7 as well. This issue is definitely a step in the right direction towards rectifying that, but it still stumbles.

How Obi-Wan spent his time on Tatooine is one of the greater mysteries set up by REVENGE OF THE SITH and A NEW HOPE–one with great storytelling potential, and explored many times in the old Expanded Universe. Jason Aaron gets that, giving us Obi-Wan in the midst of an existential crisis, engaging with his Jedi training (or lack thereof for this particular scenario), and wondering just how to balance his personal responsibility with his immediate responsibilities. It’s rife for angst and a deeper, spiritual exploration of the Force, the Jedi, the universe, and just Obi-Wan as a person. It’s just a shame that Aaron & Co. attempt to do all of that that in one issue. You’re left definitely wanting more (which can be a good thing), but it also means some of the greater ideas are just hinted at.

All that being said, STAR WARS #7 is definitely a highlight of the run so far. Things got a little messy last issue, and returning to a simple story was a nice breath of fresh air, one that I hope can inform issues going forward. As with most STAR WARS issues, this one is definitely better for fans (in fact, it’s kind of a must-read for fans), but it’s not without merit for someone just interested in checking it out.