In STAR WARS #24, the exciting fourth installment of “The Last Flight of the Harbinger,” a successful takeover of the Star Destroyer Harbinger has given new life to the Rebel Alliance as they race to save the planet Tureen VII. However, an elite Imperial threat stands in the way of Luke, Han, and Leia’s mission: the SCAR Squad and their bloodthirsty leader, Sergeant Kreel!

Writer Jason Aaron and artist Jorge Molina continue to craft superb action sequences in this issue, as “The Last Flight of the Harbinger, Part IV” features some of the most impressive set pieces the renewed STAR WARS series has offered yet. An extensive lightsaber battle featuring stormtrooper Kreel and Luke has been teased for a while now, and the wait absolutely pays off. The showdown, which the issue revolves around, is excellently drawn by Molina and contains some unforgettable imagery.

Luke’s duel with Kreel is fun and exhilarating, but not just for the combat. It fleshes out their traits as characters and provides some much needed personality for the mysterious Stormtrooper in particular. Kreel’s diabolical toying with Luke as they battle separates him from his fellow soldiers in terms of his personality rather than just appearance, as is the norm for unique troops in Star Wars lore. 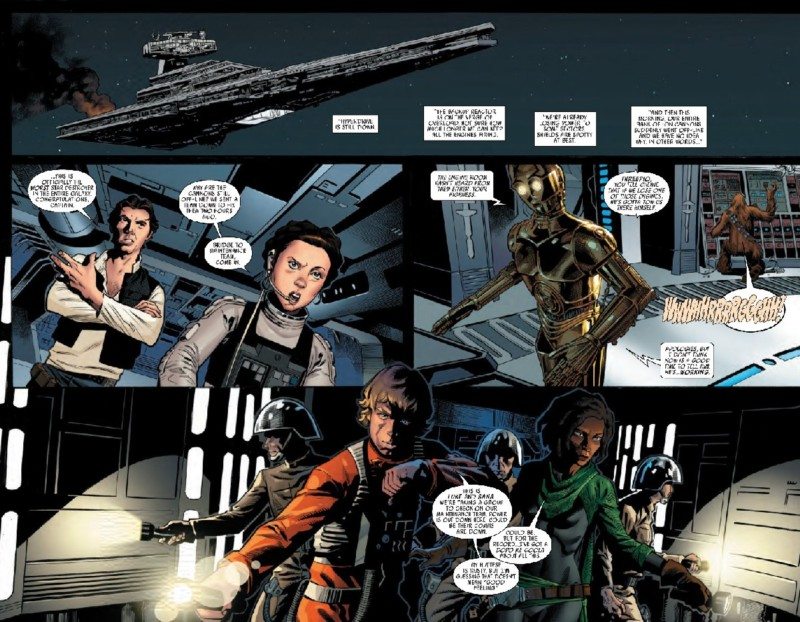 On the other hand, the writing behind Luke in this issue is less than stellar. While he can be compelling if given the correct dialogue, here Luke comes off as the corny interpretation of the character so often mocked by fans. In an issue that gets everything else right in terms of writing, from classic quips between Han and Leia to Kreel’s menacing nature, it’s disappointing nothing original is being fleshed out with Luke’s portrayal. There were chances in this issue to develop Luke’s character effectively, however they were squandered with poor dialogue. Hopefully this will be rectified in the next issue when Darth Vader makes an appearance, which is always a catalyst for some of Luke’s best moments.

While Luke’s arc leaves something to be desired, the issue is saved not only by the excitement of his battle with Kreel, but with the events outside of the duel as well. The combat art in this issue is particularly well realized, as the boarding of the Harbinger allows ample opportunity for eye-catching moments. The visuals of SCAR Squad shine during their battle with the Rebels, giving a unique style to the standard Star Wars blaster standoffs, while the space combat shows off some marvelous TIE Fighter imagery. One sequence in particular, in which Sana and a Rebel squadron are blown out of an airlock, is especially riveting. Throughout the issue, Aaron’s narrative choices give Molina the chance to create complex artwork and it works like a charm.

READ: Why STAR WARS Owes Its Brilliance to Comic Books!

In terms of writing, Aaron continues to get the team (outside of Luke) right. He excellently portrays Han and Leia as they struggle to save the crew aboard the ship, depicting both their tension as well as their individual character strengths with great prowess. Han sometimes feels a little bit forced when in dramatic situations, but the charm of the character powers through when he’s presented with an opportunity to pilot the Destroyer. Leia is as cool as ever, playing the role of a steadfast leader while displaying her trademark sarcasm to great effect. Sana continues to be an excellent original character that is well-paired with a naïve Luke. 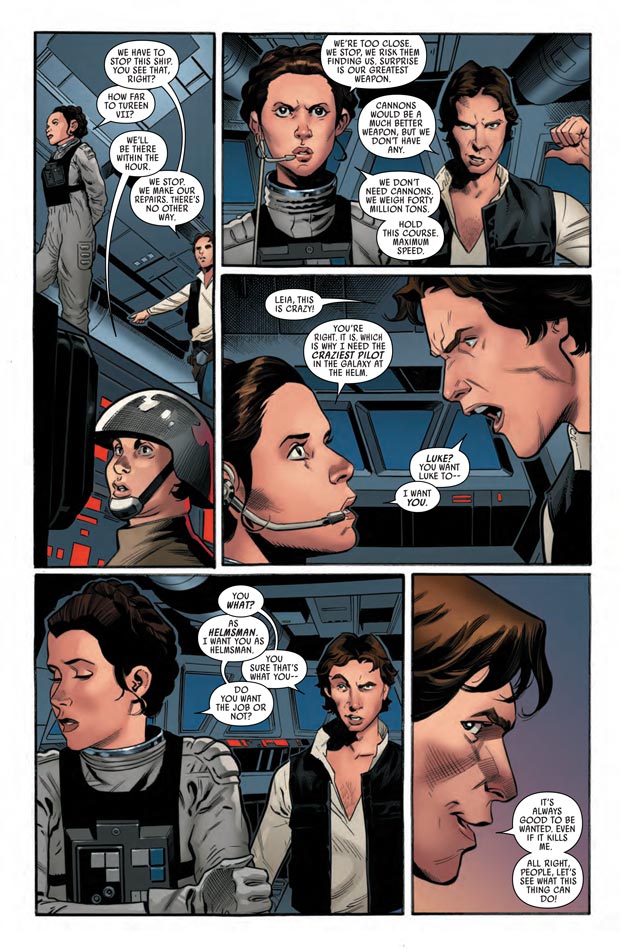 Overall, “The Last Flight of the Harbinger Part IV” is a solid issue that’s held back from greatness by character flaws. It highlights everything fantastic and imperfect about this STAR WARS run: beautiful art and loyalty to the characters, but also dialogue and character development that at times can feel poorly written. As Darth Vader comes into the “Harbinger” arc next issue, one can only hope the writing can start to deliver on its promise and truly make STAR WARS stand out as a must-read series.