The first volume of Mike Johnson and Tony Shasteen’s STAR TREK: BOLDLY GO series takes place soon after the events of the 2016 film, STAR TREK BEYOND. In the film, the USS Enterprise was destroyed by the villainous Krall. Because of this, we find Captain James Tiberius Kirk and crew aboard the USS Endeavor. It is a little strange to see Kirk in charge of a ship other than the USS Enterprise, but BOLDY GO’s narrative moves so smoothly that you find yourself accustomed to the transition immediately.

The six issues that make up this graphic novel spend the majority of the narrative focusing on a self-contained story. Nevertheless, they do spend time developing familiar characters and new allies. Jaylah of STAR TREK BEYOND gets her time in the spotlight in the fifth issue, bringing the character some positive closure. Along with this, new characters, such as the Romulan First Officer Commander Valas, bring new life and conflict into the realm of familiar characters. Ultimately, STAR TREK: BOLDLY GO vol. 1 is an engaging collection of stories that will please fans of the STAR TREK phenomenon. 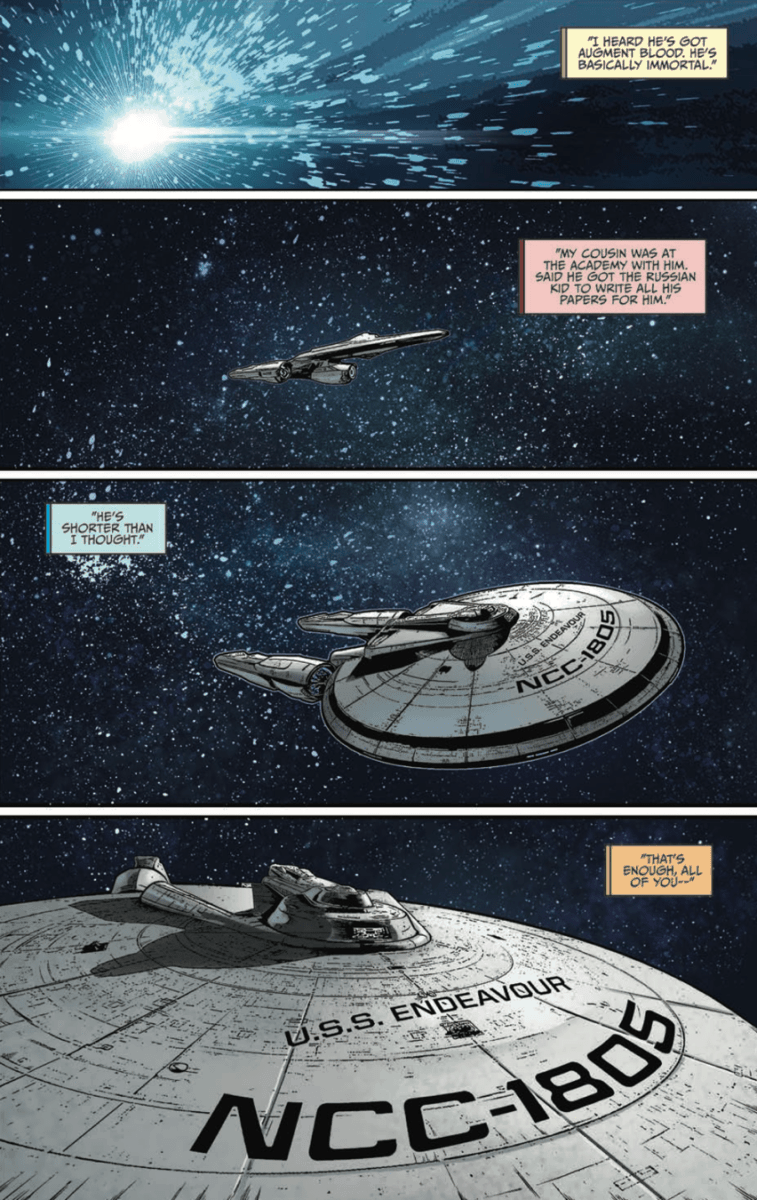 The story commences with a depiction of Captain Kirk’s new crew and ship due to the relocation of familiar crew-members. Nyota Uhura has decided to join Spock on his sabbatical in New Vulcan while Hikaru Sulu is second-in-command on the USS Concord. Bones and Chekov are amongst the only few remaining faces from Kirk’s Enterprise crew. As a result, Kirk does find himself attempting to grow accustomed to the changes. Amongst these changes is the appointment of Commander Valas as the new First Officer. Due to her Romulan background, many of Kirk’s peers are hesitant to trust her. Despite this, Valas continuously defends herself and her loyalty to the crew.

READ: What is the one aspect each installment of the STAR TREK franchise shares? Find out here!

Soon enough, the action begins with a distress call from the USS Concord. The ship is completely destroyed, and the Endeavor rescues the survivors, including Sulu. As Bones tends to his injuries, Sulu falls unconscious, uttering the only words he remembers the enemy relaying before they destroyed the Concord: “resistance is futile.” The crew discovers that the enemy, known as the Borg, are headed to Romulus. So, Kirk decides to follow them, despite the fact that the Endeavor’s entry into Romulan territory is incredibly risky. In the meantime, Spock and Uhura decide to help their former peers in the effort to stop the Borg. 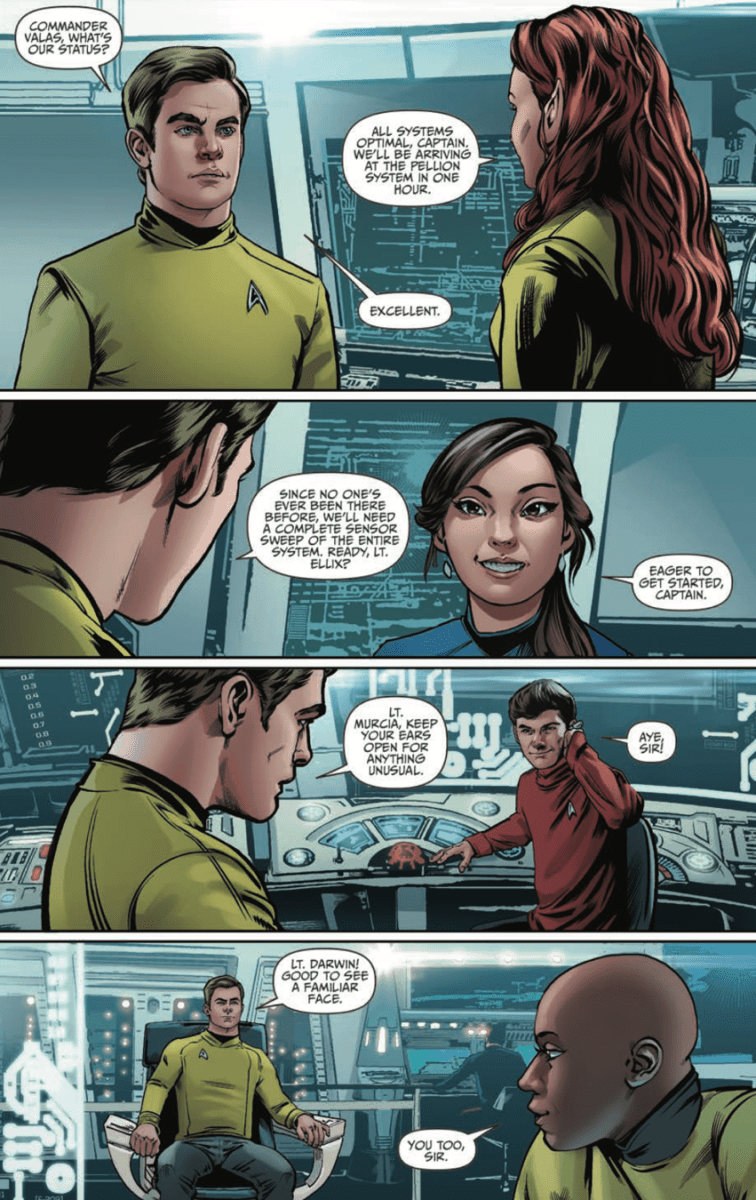 Perhaps the most exciting aspect of STAR TREK: BOLDLY GO vol. 1 is the introduction of the Borg. They are a frightening enemy because they do not embody any empathy or mercy; never hesitating to kidnap others and force them to undergo grisly operations. They operate with the sole motivation of assimilating others into their community by restricting an individual’s free will. Because of this, one of the volume’s highlights is when Spock resists the forces of the Borg. It not only provides Spock with an epic moment of heroism but also showcases the weaknesses in the seemingly invincible Borg.

I particularly enjoyed the introduction of Commander Valas. She is a complex character who must deal with opposition due to her Romulan identity. With this, I hope to see her in future GO BEYOND installments. She maintains an intriguing relationship with Kirk: she does not resist openly second-guessing his decisions. Captain Kirk’s notable characteristic as a risk-taking leader is particularly exemplified when he surrenders Endeavor to the Romulan Empire. His decision provides the narrative with some unexpected variation, contributing to the overall entertaining qualities of the work.

The decision to revisit STAR TREK BEYOND’s breakout character Jaylah provides the story with some cheerfulness and closure. The fifth issue is an entirely self-contained story. It features details on Jaylah’s backstory, showcasing Krall’s ruthlessness and contributions to some of her past’s tragic moments. The issue counters these somber moments with glimpses into Jaylah’s current life. She is depicted to be happily training at the Starfleet Academy. As a result, it is reassuring to know that a character who has witnessed so much tragedy has found her niche in the universe. 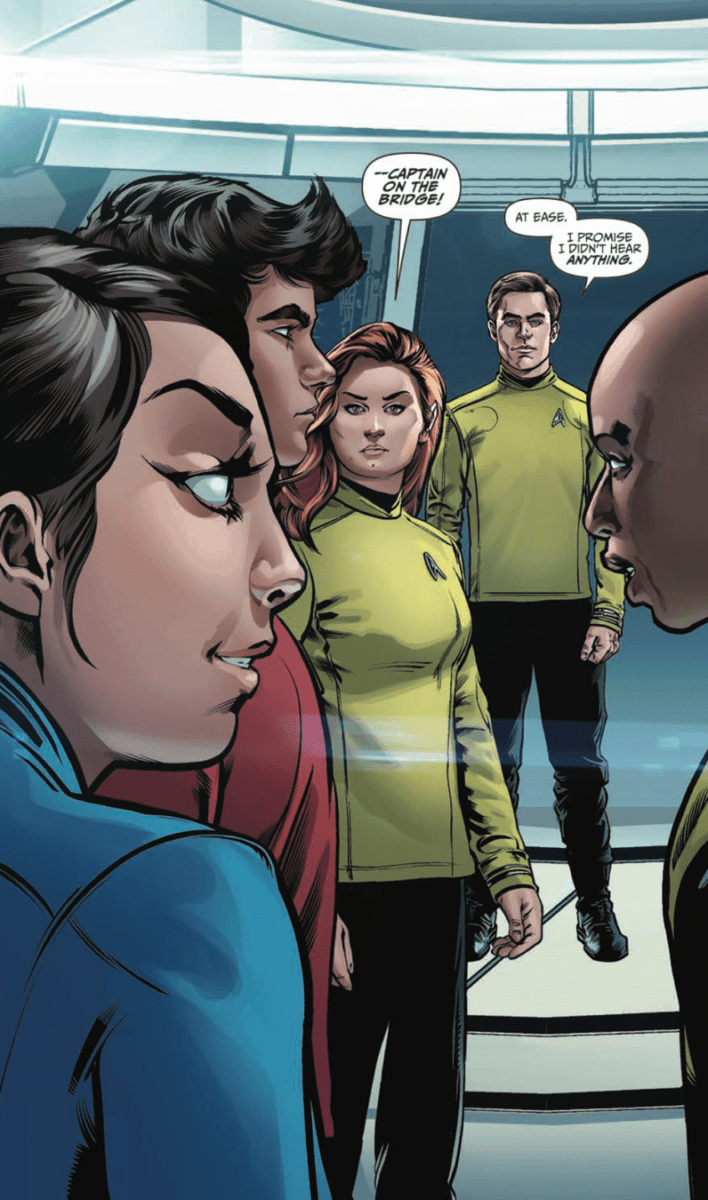 Where No One Has Gone Before

Though the graphic novel is mostly satisfying, it does have a few weak points. Most of these points lie in the sixth issue. It feels disconnected from the rest of the volume. Yes, the fifth issue maintains a self-contained story on Jaylah. However, the narrative maintains thematic elements of loss and redemption present in previous issues. On the other hand, issue six explores the phenomenon of a “white hole.” Along with this, the issue also focuses on an alleged mutiny from certain crew members. Because of these reasons, the work is different from the rest of the graphic novel. However, it is still a worthy read.

Unlike the rest of the graphic novel’s contents, the sixth issue is written by Ryan Parrott with art from Chris Mooneyham. Mooneyham’s artwork is less cohesive than that of Shasteen as Shasteen’s features bolder lines and clearer detail. Colorist Davide Mastrolonardo contributes to the first five issues of the volume. His juxtaposition in depicting the grittiness of the Borg with the humanity of Kirk’s crew makes for a realistic, though generally light, depiction of the STAR TREK world. He maintains this balance in the fifth issue when the narrative revisits Jaylah. With this, he maintains consistency in the detail of his work.

Regarding this consistency, issue six’s colorist, J.D. Mettler maintains the same results for realism and vibrancy. Therefore, the sixth issue is perhaps the most distinct of the volume. Despite this, there are elements that elevate its quality even if its illustrations and narrative may be weaker.

The first volume of STAR TREK: BOLDLY GO features a fantastic introduction to one of the most recognizable STAR TREK enemies. Though many of the featured characters are familiar to audiences, the writers provide them with engaging narratives to truly showcase their notable characteristics.

With this, newer characters such as Jaylah and Commander Valas are handled incredibly well. They maintain originality in their characterization despite being surrounded by characters who have been established for decades.

Ultimately, STAR TREK: BOLDLY GO vol. 1 maintains moments of humor, action, and boldness to contribute to a cohesive story that will leave you anticipating what is to come.