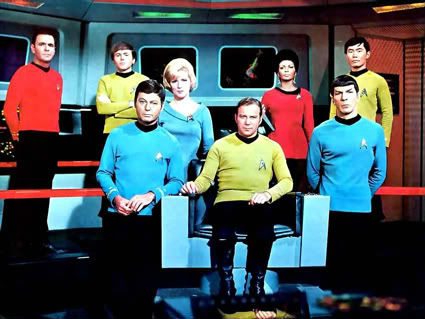 If you’re reading this, you know the words: “Space…the final frontier…” In every incarnation of STAR TREK, these words are a goose-bump-inducing sacred creed. When Gene Roddenberry first created his utopian vision of the future, he couldn’t have predicted the fifty year lifespan and the impact that the show would have on American culture. STAR TREK first aired in 1966, but was cancelled due to struggling ratings in 1969. The show would remain dormant until the 1970’s when it began airing again regularly on multiple networks during syndication. This era of syndicated reruns pulled in higher ratings than the series did when it originally aired on NBC.

Although the show’s reruns began less than a year after its cancellation, the social climate of America during STAR TREK’s return was vastly different from when the show first premiered. In 1970, the Civil Rights movement had made so many great movements forward, but the foul roots of racism were still holding firm in America’s garden. This decade saw American optimism eroded by the turmoil of the Vietnam War and Watergate Scandal. America’s moral foundation has begun to sink. The nation had conquered the moon in 1969, but it was unclear if the Earth and humanity could be saved.

STAR TREK was born at the end of America’s most aspirational years and reborn during America’s most cynical era. The series returned in time to become the hope for a generation in a tumultuous time that better days were ahead. It is this sense of optimism and progressive social understanding that has made STAR TREK the beloved series that it is today.

CLICK: Read our thoughts on the STAR TREK films with our ranking of every movie!

When reflecting on the episodes of STAR TREK’s original series, the level of moral complexity outshines even modern television. The show laid out its morality right from “Where No Man Has Gone Before,” the show’s second pilot episode. In the episode, helmsman Gary Mitchell is exposed to a strange space storm that gives him god-like telepathic and telekinetic powers. Mitchell’s slow descent into madness follows due to his expanding mental power.

The episode treats Mitchell’s affliction as a tragic accident, rather than treat him like a monster. When Kirk has to pull the literal and proverbial trigger to stop Mitchell, he does it with a heart full of regret. The episode ends with Kirk recording his captain’s log that Mitchell died “in performance of duty.” Despite being an action-packed sci-fi series, this empathic ethos is vital to STAR TREK’s success. No one is truly evil or completely good, but everyone has their own ideals and desires. Sometimes those ideals clash, but peace can only be found in the space between our beliefs. Employing violence is a tragedy, not a heroic act. 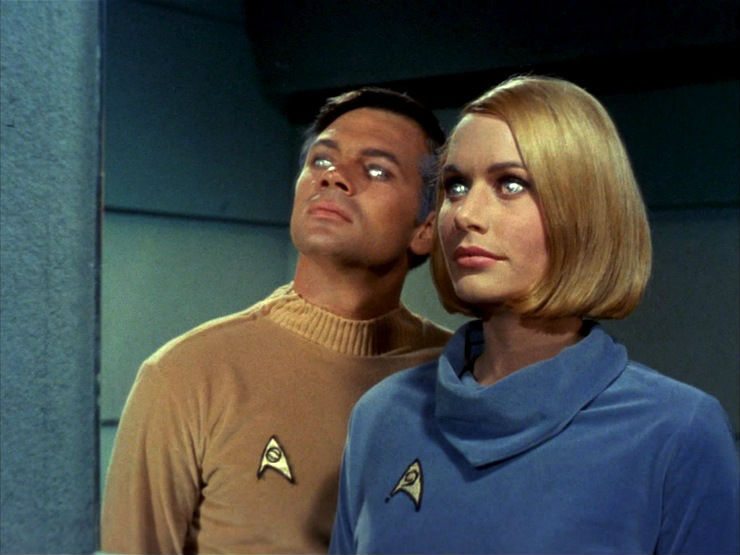 This belief in the future of humanity was beautifully represented in Gene Roddenberry’s characters. Some people who are only familiar with TREK through cultural touchstones might be surprised to watch the original episodes, and realize how little the icons of STAR TREK actually appeared in the early episodes. Characters like Kirk, Spock, and Bones were in most episodes, but characters like Sulu, Chekov, Uhura, and Scotty had much more infrequent appearances.

Television in the 1960’s didn’t work the way it does now. There were no ensemble shows that flesh out characters and build backstories through long-form storytelling. In spite of this limited screen time, these infrequent characters became vital parts of the STAR TREK mythos for fans. The reason for this is that, simply by existing, these characters suggested to the audience of the 60’s and 70’s a future that was free of racial and gender biases. Each of these characters meant something to different audience demographics. STAR TREK is the series that proves the phrase “representation matters” is more than just a set of buzzwords. Representation can have a profound positive impact on the viewing audience.

First there’s the stalwart Captain, James T. Kirk. James Kirk certainly wasn’t anything new to the world of science fiction. He was another in a long line of daring, square-jawed, white male heroes who traveled the stars seeking adventure. What set Kirk apart was his attitude towards his crew. The 60’s and 70’s were a time when men like Kirk were facing a slowly changing American society. They were no longer the sole breadwinners. The second wave of feminism emerged and encouraged women to be breadwinners and to fight for equal wages. The civil rights movement brought suppressed voices to the political forefront.

As the world shifted socially, Kirk became an example of how equality in the new world would look. He never questioned the competency of his crew based on race or gender. He frequently asks Lt. Uhura to take control of the Enterprise’s helm, for example. It seems arbitrary now, but it cannot be understated how monumental it was for a white man to treat a black woman as an equal. He was a man of action, but showed respect for life. While he was often a rule breaker, he did it in service to the greater good and for the well-being of his crew. Kirk showed the kind of leadership needed in a progressive society. 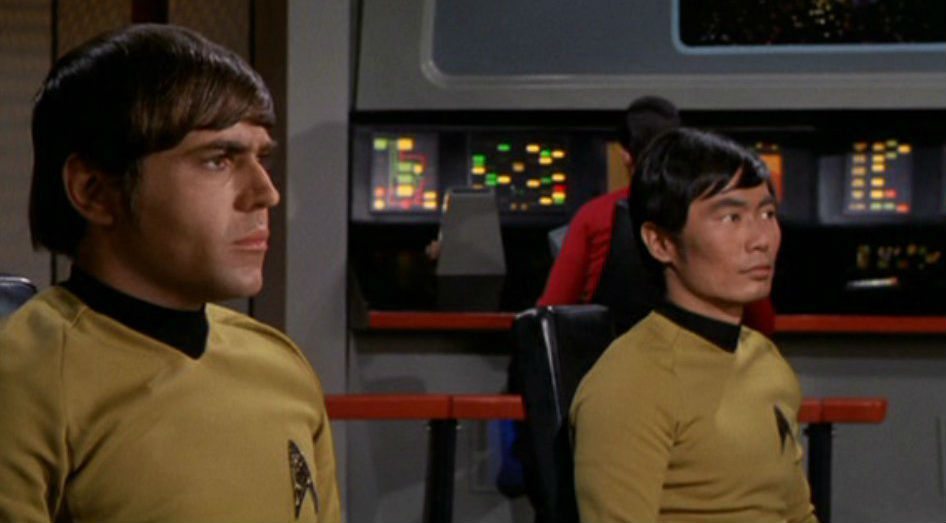 Among the crew  you had characters like Sulu and Chekov who had their own place in Roddenberry’s vision of idyllic harmony. Sulu, a Japanese man, represented an end to the tensions of the horrors of World War II (which had ended only a 20 years earlier). It’s well known that the actor who played Sulu, George Takei, had grown up in a Japanese internment camp, a symbol of America’s failure to fight bigotry in our own nation as we fought it overseas.

Sulu’s position front and center of the starship was the show’s way of showing that enemies who had wronged each other in the past could move beyond those transgressions. It’s even more appropriate, then, that Sulu frequently sat beside Chekov, a Russian, who was on the series at the height of the Cold War (the Cuban-Missile crisis had occurred only a few short years earlier).

The show’s breakout star, Mr. Spock, also had an important role to play within the series. Spock was and remains one of the most beloved characters in the STAR TREK franchise. Leonard Nimoy’s iconic performance as the pointy-eared Vulcan is one for the ages, that turned both actor and character into sci-fi legends. Even President Barack Obama was an admitted fan and penned a press release following the actor’s death.

While it is never explicitly stated in the press release, there existed a connection between Obama (and other people of mixed heritage) and Mr. Spock. Though Spock was an alien from the planet Vulcan, his mother was a human from Earth. Spock’s internal struggle throughout the series was to walk the line between the two cultures that lived within him. He grew up on Vulcan, but could never control his emotions effectively enough to completely be a part of that culture, and his appearance alone was enough to make it clear he was not of Earth.

Spock became a symbol for every biracial kid who felt they didn’t have place in this world. Leonard Nimoy even recognized this and penned a heart-warming letter to a young fan who wanted to know how Spock dealt with being bullied for his mixed race like she was. On the Enterprise, the crew accepted, respected, and loved Spock for who he was. He was proof that anyone who felt ostracized could find the home that they desired. 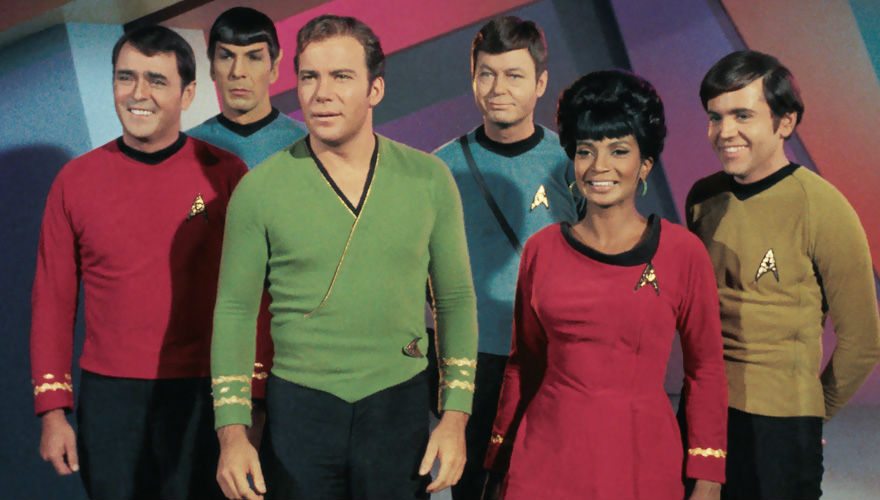 Finally, we come to Lt. Uhura. Nichelle Nichols’ character had perhaps the greatest impact for black men and women from the 60’s onward. However, her time on the show was almost cut short. In an interview with NPR, Nichols discusses how she almost left the series after the first season. Her resignation was initially not accepted by Gene Roddenberry, who begged her to reconsider before making a decision. Nichols agreed to think it over and that weekend had an encounter at an NAACP fundraiser that changed her mind. From the interview linked above:

“And that – on Saturday night, I went to an NAACP fundraiser, I believe it was, in Beverly Hills. And one of the promoters came over to me and said, Ms. Nichols, there’s someone who would like to meet you. He says he is your greatest fan. And I’m thinking a Trekker, you know. And I turn, and before I could get up, I looked across the way and there was the face of Dr. Martin Luther King smiling at me and walking toward me. And he started laughing. By the time he reached me, he said, yes, Ms. Nichols, I am your greatest fan. I am that Trekkie.”

Nichols goes on to explain that Dr. King encouraged her to remain on the series because of the amazing example she set. “For the first time, we are being seen the world over as we should be seen,” he told her. Her example ended up having a profound impact on African-Americans involved in both entertainment and the sciences. Whoopi Goldberg, who would go on to have a recurring role on STAR TREK: THE NEXT GENERATION, has cited Uhura as an inspiration. NASA even took notice of the impact the character had in the 60’s. Nichols would become a member of the board of directors of the National Space Society and gave a speech calling out NASA for its lack of female and minority astronauts. 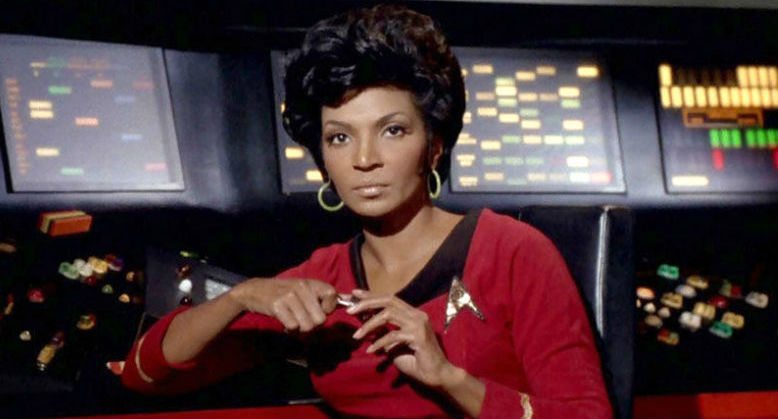 This speech gained the attention of NASA, who reached out to Nichols to become a recruiter for their next group of astronauts. Nichols agreed, and brought numerous female and people of color to NASA’s attention. One of her recruits, General Charles Bolden, would go on to become the head administrator of NASA. Nichols’ role brought her the opportunity to bring about real change into the STEM fields.

Through cancellations, reimaginings and reboots, the central idea of STAR TREK has endured: that humanity is capable of becoming something great. The show has stayed in the imaginations of the world because of its humanist belief in the world and how much we could achieve. In 2017, the United Federation of Planets will send a new crew out on a five-year mission that will hopefully extend a new message of optimism to a world wracked with uncertainty. While its message was sent fifty years ago, there’s still so much that STAR TREK can and will continue to teach us as we boldly go into the future that it promised.

This month, we celebrate that promise and how the STAR TREK franchise has carried the message of optimism from the original series across the years. Each week, we’ll look back on an aspect of STAR TREK and analyze the social issues at play in each series. STAR TREK is one of America’s great cultural institutions and deserves to be appreciated through a critical lens for what it says about our shared humanity.

How else can this celebration of Trek begin but with this message: