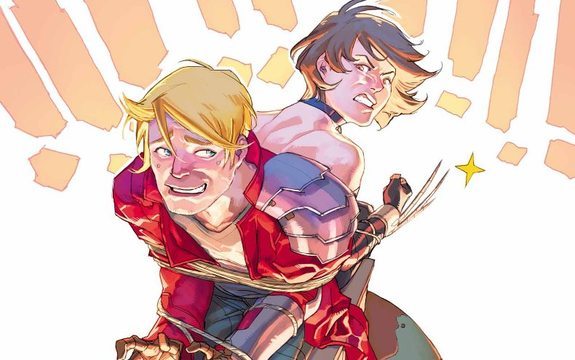 Marvel’s STAR-LORD AND KITTY PRYDE wraps up in one of the most entertaining “Secret Wars” titles – a final confrontation with Gambit the Collector, some unexpected cameos, and even more classic Hollywood homages! 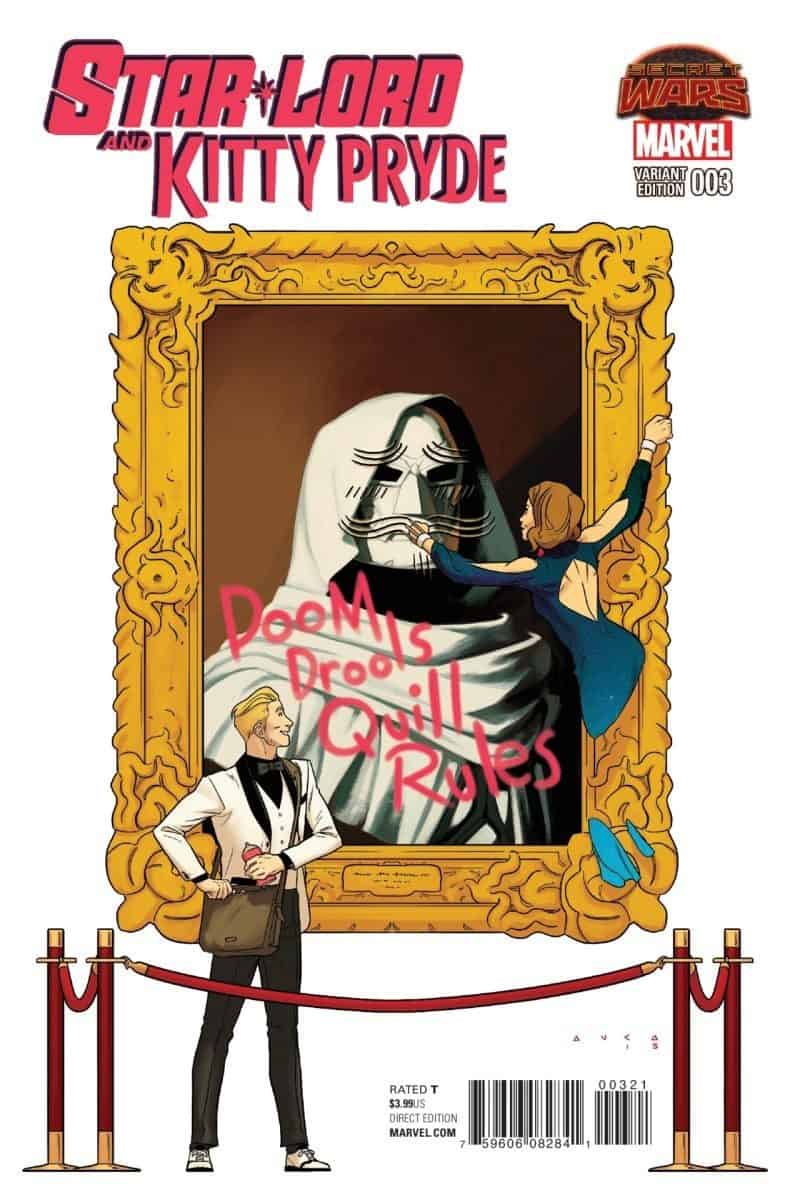 STAR-LORD AND KITTY PRYDE #3 begins with Peter and Kitty hanging upside down in the Doomenheim Museum, having been captured by Gambit The Collector at the end of the previous issue. Gambit gloats about how easy it was to fool the two into coming for the anomaly and flirts with Kitty, safe in the knowledge that her powers are nullified by the presence of Widget, a robotic analogue version of herself. Quill uses this information to his advantage as he sings Kitty’s favorite song to Widget, getting the robot on their good side leading to her freeing them. 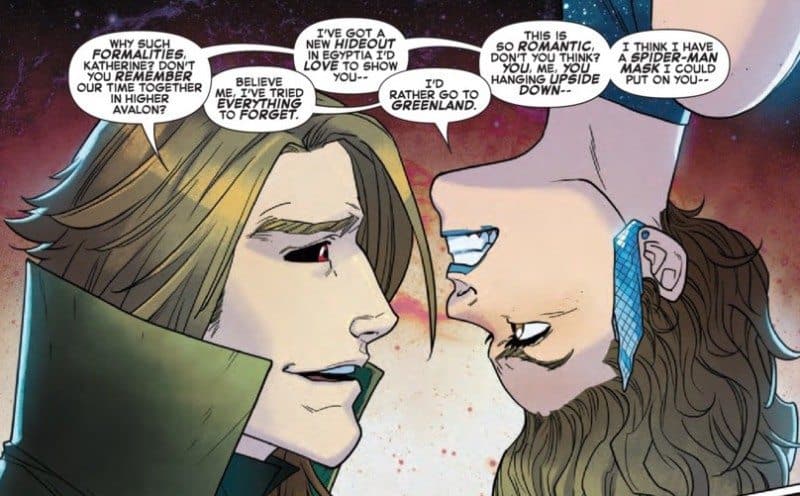 Kitty and Star-Lord begin fighting Gambit, but the three are locked in a standoff until Lord Doom himself seemingly appears – but all is not as it seems… By the end of it all, Quill has learned that the mysterious object is something very dear to him, and Peter and Kitty part with a kiss – leaving it ambiguous as to whether or not they’ll ever see one another again.  Left alone, Peter and his unexpected ally begin to discuss their future, ending with a note from CASABLANCA.

Need to catch up? Check out Brian’s review of STAR-LORD AND KITTY PRYDE #2 here.

The third issue of STAR-LORD AND KITTY PRYDE does a pretty decent job of tying up all of the plot-lines established throughout the series. We get an ending to the Gambit conflict, a very satisfactory reveal of what the anomaly is and how it fits in emotionally, and even wrap up the mini-Drax storyline started in the first issue. Obviously the main narrative thrust belongs to the Kitty/Peter relationship, and it mostly delivers. The two continue to bicker throughout the issue, but it’s more lighthearted in nature, and the big moment where Kitty kisses Peter feels earned. It will be interesting to see what, if any, impact Peter’s relationship with Battleworld/Age of Apocalypse Kitty has on the greater Marvel Universe going forward. 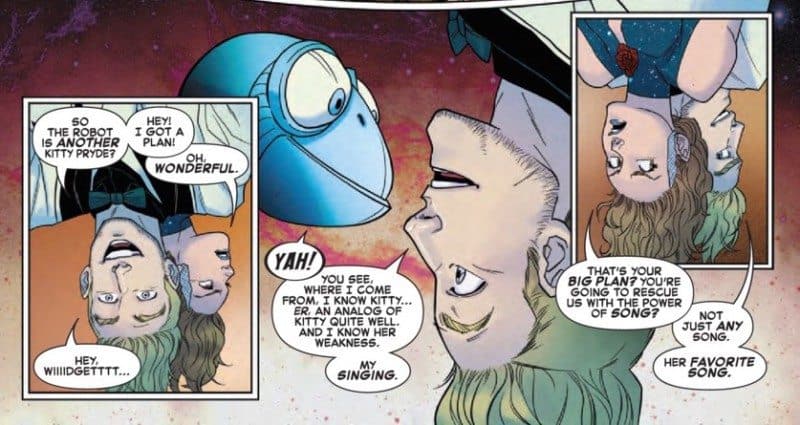 The characterization in the story continues on the same path it’s been on for the first two issue. Earth 616 Peter Quill is very much the Star-Lord seen in the Marvel Studios GUARDIANS OF THE GALAXY film, right down to his use of singing as a tool during a climactic moment. On the same token,  AOA Kitty Pryde continued to be presented much more in the vein of her 616 counterpart, to the point where I wonder why Marvel even bothered using the AOA Kitty, as opposed to establishing a new Battleworld version (for example, the Tigra analogue briefly seen, which would have been seriously entertaining).

Artistically, Firmansyah’s work continues to be one of the strongest elements of the book. The quasi-animated style still fits really well with the screwball/1940’s comedy feel. The first page of the story is particularly striking, with Kitty and Peter hanging upside down arguing about whose fault their current predicament is. The art is also augmented by the lettering, which is presented upside down for the first page. 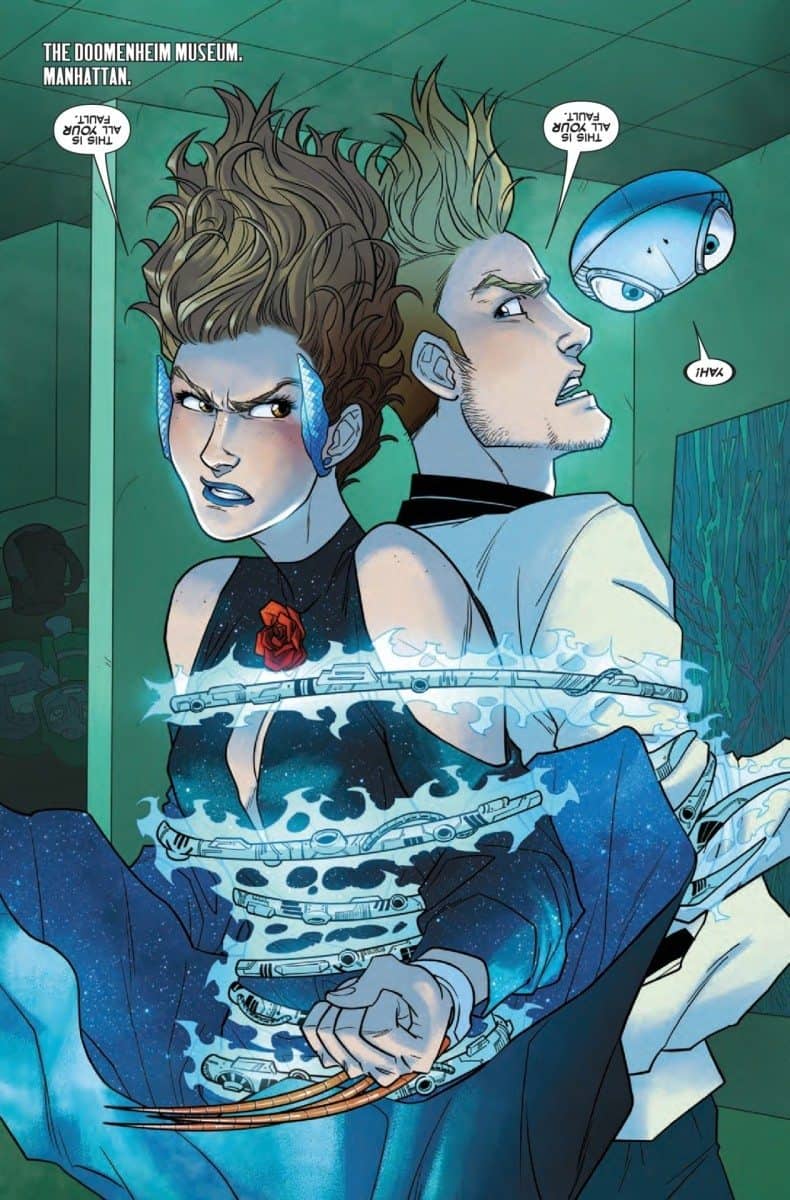 STAR-LORD AND KITTY PRYDE #3 is superb, and the series overall has been my by far favorite series to come out of Marvel’s “Secret Wars” storyline. Sam Humphries has a pitch-perfect take on the characters, and used the interesting neo-40’s setting to great advantage. The writing was perfectly complimented by Alti Firmansyah’s art, which provided an animated look to the series. I can’t recommend these three issues enough, and would gladly welcome a return of this team to whatever versions of Star-Lord and Kitty Pryde emerge from the “Secret Wars” event.

Check Out More From BRIAN!