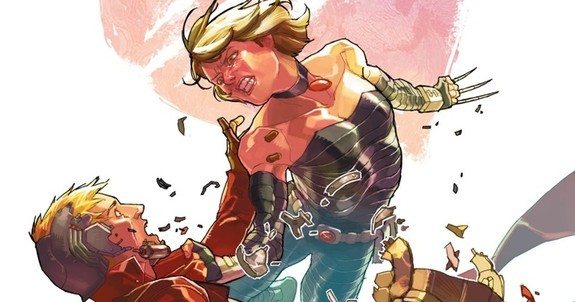 The romantic adventures of Peter Quill and a (maybe) alternate universe version of his fiancé continue in the second issue of Marvel’s STAR-LORD AND KITTY PRYDE! 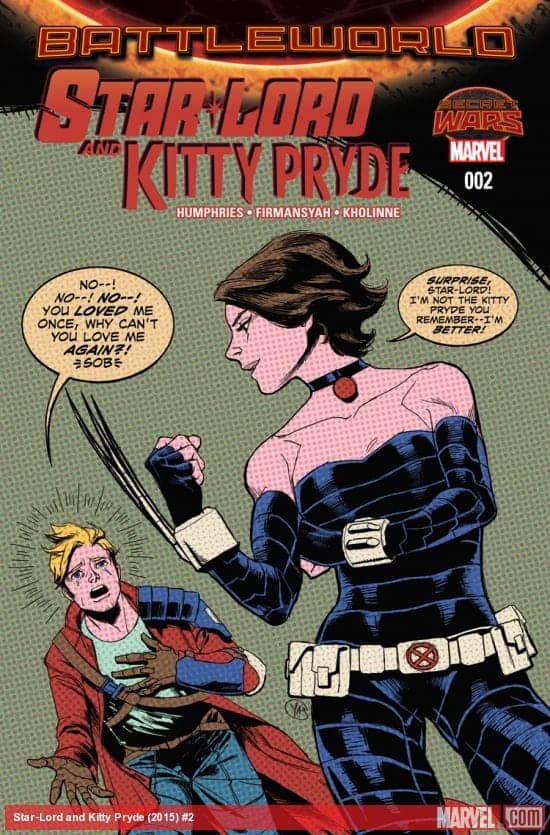 READ: CHECK OUT OUR THOUGHTS ON THE FIRST ISSUE!

The second issue of STAR-LORD AND KITTY PRYDE begins sometime after the end of last month’s, with the titular couple trapped in a pizzeria and confronted by The New Mutdroids (robot versions of the classic New Mutants lineup). Ever the efficient multitaskers, Peter and Kitty battle the robots while debating how Peter’s existence affects the Battleworld dogma of God-Doom. Even though they’re still handcuffed together (thanks to Kitty’s attempt to arrest Quill at the end of #1) they make relatively quick work of the Mutdroids, mainly due to the supposed Age Of Apocalypse (see my theory below) Kitty Pryde ruthlessly dealing with them. As the fight winds down, it’s revealed that the robo-Cypher is actually a live human being who Kitty kills, much to Peter’s dismay. The robot corpses self-destruct, blowing up the pizzeria. 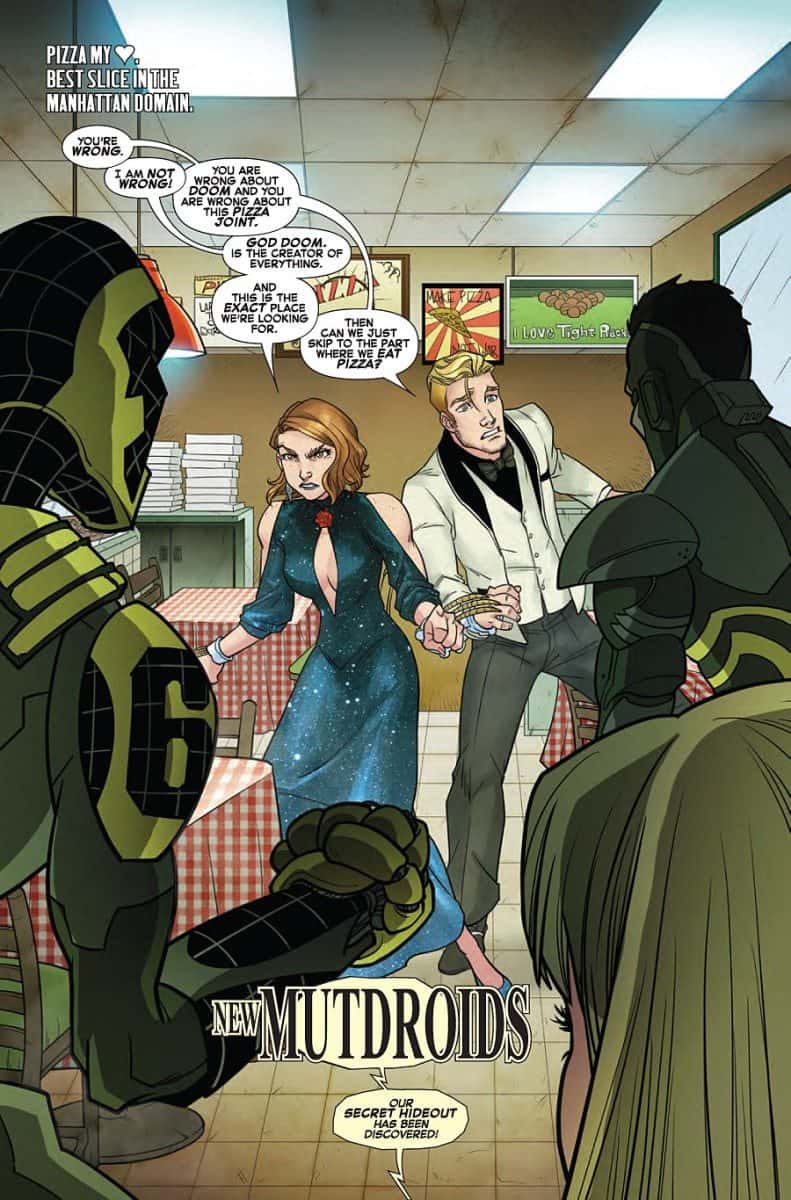 The next morning Kitty awakens in a park with Peter having broken out of the handcuffs, but not having escaped. The two alternate between rom-com/screwball angry banter and expository dialogue that sets up this version of Kitty’s supposed backstory. Kitty explains that she has to get the anomaly from Gambit the Collector (established in #1) and Quill vows to help her. The two sneak into the Doomenheim museum, only to be ambushed and captured by Gambit, who has his eyes set on another prize altogether…

STAR-LORD AND KITTY PRYDE #2 moves at a very brisk pace, as the story moves through three distinct set-pieces, but spends enough time in each to make them memorable. As opposed to the first issue, the two titular characters are together for the entirety of the book, appearing together on literally every single page. I did have one major issue with the book’s plot however, namely how much development happened off-panel between the first two issues. While I don’t mind the issue picking up an indeterminate amount of time after the first, I would have liked to see Quill explain to Kitty where he was from and the fact that he was engaged to an alternate universe version of her as opposed to just hearing about it.

While the characterization thrust of the first issue belonged to Peter Quill, the issue was devoted almost exclusively to he and Kitty as a couple. The 1940’s screwball comedy motif hinted at in issue one is exacerbated here, with the characters engaging in the type of back and forth banter typical of those films. 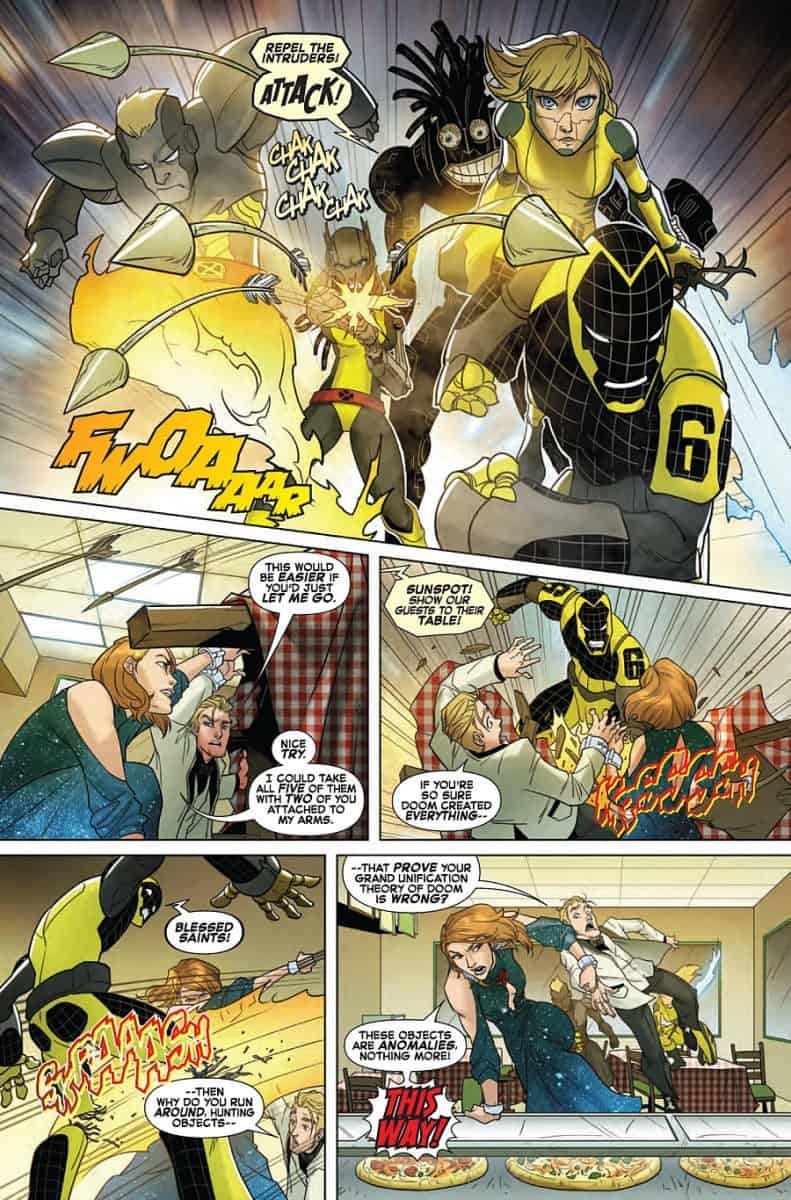 As I said above, I have a theory about the identity of the version of Kitty Pryde featured in this series. She’s presented as the “Age Of Apocalypse” version, right down to her Wolverine claws. However, I believe she’s actually going to be revealed as the traditional 616 Kitty Pryde. From an in-story standpoint, certain parts of Gambit’s dialogue at the end of the book seem to back this up. From a practical business standpoint, the relationship between Kitty and Peter has been a major building block of the Guardians of the Galaxy and X-Men properties lately and according to the creators will be going forward;  I just doubt that Marvel would allow Quill to be involved with another woman (even if it’s an alternate version of Kitty) at this time.

Artistically, the issue follows the same slightly cartoony/animated series look established in the previous issue. The highlight pages to me are the quasi-romantic scenes in the park that make up the middle of the issue. Speaking of the park, the designs of “The Union of Doom Square Park” and the “Doomenheim Museum” are spectacular Doom-ified versions of traditional New York City landmarks. 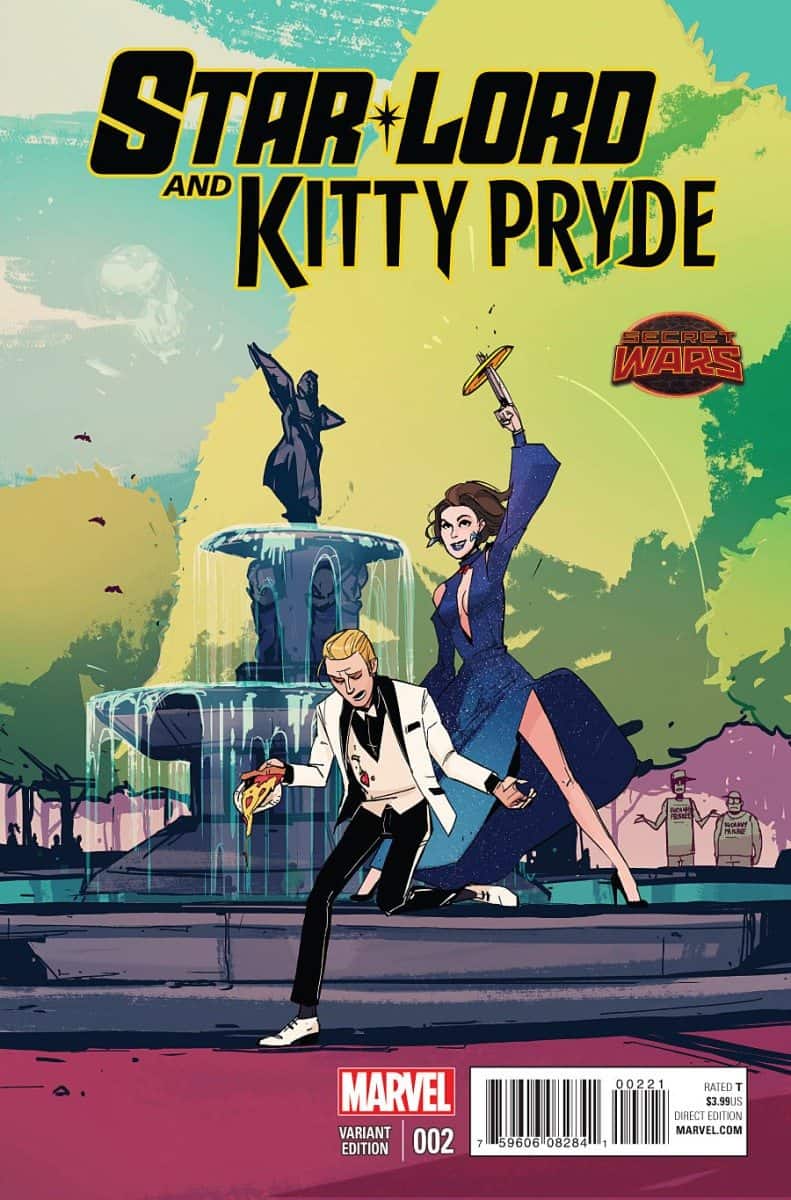 STAR-LORD AND KITTY PRYDE #2 is a really entertaining read that continues the romantic/screwball comedy vibe of the first. While there are some plotting issues, the characterization and art more than makes up for it.