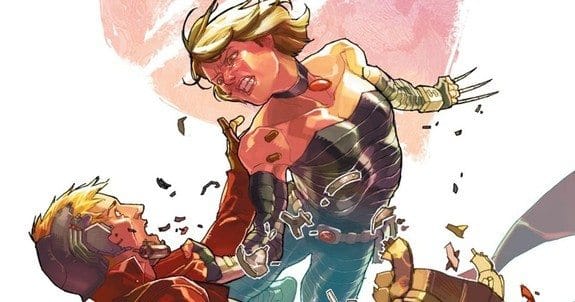 Not even God-Doom and Battleworld can tear apart Peter Quill and Kitty Pryde, as Marvel’s star-crossed (not to mention franchise-crossed) lovers return in STAR-LORD AND KITTY PRYDE #1. 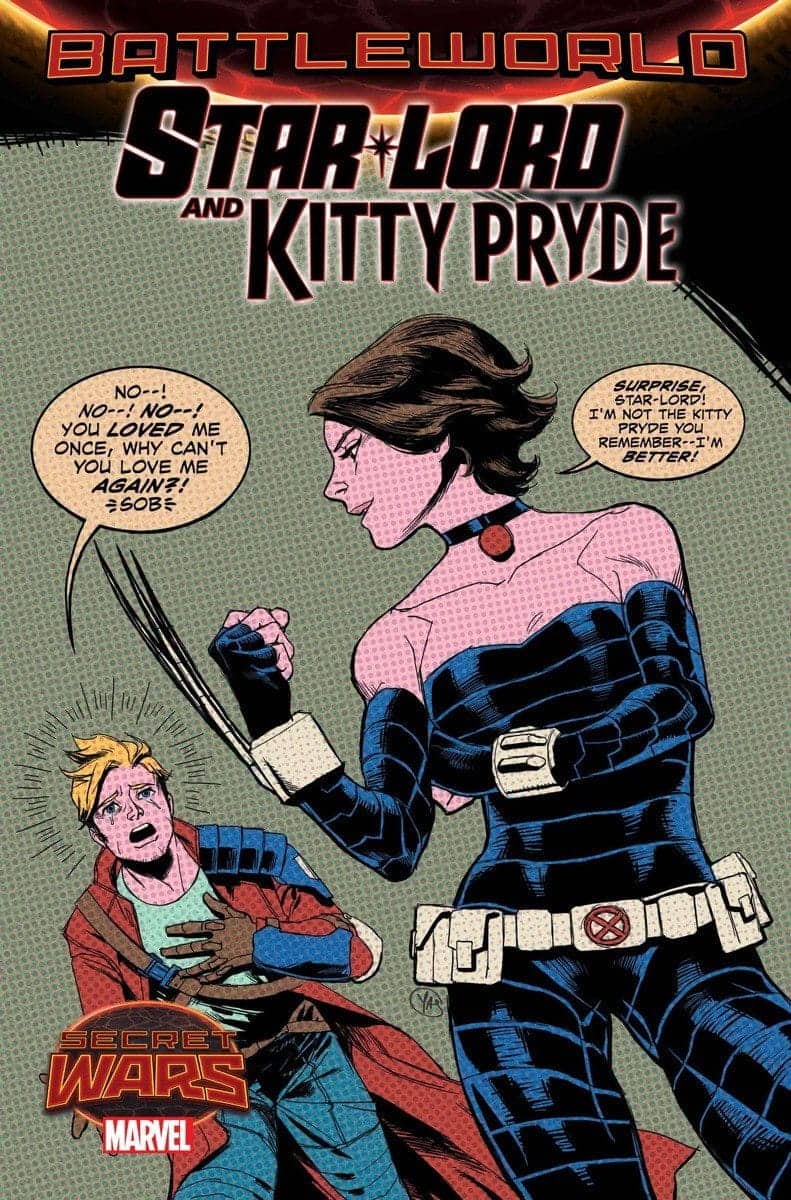 STAR-LORD AND KITTY PRYDE begins at a 1940’s themed piano bar in the Battleworld version of New York City, with Peter Quill belting out “Part of Your World” from Disney’s THE LITTLE MERMAID to an enraptured audience. We learn through his narration that Disney doesn’t exist on Battleworld, so he’s hailed as a musical genius. Said narration also serves an expository purpose, setting up Quill’s status quo. He’s the Star-Lord of the classic 616 Marvel Universe who was saved from destruction on Reed Richards life-raft and is currently being hunted by God-Doom’s forces. Going by the name Steve Rogers he’s taken up the singing gig to keep off Doom’s radar. Quill is clearly depressed at the loss of everything he loved, especially his fiancé Kitty Pryde, flatly refusing Drax’s (a pompadour-sporting club owner) advice to get involved with his groupies. 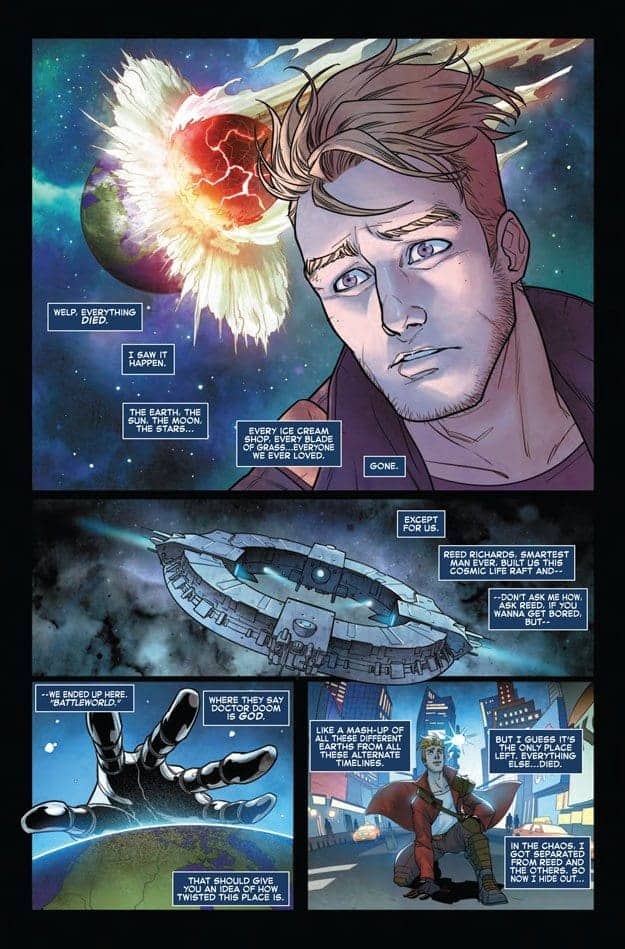 Meanwhile, this realm’s version of Kitty Pryde comes to the club as an agent of Valeria Doom for a meeting with Gambit The Collector. Quill, overcome with emotion, stops his set and confronts the two, ruining Pryde’s business deal with Gambit causing him to flee. Quill locks Pryde in a passionate kiss, but she rebuffs him as she has no idea who he is. However, an inadvertent splatter of his blood into her scanner reveals him as the anomaly she’s been hunting for all along and she handcuffs him to take to Doomgard at issue’s end…

Plot-wise, STAR-LORD AND KITTY PRYDE #1 is heavy on set-up. Being a first issue, it has to deal with the baggage of quickly explaining the Battleworld concept and how the 616 Peter Quill is alive and well in it, which can be a tiresome for anyone whose keeping track of the “Secret Wars” storyline. Once that exposition is out of the way, the issue moves at a brisk pace, quickly establishing the status quo for both title characters. For a book named after them, there’s very little actual interaction between the two, clearly saving the ‘big couple’ moments for later in the series. The last page’s developments imply that the series is going to take the two in the relationship direction of a traditional 1940’s screwball comedy film, ala’ IT HAPPENED ONE NIGHT.

Most of the character-weight of the story is carried by Peter Quill, and he’s presented as a very likable protagonist. In a move that I’m sure will fuel the “MCU is taking over” conspiracy thorists, Quill’s characterization is heavily based on Chris Pratt’s portrayal in the 2014 GUARDIANS OF THE GALAXY film, right down to the musical pop culture references. This relatively cheery demeanor masks his intense depression at the loss of everything he ever knew and loved, adding an interesting layer to the character and explaining his behavior when Kitty appears. Speaking of Miss. Pryde, the Battleworld version of her we meet here isn’t all that dissimilar from her 616 counterpart personality-wise, though she has a few adamantium additions that a certain mentor of hers would approve of (but then, she is the “Age of Apocalypse” version). Gambit and Drax provide interesting cameos, with recognizable elements of their traditional characters melded with new Battleworld iterations. 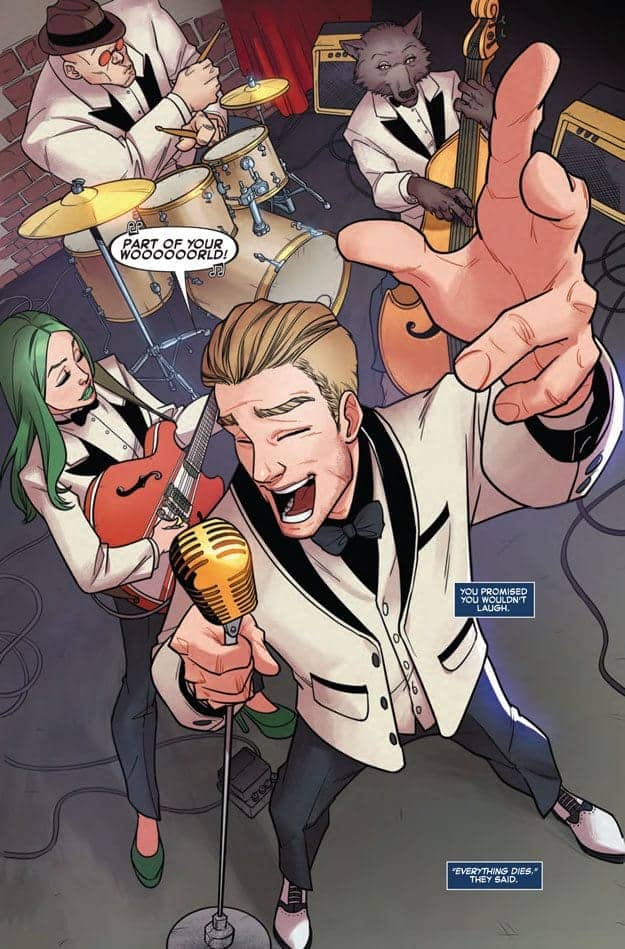 Penciller Alti Firmansyah brings a slightly cartoonish quality to the art. The figures maintain realistic proportions, but their movement is similar to realistic animation. Both Peter and Kitty have a classic movie star quality to their looks, which helps both the ’40s club setting and the overall screwball comedy feel. The artistic highlights are Quill’s performance with his band early in the issue, Kitty’s entrance, and the montage page that details their 616-universe relationship.

STAR-LORD AND KITTY PRYDE #1 is one of the best issues to come out of Marvel’s “Secret Wars” storyline so far. While it’s plot is a bit exposition heavy at the start, it eventually starts moving at a brisk pace, with very strong characters and fun art. If the darkness of most of Battleworld is bringing you down, I’d definitely recommend giving this issue a read.