Harmony occurs at that moment when two elements resonate in such a way as to form something entirely new. That new thing is more than the sum of its parts could be on their own. ALL-STAR BATMAN #8 is harmonious, and that makes it more than just a typical Batman story. That makes it mesmerizing. In ALL-STAR BATMAN #8, Scott Snyder brings back familiar elements of narration, using words as the ultimate abstraction, and creating a unique tone with the Mad Hatter, an underrated Bat-villain. Snyder’s writing meshes with Giuseppe Camuncoli’s surreal art style to express something personal, something that leads us down a rabbit hole to interrogate the relationship between Batman’s origin and the madness found in this issue.

The caped crusader’s latest road trip adventure takes him to the swamps of the Mississippi Delta. Here, he finds Jervis Tetch AKA the Mad Hatter. Upon his arrival, the mysterious strike team, seen in the previous issue, attacks Batman. They use hologram technology that disguises them as members of the Bat-family. Too bad for them since Batman knows his family, including their fighting style, better than anyone. Although the encounter has some exciting action and an inner monologue from Batman, it doesn’t compare to the mind bottling hyper trip the Mad Hatter has in store for the detective. The case of the deadly virus and the mysterious strike team that’s hounding Batman continues in “Ends of the Earth Part 3.”

WATCH: The latest episode of the Weekly Comic News Show features the latest and exclusives from DC Comics!

As Batman confronts the Hatter, he slowly slips into a hallucination. As the Hatter gets inside Bruce’s head, he makes him question the reality of his path towards heroism. The illusion suggests that the Hatter has had Bruce under his control from the very beginning, going as far as shouting “Twinkle twinkle little bat” to hypnotize Bruce into thinking he saw a bat by his windows, the symbol that caused him to don the mantle of the bat. To further cement his argument, the Hatter questions the peculiar similarities between Bruce’s life and Alice in Wonderland. For instance, the Batcave is Bruce’s personal rabbit hole. ALL-STAR BATMAN #8 also amusingly showcases how major Bat-villains intertwines with Wonderland characters, like the Cheshire Cat and the Queen and King of Hearts.

The story from the Hatter’s perspective is told through the classic nine-panel-grid used in both of Frank Miller’s seminal runs on the character (BATMAN: YEAR ONE and THE DARK KNIGHT RETURNS). This structure allows for sufficient space to depict art that is both chilling and jarring. This panel structure hearkens back to Miller’s depictions of Batman as quite insane, and the layouts create a sense of unease in the reader. 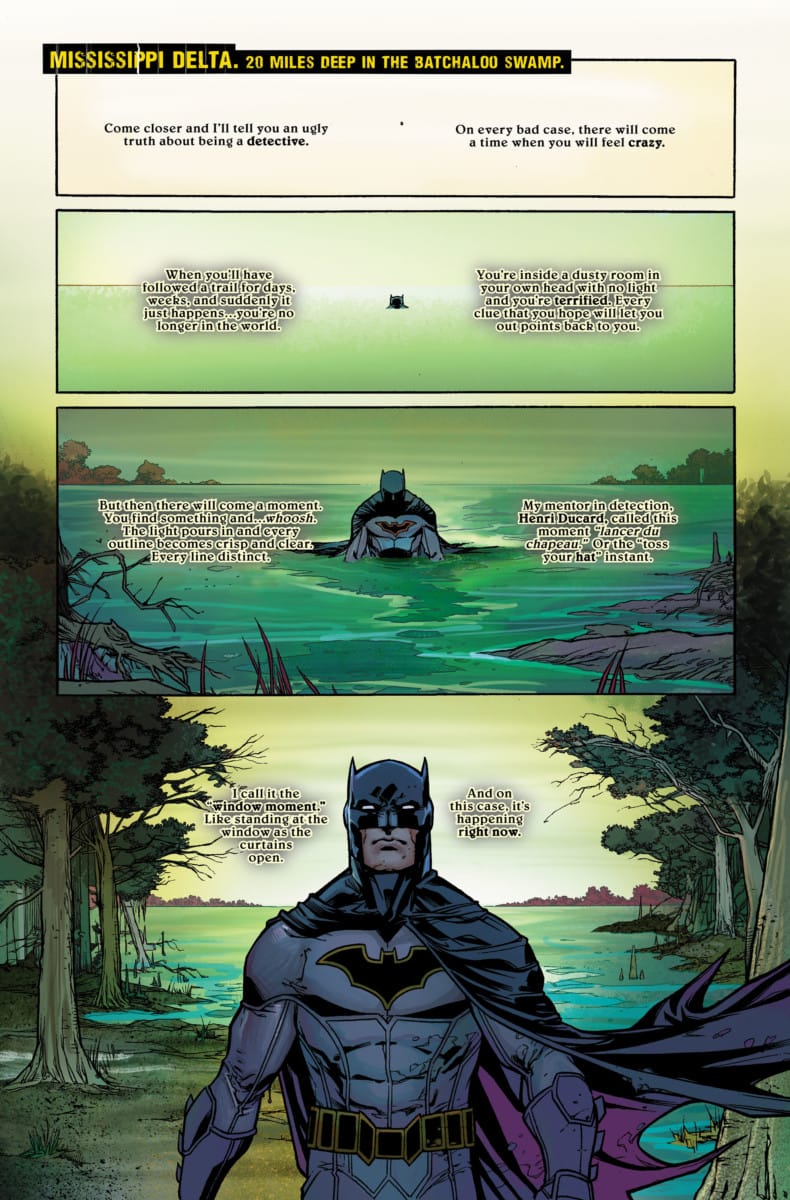 Snyder’s writing again feels refreshing, as he breaks away from traditional comic book storytelling. By ditching speech bubbles, Snyder again fills the pages with narration in black boxes —as first seen in “Ends of the Earth Part 1.” Throughout that narration, it felt as if Batman was calmly recording a memoir of his latest adventure. However, his voice suddenly changes as the words on the boxes are capitalized during Bruce’s mad experience. Thanks to the style of font, it’s easy to differentiate when Bruce is under the influence of the Hatter and when he’s not. The Mad Hatter makes Bruce question his beginnings, so for Bruce to narrate what he’s experiencing helps us ride along with him through the trippy adventure. Although not a physical threat, the Mad Hatter proves to be an intelligent foe. When Snyder utilizes him in this way, the character makes us question Batman even as he questions himself. Snyder, again, successfully elevates another underrated villain to make a standout story despite how many great Batman tales there currently are on the market.

READ: Bane brings the pain in BATMAN #18. Find out our thoughts on the issue.

While the story alone deserves a second or even a fourth reading, the art will entrance you. Camuncoli’s art style truly captivates the reader during the trip inside Bruce’s head. Camuncoli first depicts the Mad Hatter as somewhat intimidating, but after the acid trip, the Mad Hatter is almost as haunting as the Babadook—almost. There’s also a mesmerizing full page splash of Batman’s open head as he traverses through his brain while fighting popular villains. As the detective tries to get a grip on reality, Dean White’s colors further exploit the intensity of Batman’s hallucinations. Keeping the first few pages in a green tone to coincide with the swampy environment, the colors slowly give away to a purple haze as the Mad Hatter’s ghostly presence engulfs the later pages.

ALL-STAR BATMAN #8 also proves how words can become part of the art. For instance, take a look at the page below. As the Dark Knight finds himself to be strapped down, the word “NO” is stitched inside of his cape. This enhances the struggle — or even denial — depicted in Bruce’s situation. There’s a constant reminder as to how uneasy the atmosphere has become as the words hidden in the walls repeat, “It’s not real.” Thanks to the type of font and narration style established in the very beginning, we know this is Bruce talking and trying to set himself free from the illusions orchestrated by the Mad Hatter. This use of words infused with the art adds a deeper level to the storytelling. It places us in Batman’s hallucinatory experience of the Mad Hatter’s world.

ALL-STAR BATMAN #8 also goes deeper with Duke’s mini storyline, “The Curse Wheel Part 7”. While visiting Gotham’s youth center, Duke learns that he doesn’t have to try fitting into the Bat-family. He can be his own hero. However, the sudden realization is disrupted by the Riddler’s latest death puzzle as Duke encounters a figure from his past. Snyder continues to develop Duke as a standout character, going as far as putting the character in a drastic situation that only he can solve. Hopefully, the next part will portray how the character reacts to overcoming his doubts and helping Batman save the day.

ALL-STAR BATMAN #8 welcomes you to dip your toes in untouched territories. Scott Snyder’s unique and admirable take on the Mad Hatter makes the hunt for the real villain all more engaging. With an art style that captures what’s it like to be under the Mad Hatter’s spell, this is yet another Bat-story where we are not only entertained but also has us put on our thinking caps.