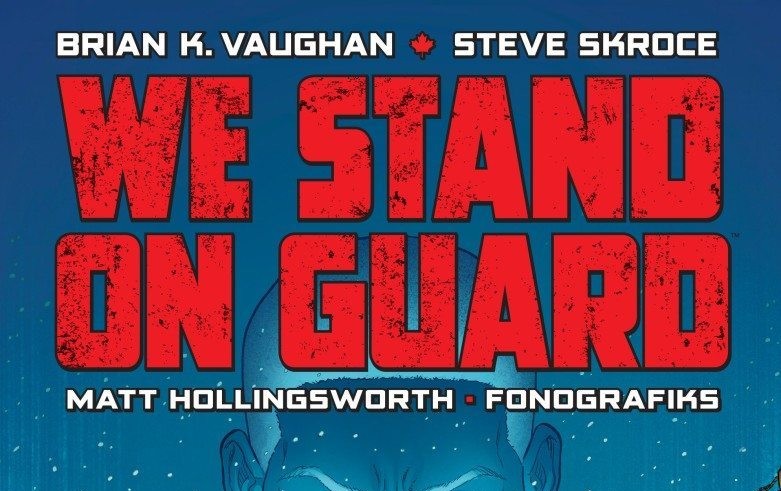 This is no filler issue, but there may not be much more steam in this engine.

The Two-Four’s chief is alive — scarred, but alive– and she learns more about Amber’s past. In Amber’s present, however, the Americans have pushed her to the brink, and she shows her true colors. But will it be enough to save the Two-Four?

READ: Catch up on our WE STAND ON GUARD coverage here!

I’m finding it really hard to keep enjoying this comic. There’s no dramatic import, no exciting momentum, no raw immediacy. It lacks the desperate pace of the first issue, let alone Vaughan’s other work. It may be unfair to compare this to SAGA, and Y: THE LAST MAN, and EX MACHINA, et cetera, et cetera, but how can you not? Even on its own, however, it just seems to recede even further into the static, passive art realm than the blood-and-guts reality it flirted with.

In fact, almost as if it knows it figuratively lacks blood and guts, WE STAND ON GUARD #5 doubles down on the literal blood and guts. The artwork is as expertly executed as ever, but the gore is rendered with an almost gleeful relish–with the blood and guts standing in stark, violent contrast to the bleak white landscapes of the Canadian battlefield. It’s appropriate for this issue, at least, as the issue is way action heavy. It does, however, reveal something compelling about Amber that was only alluded to last issue. Unfortunately, though, that revelation gets lost in the bigness of the action sequences. Even Vaughan’s propensity for killing off main characters rings hollow here, highlighting the lopsided character-plot ratio of this issue, and the trend of the last couple.

There’s something to be said about how much more lost potential hurts than flat-out badness. Had WE STAND ON GUARD stood on its own merits and come out of the gate just bad, that would be one thing. For it to start so strong, with such a pedigree, only to be an afterthought on my weekly reading list hurts me that much more. Brian K. Vaughan has generated such good will that the explosiveness of the first issue was seen as necessary, as part of the plot, and it would all pay off down the line. Now, though, WE STAND ON GUARD #1 looks like an obvious indicator of things to come: beautifully rendered violence with little else to show for it. Whatever WE STAND ON GUARD is trying to say, I’m not sure I’m hearing it, and I’m not sure I care.