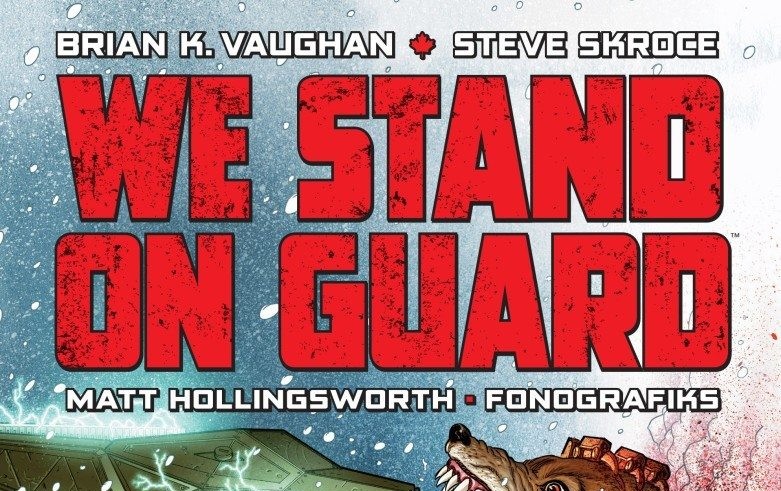 The Americans crash the Two-Four’s base!

After the the successful interrogation of the Two-Four’s leader, the Americans now have the location of the Canadian Freedom Fighters, and are coming in hot. Can the Two-Four get their act together to get out in time? Or is this their last stand? 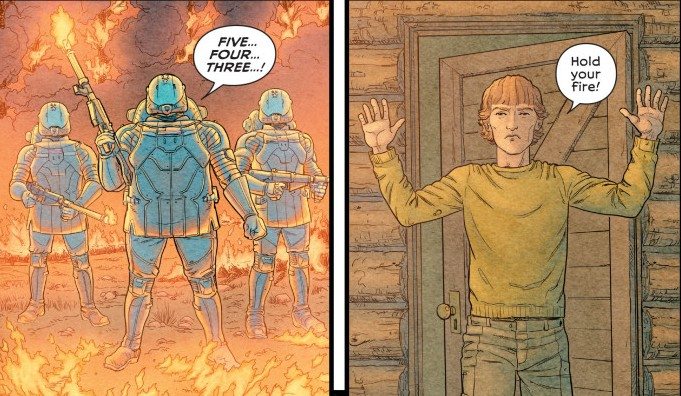 CATCH UP ON THE REST OF OUR WE STAND ON GUARD COVERAGE!

Let me get this out of the way: I’m angry at how good Matt Hollingsworth’s colors are. They are far and away the highlight of the issue–probably the series (although, especially in this issue, it’s clear that Steve Skroce is working his ass off, not to mention the rest of the team that has to ink and color and format the wildly detailed and complex panels he’s creating). The results run the gamut from subtly gorgeous to boldly devastating. Everything stands just on this side of realism (especially with the armored tech), so it all has this vaguely unbelievably yet still affecting quality to it.

The thing is though, none of those reactions are immediate. These are all the thoughts of someone who’s taken the time to look at the work and appreciate it. Is that a problem? Not necessarily, but I’m not necessarily excited by the work. I appreciate it, but almost in the way one appreciates fine art: you stare at it, go, “Ooh, ahh…” and then move on. The work in SAGA was never bad—ever–but it also had a wild quality to it, a kind of untamed necessity of purpose that makes it still visceral thirty issues later.

LIKE BRIAN K. VAUGHAN? CHECK OUT OUR REVIEW OF THE LAST ISSUE OF SAGA BEFORE IT RETURNS FROM HIATUS! 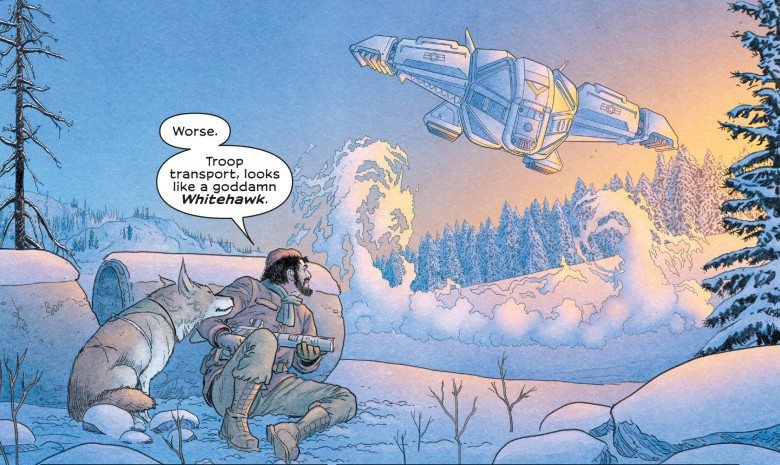 Maybe it’s all just highlighted by the fact that this issue’s a bore. Yes, we learn more about Amber, the story moves forward, and actually a big change comes to the Two-Four’s status quo. Thing is… I didn’t really find myself caring. Maybe it’s because there are also some shoehorned references to Syria and Iraq that rob the issue of its timelessness, threatening to make WE STAND ON GUARD some sort of pretentious polemic about modern times.

Don’t get me wrong: there is tremendous value in work that is immediately relevant and of the moment… but not when it’s obviously so. The string-pulling American bureaucrat is fat, white, and interested in spinning the war narrative to suit the administration’s agenda and manipulate support for the war. One of the members of the Two-Four is the granddaughter of Syrian refugees, ones who were turned away by America and allowed to enter Canada. There are great stories to tell about these issues, but WE STAND ON GUARD is not the place. The world is too far removed from ours for any immediate relevance–it all has to be thematic and subtle, allowing us to do the work. The moment you point at something and go, “look, this is what you’re supposed to get out of this” is the moment you disrespect the readership.

Maybe I’m reading too much into it. But maybe that’s not my fault. Maybe the consistently perfect art has receded into the background to let my mind wander. Pair that with an issue that just kind of goes with the motions, my mind is allowed to wander even further. This, of course, is not the end of WE STAND ON GUARD’s quality–not even close, but it needs to shake things up. I’m not even sure I care about Amber (our supposed protganist) yet, and everyone else is dying so quickly that we’re not really given a chance to like them. I’ve never thought about it before, but WE STAND ON GUARD #4 makes me wonder if this title doesn’t really have much to say or do, and is potentially just a showcase of what its team can do. They’re all some of the best in the business, and I really hope they aren’t let down.