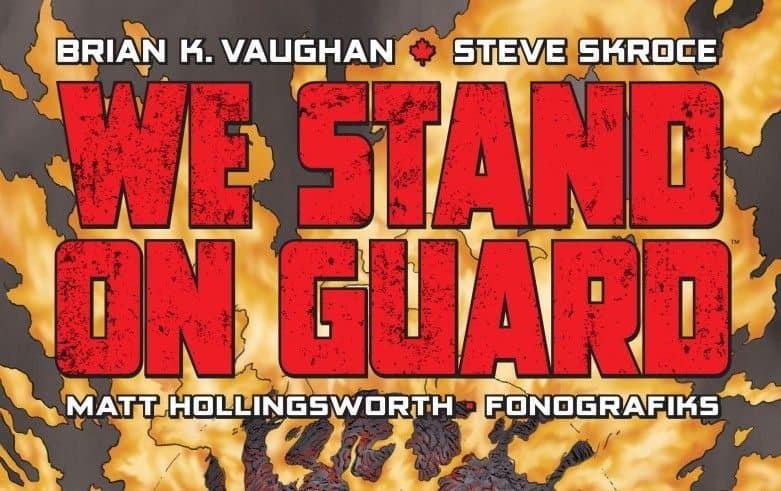 Time is running out! Should the Two-Four run, or make a stand?

After their leader gets captured by the Americans, the Two-Four is at odds over what to do next. They know the Americans’ interrogation techniques all too well, so it seems it’s only a matter of time before the Chief gives up the location of their base. Can they all come to an agreement before it’s too late?

Let me get this out of the way: the production values on WE STAND ON GUARD have been so consistently high that I’m not entirely sure they warrant mentioning. If this is the trend (which, after three issues it seems like it is), then the only thing really worth noting is if there’s ever a change in the creative staff or a steep drop-off in quality. I mean it: the entire team is so in synch that every panel, every page, every issue feels like one gorgeous and cohesive whole. There are no seams on this thing. 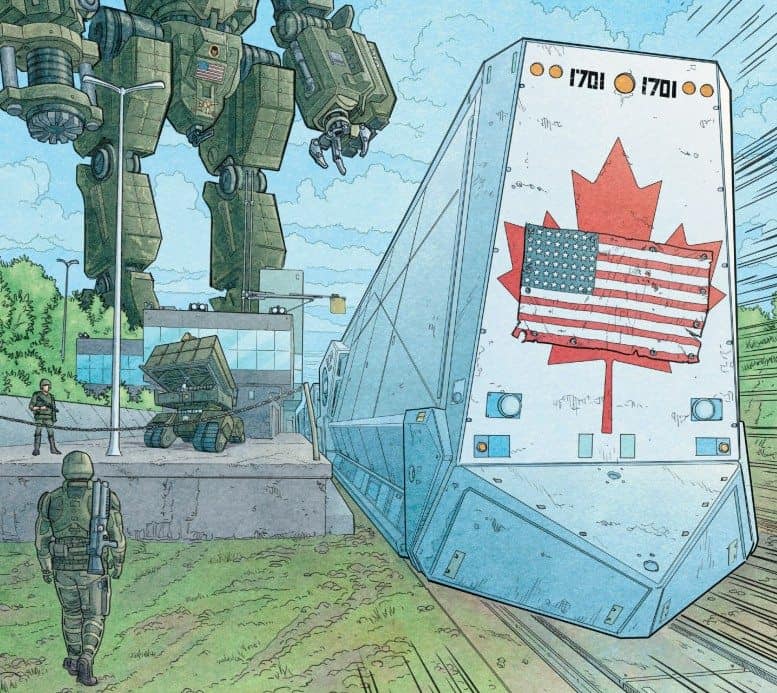 I will point this out, though: you’d be hard-pressed to find a title that makes better use of comics as a visual medium than WE STAND ON GUARD.  I would believe that Vaughan’s scripts and Skroce’s art on their own tell you a full and satisfying story on their own, so when they’re brought together, with Matt Hollingsworth’s organically perfect colors and Fonografik’s stupidly simple and therefore elegant letterings, you have an issue brimming with everything you need to live in this world.

CLICK: WANT TO REVISIT A CLASSIC? CHECK OUT OUR COMICS(IN RE)VERSE FEATURE ON SCOTT PILGRIM! 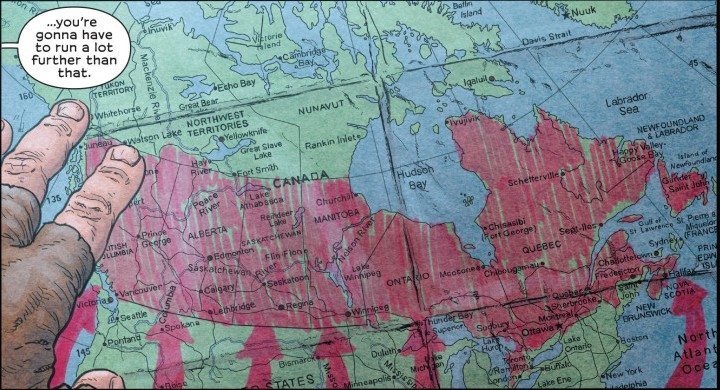 And I’m not entirely sure that’s a blessing. 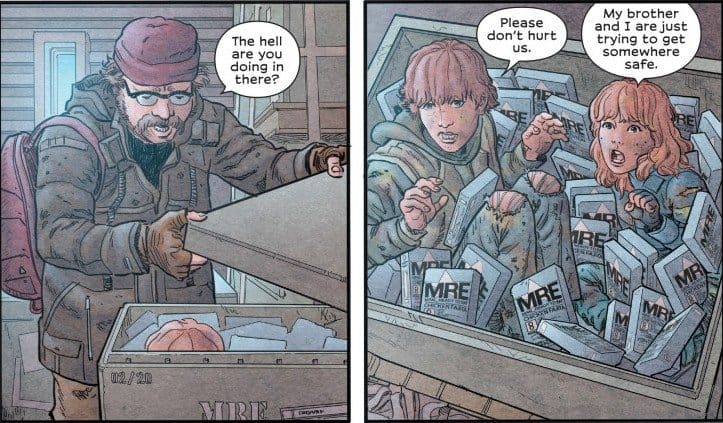 Beyond the bleak day-in day-out existence of both nine years prior to the events of the story in which Amber is a little girl running away from the war and the bleak day-in day-out existence of Amber being in the war, there’s an entire new aspect of this world that just makes things that much darker: torture. It’s as much a part of our modern conception of war as anything else, and it seems 100 years in the future it only stays that way. Worse still, it seems Americans have only gotten better at it (from a certain point of view). I won’t go into any more detail so as to preserve the dramatics of that plot line, but there’s a brilliant undercurrent of rationalization during the interrogation that is so distinctly (and upsettingly) American. 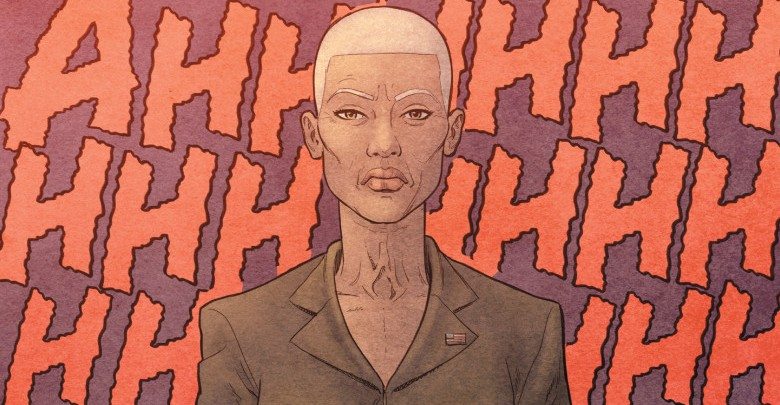 READ: YOU KNOW WHO’S NOT UPSETTINGLY AMERICAN? OUR OWN TOM BACON, AND HE’S GOT A FEATURE ON IF’S SCIENCE FICTION ANTHOLOGY RIGHT HERE!

While Chief McFadden is tortured, the Two-Four runs around like a chicken with its head cut-off: they’re split down the middle with respect to leaving their base, or staying and fighting. The decision comes down to Amber, highlighting her rapidly growing importance to the Two-Four. Their trust in her is seemingly not misplaced as the flashback reveals Amber has been whip smart and leadership material since she was young–despite her brother being older, she looks like the one that really held them together.

Torture is, in my mind, a black and white issue: you just don’t do it. That stands in further contrast to the story’s foundation: the war. Because we enter the story from the Canadian side, we view America as the aggressor. Considering the power dynamic, it’s easy to see why, and more likely than not they are, but the reality is the true cause of the war has yet to be revealed. We don’t actually know if it was Canada that fired the first shot or not, but we have to deal with the consequences of America having made up its mind.

CLICK: NO STRANGER TO TORTURE, BLACK WIDOW IS BACK IN MARVEL’S ‘TRUE BELIEVERS’ LINE. CHECK OUT OUR FEATURE HERE!

That muddying of the waters is highlighted through Amber’s flashback: the world is black and white for children, and Amber and her brother just want to get away from the war, no ifs, ands, or buts. As she gets older, as we all get older, the world becomes a little more gray, and Amber finds herself in the middle of this war, picking sides, but re-evaluating every step of the way. 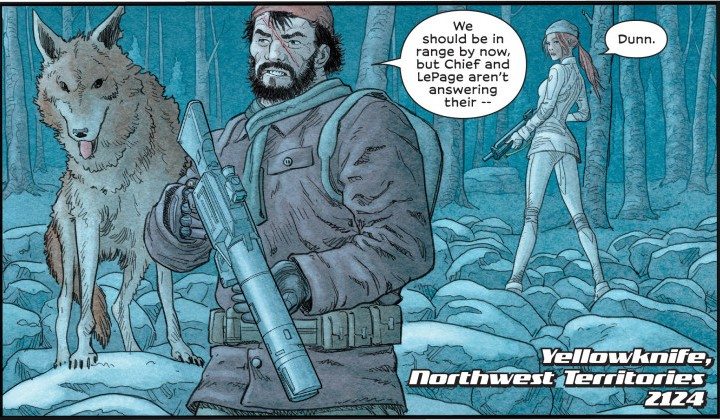 It’s Amber, however, that once again represents my one gripe with the issue: when everything in the comic is so unflinchingly real (down to the affecting facial expressions), Amber’s typical “comic book” attractiveness stands out. Her body type reinforces the status quo of what women in comics look like, and, to me, it’s distracting–especially when she stands in contrast to the dirty, grungy world of the Two-Four in her skintight, pure white bodysuit and her pink hair. All the women, for that matter, have similar body types, while the men run the gamut. When the rest of the issue almost makes you forget the medium and just absorb the story, the physical status quo strikes a discordant note.

That’s the struggle of creating something that so nearly approaches perfection: any misstep is noticeable. The standards at which you’re judged are now that much higher. For the most part, WE STAND ON GUARD #3 is the latest step into the future of the medium, but it’s slowed by some irksome adherence to the past.