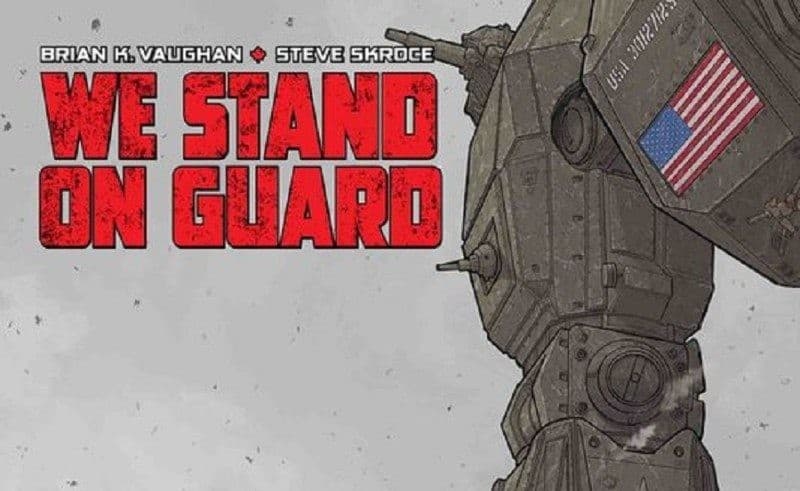 WE STAND ON GUARD opens with a Canadian family debating who’s responsible for a recent attack on the United States of America. In a jaw-dropping splash page, we learn that, at the very least, the US believes Canada responsible.

Fast-forward 12 years: Canada is war-torn, and the survivors are trying to cobble together a life (and resistance), beneath the (literally) iron fists of America. One of those survivors? The youngest member of that aforementioned family, Amber: on her own, cold, and in search of her brother. She hooks up with Canadian freedom fighters, and the story is off and running.

Vaughan’s world-building talent is immediately on display, as every page is chock-full of information to tell you what’s going on, who’s who, and what’s what. That is, of course, not all Vaughan’s doing: as with Fiona Staples on SAGA, Steve Skroce’s art seamlessly weaves its way through Vaughan’s story, amplifying it in ways both subtle and bold. The writing is so strong that Skroce has many opportunities to just work: there’s an action sequence that’s several pages long without a single word written or spoken, there are reaction panels, there are establishing shots–all these panels are allowed to play out–and every single panel works. It bespeaks the confidence of the team, and the strength of their collaboration. It can sometimes be easy to read the typical hierarchy of comics creation: writers and artists, then inkers, colorists, letterers, in roughly that order from “most important” to “least.” That’s not the case with WE STAND ON GUARD. Everyone trusts everyone, and the collaboration is seamless.

The coloring by Matt Hollingsworth is essentially perfect. Hollingsworth has a command of tone that let’s you feel each and every panel: when it’s warm it’s warm, when it’s cold it’s cold, and everything in between. Letterers have to be the unsung hero of comic books. You don’t really appreciate the importance of lettering until you see really bad ones, or really good ones. Fonografik’s work on WE STAND is the latter in this case: it’s just neat, clean, and inviting. They’re actually enjoyable to read. A good font can make or break a novel, right? I contend the same can be said for comics! 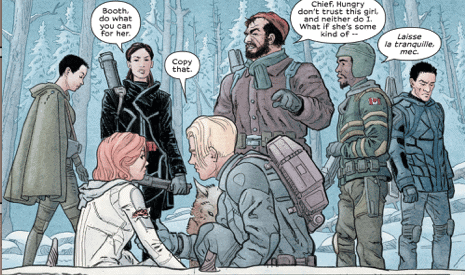 In once again Vaughan fashion we get a personal story in the midst of nigh-unbelievable stakes. After one issue it’s already compelling, though there is a flaw: there isn’t much—yet—to Amber. What we learn about her is through what happens to her, what she does, and how she reacts to everything else. We don’t yet know much about her or about what she’s like. This wouldn’t be that big a deal in the first issue if the fighters she met didn’t define themselves a bit more sharply in decidedly less time. 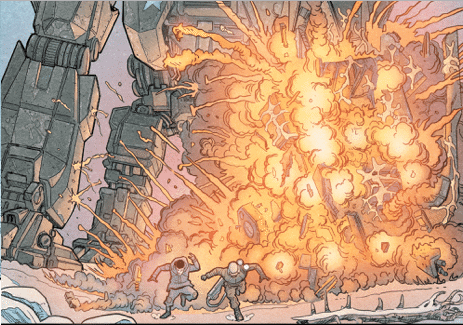 Again, this is just the first issue. Even if it wasn’t as excellent as it is, Vaughan’s generated enough good will to be given a bit more time to round things out. Regardless, WE STAND ON GUARD is off to an explosive start in both literal and figurative fashion. At this point I don’t think there’s any doubt about Vaughan’s talent, but WE STAND is yet another showcase for his collaborative ability: he’s only as good as his team, and his team is good.