Heavy hitter and father to many comic book heroes Stan Lee celebrates his 93rd birthday yesterday. From following behind the footsteps of Joe Simon and Jack Kirby at Marvel to creating a vast majority of superheroes during the Bronze Age to inspiring thousands of writers and artists out there, Lee’s innovation has resonated throughout the modern-day comic book world.

The first characters he created in the Marvel universe ended up being The Destroyer in 1941 and the Fantastic Four years to follow, but luckily they weren’t the last. He came up with many more successful superheroes, villains, supporting characters and storylines soon after. As we know, Lee loves to be a part of the action in his comics too, making cameos in many, many, MANY Marvel films and television shows. Here’s a list of my top 10 Stan Lee cameos throughout the years. “EXCELSIOR!”

“Hold the mustard!” That’s Stan Lee serving up hotdogs! Everyone on the beach, Stan included, is shocked to see Senator Kelly wash up on shore, but don’t be too shocked seeing this as my #10! I think this is a great cameo and adds some humor to lighten the scene up after Senator Kelly escapes Magneto in the film. 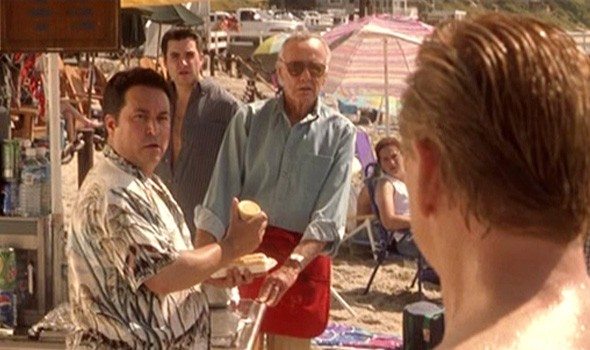 This scene could’ve ended up bad if Lee started raging soon after drinking out of one of these bottles but the great thing about this cameo is we were all hoping a sip of Bruce Banner’s blood could turn Lee into the Hulk himself! The hopes in this featured scene seemed too high, but it’s great to see he survived the gamma sickness.  Outside the movie, though, Stan Lee plans to live for a very, very long time.

You’d think creating the characters starring in the movie is enough to get you on the guest list, right? In this film, we watch Stan Lee try to prove that he is indeed, Stan Lee, to attend Reed Richards’ and Sue Storm’s wedding. I think this is hilarious to watch since, as I mentioned, the Fantastic Four are some of the first characters created by himself and Jack Kirby. I like that this is a more personalized and direct cameo for the creator.  “I should be on that list!”- that you should, Stan.

We don’t get a “with great power comes great responsibility” sort of line from Lee, but he shares some kind, motivating words to Peter in this brief scene. SPIDER-MAN 3 is definitely not the best one out of the three featuring Tobey Maguire, and well, there aren’t a lot of high notes in the film either. But as we all know, Peter Parker isn’t himself after a meteorite crashes in Central Park, and an alien entity attaches itself to Parker. The whole movie is a constant battle, fighting off evil in his conscious, but words like “I guess one person can make a difference” are inspiring enough to let some good back in. This exchange seemed like top 10 material to me.  I just wish these were words that could have made this film a hell of a lot better. “Enough said.”

Fans may know Tony Stark to be quite the ladies’ man, but he may have some competition with Lee in this cameo. Stark mistakes Lee in the film for being infamous playboy Hugh Hefner at the red carpet in this scene. Hefner and Lee both found success in their careers in the same era and are respectable for their creativity within the media over the years. I love seeing Stan Lee really get into character for many of his cameos, especially this one. Check out that sweet robe he’s styling in. 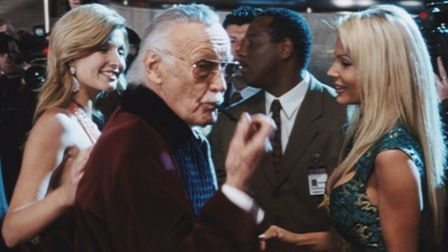 Lee may have had many professions in his lifetime, from writing obituaries to drafting training film scripts during World War II, but from what this scene can demonstrate, being a librarian wouldn’t be the smartest career choice. Lee casually scans and sorts books in this library during a gruesome fight between Spider-Man and the Lizard. I love the irony of his role in this scene- Lee never misses the action in his comics. 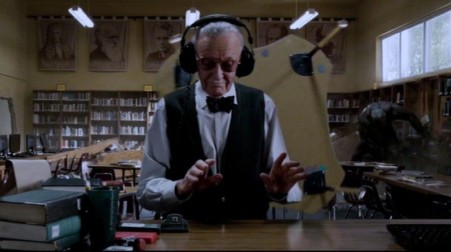 Viewers may have not caught this cameo, but it’s one of the more hilarious ones he’s done. Stan is a judge for a beauty pageant in Chattanooga. While Tony Stark slinks into a news van outside the pageant, Stan Lee is taking an interest as a guest judge for this local event. I like that contrasting from other cameos he’s done with more career-oriented characters, this one is ridiculous and strictly for laughs. 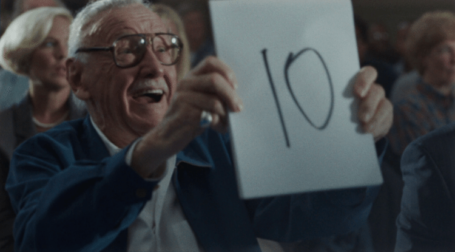 READ: Take a look at our review for Marvel character Devil Dinosaur in the first issue of MOON GIRL AND DEVIL DINOSAUR!

This is a non-Marvel movie, but Stan Lee makes one of his longer cameos in this film, giving advice to Brody and explaining the intersectionality of his relationships with characters he’s created over the years. Lee tells Brody a short anecdotal tale regarding a past relationship at a time he was creating comics, and how he’s put traits of himself into his own characters (Dr. Doom, The Thing, The Hulk). Even though we later find out that a friend, T.S., pays off Lee to build up self-confidence in Brody with such a story, it’s a sweet, endearing moment shared by the two in this film. I listed this as #3 because it’s an honest take on relatable themes such as romance in this one-on-one, but his tale can be applied to other themes in life that come along. Many of us can find a time we’ve been too involved in certain aspects of our life and not balancing out other priorities at hand. 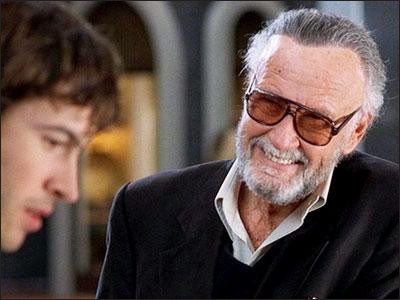 Stan Lee really loves getting into his characters- this cameo is the first time he plays the role of one of his own characters, Willie Lumpkin. Lumpkin made his debut in comics during the 1960’s, but this was the first time he’s made an appearance in films. There’s something to be said about art mimicking life, and this cameo definitely gets my stamp of approval for the #2 spot. 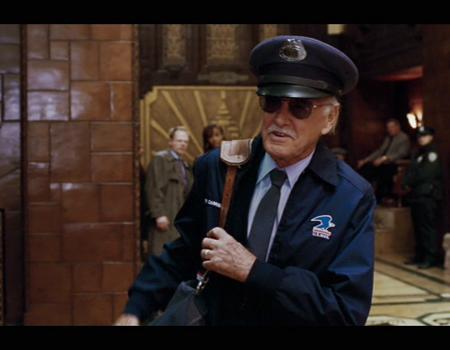 Finally, numero uno- because you can’t “fight a war without a uniform”. I’ve listed a lot of great cameos in this list, but none really caught my attention or got me stoked like in the WINTER SOLDIER. The film follows up with Steve Rogers having trouble adjusting to modern-day living in comparison to the American life he was used to. Through the emotional and physical obstacles during the first half of the film, we watch Rogers really question the values he cherishes, his loyalty to the US of A, and an unfamiliar sense of self -doubt. That’s not the Steve Rogers America learned to love and grow with during his rise as a hero in his timeline.

Through it all, Rogers really comes back with a healthy conscience, ready to go against the Winter Soldier. All he has to do now is suit-up, and what better time is there in a film for the lively Stan Lee to come in than now? The reason why this is #1 is for that reason- even though this cameo is short and sweet, and well, may have cost Stan Lee a job as a security guard, it transitions the build-up we have for the second half of the film, filled with action and hope. These are the kinds of things comics are built right off of; great storyline, immense character development, vibrancy and liveliness within the theme, plus hope for these characters we’ve dedicated our time to. Personally, Rogers is one of my favorite characters of all time, staying true to his values and showing great merit through thick and thin. That’s why even though guarding relics like Captain America’s uniform may not be the best career choice for Stan, it’s the most successful cameo throughout all the movies he’s appeared in.

After many years of great comic books, stories, and characters that have resonated with us readers and movie-goers over time, Lee and Marvel have been able to flourish in the comic book and entertainment world. These and other cameos have stayed true to the stories and the fans, personalized by Lee himself in every appearance. His immense dedication to his art and transitioning with the generations is astounding, like Lee and the caliber of his work throughout time.

Here’s to you, Stan Lee.