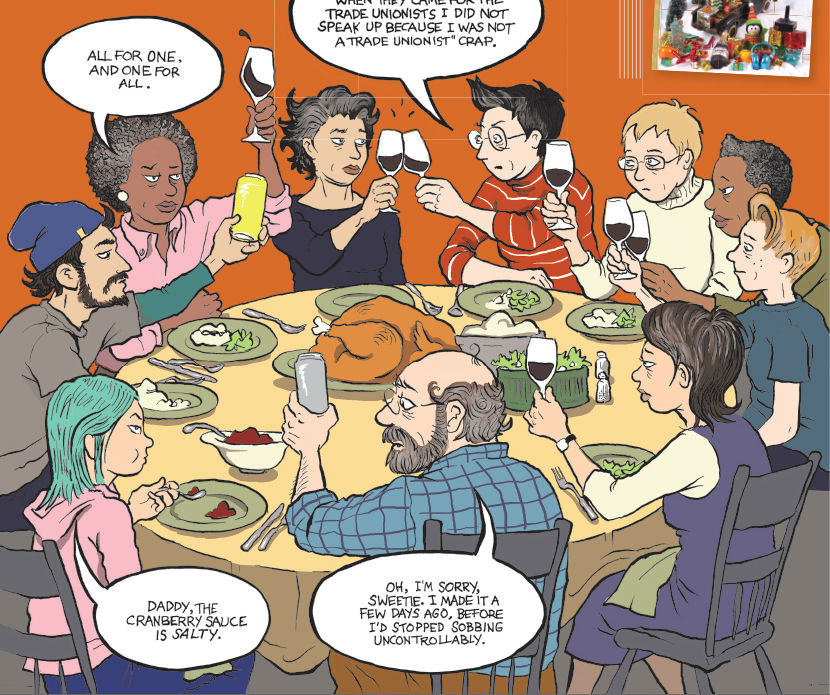 “You never really understand a person until you consider things from his point of view… Until you climb into his skin and walk around in it.” These are words proclaimed by the character of Atticus Finch in the book, To Kill a Mockingbird. He says this to inspire his children to not judge others as quickly. To open their hearts to others that they might not fully understand. In this story, it was essential for the kids to understand both the recluse of the town as well as the man who their father was defending in court. How both of those gentlemen did not deserve the prejudgement society had given them and, by understanding their situations, they could better sympathize and humanize these individuals. Kind of funny this idea presented by the revered lawyer of Alabama is a key ability of one Squirrel Girl.

It’s a long-running joke within the Marvel universe that Doreen Green is the most powerful superhero. Well, if we’re speaking on a purely power-based level, she’s not exactly breaking any ground. Her squirrel-based powers involve super strength and agility with both claws and a tail. These abilities might be that of a gag character, only existing for humor purposes. Yet as time wore on, the gag that she remains the only undefeated hero started to take on a whole new meaning.

While she might lack physical intimidation, she’s extremely powerful in at least one department: heart. Corny lines aside, her powers of understanding are quite impressive. She single-handedly dissuaded Galactus from devouring Earth. Doreen befriends the villain and tells him of a planet that’s even better for him than Earth. Instead of bashing his head in for the victory, she learned the root problem and solved it civilly. This type of problem-solving often goes unnoticed by creators of youth programming. They gloss over it in favor of other lessons, forgetting how crucial this lesson is.

READ: Our reaction to Doreen Green’s solo debut is right at your fingertips!

Why Does Squirrel Girl’s Compassion Matter?

Superhero comics often present morality as black and white. There’s good, and there’s the opposite of good, and that’s that. This often polarizing presentation prevents the readers from understanding why bad guys do what they do. I remember when I was younger I found the villains in my favorite cartoons irredeemable for actions I didn’t quite understand. The story told me they were bad, so I simply believed it.

This even applied to stories my parents would have on in the news. I’d see photos of people who got arrested for various charges, thinking they received the correct punishment for their actions. Little did I know about racial profiling, poverty, and other extraneous reasons for why people found themselves in the “bad” category. For me, this is why THE UNBEATABLE SQUIRREL GIRL matters. Nothing exists in a vacuum, and I think it’s vital for people, especially children, to learn that.

Kids media doesn’t need a moral edge. They don’t always need a reminder over and over that sharing is good, and lying is wrong. Yet when youth media does include morality, it can present otherwise challenging issues in a way the audience can understand. SESAME STREET did this when they taught kids about death. They showed how confusing it is when someone close to them dies, yet how important it is for them to know that just because someone’s gone doesn’t mean you cannot still love their memory.

WATCH: Our interview with Erica Henderson, artist for UNBEATABLE SQUIRREL GIRL, shows just what a kick this character is!

With UNBEATABLE SQUIRREL GIRL, the morals come in understanding her enemies. That is often how she defeats them. She saw Brain Drain’s technology forced him to be evil, and thus merely had to change the programming to a more modern one. In a way, it’s as though his initial environment was what caused his villainous actions, something he had no control over. She could have defeated Brain Drain like the Fantastic Four would have; beating him to a pulp before throwing him in jail. Yet if she did, Brain Drain wouldn’t have enrolled in her college, which let him take computer science classes and essentially integrate within society. Her actions had consequences; fortunately, she knew enough to isolate the problem instead of merely acting on impulse.

Another villain with a sympathetic plight in THE UNBEATABLE SQUIRREL GIRL is Mole Man. Mole Man’s frustration with her is due to her earlier suggestion to Kraven, which lead to him tampering with Mole Man’s home. When she told Kraven to hunt undersea leviathans, he went a step further and started hunting Mole Man’s subjects in his underground kingdom. If Captain Planet taught us anything, it’s that destroying people’s natural habitats leads to disastrous consequences. Historically people’s homes that were destroyed due to colonization or natural disasters lack the ability to retaliate. They tended to have less power compared to their colonizing or diaster-filled counterparts. Fortunately for Mole Man, his powers let him express his frustration with his situation and attempt to get revenge for his lost home.

It’s important to note Doreen apologized for her role in the destruction of Mole Man’s habitat. When he confronted her about his situation, she made no pretense that she “had to do it.” Everyone’s actions have consequences, and despite her title as a hero, sometimes they make mistakes. It’s part of being human. Her morality aided her in seeing where she went wrong and gave Mole Man the sympathy he needed. It takes a big person to admit they did something worth apologizing for, and a bigger person to go ahead and say they’re sorry and try to make amends for it.

No True Good or Evil

People do not act evil out of malice or spite. They do it because that is the only way they know how to act, or they feel powerless in their situation. When someone lent them a compassionate ear, they were willing to listen and change their lives for the better. It’s hard sometimes to see beyond what we want to see. It’s a lot easier to just think that kid in gym class picks on you because they’re a bad person, instead of seeing that there might be a reason behind the way they act. Being compassionate towards other people’s situations is extremely difficult for anyone of all ages, but it’s a vital skill we as a people should get better at doing. Then, we become truly unbeatable.