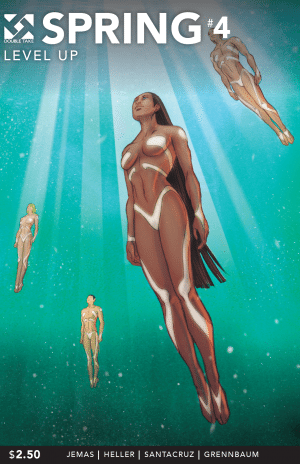 Double Take Comics has launched the fourth stage of their shared universe based around the classic film NIGHT OF THE LIVING DEAD. While most of the company’s titles have revolved around zombies in one fashion or another, SPRING has taken a different, trippy approach. The book follows a group of people who disappear while spending time at Lake Mitena. The fourth issue, from writers Bill Jemas and Young Heller and Charlotte Greenbaum with art from Heller and Derlis Santacruz, ups the psychedelic ante even further.

READ: Catch up on previous issues of SPRING here.

SPRING #4 begins with a quick recap/introduction and then a page on the history of the space program similar to the pop cultural timelines featured in other Double Take books. The story proper begins with Holiday Martinez on the bridge of the Demeter spaceship. As background visuals recap what’s going on under the lake, the crew of the ship explains to Holiday that they and she are made solely of energy. Their physical bodies are far away from Earth, while hers is still at the bottom of the lake with the others.

The crew further explain that they’re on a mission to rescue a ship that crash-landed at the bottom of the lake and that the dreamscape that Holiday and the others had been experiencing was actually just a cover for the excavation of said ship. Furthermore they explain that they’re from  the planet Lyrus, known to earthlings as Venus. They observe the Earth, charting Climate Change and other phenomena. After showing Holiday the planet, the crew make an offer that shocks her. 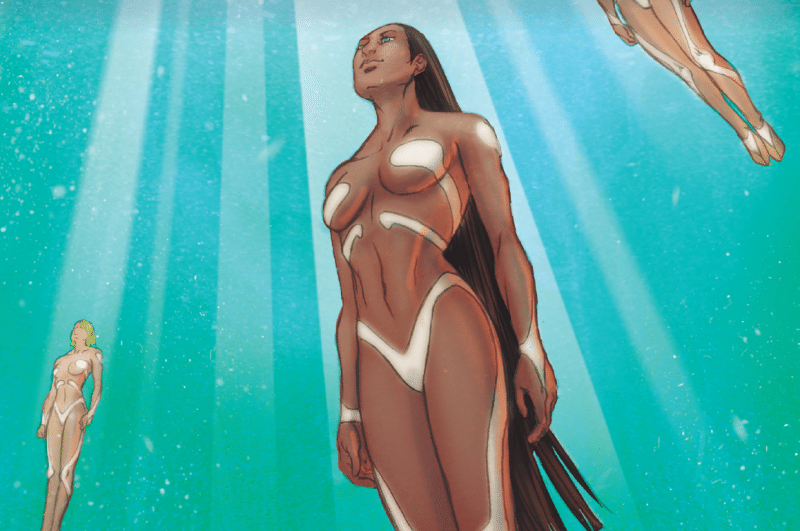 While the earlier issues of SPRING were relatively out-there, the fourth issue takes things to another level. The entire concept behind Earthwatch is an interesting one, and certainly broadens the overall scope of the Double Take Universe. I particularly liked the idea of Venus actually being an inhabitable planet, and that the poisonous gas-filled climate familiar to humans is simply a disguise to fool NASA. Overall, the plot answers some of the questions that readers have had since SPRING began, while at the same time still keeping things very mysterious. Jemas and Greenbaum’s script, from a credited Jemas/Heller story, gives just enough details to keep me invested in the story while still keeping enough under wraps to maintain the trippy and strange nature of the series. The tone of the issue doesn’t lend itself to much characterization work, however there is a familial development for Holly at the end of the issue that should provide for some interesting developments going forward.

Artistically I liked the book a great deal. In addition to the story credit, Heller provides layouts with Santacruz providing the finished pencils. The former employs some very intriguing page and panel structures, including great double page spread in the middle of the book that shows the interior of the Demeter ship. Colorist Sandra Molina adds a great deal to the book as well. The bright color palette really jumps off the page and adds to the other-worldly nature of the story. The only major complaint I have with the art is that some of the pages, particularly in the issue’s second half look somewhat rough and unfinished.

SPRING #4 shows that there’s a lot more to Double Take than zombies based on an old film. I would recommend it to anyone who likes space-age psychedelia or those who enjoy stories that don’t provide easy answers.