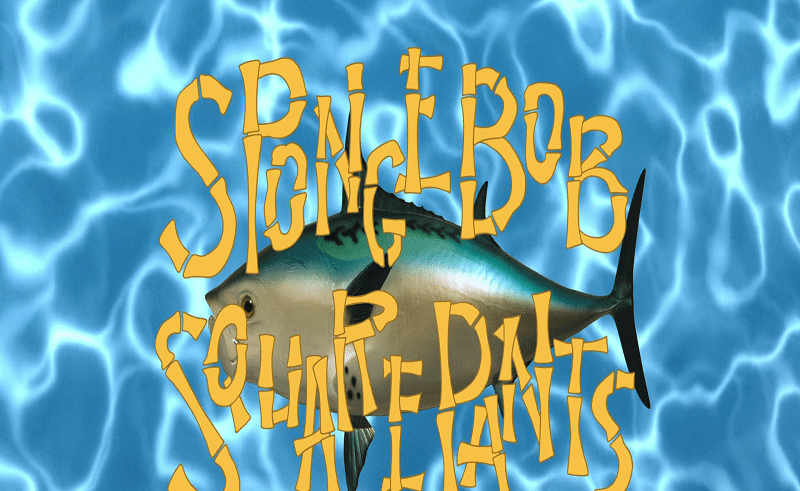 Most of us know SPONGEBOB SQUAREPANTS. The happy-go-lucky yellow sponge, with his dedication to fry cookery and merriment, captured hearts all over the world since his premiere on May 1, 1999.  Fans of the show can no doubt recollect a moment from the earlier seasons that had them, at the bare minimum, smiling. Maybe it was CHOCOLATE WITH NUTS, with the psychotic chocolate fiend chasing Spongebob and Patrick, or BAND GEEKS, with its epic Van Halen tribute at the end — there was a moment for everyone.

Then, the first movie came out. It received largely positive reviews and all of the old humor, tone and general mischief that made SPONGEBOB SQUAREPANTS such a successful cartoon was present, as well as better animation and more vibrant art. All things considered when it comes to cartoon-movie spin-offs, it was done exceptionally well. However, after the movie premiered SPONGEBOB SQUAREPANTS seemed to take a sudden turn. It was the opening of Season 5 of the show, and many of the old writers had left to pursue other projects for the time being. New writers joined the remaining old and continued on the sponge’s legacy with an oddly dark new tone.

Granted, it is still a cartoon about the adventures of a yellow sponge and his compatriots that live under the sea. Yet, Season 5 started producing episodes with bizarre tones and more adult humor that wasn’t quite as funny as the writers seemed to hope. Spongebob had been an innocent character that loved his friends, his job, and always approached things with a positive attitude. His days were filled with loving every moment of flipping Krabby Patties and jellyfishing with his bestie Patrick. Now, he has become a character that is, in short: immature, annoying, a stalker, a bad pet owner, and, yes, even a total psychopath.

CLICK: What makes cartoons mature? Check out our article on maturity in shows like YOUNG JUSTICE and THE LEGEND OF KORRA!

First, what is a psychopath? It should be noted that psychopathy is often misinterpreted in the media. A legitimate psychopath is not just an axe-wielding serial killer or a clever Bond villain that seems to lack empathy. An accurate portrayal of a psychopath would be Anton Chigurh from NO COUNTRY FOR OLD MEN: a hit man that loses no sleep over his actions and operates under his own bizarre logic. Here are some of the symptoms of a clinical psychopath:

So how well do these apply to our favorite sponge?

Let’s take a look at some examples from episodes that aired in Season 5 and beyond, excluding GOOD NEIGHBORS, which aired during Season 4 as episode 4. Some of the new writers had begun to take over by then, and GOOD NEIGHBORS was the episode most fans point to when they try to pinpoint where things started to turn nasty.

GOOD NEIGHBORS is an episode where Patrick and Spongebob annoy Squidward to the point of insanity under the mission of being, well, “good neighbors”. Their efforts include breaking into Squidward’s home, stealing his foot massage service, and generally ruining his entire Sunday off with one shenanigan after another. Granted, it’s not the first time that these two have annoyed Squidward, nor is it the first time Squidward has been on the raw end of the stick in an episode, but it was a definite turn around from what used to just be innocently trying to bond with their grumpy neighbor. Even after Squidward screams at them about how they have ruined his day and are awful neighbors, their stupidity continues on and Squidward ends up losing his home and his one day off. OK, so maybe that was just a dud. Every good show has a dud now and again, right? Though one can argue that this seems pretty uncaring.

Well, let’s go next to SQUID’S VISIT. This is another instance of Squidward just wanting to enjoy time to himself that is broken down by Spongebob literally throwing a tantrum because Squidward doesn’t want to pay him a house visit. Because Squidward won’t pay him a visit, Spongebob steals his vacuum cleaner and leaves him a note that he “borrowed” it. Squidward ventures over for his property only to find that Spongebob has recreated his home to look exactly like Squidwards’. Down to the tiniest detail. And the episode doesn’t play it off for laughs, either. They have music that would be at home in a horror movie and show Squidward slowly losing his mind as he tries to navigate his way out of this mirror Hell of his one refuge. The episode even ends with Squidward having a complete mental breakdown and, once again as in GOOD NEIGHBORS, losing his home.

While there is some dark humor attempt in there, the implications are not all that charming. At this point in the series, they are implying that Spongebob has broken into Squidward’s home enough times that he can perfectly replicate it. Dark humor like that might work in Ren and Stimpy, but with a character that has been established as being essentially harmless and only wanting his neighbor’s friendship it is jarring, at best. His lack of guilt for stealing the vacuum or causing Squidward’s meltdown seem to represent the shallow emotions psychopaths often feel.

Click: Want to read more about choice and the Crystal Gems? Check out our article on STEVEN UNIVERSE!

As the seasons went on, Squidward being at the center of misery became such a running gag that some internet personas coined a term for these episodes: “Squidward torture porns“. And there are a considerable number of them. These are only two out of the more than twenty episodes that feature Squidward being put through some misery at the hands of the yellow crusader or his pink starfish friend. This might sound low over four seasons, but it is the commonness with which it now appears that makes it disturbing. Squidward being tortured has become as much of a theme as Mr. Krabs being greedy was, and is, except it’s not charming in the slightest. Viewers don’t tend to want to see a character being tortured for no reason. In earlier seasons, Squidward could be a selfish jerk and he’d get his comeuppance or some bad luck. Even the worst of his trials were usually just because Spongebob and Patrick wanted to do something nice for him.

BOATING BUDDIES – Spongebob stalks Squidward, forces him to crash his boat, ruin his perfect traffic record, and be stuck in boating school with a clingy, creepy Spongebob. The episode ends inferring he will be stuck there forever and in a full body cast from a beating he received while trying to flee Spongebob. Irresponsibility and Violence (even if the violence wasn’t at the direct hands of Spongebob).

CHOIR BOYS – Spongebob relentlessly follows Squidward while the poor artist simply tries to get to a choir audition. Doing everything from annoying him to physically tripping him up and trying to hold him as a self-proclaimed “captive audience”, Spongebob further sticks it to Squidward by winning the coveted spot on the choir Squidward had so desperately wanted. Violence.

CEPHALAPOD LODGE – Spongebob and Patrick get Squidward kicked out of his beloved club because they couldn’t contain their curiosity about why he looked happy. Selfishness.

DEMOLITION DOOFUS – Spongebob literally cripples Mrs. Puff by driving dangerously, then proceeds to be about as glib and uncaring about it as possible, showing no shame, guilt or embarrassment. He even goes so far as to claim that she “looks better this way”. Insincere speech.

There’s so many more instances where the yellow sponge we all used to know and love has committed atrocities. A PAL FOR GARY is especially hated for its depiction of Spongebob being a vapid idiot and bringing home a murderous monster to keep Gary, his beloved pet snail, company. Even with the monster attempting to devour his pet in front of him, Spongebob still scolds Gary for “being rude” to their new friend, despite the snail fighting for his life all night.

The focus of Spongebob’s psychopath behavior often tends to be directed at Squidward, with Patrick serving as a just as bad, if not worse, influence and replicating many of the same behaviors to a much worse degree. Patrick is more prone to violence, shallow emotions, irresponsibility and selfishness than even Spongebob has proven to be. Despite how ruined he has become, Spongebob seems to be almost clueless about the harm he causes while Patrick hides behind the excuse of stupidity, going as far as nearly karate chopping a baby in half (KARATE CHOPPERS) and pulling a flamethrower on Gary (PET SITTER PAT). Together, he and Spongebob have been reduced to infantile idiots who constantly torment Squidward and others around them, cry over every small thing and generally act like either spoiled children or apathetic jerks.

SPONGEBOB SQUAREPANTS has become a show with a confusing sense of morality and dark humor that, unfortunately, isn’t typically very funny. This isn’t even to say that all of the post Season 4 episodes are bad. Many of them are thoroughly enjoyable, but the problem isn’t with the episodes. It is with this bizarre new depiction of a once beloved character. Whether he is acting apathetic or glib, annoying or tormenting others, or behaving like an irritated child, this Spongebob just isn’t the same. This Spongebob is written like a psychopath: unable to realize when he is hurting others, or just not caring, irresponsibility, immaturity, selfishness and all out amoral.